Back in 2003 I found myself in the Carolinas on a whim. I had taken a semester off from my schooling in New England, and decided I needed a change in scenery.  By November of 2012 I had decided on the coast of South Carolina, and by the first week in January, my car full of all of my important belongings, I found myself there.  The Carolinas, particularly the low country, became my home.  Sweet tea, hush puppies, and heavy doses of Southern hospitality would become constants in my life…at least temporarily.  For another constant in my life is the yearning desire to roam, so I eventually found myself a thousand miles away from the Carolinas once again.

As mentioned in my All American Marathon recap, about two months ago I received an email from the Fayetteville, North Carolina Area Convention & Visitors Bureau, asking if I was interested in coming down to run the race & check out the city of Fayetteville.   On my countless trips traveling down I-95 Southbound, I have passed through Fayetteville, yet never stopped to look around.  To add compelling interest to “reasons to accept the invitation” list, Geoff had been stationed in Fayetteville at Ft. Brag many moons ago (20 moons, to be exact).   The decision wasn’t difficult to make, and before we knew it, we were headed to Fayetteville.

The drive South was slightly stressful, as we encountered snow from New York all the way to Northern Virginia, but it was all worth it when we stopped at the North Carolina welcome center to see grass.  Beautiful, green, lush grass. And flowers!  The things Vermont “winter has gone on to long” dreams are made of.

Before too long we arrived and checked in at the new Fairfield Inn & Suites (Fayetteville North).   A neon blue, brightly lit and modernly decorated lobby greeted us followed immediately by the greetings of the friendly staff.  By coincidence, we were given a large handicap accessible room; the number of hand grips and safety bars spread around would become incredibly useful post marathon.

After a quick change and a check of the GPS, we hopped back in the car to head downtown.  Fayetteville as a whole is very spread out, but the major roads and highways are relatively easy to figure out, making everything easily accessible.  Our hotel was a quick 5 minute drive from downtown, and we were always able to find ample and easy parking.

One of my favorite parts of traveling is checking out the local cuisine.  I am by no means a foodie, but I do love to eat.  We had the pleasure of meeting up with Melody, from the Fayetteville Area Convention & Visitors Bureau, at  Sherefe Mediterranean Grill, a restaurant located right downtown.  Sherefe (pronounced “shedefay”) means “Cheers!” in Turkish, and in addition to having a beautiful dining room and upbeat atmosphere, had a wonderful menu full of fresh, Mediterranean dishes. I dove straight into a massive, delicious Greek salad topped with falafel.

After dinner we headed over to the race expo, then found ourselves back downtown, as it was still relatively early and we had a new city to explore.  A friend who frequents the area recommended we check out Huske Hardware House restaurant and brewery.  The place was busy (as it should be on a Friday night) but we were able to find a spot at the bar.  As mentioned above, when visiting new places, it’s great to try local cuisine…but it is imperative to try locally brewed beers.  Huske regularly carries five made in house brews, as well as one or more seasonal brews.   Over the course of the weekend, we managed to “sample” 5 of their brews, with my favorites being the Hay Street Helles and Saison de Huske.

Saturday morning we took full advantage of the hotel’s continental breakfast along side of dozens of women in town for some sort of convention.  There were so many “bless your hearts” and “ya’ll” s being thrown around that I could hardly contain myself.  I know it sounds ridiculous and silly, but I miss hearing the Southern accent on a regular basis. Despite the crowd, the hotel kept the food coming.  Eggs, fresh fruit, bagels, cereal, pastries, waffles, and more.

After we stuffed ourselves full, we headed back downtown to check out a local farmers market.  Vendors were selling all of your traditional market goods (fresh vegetables and fruits, eggs, artwork) as well as some not so traditional items, such as coffee and breakfast pastires, immediately making us feel guilty for having JUST gorged on the continental breakfast. Regardless, we picked up a few treats to bring home, including FROG jam (figs, raspberries, orange, and ginger) from Faith Farms, and a bar of homemade coffee soap from Cynthia’s Southern Luxuries.

After the farmers market, we headed over to a “must see” attraction in Fayetteville, the Airborne and Special Operations museum.  The museum highlights the early days of the Parachute Test Platoon to the current ongoing War on Terrorism.  Fayetteville is the home of Ft. Bragg, the largest Military instillation in the United States with over 57,000 troops.   Ft. Bragg is also home of the Airborne and Special Ops division, so it is only fitting for the museum to be located in Fayetteville.

The museum is obviously a highlight for both history and military enthusiasts alike; I however, would describe myself as neither of those, and I still really enjoyed my time in the museum.  I think, especially in the digital and technology age, there is a large disconnect between what we see on a screen (TV, computer, etc) and what is happening, or has happened, in real life.  Seeing so many artifacts first hand from various wars and conflicts our military has been involved in really helps put things into perspective, and makes you appreciate even more than you may have before the selfless sacrifices our military personnel make every single day for our freedom. One of the immediate displays we viewed was Task Force Ranger and the Battle of Mogadishu Exhibit.   Last fall Geoff and I participated in our very first GoRuck, which was on the anniversary of Mogadishu conflict, so it was interesting – and sobering – to learn more and see actual artifacts from this event that we had spent time learning about.

Super 61 rotor, from the first helicopter crash during the mission.

The main exhibit details the history of the airborne troops from World War I to current Special Operations forces.  What was most fascinating to me was the fact that many displays held equipment and artifacts not only from our military, but from that of other countries as well.  And then of course were items from monumental historical events, such as this map below, that jumped into Normandy on D-Day.   In my opinion, seeing items like this map, or actual weapons and attire that were used during battles, are such a shocking reminder of our history, far more provoking than any book or picture could ever recreate.

We spent at least two hours exploring the museum before our stomachs began insisting we leave and find some lunch.  So we headed down the beautiful cobblestoned Hay Street to see what the day had to offer.

We wound up at a restaurant called New Deli, which had a near overwhelming menu of amazing fresh food.   And not only was the menu massive, but it was ridiculously affordable.  Between the two of us we got a grilled cheese and tomato soup, two vegetarian friendly Panini’s (Geoff was really hungry), potato salad, pasta salad, two drinks, and some amazing chocolate dipped strawberries…all for $25.   That would have likely cost twice as much up here in Vermont.

Next it was time to work off some of those lunch calories (but not too many, we were pre-marathon carb-loading).  What’s more, the sun was shining and the temperature HAD to be in the high 60’s, so these Vermonters NEEDED to get some fresh air and a dose of sunshine-induced-vitamin-D.   It was time to hit the trails.

One of the hilarious things about traveling is the fact that you don’t know what you are doing 90% of the time.  Truth be told, not knowing is half of the adventure.   I searched the internet and decided on the first trail system I found, which was relatively close to our hotel.  The J. Bayard Clark Park is Fayetteville’s second largest regional park, and intersects the Cape Fear River and Cape Fear River Trail.  It was indeed beautiful, but was surprisingly tiny.   Though that could be my Vermont talking, and forgetting that we were in the middle of a major city.   I think we somehow missed the actual Cape Fear River trail, which is a part of the East Coast Greenway, an urban alternative to the Appalachian trail. Regardless, we hit up the longest trail – 0.6 miles – to stretch out our legs and enjoy the sun.

If you are visiting Fayetteville with little ones, there is a Nature Center at Clark Park that offers a large number of nature and outdoor programs, as well as a massive playground.  Unfortunately this late on a Saturday afternoon, the nature center was closed.  But I did get a photo op with their front door man, Sasquatch. 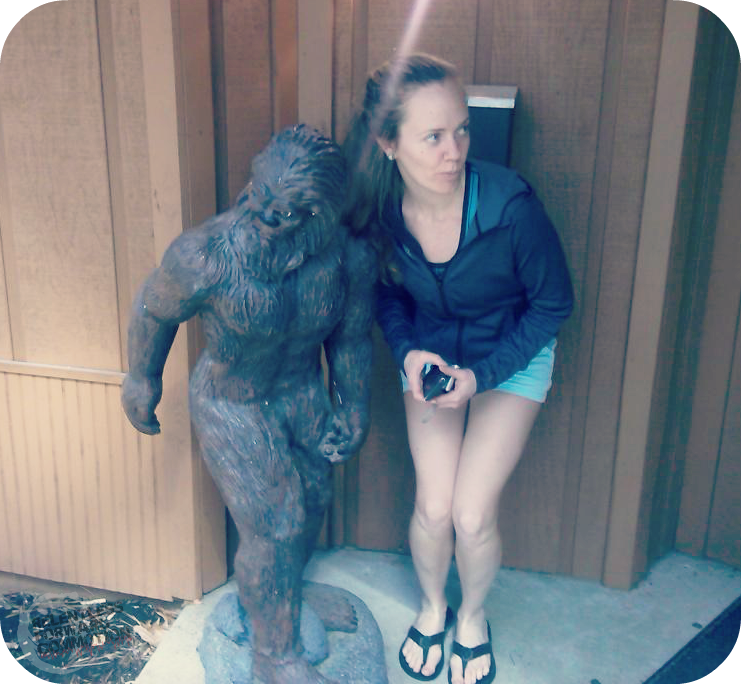 After our time on the trails, we regrouped at the hotel and then headed back into town for the pre race pasta party, a quick pint at Huske Hardware House (clearly we had become fans) and off to bed before the big race. 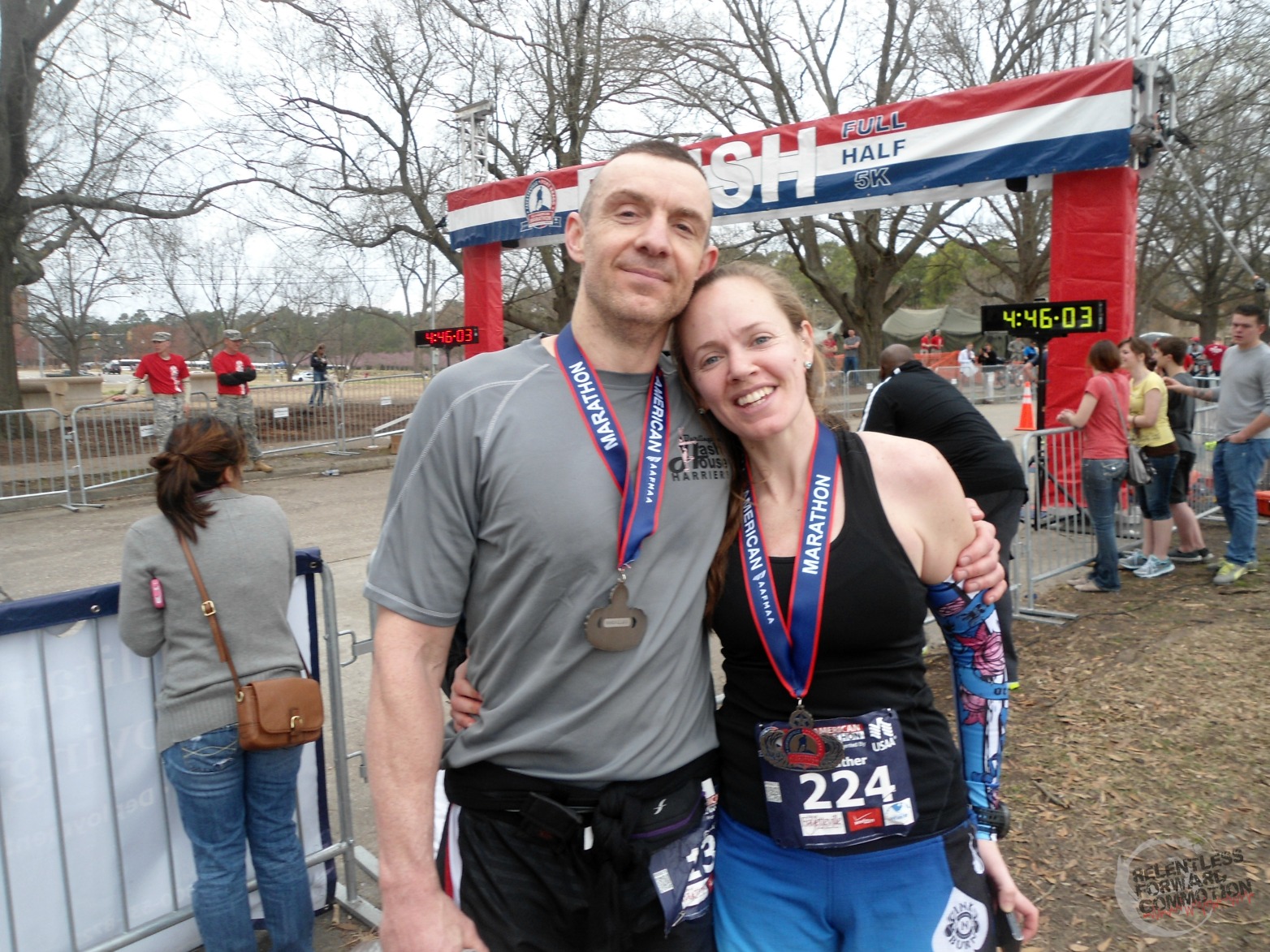 Though our time in Fayetteville was short, it was never without adventure and entertainment.  The long list of things we weren’t able to check out on this trip include (but aren’t limited to!) the 17 Cultural Heritage Trails, ZipQuest treetop ziplining, and nearby Paraclete XP indoor skydiving and Cape Fear River Adventures.   In short, Fayetteville has a little bit of something for everyone.  If you are considering traveling from out of town for the All American Marathon, don’t hesitate to add a few days to your stay to discover all that Fayetteville has to offer!

Once again, thank you to the city of Fayetteville for your wonderful hospitality!

*Disclaimer* Accommodations and some meals were provided to us at no charge, however, all opinions stated are my own.