Since I’ve changed my focus to races that are outside of the norm and off the beaten path, I’ve had a lot of people ask me about color runs.  It seems there are mixed opinions about the validity of such a “race” (not hardcore enough for the OCR crowd, and just plain silly for the road racing crowd), so much so that it was even the topic of the Editor’s Letter for the June 2013 issue of Runner’s World.   (I know, I know, can’t we all just get along?) While the editor, David Willey, seems to think the color run is a passing fad, just like obstacle course racing (I’ll hold my opinions), there is no denying the immense popularity of the color runs that have burst onto the scene (no pun intended).  I for one, think color runs are a fantastic idea for getting people off the couch, becoming active, and having FUN.   But the truth is…I’ve never run one.  So while I can give you generic tips, I thought it would be fun to hear from someone who has experienced a color run.  While you are reading this, I am Pittsfield, likely covered in mosquito bites, so I’m handing it over to Sylvia.  Enjoy, and I’d love to hear your opinions/thoughts/questions/concerns regarding color runs in the comments below. 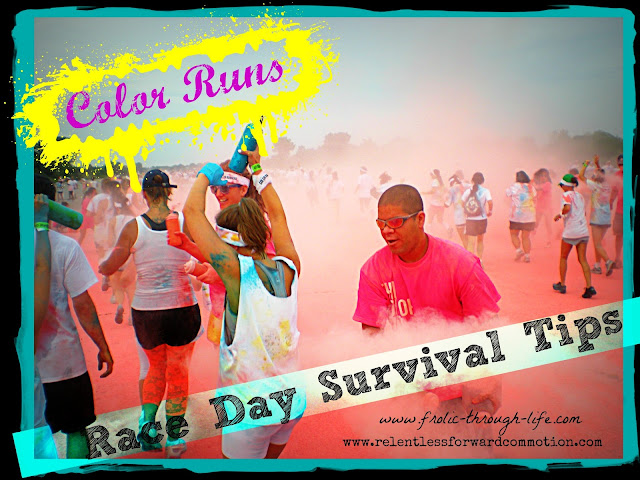 Hello! My name is Sylvia and I blog at Frolic Through Life. While Heather is volunteering at the Spartan Death Race (so badass!) she asked if I could tell you guys about my experience with the Color Run and share some tips on how to survive your first one! 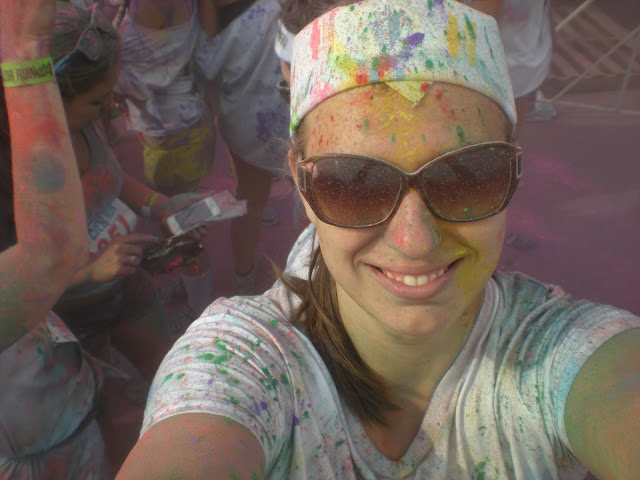 I did my first color run last year and had a total blast! I am planning on doing Run or Dye this fall, so keep an eye out for my review of that if you’re interested.
Survival Tip #1.Run with a group. When I did the run last year, I tried to get a team together, but for one reason or another, we ended up only being a team of two. It was fun, but the more people you can get, the more fun it will be. There were teams that went all out and made costumes too, which was a lot of fun to watch. Definitely a tutu race, if that’s your thing!
Survival Tip #2. Wear as much white as possible. I wore a white t-shirt, but stuck to my trusty black capris. Even though the after effect was cool, it would have been that much better is I had worn more white. I loved white knee socks and I’m planning on those this year.Survival Tip #3.Take before pictures. It is fun to look back at how clean you looked at the start compared to the end. 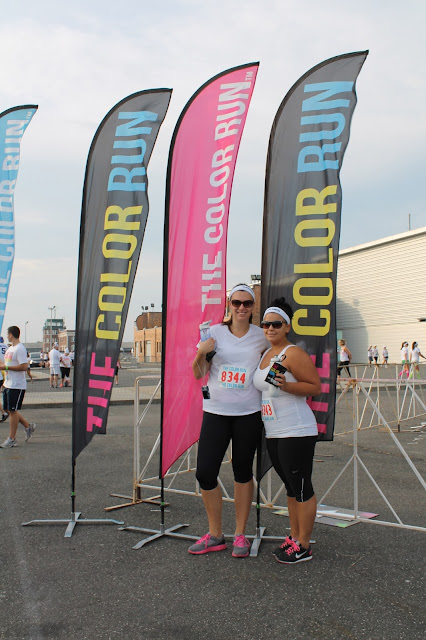 Survival Tip #4.Be prepared to walk. Even though they are called color runs, there are a ton of walkers, people with strollers, young children, etc. Most of the people at my event walked in groups, especially through the color stations. In some spots it was hard to get passed the walkers, so we had to walk too.
Survival Tip #5. Decide how colorful you want to get.  At most runs, there are high color lanes and low color lanes. If you want to get really colorful, go through the high color lanes. The volunteers will make sure you get nice and colorful, and if you stay away they will respect that. Even though the website will say that the color will wash right off, it isn’t that easy. I had a baby shower to attend on the afternoon of my run, and no matter how much I scrubbed there was a yellow patch on my forehead and some blue on my back that wouldn’t budge for a few days. At least I was able to brag about my run at the party. 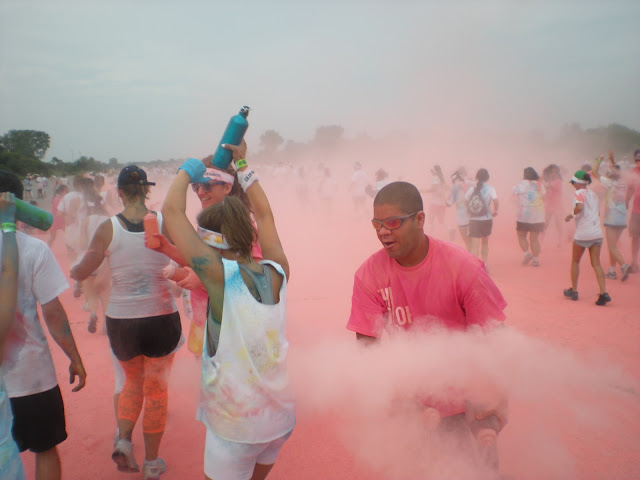 Survival Tip #6.Don’t wear anything you don’t want to get stained. Even though they say that the color comes out of your clothing, not all of it will. I wore a white t-shirt that I intentionally left colorful, by spraying it with vinegar and ironing the color into it, but I also wore a white sports bra underneath that had never returned to its original color. Your shoes may also stain, but I think they look pretty sweet with color splotches.
Survival Tip #7.Sunglasses are a must. If you don’t cover your eyes, you will be miserable! The colored powder floats in the air and will irritate your eyes as you pass through the color stations.
Survival Tip #8.Be careful with electronics. The race websites recommend putting everything in a ziplock bag to keep the colored powder out. I was able to bring my older camera and get some great shots along the course without worrying about damaging it. 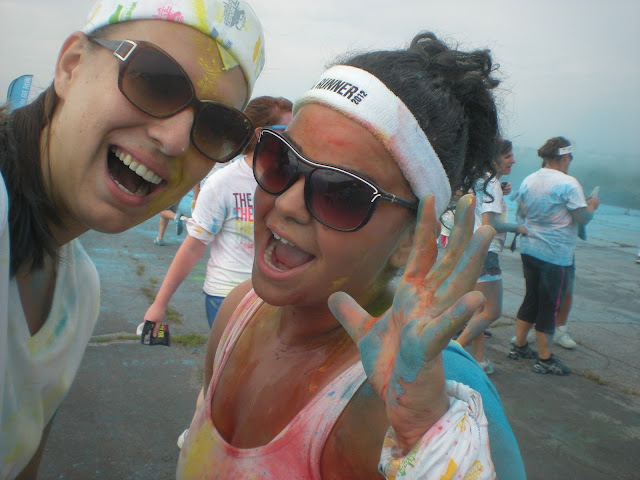 Survival Tip #9.Bring a change of clothes. Even though there are stations where they will blow the color off of you, most of it won’t come off at the race site. To protect you car, I suggest bringing a change of clothes, or at least a towel to cover your seats. My backseat was blue for quite some time! 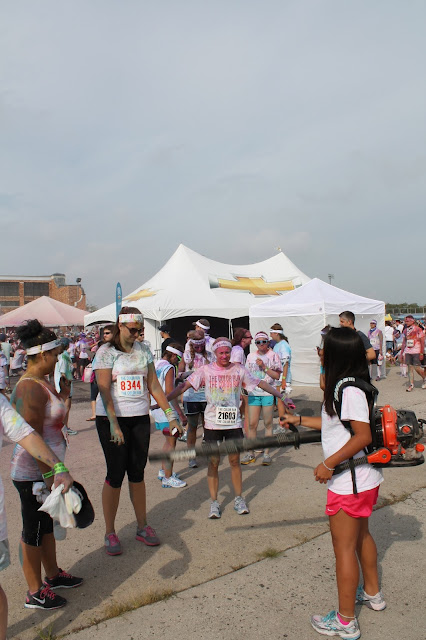 Survival Tip #10.Have fun! This isn’t the type of race that you will PR in. Most color runs aren’t even timed. This is the type of place to get a group of friends together and get silly. Oh, and if your run has a color party at the end, get right in the middle and enjoy! 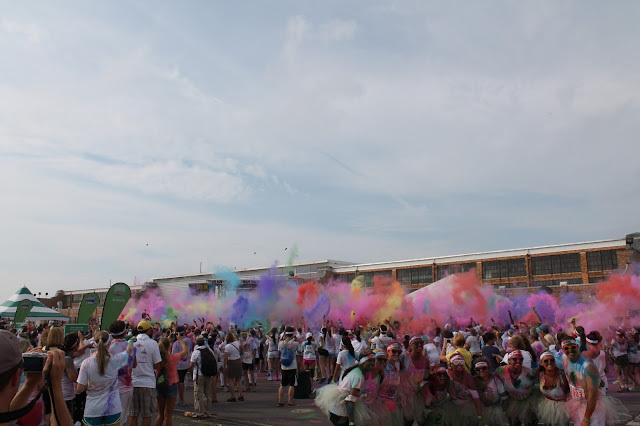 I hope my tips help you in prepping for you first color run! If you think I missed something important, let me know on Twitter of Facebook, or leave a comment below!(Thanks again Sylvia!)