(The Color Vibe to be exact. )

Color runs have come onto the running scene and quickly spread in popularity like wildfire over the last few years. Rainbow, neon colored wildfire.  But their new kid on the block presence has not come without much criticism and mockery from much of the running community.   Many die hard runners scoff at the idea of an untimed 5K with high pricetags, where the atmosphere is more “party” than “race”, and volunteers peg handfuls of colored corn starch powder at you as you run by them.   “Color runs” are considered by some as the antithesis of endurance events, a joke you make with a running buddy when they are slacking on their training. 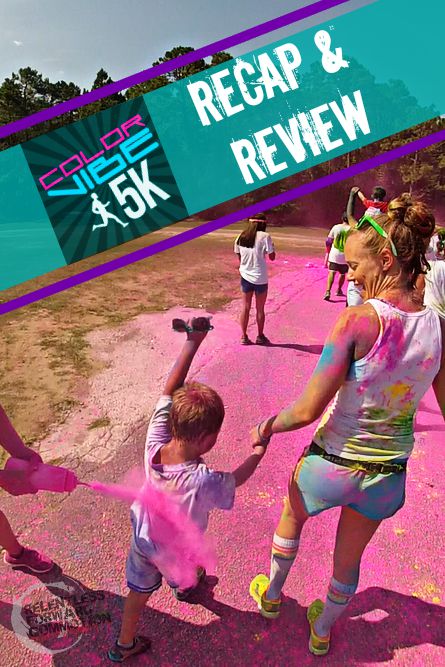 But for others, the surge of color run type “fun” events has proven to consistently provide  a non threatening, non intimidating, fun introduction to both the running world and fitness in general.   An fun opportunity to convince non runners, both adults and kids alike, that this running thing isn’t so bad after all.  In fact, during our color run yesterday, I heard a man behind me declare to the group he was walking with that one day, he’d like to train to be able to run a whole 5K.    I saw hundreds of little kids, including my own, running their little legs off, while parents, adults, and other kids cheered them on for their efforts.

Getting people off of the couch and encouraging healthy, active lifestyles, that’s what it’s all about, right?

Soapbox aside, let’s get to the race.

The Color Vibe had a very interesting registration and pricing system.   Registration cost $30 per adult, or $26 if you were joining or creating a team.  Kids under 12 were free, as long as they were accompanied by a registered adult (up to two free kids per adult).  The Color Vibe opted to do away with all of the “extras” in order to make the race affordable.  Compared to $50+ for other “fun” and color runs, this makes the Color Vibe FAR more affordable.   This is a HUGE consideration for many, especially when you factor in the fact that this race series is targeted at families; when you have multiple children, race registrations add up FAST.

That said, extras were, well, extra.

Adults got one packet of color with their bib, while kids were given just a bib.  (We didn’t purchase extra packets, and instead gave ours to the kids.  Trust me, there is enough colored powder out there for everyone, there really isn’t a need to buy extra unless you really want it.)  If you wanted a t shirt, they were $9 pre-order ($15 day of race), OR, you could buy the “runner combo kit”, which included a t shirt, sunglasses, and The Color Vibe bandana, for $12 pre order, or $25 day of.  $26 for the race + $12 for the kit still puts The Color Vibe at a competitive price compared to many other fun runs. 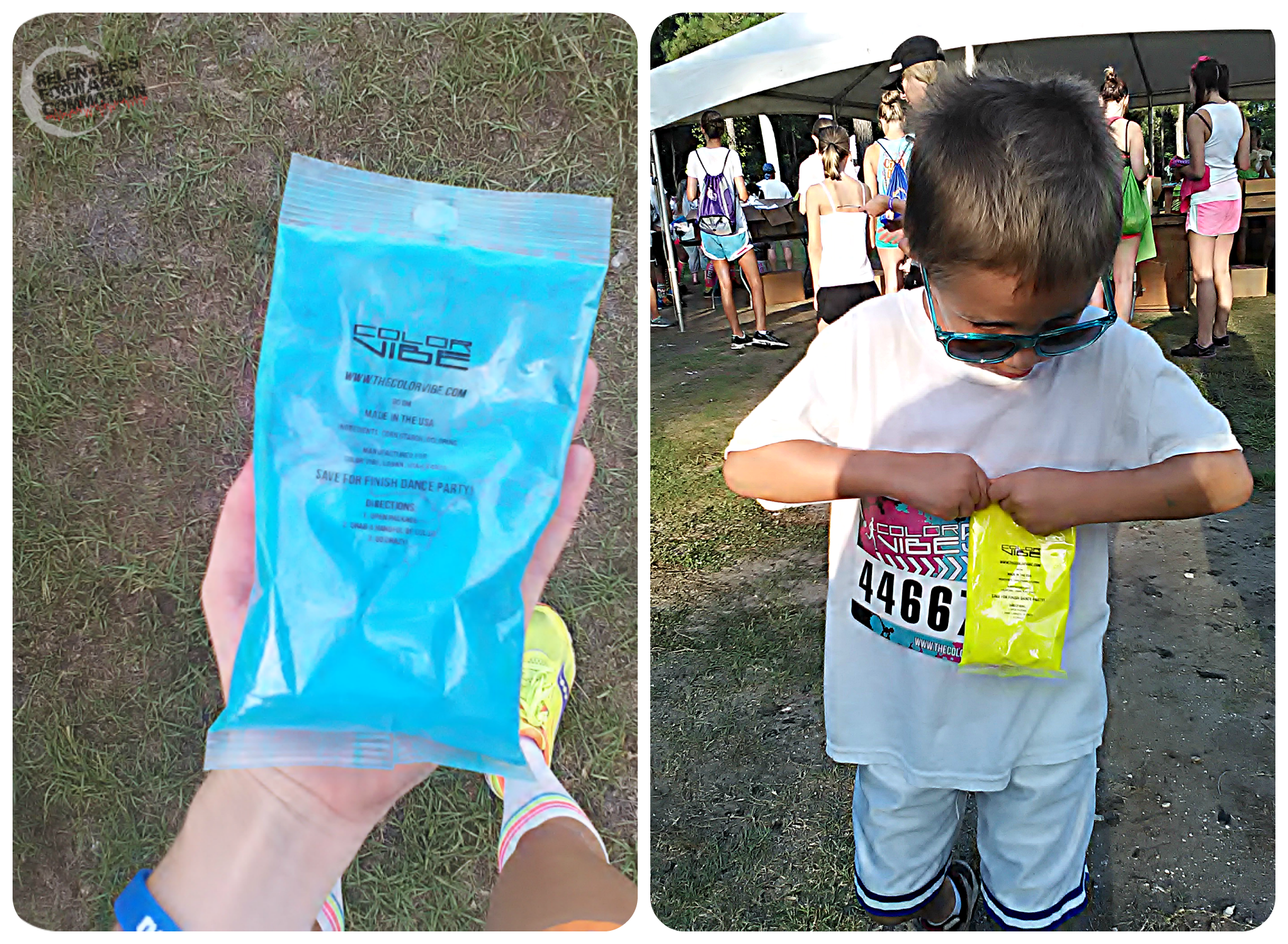 Race morning we showed up to the Myrtle Beach Speedway about 1.5 hours (7:30 am) before the start time of 9:00 am.  Our location provided free parking, however, I did see signs at one of the tents that had either been pulled down or not been put up, declaring parking cost $5.  So I assume this must vary by location, and is likely determined by the venue, not necessarily The Color Vibe.

Registration was fast and smooth.  Later in the morning, the line seemed to be much longer, so it was worth the effort to get there early.  (There was no bib pickup available the night before.)  So we killed a little time after bib pickup by walking to a nearby gas station to buy some Gatorade and snacks.  Mmmm breakfast of champions. 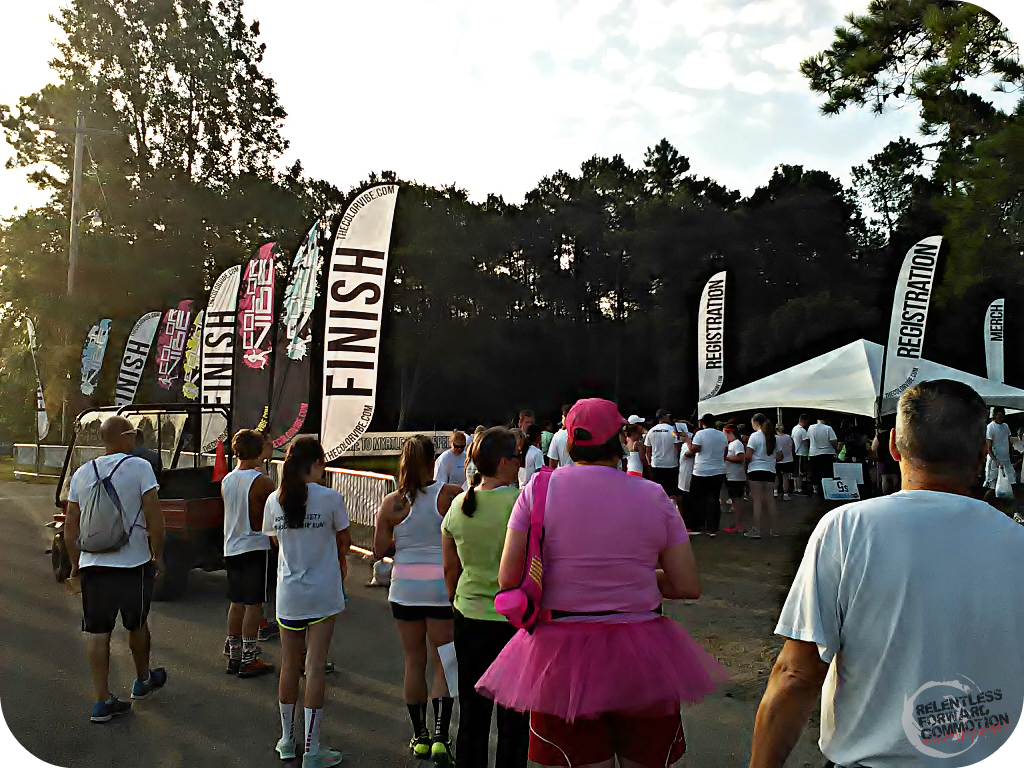 The starting corral was very short, the crowd very large, therefore the line wrapped all the way into the speedway race track.  Though the race was supposed to start at 9:00, the first wave didn’t start until around 9:20.  There was still a large line at the registration table at 9:00 am, so I’m guessing they delayed the start to accommodate those still in line.

But, have no fear, my kids (and everyone else’s kids) seemed to be thoroughly entertained by absolutely covering themselves in the colored powder before even crossing the starting line. 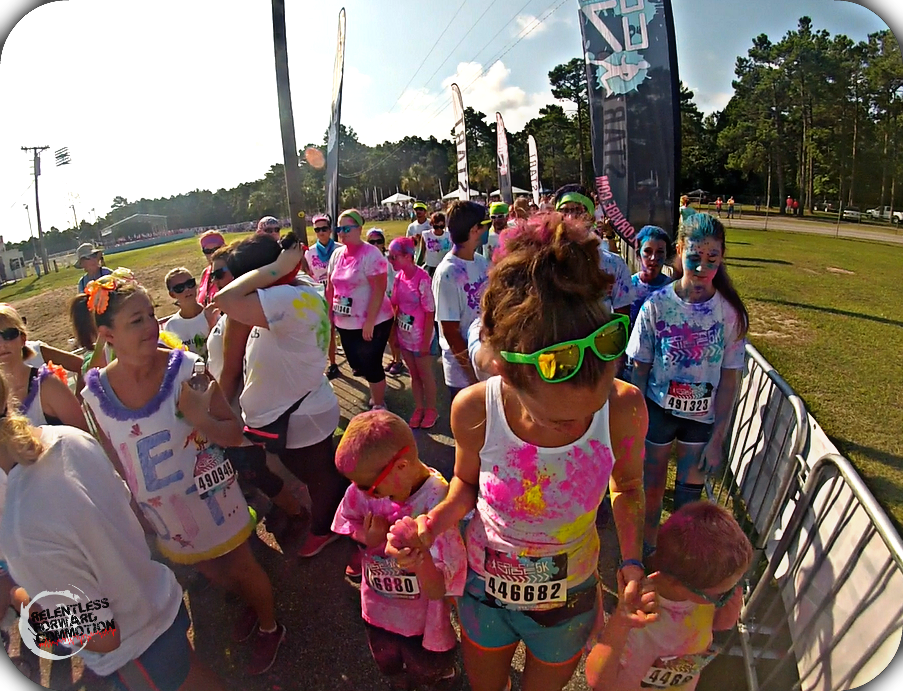 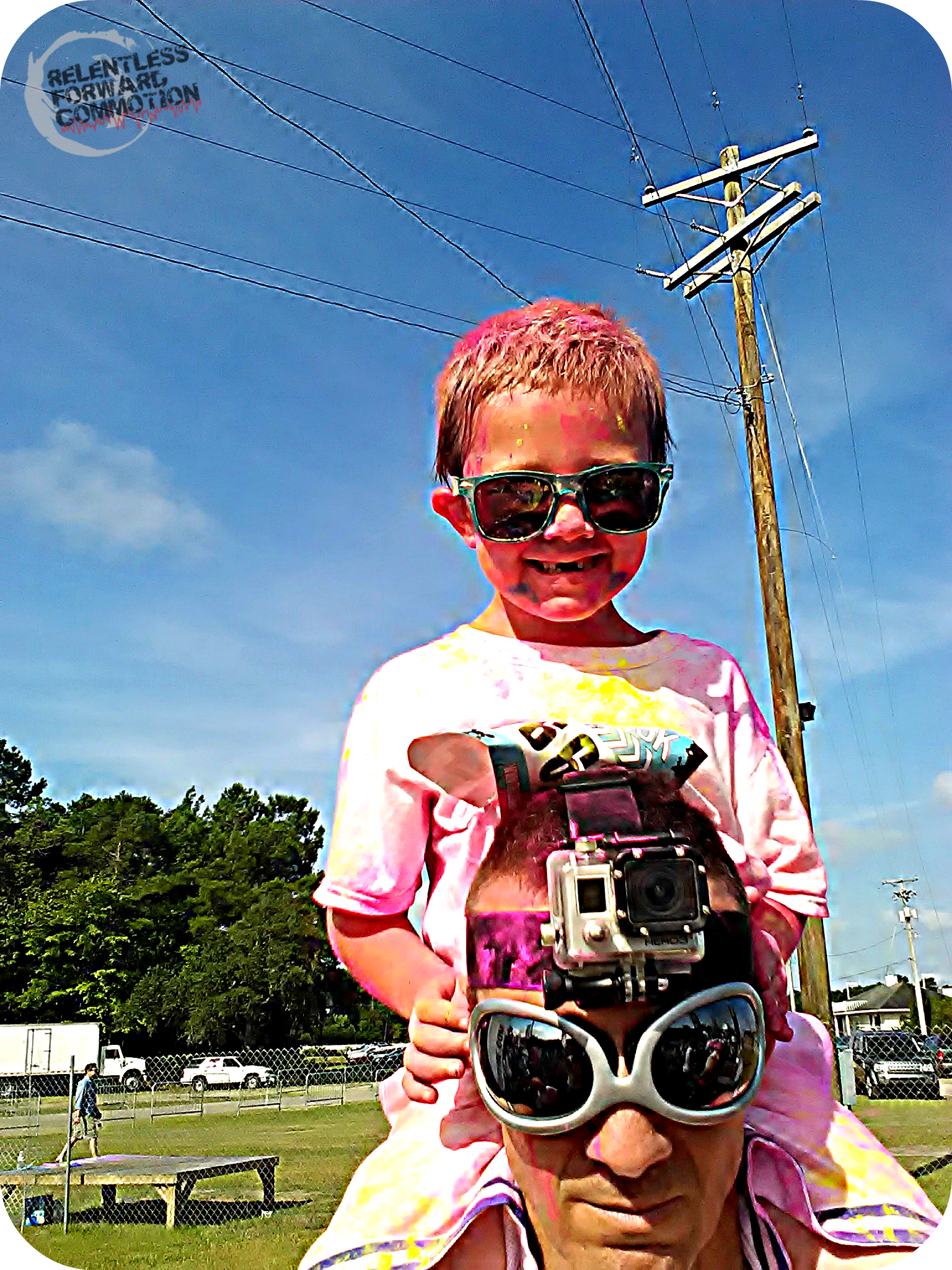 Finally, the first wave went off, then the second, third, and I believe we were in either the fourth or the fifth wave.  Each wave was only separated by a few minutes, but enough to give everyone room to run.  With a quick countdown from the announcer and a “GO!”, we were off.  We ran through a huge cloud of purple color that was being shot with what appeared to be leaf blowers. 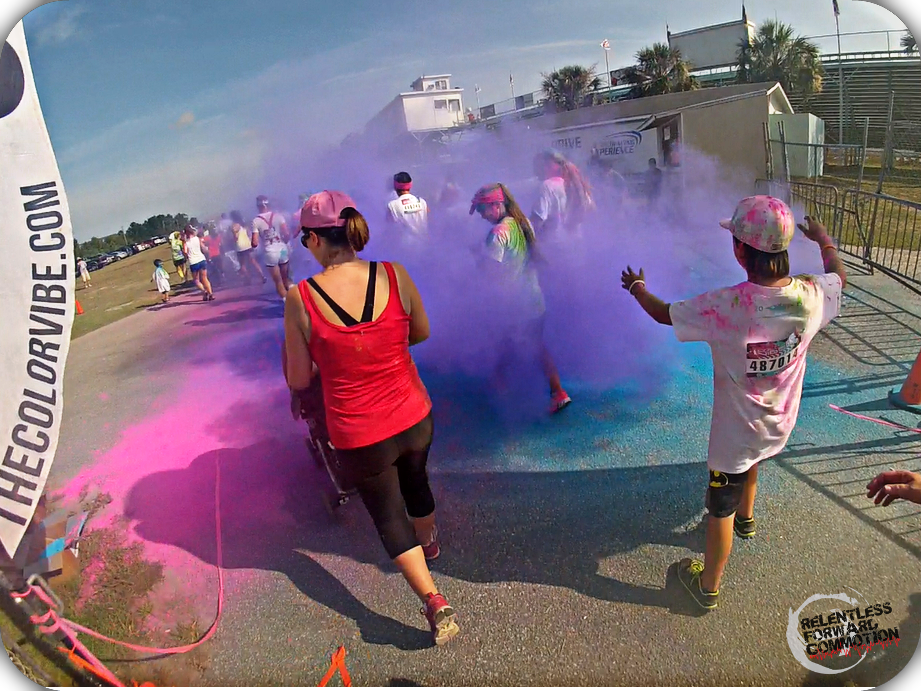 Immediately, we had a little kid crisis…actually a string of them.  The inside of Rowen’s glasses were coated in powder, then Kain lost a pin to his bib, then Rowen somehow got powder IN his eyes.    Rowen (8) decided this running this was way too hard (to his credit, the temperature was already in the mid 80’s and climbing).  Kain (6) wanted to run, so Geoff took off following him.  The kid surprised us all by running 95% of the race, passing countless people on the way.  Who knew?

The course did a lot of winding back and forth across the Speedway property.  It was clear they were trying really had to get an entire 5K out of that small piece of land color stations were spread out throughout the race course.  But this didn’t seem to phase the crowd in the slightest, which was mostly made up of walkers, run walkers, and a lot of little kids. 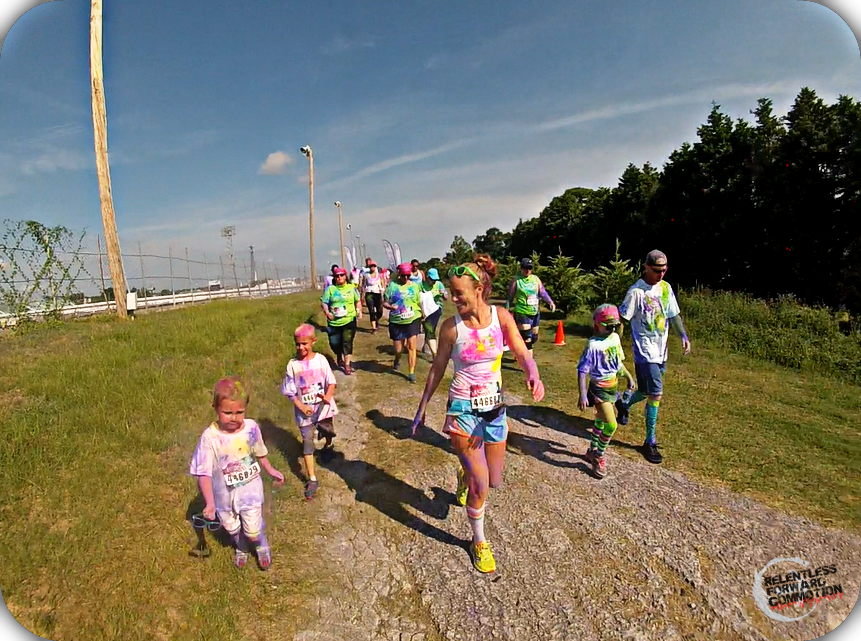 Every half mile or so was a color station.  The color station consisted of a few volunteers with squeeze bottles or handfuls of colored powder.  The volunteers were really good at covering the adults thoroughly, while aiming low on the little ones, to ensure no one was taking a face full of powder. 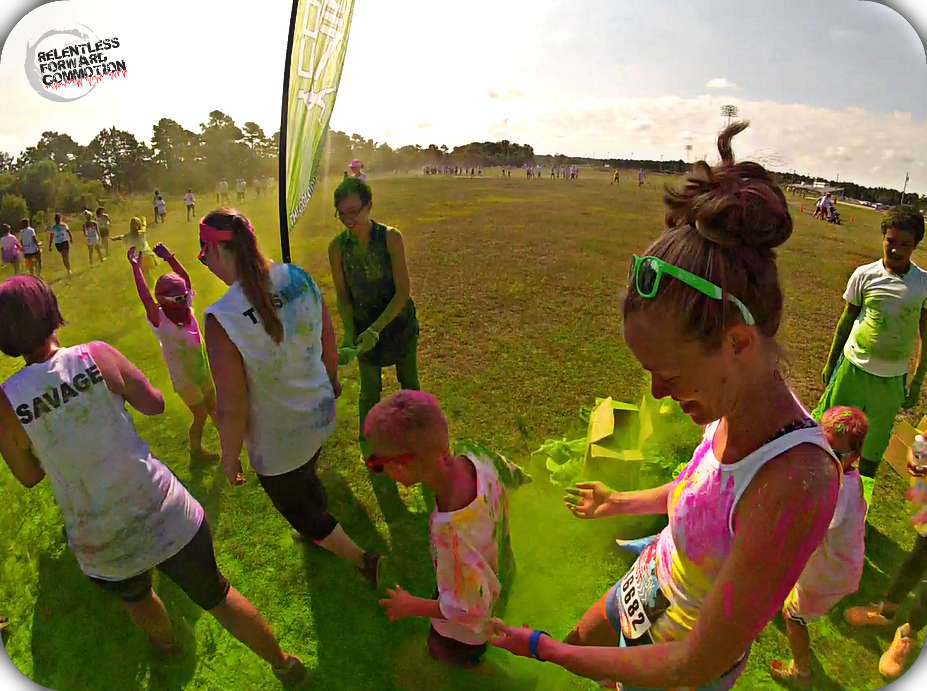 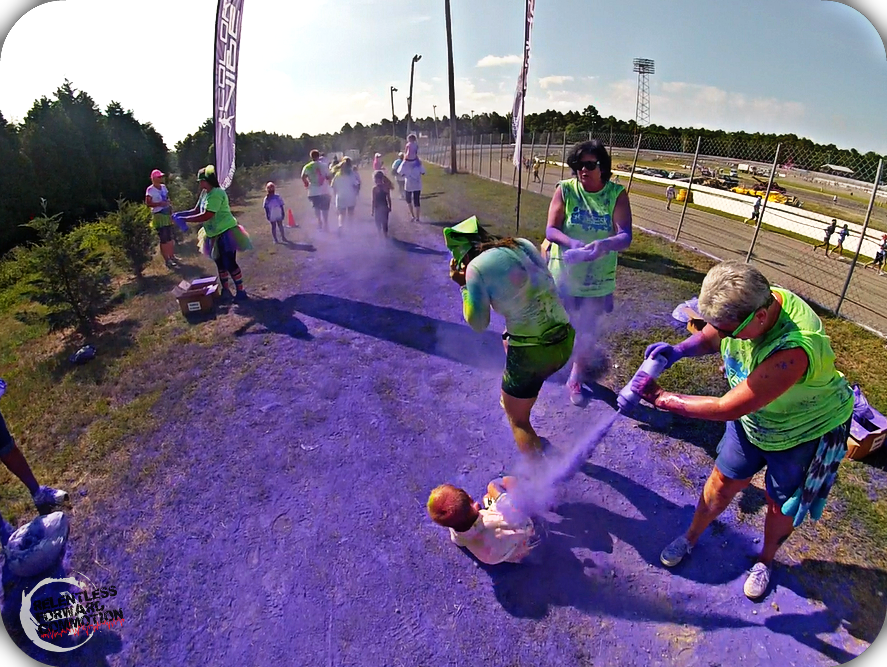 Kain saw a girl in front of him roll through the color station, so he took it upon himself to do the same.

Eventually the course wound around the corner and entered the race track, where the course would do a few laps around the track in alternating directions.   It was incredibly hot, and my oldest little one was already feeling some heat exhaustion. Thankfully at this point, we encountered the water stop on course.  Again, the volunteers were fantastic, and encouraged us to take more than one cup if we were really thirsty. 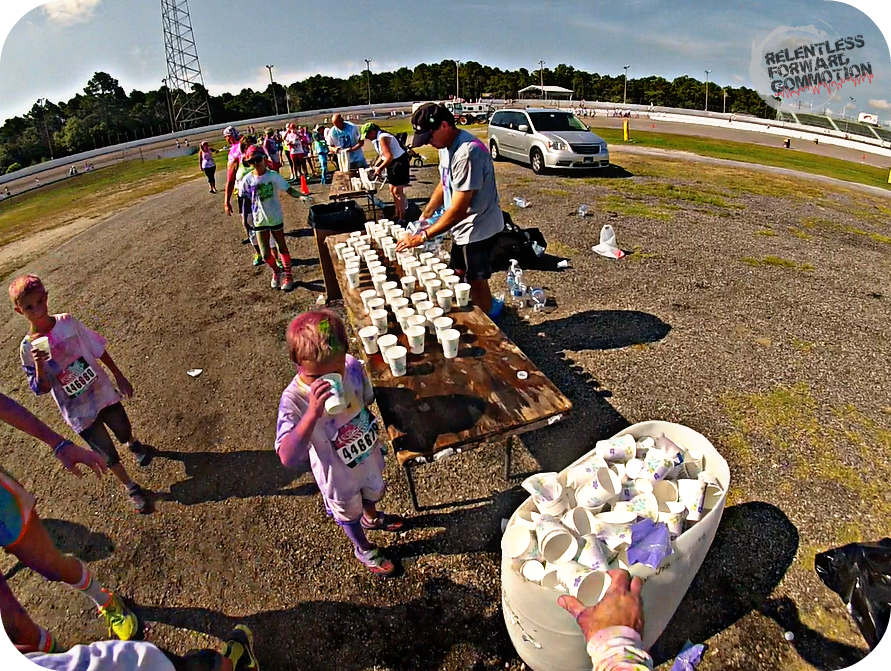 Personally, we did one of the two laps, before deciding to cut our race about a half mile short.  As mentioned earlier, it was incredibly hot, and a little too much for the little ones to handle that morning.  In the spirit of still keeping this running thing a challenge, yet still “fun” for them, it seemed like the best decision.  And we weren’t alone…many other families with little ones were doing the same.   With the last mile and a half on the unshaded, paved race track, it was incredibly hot.  Normally, I would be totally against course cutting, but this was an untimed fun run with no finishers awards; so the little guys health and safety came first. 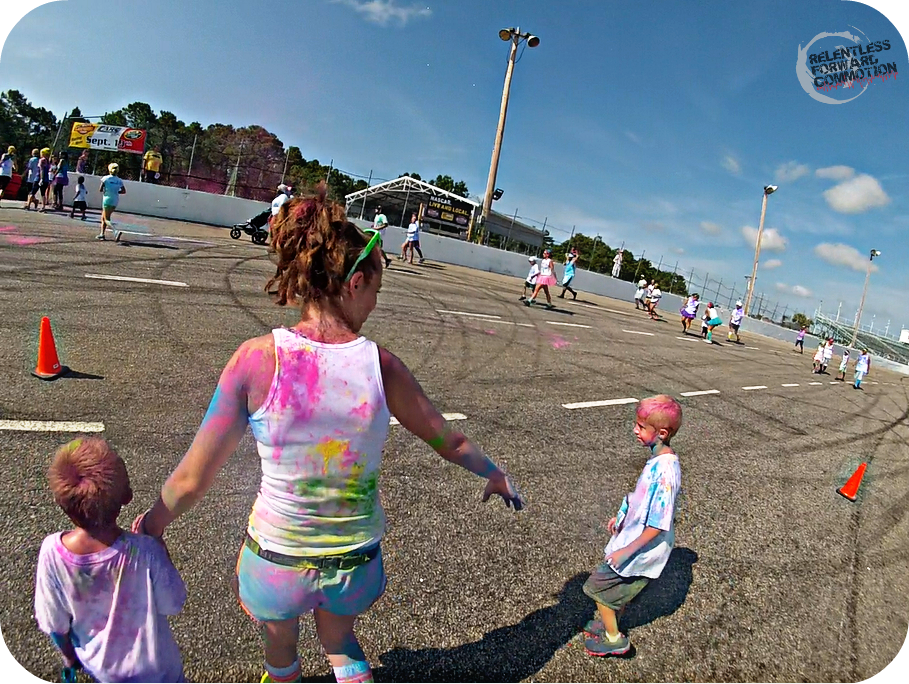 One more color station and it was a straight shot to the finish line. 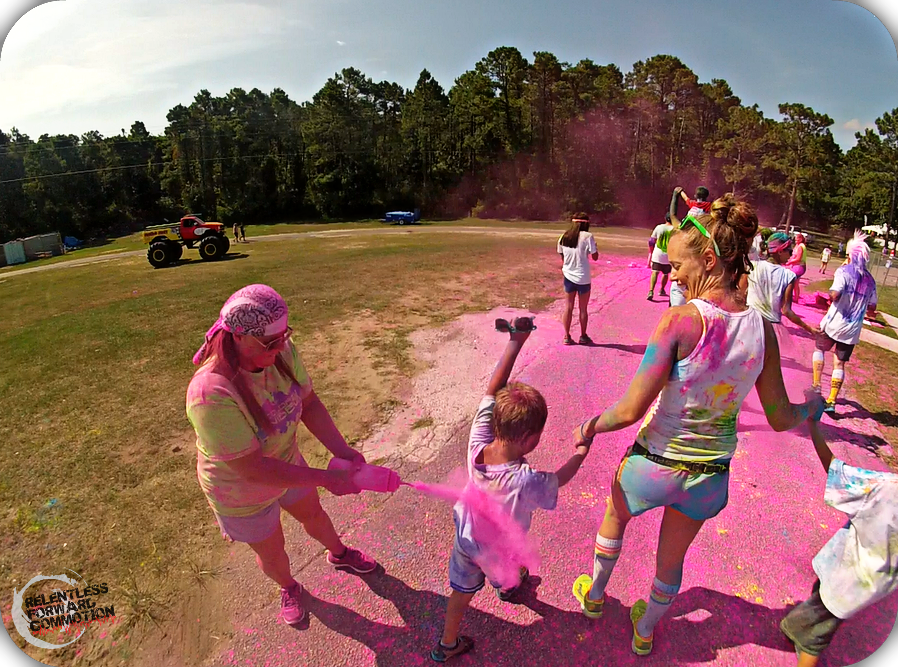 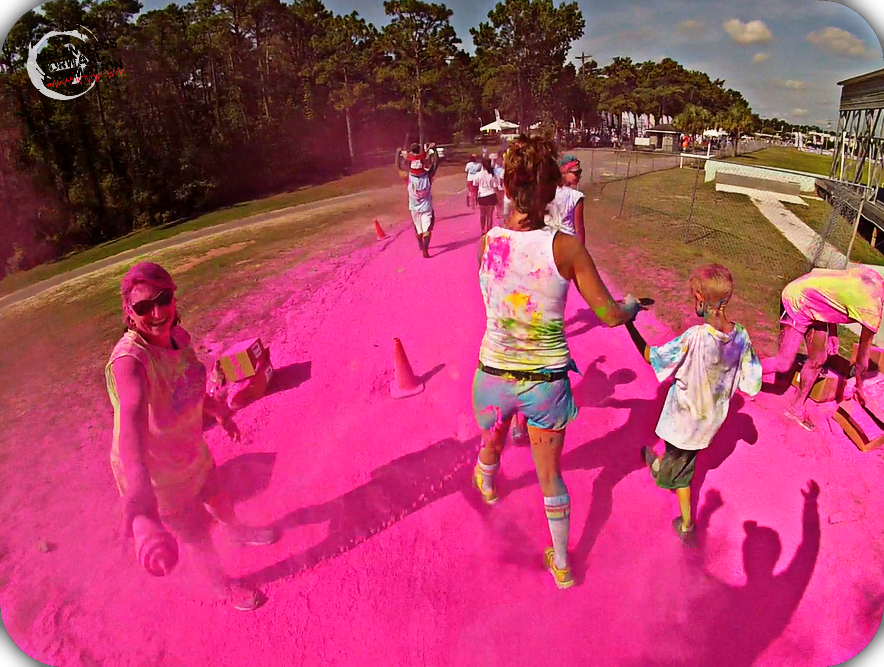 Kain, always the one to tell you exactly how he is feeling, saw the finish line and started screaming “WE’RE ALMOST THERE!” much to the amusement of everyone around us.  You would have thought we were nearing the finish of a 100 miler, not 3.1 (or about 2.5 in our case); it was hilarious. 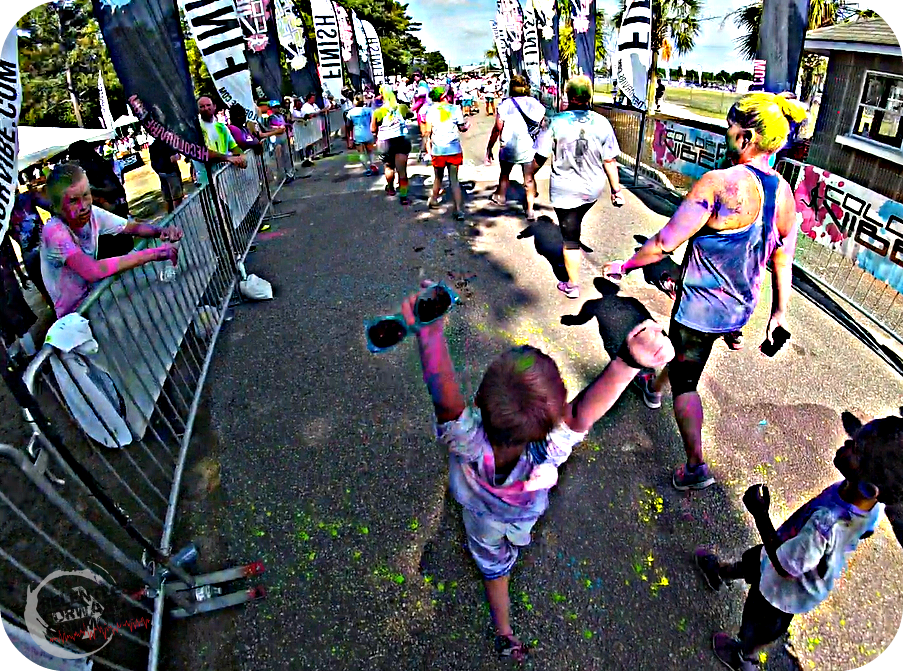 At the finish line, we were all handed bottles of water and shuttled towards the Dance Party.  A DJ on stage was hyping up the now very colorful crowd with loud music, as well as tossing giveaways (t shirts, color packets, etc) into the crowd. 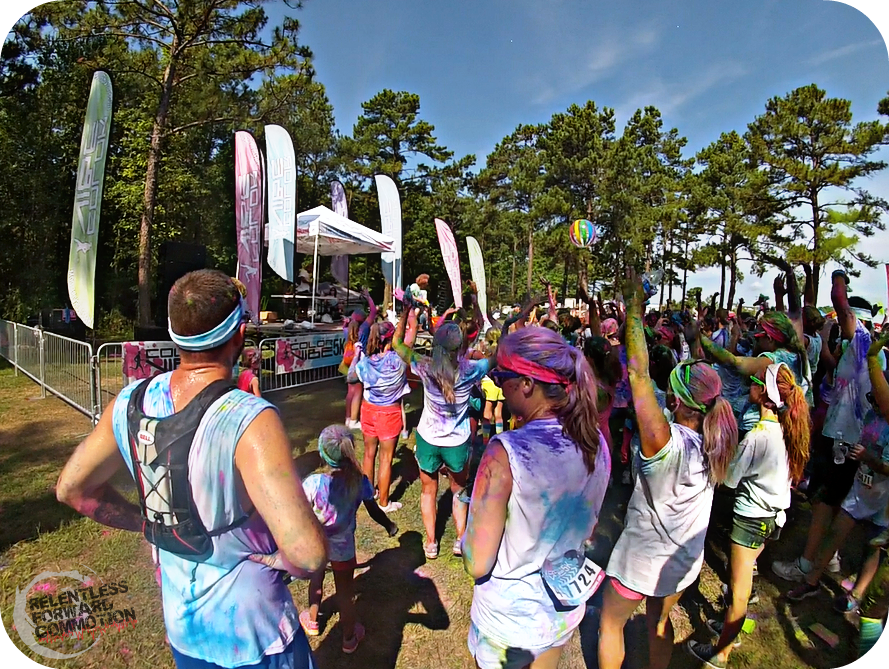 My overall thoughts on the Color Vibe?  It was exactly what I expected it to be: a 5K run where people threw colored powder at me.  Nothing more, nothing less.  What I liked the most was exactly what I mentioned at the beginning of this post: the fact that this race catered to families and beginners.  It was not your typical race, there was a lot of cotton t shirts and bibs pinned to the back of shirts.   But there were a lot of people out there encouraging each other to step out of their comfort zone, between completing a 5K and getting covered in colored powder.  And everyone seemed to be having a really fun time.

My kids had a blast, despite the heat and the fact that a 5k was a lot longer than the oldest anticipated, haha.  They both are asking when they get to run in a race again, so for me, that was a win.   Thank you, The Color Vibe, for a fun (and messy) morning!

*disclaimer: The Color Vibe provided us with entry fee free of charge, however, all opinions expressed are my own. 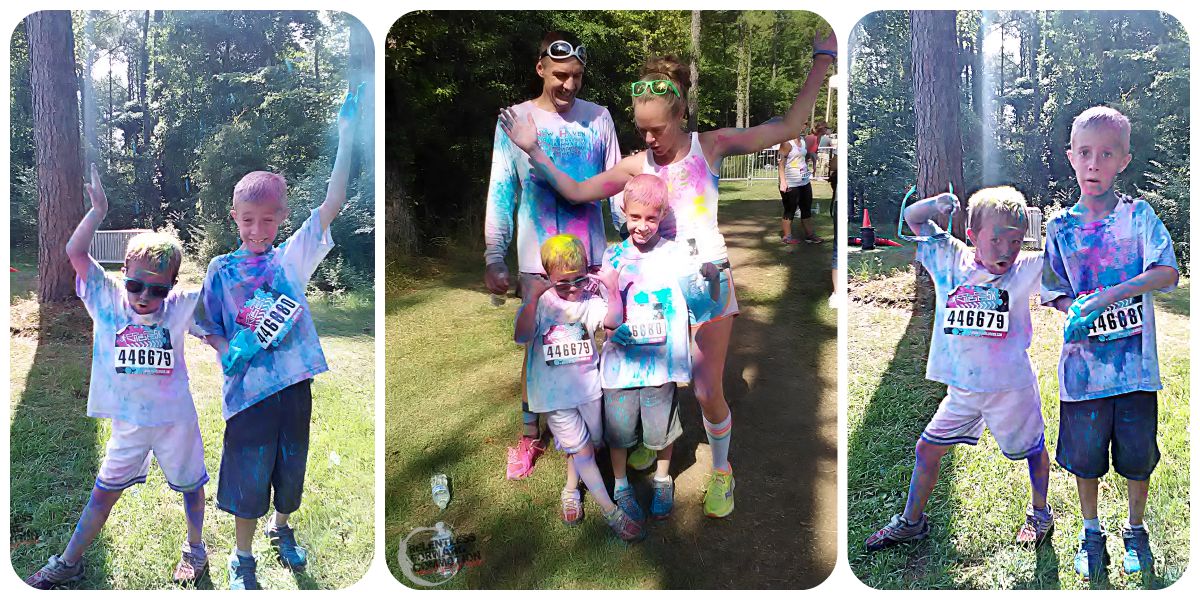