I grew up in Vermont.

My parents have told me that long ago they used to always dream that they would raise their children in the Green Mountain state. And be it planned, fate, or simply circumstance, when I was 10 (my younger sister 7) their wish came true.  We left suburban Southern Connecticut for a tiny town in Vermont that at the time had less than 1,000 residents (and more cows than people, my dad always got a kick out of that statistic). 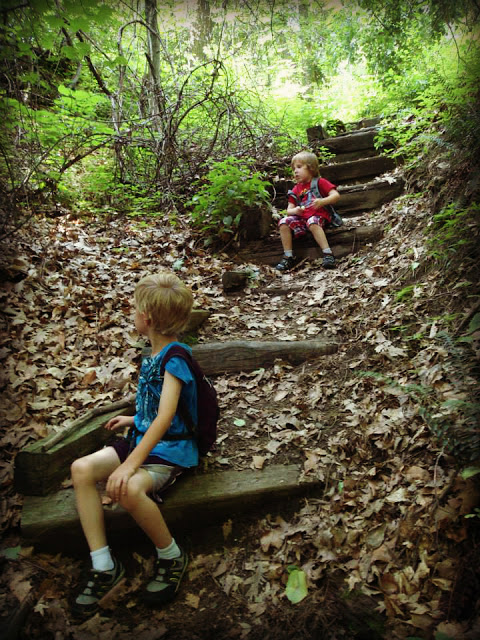 Summers in Vermont were everything you would have probably expected. Our next door neighbors (whose house was about a quarter of a mile away) had two daughters that were around the same age as my sister and I; so naturally, we spent most of our free time together.   Nearly every morning in the summer, we would meet at the halfway point on the dirt road that connected our homes, and we would begin our daily adventures. Riding bikes, building forts, hiking through the woods, playing in streams, the escapades were endless.

And while certainly enjoyable, our adventures were forced: I clearly remember our mothers starting each day by saying something to the four of us along the lines of “unless you are bleeding, I don’t want to see you in this house until lunch time.”  The same went for the afternoon: “unless there was an emergency, don’t come home until I call you for dinner. “  The typical summer time kid cries of “I’m booooored” were absolutely unacceptable, and television was reserved for rainy days only.

At the time, as a budding pre-teen, I thought this was cruel and unusual punishment by our evil, uncaring parents. Now as an adult, I cannot thank them enough for what they did for us. For instead of spending summers hanging around town or the mall, lounging pool side, or in front of an air conditioner and TV, I have far more impressive memories of the time I spent on summer vacation.

There was the summer we were absolutely convinced that a tossed garbage bag in the woods about 100 feet off of the side of the dirt road contained a dead body. Very “Stand by me”, I know. After many weeks of elaborate stories every time we walked by the bag, we were certain that if there wasn’t a dead body inside, it just had to be wads of money, and therefore, someone HAD to go and investigate. If I remember correctly, we finally made the youngest, who was also the most fearless, approach and poke the bag with a large stick…only to discover it was full of old, rusty, tin cans.

There was the time we took turns performing songs and dances on top of a large wood pile “stage”, only to roll our spectator bench (downed tree) over mid performance to find a nest of baby snakes taking shelter underneath. In typical little girl fashion, we all ran off screaming, leaving the performer atop the “stage” (and also, the most fearful of snakes) to fend for herself.

There were the hot days we spent in the river, with swim goggles on our faces, catching crayfish, pretending we were marine biologists exploring the tropical oceans; or in the tiny stream, catching salamanders and tadpoles, pretending we worked in aquariums.

I remember spending countless hours building elaborate forts in the trees, eating blackberries and raspberries straight off of the bushes, playing on tire swings, hiking past deer poop and bear tracks and not thinking twice about it, and spending an entire day watching a monarch butterfly carefully emerge from its chrysalis. And forget cell phones or “helicopter parents”….if one of us got hurt, someone else had to make the 5-10 minute run back home from wherever we were playing to alert an adult. 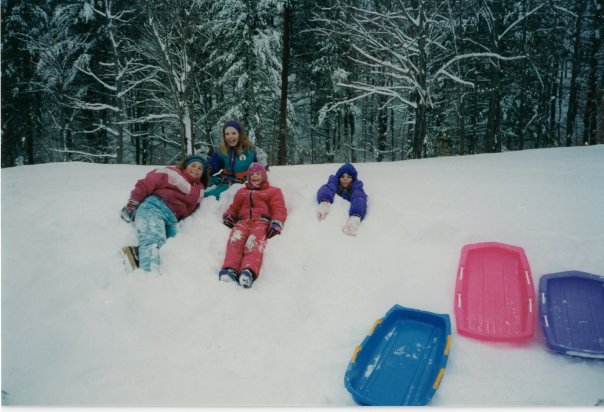 Years passed, and I was eventually the first to ditch the summer fun. My teenage years arrived, and I was far too preoccupied with spending time with my best friend reading Seventeen magazine, tanning in our bikinis, flirting with boys, and working my first job in order to pay for the elusive first car. I found myself loathing Vermont, wishing we had more malls, civilization, and a real beach…you know, like the ones on MTV’s “Spring Break”.

It wasn’t until I was older that I would appreciate the fact that I grew up in Vermont.

It wasn’t until I became a mother that I would become aware of what an amazing gift my parents truly gave me.

My boys were born and almost exclusively raised in South Carolina, and have spent the last 10 months there with their dad. A post with an explanation I’ve been putting off for a long time now (ten months to be exact), but I’m more likely to share eventually, now that they are just on the other side of this wall here in our apartment, and I can squeeze them whenever I want. And while I know that my boys are incredibly well cared for, their current circumstances (available time, location, and ridiculous South Carolina heat) mean that they spend a lot of their downtime indoors. That is not me judging, I am simply stating a fact. It is what it is. And it is blatantly obvious by the fact that whatever you ask my 4 year old, he will somehow circle the conversation back around to include his Nintendo DS and/or some sort of Mario game. The same goes for my 6 year old, only replace Mario with Lord of the Rings.

In the first 72 hours of having them for summer vacation, we have gotten into countless arguments and resulting temper tantrums (them, not me) over the fact that we are only allowed video game time in the morning, and that there are far better things to do than watch TV. Hell, we don’t even have a television, never mind cable, a fact that left my 6 year old reeling, and giving me a look of disgust that made me question if he was in fact 6 and not 16 years old.And now, as a parent, I dream of my boys growing up in the woods. Building forts, eating fresh raspberries off of the bushes, learning which plants are poisonous and which are safe to roll through, watching clouds, and using their imaginations to create elaborate adventures, with no technology involved. I dream that one day they will grow up to realize that the hustle and bustle of modern technology is great, but true freedom and beauty is found in nature.

I will not be so foolish to deny the fact that my children’s generation is growing up in a different world, that it is entirely normal for our babies to learn how to download apps to an iPad long before they learn how to do a somersault. But I also hope and dream that in addition to the ever present technology and necessity to grow up faster than we ever did simply to survive, that my boys learn to stop and appreciate the simple things in life, and how wonderfully majestic mother nature is. 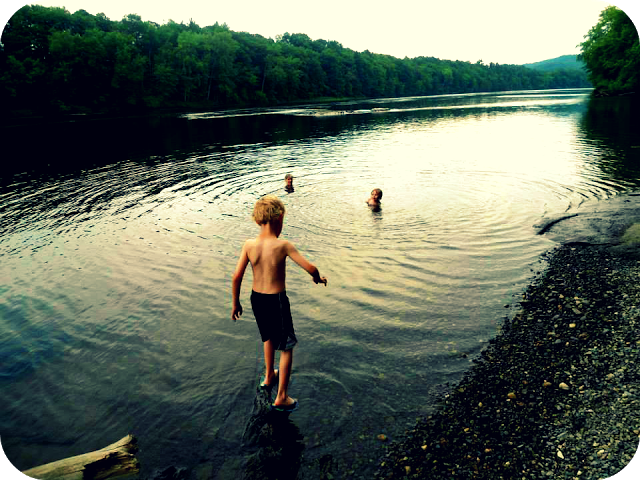 It is currently an elaborate dream, as my 4 year old currently considers a “hike” to be all of 10 minutes before he NEEDS someone to carry him, and my 6 year old complains about the heat, the cold, the bugs, the plants touching him (MOM I ITCH THAT HAD TO BE POISON IVY!), and the logs in the river that he is without a doubt convinced are alligators, no matter how many times I assure him that the winter blizzards keep the gators South of the Mason-Dixon line. Regardless, every day, we go outside. We hike, we explore, we get bugs in our eyes and we end up bailing before I had planned. To say the least, it is incredibly frustrating, yet amazing, to see them truly experiencing the Green Mountains for the first time, but I feel very blessed to have the opportunity to share this place with them. Every nature induced temper tantrum is totally worth it.

Which is probably the same way my parents felt, 21 years ago.