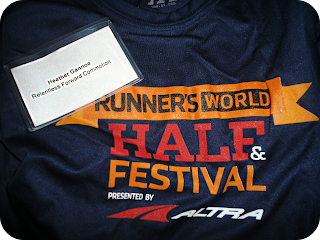 I’m sitting at my desk trying to form the opening sentence to what will be the first of many blog posts about this past weekend.  I’m coming down from a huge runner’s (and all things running) high, and I don’t even know where to start. Exhausted, sore, honored to have been a part of this weekend,  and overwhelmed with gratitude that I was granted such an amazing opportunity: I have so very much to say.  This is going to be split into four posts (one for each day we were in PA) because simply put: I have a hard time with bullet-point highlight posts when there are so many stories to be told. So I guess the best place to start is from the beginning…

Thursday morning, I hopped in the Spartan Mobile (the name we have bestowed upon the gross little box car that totes us…and our smelly, sweaty, muddy gear…to and from adventures) and headed down to Bethlehem, Pennsylvania for a blogging weekend at the Runner’s World Half Festival.   My drive was totally uneventful (for once!) and I arrived without a problem.   As I headed into the hotel I immediately ran into David Tratner of Runner’s World/Rodale Inc.  Having exchanged emails over the past few years, it was nice to finally put a face with the name.  He asked me what marathon I was training for, and I bashfully replied “uhhhhmmm none?” Forget the 7 marathons and countless shorter races I’ve run in the last few years, the fact that I’m NOT currently in marathon training mode at this very moment made me feel like a fraud.  (We are a twisted group, aren’t we?)I was handed a room key, and a bag full of goodies.  Like a kid on Halloween, I ran up to my room to excitedly dump the contents out onto the bed and find out what was inside.  Let’s face it, most runners are gear GEEKS, this is why we have pre-race expo’s chock full of vendors selling stuff that we probably don’t really need, but we love to have anyway. 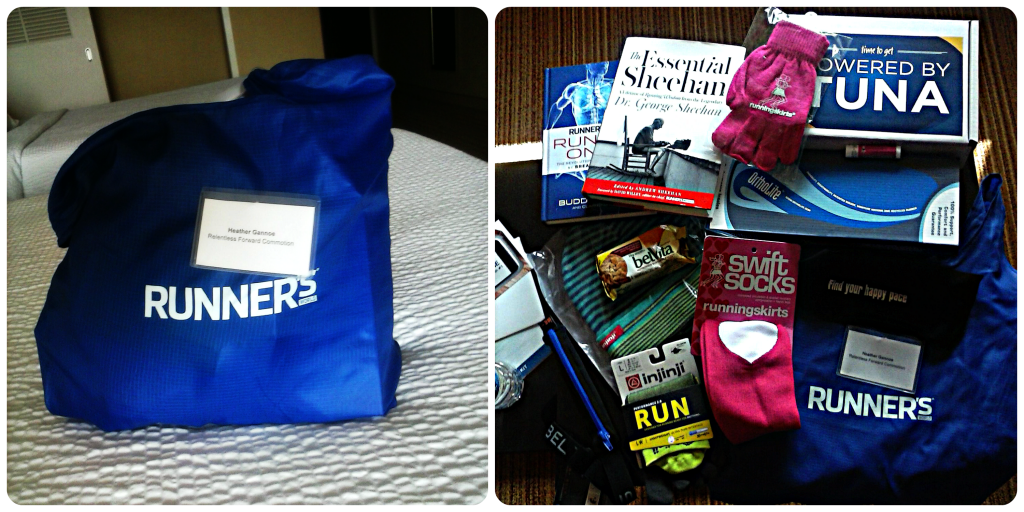 Some goodies from our trip sponsors. I’m incredibly grateful (and most excited about the book “The Essential Sheehan” )

Prior to the race weekend, our awesome coordinator and Runner’s World PR guru Beachy had given us a Twitter scavenger hunt challenge to complete over the weekend (if you questioned any seemingly random twitter posts this weekend, there is your explanation).  Now, I LOVE this type of competition.  I also get a little carried away at times, which is why I’m certain my friends have stopped inviting Geoff and I over for board game night.  But anyway, with the challenge in hand, and some time to kill while waiting for the others to arrive, I got a head start on the scavenger hunt.   Soon after, I got a tweet from fellow blogger Katy, so I headed up to her room to meet her.  Turns out, she was equally as geeked over the challenge, and from that moment on, we became scavenger hunt buddies.  The rest of those bloggers were going DOWN (I really hate to lose).

Next I met up with my roommate Janet.  An incredibly inspiring woman who nearly lost her life, and her leg, in a vehicle accident, yet has made a remarkable return to running.  (Read her story on her website MyLegStory.com).

Finally, we all boarded a bus (and not just a bus, but one of those limo/party buses, it was hilarious and awesome) and headed to the Runner’s World Headquarters in Emmaus PA for a BBQ dinner with the editors.  The food was great and everyone was so kind and welcoming.  I didn’t feel like we were having a meal in the dining hall at a large corporation, but more that we had been invited to family BBQ.  Everyone was genuinely interested in learning more about us, which was so nice (and flattering! I still feel so undeserving of such opportunities!). 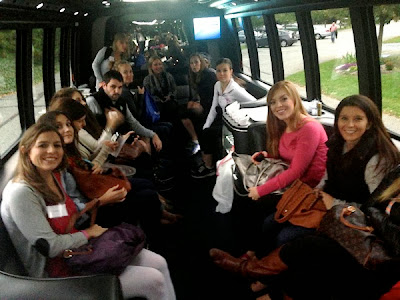 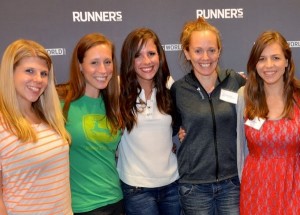 Theodora, Ericka, Janae, Me, Katy (photo credit for both pics,Janae!)

After dinner, we all lined up and introduced ourselves to the staff, and then got a quick introduction from Bart Yasso (Cheif Running Officer of Runner’s World), David Willey (Editor in Cheif of Runner’s World), and Golden Harper of Altra Running (Altra was the presenting sponsor of the Runner’s World Half Festival this year).  In addition to a quick introduction to Altra running (we would get a more thorough presentation the next day), Harper told us about growing up in a running family, and how he ran a 2:45 marathon at 12 years old. Yes you read that right, no typos in those numbers. Unreal. I’m pretty sure at age 12 I was dreading the one mile run in gym class. 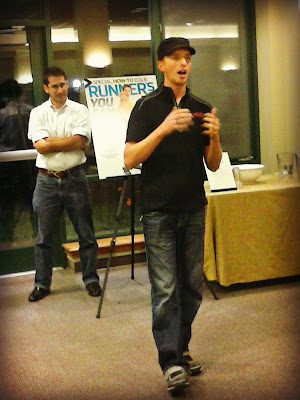 Bart Yasso was then kind enough to give us the grand tour of the headquarters…including his personal office.  The walls and doors of his office were just COVERED with race bibs and paraphernalia. I wish I had more time to really look around…this man has had some amazing adventures. 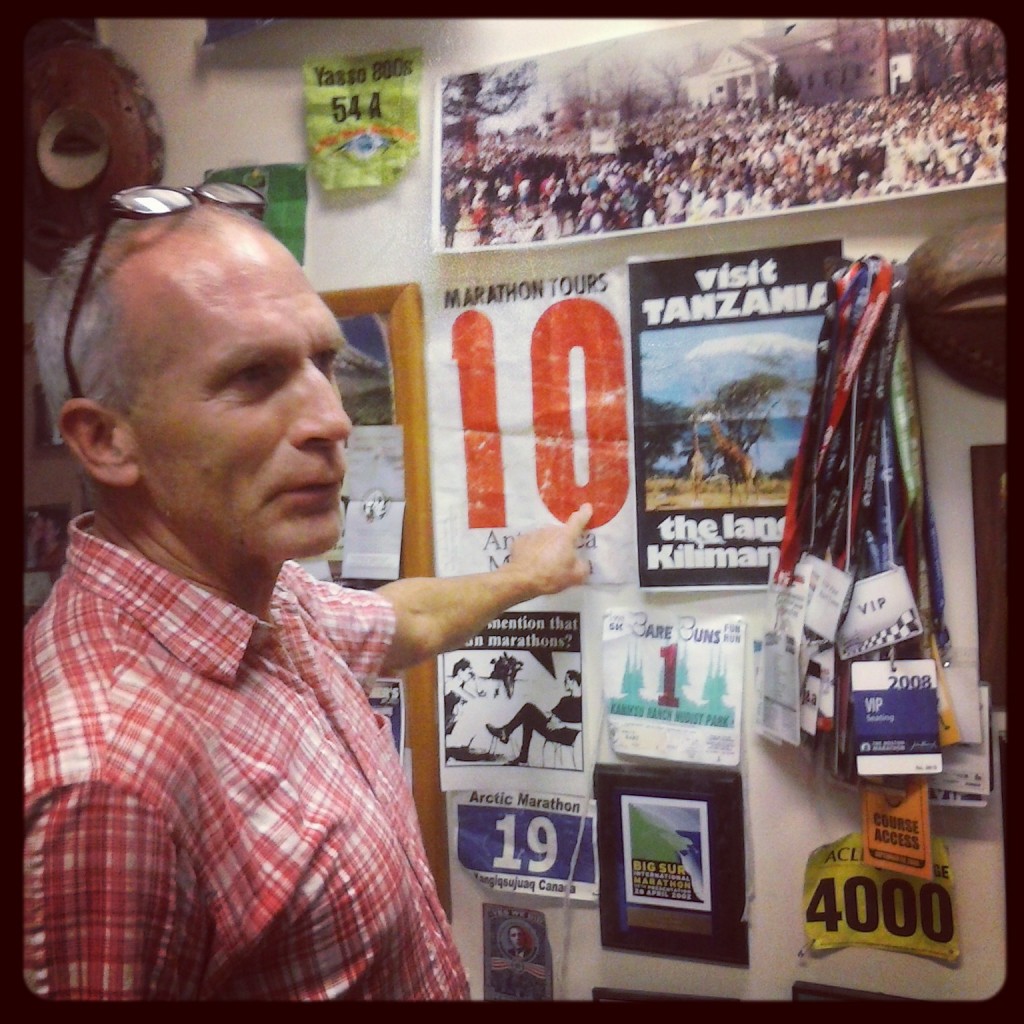 We learned the ins and the outs of the building, and saw a tiny glimpse into what it takes to make this monthly publication work.  Some highlights in my opinion, included the bike room…an entire room full of employee’s bikes, as well as test/review bikes for Bicycling Magazine (also located in this building).  I was drooling over the awesomeness of it, and I’m not even an avid cyclist.

After the tour they fed us S’mores, (brownies for the vegetarians!) because runners need to carb load. Heh.  (Being the lame blogger I am, I didn’t get any pictures of the food. Sorry, it’s still not my thing.)

I also got to quickly catch up with Runner’s World’s Dr. Martyn Shorten, whom I had the pleasure of meeting in Portland OR earlier in the year.  A brilliant man who has dedicated much of his career to studying (and thus, bettering) the biomechanics of running and running footwear, I was so surprised that he remembered me, that I didn’t even think to ask him any pertinent questions regarding the latest shoes on the market (I always have many questions!).  Oh well. If, perchance, you are reading this blog (in which case, I’m honored), it was great to see you again Martyn!

And then we headed back to the hotel to get some rest, for the fun was just beginning.  Stay tuned for part two…

What is one question you would ask the staff of Runner’s World if you were to meet them?