Saturday morning the alarm went off at 5:30 am.  It didn’t matter much, as I had been awake since about 4:30 am.  It was the morning of the Arena Attack indoor marathon in Hartford, Connecticut, and I was far too excited, and so nervous that we might somehow miss the alarm, that I couldn’t fall asleep.  I popped out of bed, got dressed, posted a picture of me body gliding my feet to instagram (it’s what running bloggers do), grabbed my bags and my boyfriend, and out the door we went.  I knew the weather was supposed to be questionable, but I was pleased to see that nothing was falling from the sky when we stepped out the door.

At least, not yet.

In the 15 minutes it took us to drive one exit South where we stopped for gas and the ever necessary road trip Dunkin Donuts, the sky had opened up and snow was coming down fast.  I brushed it off (literally); this was Vermont after all, driving in snow during January is to be expected.  So after fueling up on gas, coffee, and a few donuts (shh, it’s carb loading), we continued on our journey towards Hartford.  Within minutes the snow became so bad I couldn’t see the road.  Traffic on the interstate had slowed down to a mere crawl.   In the back of my head, the part where my mom and dad’s incessant safety warnings over the past three decades have taken up residency, I knew attempting to make this 1.5 hour trek was a bad idea.   But I really, REALLY wanted to run this race, so I kept my thoughts to myself and trudged forward.

As we slowly crawled across the Vermont/Massachusetts border, the voice of reason, otherwise known as Geoffrey,  gently coaxed me into turning around.  Even if we made it to the race safely, we would most definitely be late at the slow pace traffic was currently moving.   I knew he was right, so about 25 miles from home, I turned around.  Despite the fact that my car almost slid off the road as I entered the North bound entrance ramp, I was still disappointed.

Actually, disappointed is an understatement.  I tried to check my attitude and hold it together, but internally I was worse than a 3 year old denied candy at the grocery store checkout lane.  So I silently fumed. OF ALL DAYS MOTHER NATURE, you had to pick this one?!   Realistically, I knew getting so upset over missing a race was such a trivial, ridiculous thing.  Not crashing my car in a snow storm(or worse) should have been a bigger concern.  But running an organized indoor marathon was a bucket list item for me, and something that is surprisingly hard to come by.   Plus I had spent the week (sort of) tapering, not to mention fueling, with every intention of running 26.2 damn miles.  It was such a massive let down.

So I decided I was going to do it anyway.

Sunday morning, Geoff was amazing enough to volunteer to cover my shift at the gym.   With freshly body glided feet, I unlocked the gym doors and immediately staked claim to my treadmill.  It may sound silly, but when you spend enough time in a gym you learn to love certain pieces of equipment more than others, even if they are essentially the exact same thing.   I put on my hydration pack, set the treadmill to an easy pace (6.3 mph/ 9:31 minutes) turned on the TV, and started running.

Like most runners, I’ve previously had a love/hate relationships with treadmills.   There have been days when it’s all I can do to struggle through a 3 mile run.  Then there are others, like the week before, where 10 miles came easily.  To be honest, my longest treadmill run to date had been 10 miles, so attempting to run 26+ was indeed a stretch.  But I had this insane desire in my head to run a marathon, and damnit, I was going to do it.

So, how does one recap a treadmill marathon?   “The course was flat and pretty straight forward” might sum it up.

Here’s the run down:

Interval 1: 2.35 miles  The 5 hour energy I drank kicked in, and I already needed a bathroom break.  Geoff taped a piece of paper and a sharpie to the treadmill so I could keep track of distances and times, mainly because the treadmills at our gym are highly unpredictable.  Regardless, I would put the treadmill on 0.05 mph (the slowest it goes, barely a turtle walk) in order to keep the clock going.  Guess who forgot their watch AND fitbit at home that day?

Interval 2: 10.1 miles  Despite leaving the treadmill running, I managed to hit the emergency “stop” button on the side of the treadmill as I hopped back on.  This is going well already.  Restart.  Back to running.  Interval 2 went by surprisingly went by fast.  I gave up on watching TV about 20 minutes in and handed the reigns, I mean remote, over to another gym goer.   I put on my ipod and just zoned out.  I was genuinely just happy to be running.  Every now and then a gym member would swing by to talk to me.   That morning I had felt like a jerk for bogarting a coveted treadmill for WELL over the 20 minute recommended time frame.  But everyone was incredibly supportive of my marathon attempt, if not slightly concerned for my sanity.

every hour, drank water whenever I felt like taking a sip.  It was surprisingly hot in the gym for once (I swear I’m always freezing in there!) so I drank A LOT of water.  As a result, I believe I had two bathroom breaks in this interval.  The treadmill automatically stops at 99 minutes and 30 seconds, which for the record is 79 minutes and 30 seconds longer than the recommended 20 minutes during busy times gym guideline. 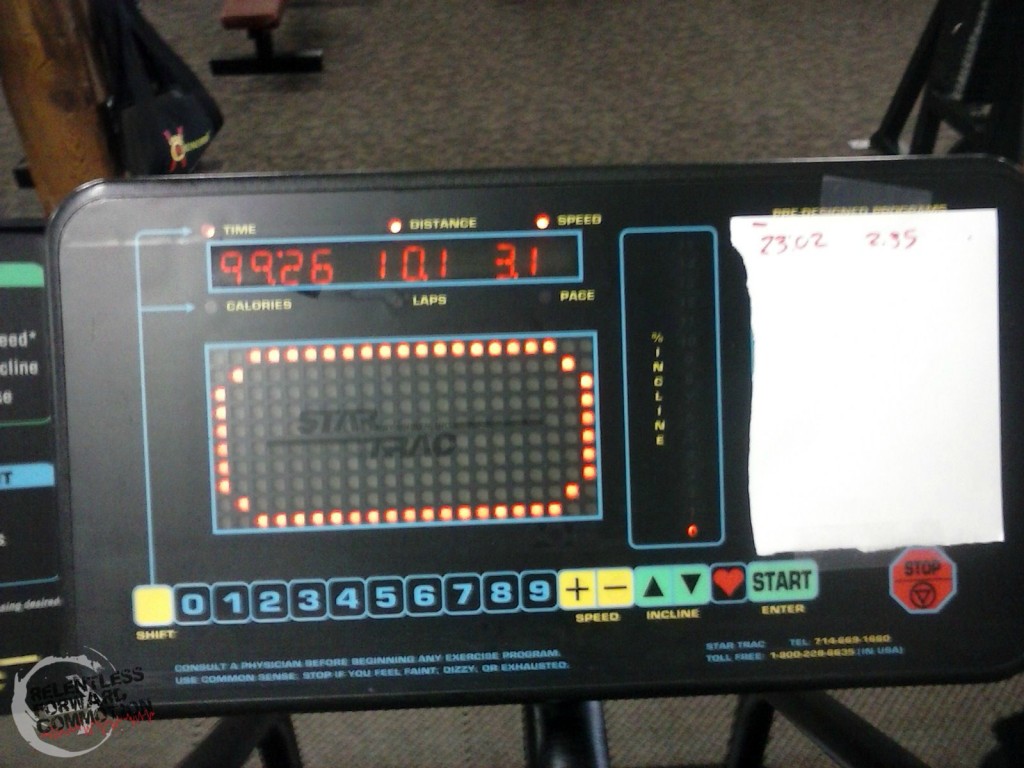 Interval 3: 4.82 miles  At about 17 miles in, I was starting to chafe on the inner part of my upper arm where my hydration pack was rubbing.  I called Geoff over and asked him to grab the Body Glide out of the bag behind me.  At that moment he asked me what my current stats were, and thank goodness he did, because as soon as I said them out loud, the treadmill stopped.  Not only did it stop, but the screen went black.  Nothing stops your heart like going from a full on run to standing still in the matter of two seconds.   I turned around to see Geoff digging through my bag…with the plug to the treadmill dangling behind his back leg, completely unplugged from the wall.   Not going to lie kids: I turned into a bitch for a minute.  “Shit! I can’t believer that happened!  Fuck, fuck, FUCK!! ” they all came out of my mouth.  Geoff reminded me that I just TOLD him the numbers I had JUST read from the screen, he repeated them again and told me to write them down.  And to calm down.  And to quit being a jerk.  He was right, of course, but at 17.2 miles in, my brain was starting to turn to mush.  Math was becoming harder by the minute and I was just a few miles away from entering survival mode; at this point even the tiniest thing felt like a huge deal.  And really, it was not a big deal.  Sorry Geoff.

Regardless, the treadmill was plugged back in, my arms got a fresh coat of Body Glide, and I started what I hoped would be the last interval.  (Note, I added two minutes onto my time here to account for the unplugging and subsequent body gliding)

Interval 4: 9.02 miles  I cruised through the next three miles before everything started to fall apart.   I hit that “you didn’t train for this” wall that I just KNEW was coming. 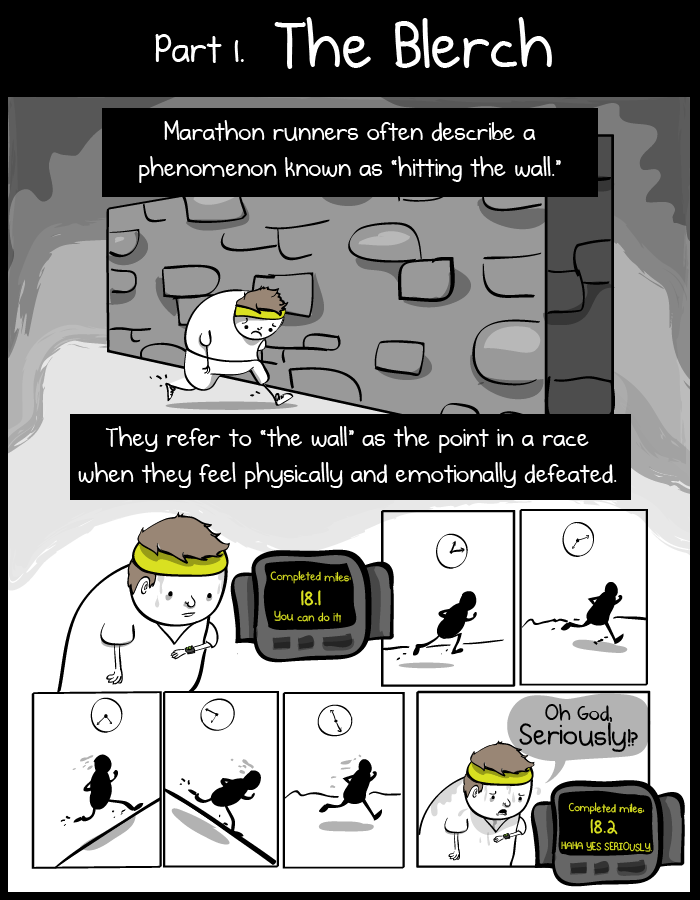 From: The Terrible and Wonderful Reasons Why I Run Long Distances

Mentally, I felt great (for the time being).  My cardiovascular endurance felt great, my breathing was calm, my heart rate low.  My legs on the other hand, were on FIRE.  I was starting to get really hot, so I took an extra endurolyte and asked Geoff to water down my buff (headband) to help keep me cool.   My new game plan was to run one mile, walk for a minute or two.   To be quite honest, this is where I felt that running on a treadmill was an advantage.    When your legs hurt as much as they do on at the end of a marathon, it’s so easy to stop and take a walk break.  Not as easy when you are on a treadmill.  You have to actually go through the process of pushing buttons instead of simply stopping, and frankly that was far too much effort, so I just kept running.   My breathing started to become labored for the first time all day.  I was hungry, tired, and slightly dizzy, likely from running in place for the past 4 hours.  I was ready to be DONE, but wouldn’t quit just yet.

With two miles left, our friend Mike came over to check on me.  He laughed at how ridiculous this was as I told him my legs hurt so _____(insert your choice of expletive here) bad.  When I told him “I want a finishers medal for this” he scrambled off towards the front desk.  Out of the corner of my eye I could see two grown men in their 40’s cutting and pasting feverishly.  It made me laugh, but only for a few seconds.  I had a “race” to finish.

The very last mile was slightly easier.  I so desperately wanted to be done that I cranked the speed up to 6.6 mph and just ran.

And then it was over.

I was presented with the most ridiculous, amazing finishers medal I have ever seen. 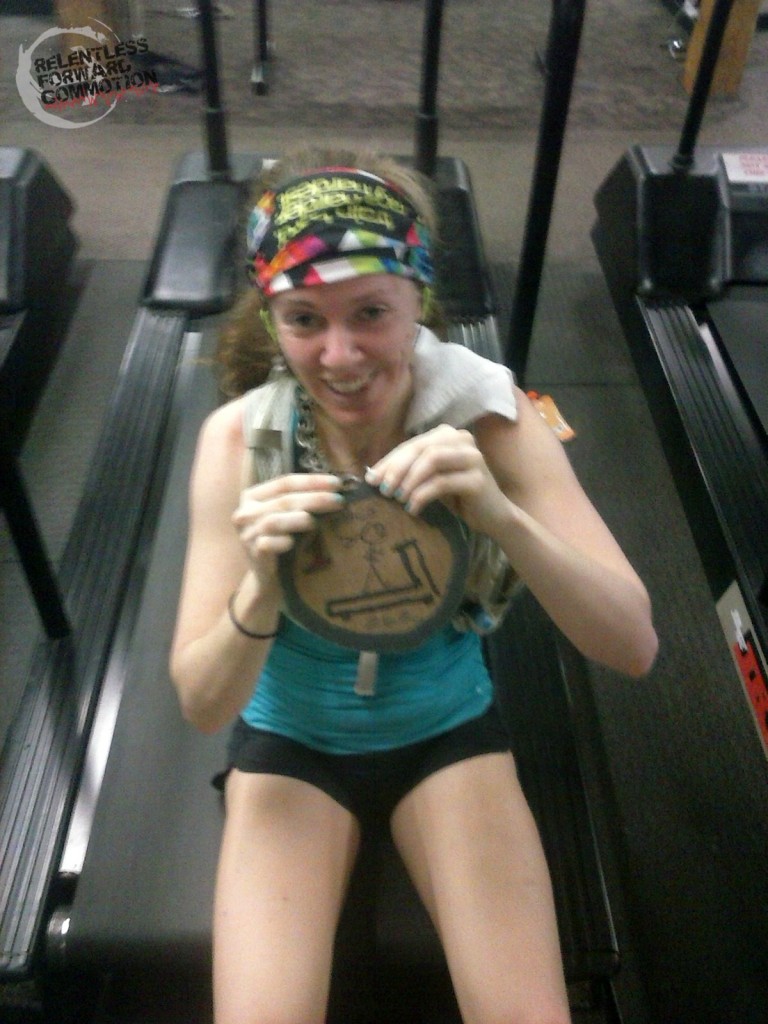 One day I will purchase a cell phone worthy of non blurry photos. Until then, you get these fuzzy fun pics.

I couldn’t stop laughing.  According to my medal, I took 1st place in the treadmill marathon.  First place out of four: it was me against my legs, monotony, and the voice in my head  (you know, the Blerch). 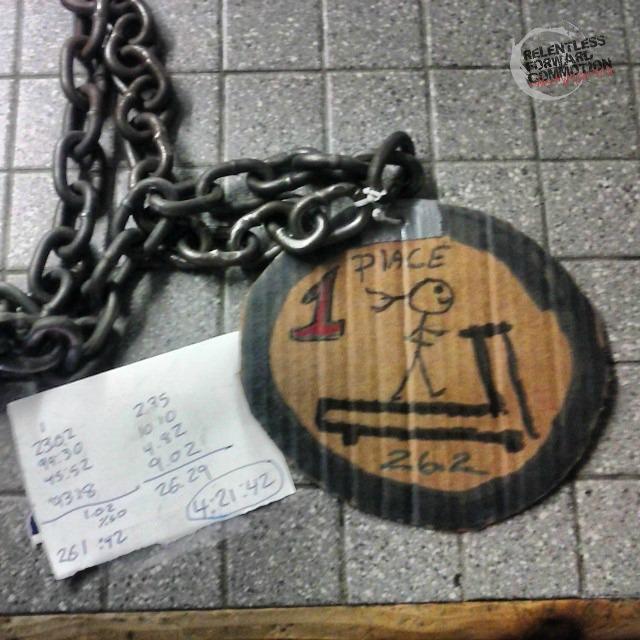 If my calculations were correct (questionable, as math is really, really hard after running for hours) the run took me 4:21:42 to cover 26.29 miles, including all rest breaks and the accidental loss of electricity.

WHAT I LEARNED FROM MY TREADMILL MARATHON:

1) Treadmills don’t suck as much as I previously thought.  It’s all about attitude.  Think the treadmill is going to be boring, and it will be boring.

2) My body is capable of amazing things.   I haven’t run more than 10 miles in a very, very long time.  Yet I was able to relatively easily run a marathon.  That’s pretty cool.

3) How in the WORLD do you people run 50, 100, or even longer races?  I really have my sights set on doing longer distances this year.  I can only hope that with proper training (notice a trend here?) the legs become accustomed to longer distances. It all makes sense in theory, but the DOMS I’m experiencing right now makes me skeptical.

4) I’ve finally, FINALLY, got my long distance nutrition down.  I had zero stomach/GI issues during the run, and none after.  More notably, I wasn’t feeling bloated at the end of the run, as I typically do.

5) I really like to run.  Which is great, or a treadmill marathon would have been a horrible idea.