I realize you are a large athletic company and not an actual, tangible, person; but if you and I found ourselves in the same room at the same time, like at a birthday party for runners and shoes, or maybe even the frozen foods aisle of the grocery store, I would give you a giant bear hug like we were long lost friends.  For even though we have never met (and I’ve never run in your shoes), I really like you.  Because you and I…we get each other. (Also, running makes me really happy and overly friendly. But you probably already knew that.)

Your new study, “What If Everybody Ran? An Investigation into the Potential Impact of a National Running Movement“ is exactly what I’ve been shouting from the rooftops for YEARS…

If everybody ran, the world could be a better place.

Only your version is far more formal and academic than my typical blog ramblings. 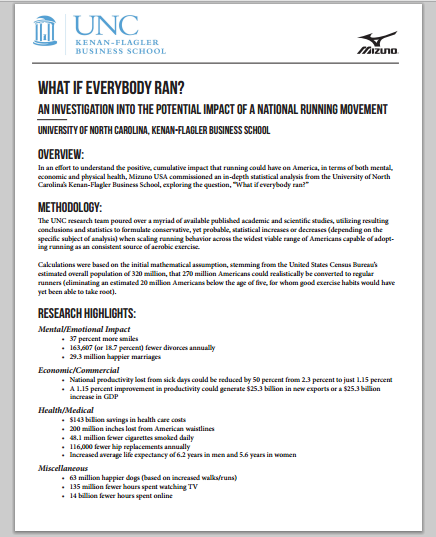 In an effort to understand the cumulative impact of running on mental, economic, and physical health,  as well as some of secondary effects created, Mizuno USA asked the University of North Carolina Kenan-Flagler Business School to explore the question “What if Everybody Ran?”  The results, though somewhat hypothetical and often lacking direct causality, still put a smile on my face.

According to one study quoted in this analysis, exercise can reduce anger rates by 83 percent and improve overall mood by 37 percent. If the whole country ran, we might experience 37 percent more smiles in the United States.  I’m still smiling just thinking about it.

For those of you who are into visual learning, take a minute and check out the fun, interactive website:  www.ifeverybodyran.com 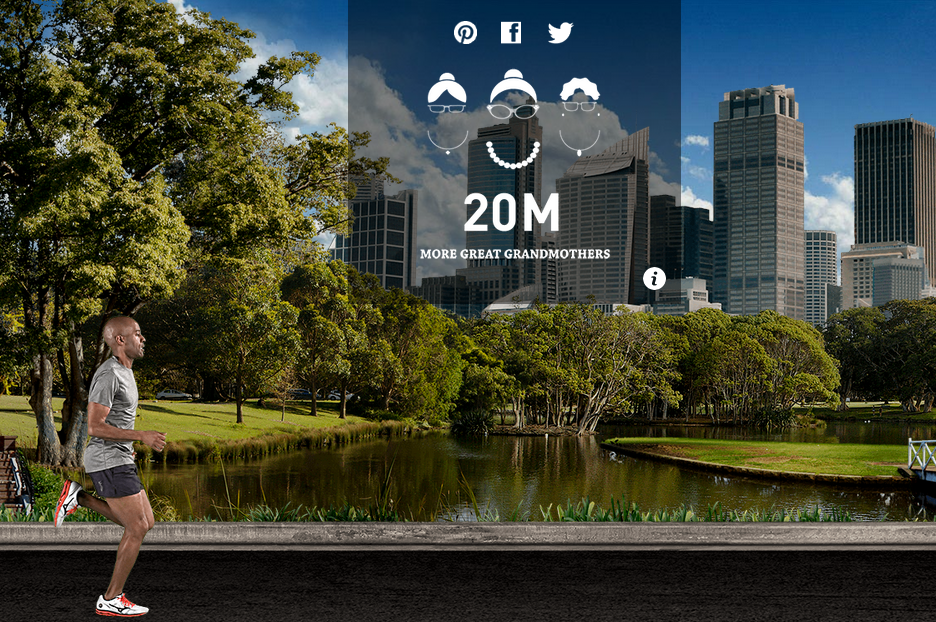 “The benefits of running include more than the 6 extra years of life it delivers on average. It includes extra Christmas morning surprises, extra secret recipe birthday cookies and extra hugs. Let’s face it – the world needs more grandmas.” – Mizuno

For those of you who have a few more spare minutes, check out the entire 11 page analysis.  There are statistics that seem pretty obvious to most of us, such as a significant decrease in health care costs (an estimate of $143 billion dollars annually).  But some “if everybody ran” facts were less obvious, such as a possible decrease in divorce rate (163,607 or 18.7 percent annually) and an increase in happy dogs (63 million more happy pups!).   Some research highlights: 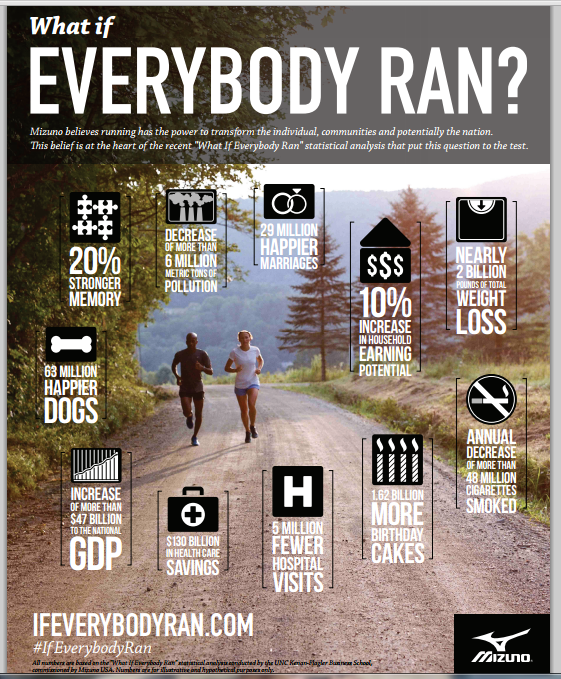 Running has changed my life for the better, and I know that it can do the same for others…if not the whole world.  I’ve always said that most of the worlds problems could be solved over a long run; that if world leaders would put their issues aside and put in a lunch time 5K, maybe there wouldn’t be nearly as much hostility and conflict.   But I’ve always said it with an air of wishful thinking and perhaps rose colored glasses.   So thank you, Mizuno, for making me realize that perhaps my endorphin fueled frame of mind…and heart…isn’t too far off from reality.

“No matter how you run the numbers, the upside of encouraging more people to take that first step into the sport looks irrefutable.  If everybody ran, the world could be a better place.  Let’s prove it, one new runner at a time.” -Mizuno

How do you think the world would change if everybody was a runner?  Comment below, or tweet at me with @RunFasterMommy and #IfEverybodyRan