The Grand Strand running club knows how to ring in every new year in running style – with the annual New Years Prediction Run. It goes like this: registration goes to a good cause, cost: non-perishable food to be donated to one of the local food banks . 10 cans for pre registration, 15 for late registration. When you register, you have to put down your estimated finish time for the 5k. Race day, no watches, ipods, GPS, phones, family members shouting your lap times at you (hey, it could happen!) anything you could use to time yourself with are allowed. Winners are NOT based on speed, as in a traditional race, but instead however close you are to your finishing time. (for example, the “winner” today was only one second off of her estimated time!)

You might remember, I participated in this race last year. Except, I didn’t really comprehend the concept…and raced my little heart out, crossing the finish line FAST, but 3 minutes off of my predicted time.

THIS year, I hoped to get it right. I know what my “easy” pace is, the one my legs just naturally fall into and I feel as if I could run for days. Around 9:20/mile. But, being around crowds, with race bibs and people running all around me makes me revert back to some primal instinctual need to run FAST. So, in order to keep myself calm cool and relaxed, I decided to bring in my secret weapon: 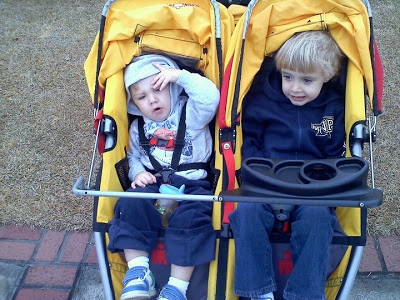 My kids. I’ll admit, I hardly EVER run with the kids in the jog stroller anymore. I’ve been lucky to be able to sneak out without them first thing in the morning, or during nap time while Rich is still home. So I KNEW there was no “racing” with the jogger. I’d be forced to just …run, nice and easy. Thus, I predicted my time: 29:30

This is the first race I’ve run with the kids. No , scratch that, I ran in a “stroller 1 mile race” with them before, but I was the only one who ran, everyone else walked (wasn’t that fun? Talk about cherry picking the awards) This was the first REAL race that I had pushed the boys in a stroller in. Trying to be polite and follow jog-stroller etiquette, I started in the very back. As we waited for the start, I heard a few ladies in front of me talking about walking. I asked if they were walking the entire race, and they said yes, so I asked if they would mind if I started in front of them. They said no (thanks ladies!) so I moved up ahead a little ways.

The course was 3 loops around the big pond at Market Commons on the old Air Force base. Just slightly over 1 mile each. The path around the pond is paved, and maybe, oh 12-15 feet wide? About the width of 4 runners, 5 if you squeeze them in.

As soon as we started, I hit the traffic jam. I really didn’t want to be obnoxious and rude with the massive beast of a jog stroller, so I decided to wait it out. I was stuck behind a crowd, so I slowed to a jog. I mean a “technically, i could probably speed walk right now” pace. There was no getting by these people. A crowd of maybe 4 across and 10 deep lay ahead of me.

We made it to about 6/10th of a mile in (no Garmin, but I know this loop well) when I saw a break. Well, not really, but there was a flat patch of grass on the side of the pavement that didn’t immediately plummet into the pond, so I went for it. Passing on the, errr, right.

As I passed I was met with a bunch of comments such as “she’s pushing that huge stroller and still PASSING us?!?!” and “I bet that thing weighs 100 pounds!” haha. Nothing makes you feel like a superstar quite like the feat of being a running mom. It was at this point that baby Kain (2 years old) took the opportunity to start yelling “FASTER! FASTER! FASTER!” Was he yelling at me or the crowd of people in our way? Your guess is as good as mine but his timing was highly amusing either way.

I eventually made it out of that crowd and was able to continue the rest of the race with only having to pass 1 to 2 runners at a time, and no more big groups. I joked with a bunch of runners I passed that I need a warning signal, or a horn or something, though really, the squealing and giggling of my two little boys was usually enough of a heads up that we were barreling through.

So I’ll be honest with you, I have no idea how to read my pace without the Garmin. I’m a slave to Coach Garmin, I’ll admit it. There was a long straight away with a decent headwind, which feels like a hurricane when you are pushing the double wide , and I felt like I was CRAWLING at that point. Thus, I felt like I had to “make up time” on the opposite side when I had the wind at my back.

I passed running pal Murray, who has taken the overall title of this race twice before. I was tempted to ask him what his estimated time was, and if it was close to mine, stick close to him, haha! But that my friends, would probably be considered prediction run cheating, so I kept running. (And turns out he finished 6 seconds off of my predicted time, go figure!!!)

Long story short, I made up TOO MUCH time, and finished the 5k in 28:13, a whole minute and 17 seconds faster than I had predicted.

And let me tell you something, my “easy” pace isn’t so “easy” pushing 70lbs of kid in 30-ish lbs of stroller. WOAH. People came up to me left and right after the race, congratulating me, telling me how awesome it was that I ran with the kids, etc. I think my “One Bad Mother Runner” shirt made me look pretty jog-stroller-hardcore, haha, but let me tell you, I’m not. I couldn’t help but think of other running moms and dads I know who marathon train behind these torture devices (I mean, jogging strollers). That was hard. KUDOS to you running parents!

I had a GREAT morning mingling with some wonderful friends and their families. The boys were AWESOME and not only didn’t bicker the entire race, but never even MENTIONED the playground we passed three separate times on the course (a New Years miracle!) My camera died so I didn’t get a ton of pictures, but here is a gem I stole from running pal Pat’s facebook page. Actually, it was a close up picture of Pat (she was only 6 seconds off her predicted time! Awesome!) but I cropped her out so you could join me in pondering what in the world I’m doing in this picture, hahaha. I spotted myself in the background and though “oh Heather, are you random dancing again?” It’s certainly not toddler wrangling, as I count 4 feet in the stroller, either way, I find it funny. 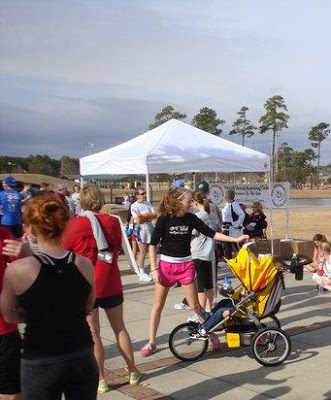 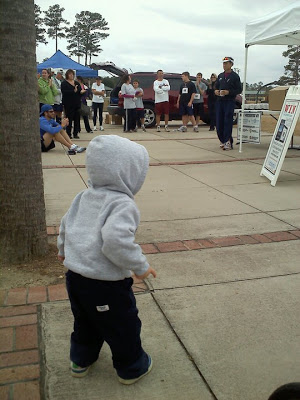 Kain and Rowen jumped and danced their way through the awards ceremony , where I shockingly came in 4th place F 20-19 for my 1:17 difference (first, second and third were 7,8, and 30 seconds off respectively. Big gap there. Whoops!) and I earned myself a coffee cup. 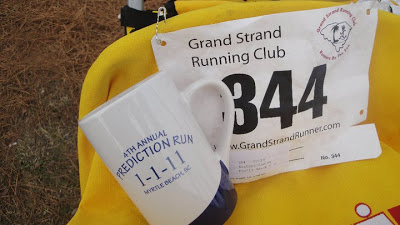 It was a fantastic way to start off the new year. Running with my kids. Fun times with friends. A warm-ish day (in the 60’s!!) And learning a great life lesson in running: sometimes you’ve got to slow down in order to win.
Happy 2011 everyone!