So. Myrtle Beach.  As I’ve mentioned probably every year since I’ve been blogging, I’ve had a Myrtle Beach half/full marathon streak going for quite sometime.  In fact, MB 1/2 was my very first organized race back in 2005.   This year, however, with the move 1,000 miles North, I figured the streak would broken. 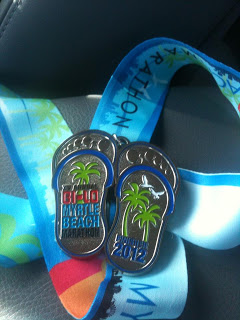 That is, until my ever trusty RPIC (running partner in crime) stepped in.   When the possibility of the boys traveling down to SC to visit their dad coincidentally the same weekend as the race arose…Hope took things into her own hands. She texted me something along the lines of “we are racing”, and next thing I know I got a registration confirmation email.  I was in.  She’s truly the best.

So, the boys, one of my good friend,s and I were loaded into the car to make the drive to SC the day before the race.

I’ll have you know I set a new PR for this race: least hours of sleep before a half marathon.

That’s right, after hitting traffic in every major city between Keene NH and Myrtle Beach, SC, we finally arrived and checked into our hotel sometime after 3:00 am the morning before the race.  RPIC/Hope was concerned with my well being and asked if I needed to be running…when I should probably sleeping.  The answer was yes, of course I should run.  Like I said, 2012 would mark the unofficial 8th year I’ve participated in the Myrtle Beach half/full marathon weekend (unofficial only because 2010 was snowed out.  Though I was here and I was registered, I didn’t get word that half the runners would show up at the start and run the race ANYWAY..so I stayed home).   Plus, I was bound and determined to help pace her to a PR that morning, and I was NOT going to disappoint.

I think I slept about an hour…maybe.  I was jacked up on a couple of 5 hour energy shots (turns out it doesn’t work in multiples, 3×5 hour energy does not keep you awake for 15 hours. Go figure), a very long drive, and lots of emotion as it was the first time I have been back to Myrtle Beach since I left 5 months ago.   Hope came and picked me up from the hotel, and to be quite honest with you, I don’t remember much else about the pre-race.  I dropped off a Garmin to my friend’s husband who was leading a pace group, ate about 1/4 of a Cliff Builder bar, and next thing you know, we were running.

I may be somewhat biased, but the weather for the Myrtle Beach Marathon is almost always perfect.  High 50’s to low 60’s, and in the 8 years I’ve run (with the exception of the great blizzard 3 inches of 2010) sunny.  So the weather for the race was perfect.  And of course, because Hope and I revert to 2nd grade girls (what are you going to wear race day? I dunno, what are YOU going to wear race day? Let’s match!) during races, we had our cute matching Running Skirts outfits on.  Which made for quite the entertaining 13.1 miles as we heard tons of people chit chatting about the skirts as we passed. Like walking advertisements, I tell you. I should have handed out business cards for running skirts.

So to make 13.1 miles short, let me tell you this much: Hope is one bad-a$$ running mother.  Illiotibial band pain (the dreaded running ITB syndrome) started in for her around mile 3.5 and DID NOT LET UP.  We spent the last 10 miles of the race getting from one medical tent to the next so she could slather some muscle rub/pain reliever into her knee.  I pushed as much as I could, keeping her on pace  while not being too evil since she really was injured and not being a pansy (It’s a fine line we crazy athletes walk). 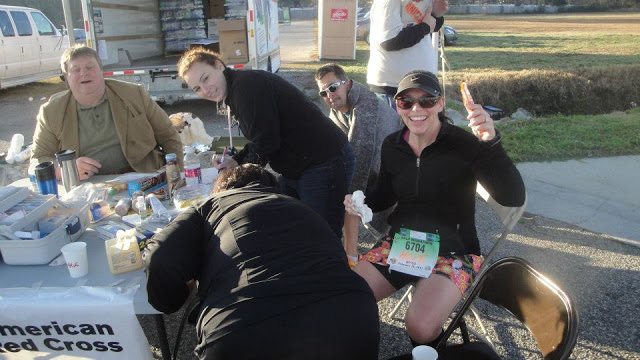 I saw lots of long lost Myrtle friends.  It was such a rush to hear people yell my name…probably because hardly anyone knew I was coming to town to run.  Have I mentioned lately how much I LOVE the running community? So supportive, and always a friend to be found at a race.  The scenery was beautiful (I love the new course so much more than the old one), the spectators motivating,  and the signs were hysterical. 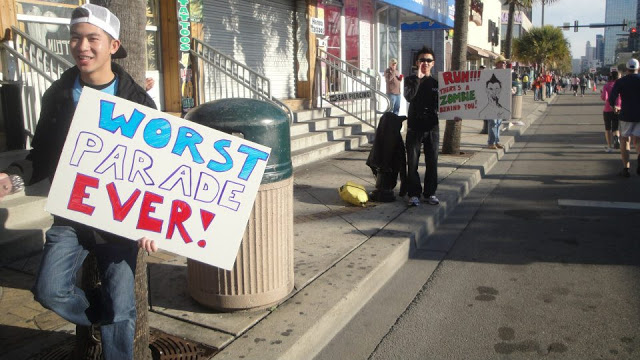 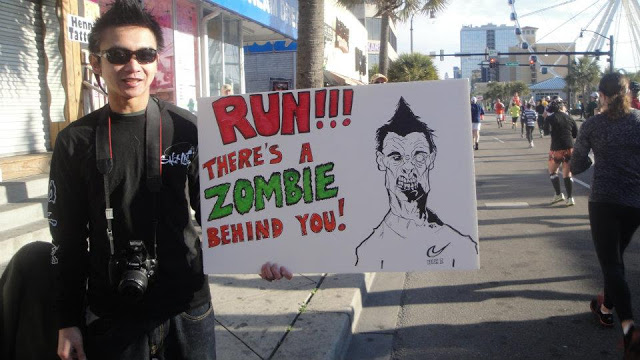 The last mile was tough. Hope hit her breaking point with the ITB pain, and also hit an emotional wall. I could see it in her face, eyes, and behavior, as I’ve been there many times before.  Part of me wanted to scream at her to MOVE because I *know* what it’s like to be that close and just crash.  But the other part of me didn’t want to hurt her…or piss her off.  I said some motivating words along the lines of “you’ve birthed babies and run with guns and rucksacks on your back, this is NOTHING”, and even politely told some woman, who was trying to be helpful, to back up off of Hope, because though she looks like she needs someone to hold her hand right now, she’s really quite fiesty. Do not touch. Haha 🙂 But before we knew it (or what felt like an eternity to Hope’s ITband) we were at the finish line.  And, despite everything, Hope PR’d, big time. 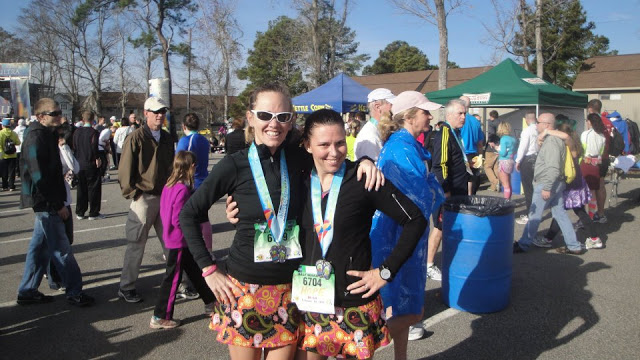 Hope hobbled over to the med tent for some ice, while I took on the duty of getting post race snacks.  People gave me dirty looks as I gathered enough food for the two of us, especially as I started dropping things I couldn’t carry.  I told one guy I was really hungry, smiled, and moved on. Haha.  After a post race snack of greek yogurt and bananas, we were able to see one of our favorite people & running moms ever, Christine, cross the finish line as a pacer for the full marathon a little while later. Of course, she left all of the people she was pacing in the dust, but finished right on schedule at 3:05.  Not her fault if the boys can’t keep up 😉 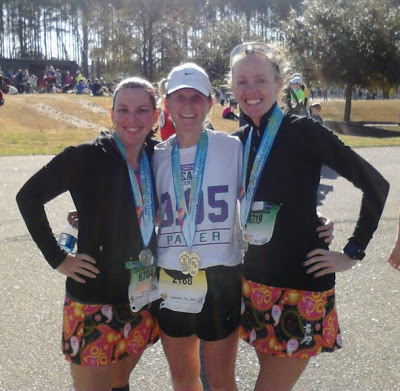 Another successful Myrtle Beach half marathon in the books.  Until next year my friends… 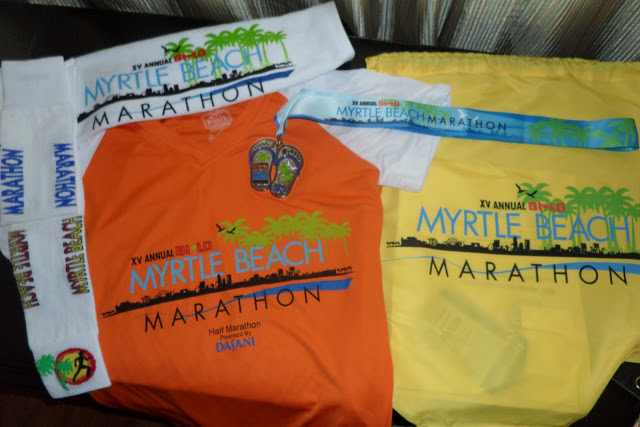