Though I often say it in a joking manner, I’m not kidding when I say I’m a fair weather obstacle course racer. I’m not above running in the snow, but draw the line at rolling around in the mud and cold water; it sadly doesn’t take much to send me into a pre-hypothermia state. I retire after Killington Beast in the fall and don’t come out of hibernation until all of the snow has melted off of the ground.     Yesterday, however, was a delightful exception to this rule.

A few weeks ago, a friend of mine found an unbelievable Groupon deal for a local, first time, 4 mile obstacle course race called Mass Mayhem that we could not pass up.   Held at the Blanford ski area in Blanford Massachusettes, Mass Mayhem is sponsored by Type One, LLC and would be benefiting the Faustman Lab at Massachusetts General Hospital in Boston towards finding new treatments for type 1 diabetes.

Now, here’s one thing you need to know about obstacle course racing in New England: if it’s held on any sort of ski area, you WILL be climbing UP ski slopes, numerous times.   Though Blanford ski area is no Killington, there was still a ton of elevation gain, and I was patting myself on the back for spending so much of my summer on the stair climber. 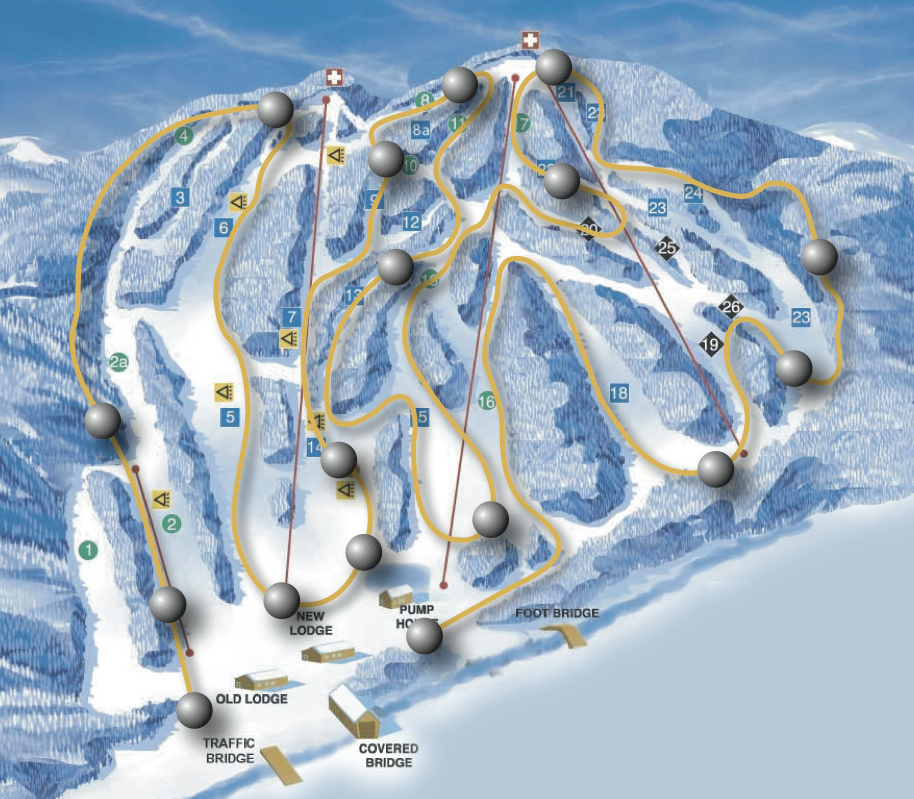 The race was about an hour and a half from our house.  Parking was the traditional $10 fee, though all proceeds again went to the charity.  We parked on site, so close that bag check wasn’t even really necessary.   But for those wondering, bag check was available (no cost) and quite convenient. 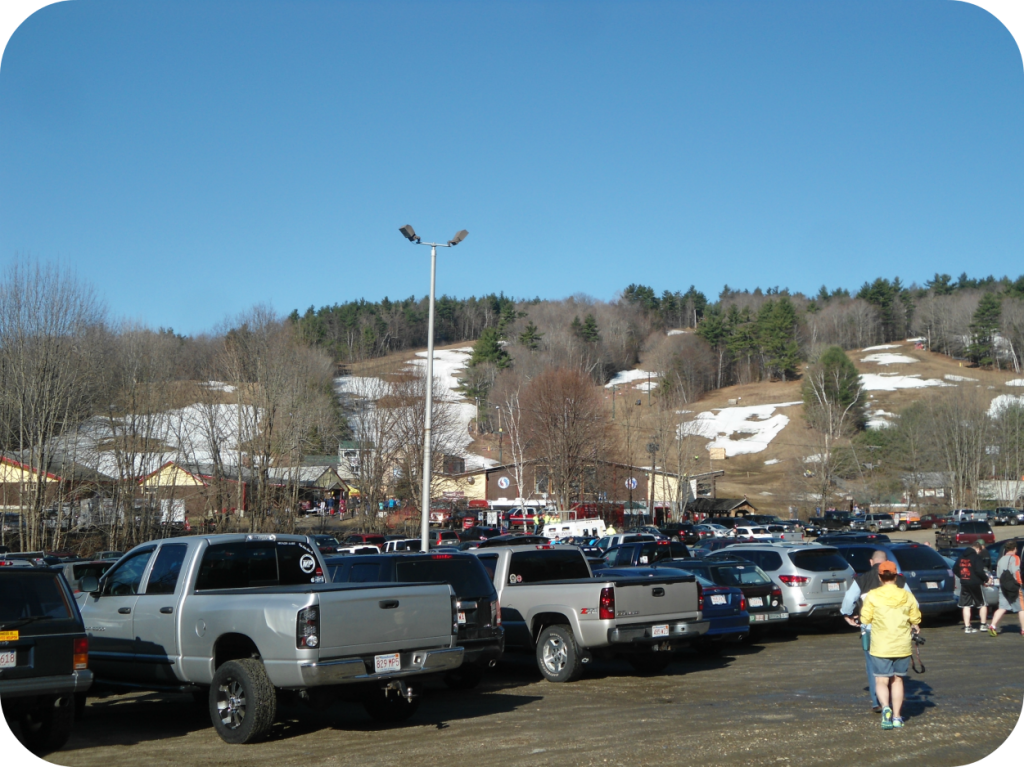 First thing I noticed: all of that SNOW.

Registration and packet pickup was equally as smooth.   Our bibs, t shirts,  wrist bands, safety pins, and other goodies (local coupons, advil samples, etc) were all neatly pre packaged into a ziplock bag.  Why don’t more race directors think of such things?

We shed a bunch of layers, took some pre race photos, and headed to the start corral. 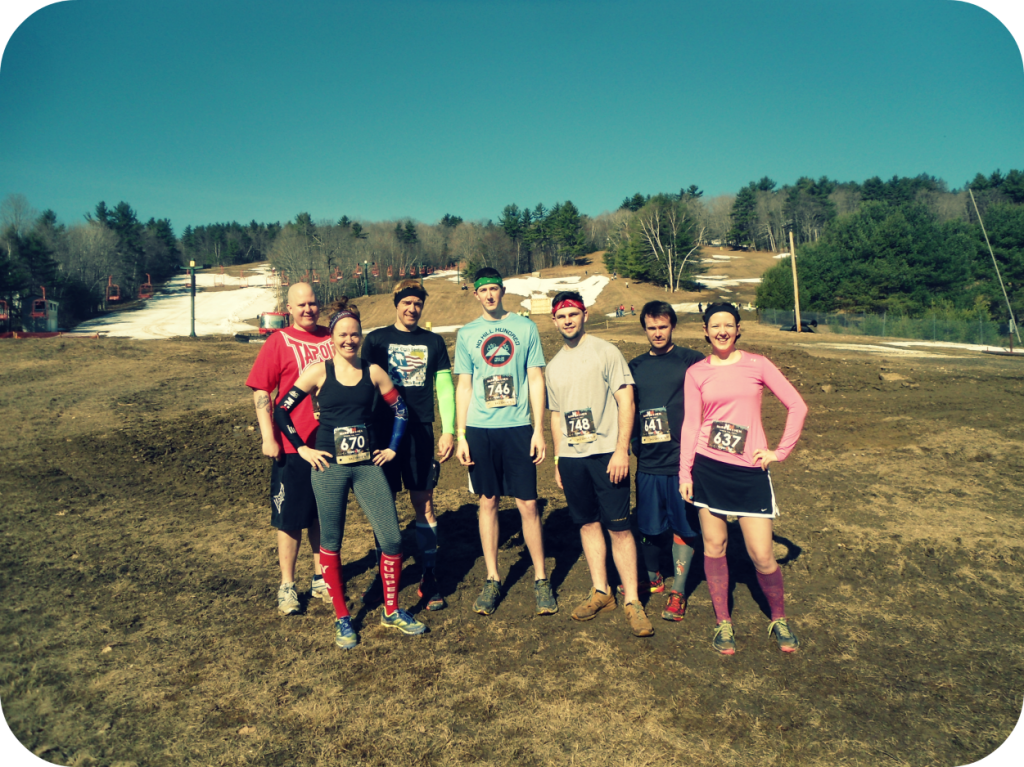 Truth be told, because this was a last minute and unorganized decision (on OUR part), everyone on our “team” had a different wave time.  However, the 9:45 corral only had a handful of people in it, so we made the executive decision to hop in.  After a few words from the race director, as well as warnings (and rightfully so) to beware of the ice on the course (!!) we were off.

Straight up an icy hill.

I barely made it 10 yards when I totally lost Geoff, because I found myself the one patch of ice that the new Reebok All Terrains were NOT designed for.  I actually fell forward and started sliding backwards, while laughing hysterically.  A girl behind me actually tried to stop me and push me forward.   Only in New England. 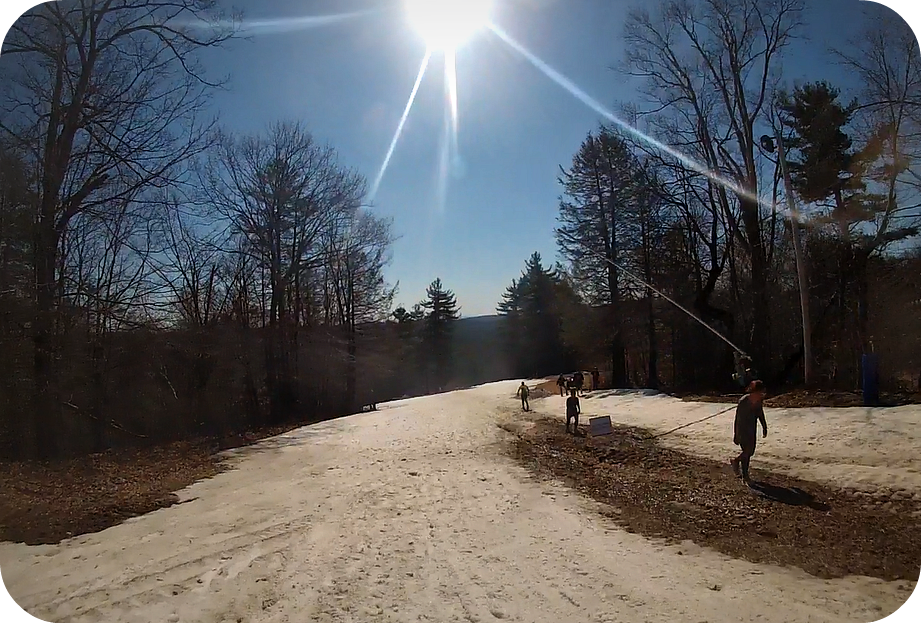 I finally got to some loose snow and was able to blow past a ton of people who were immediately slowed down by the climb.  I know I already mentioned it, but again, three cheers for spending my winter climbing on the stair stepper, what a difference it made for me.    These legs were ready to CLIMB.  We got to the top of the first long climb, ran down another slope, and hit the first set of obstacles….a bunch of over and under walls. 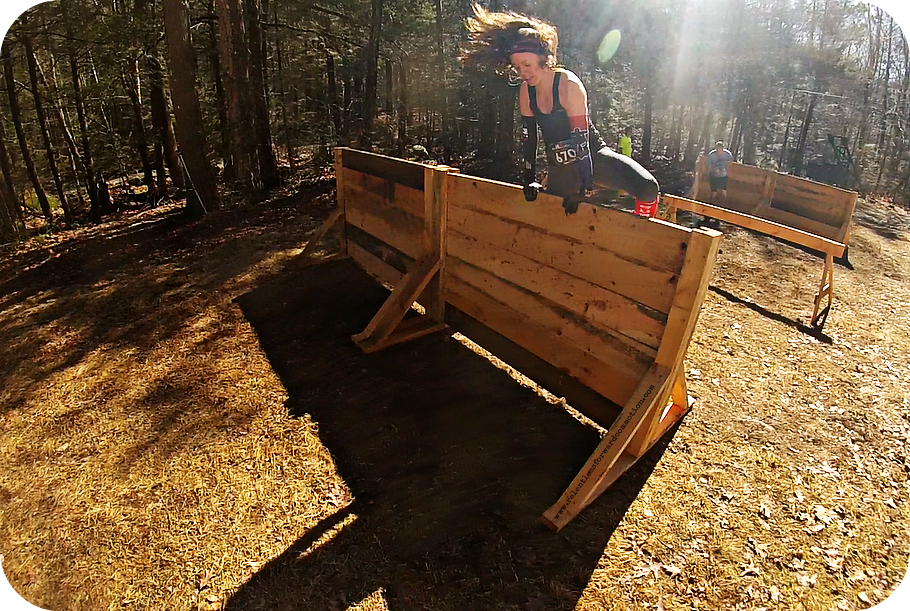 And after this hilarious sign, it was straight up the face of another slope. 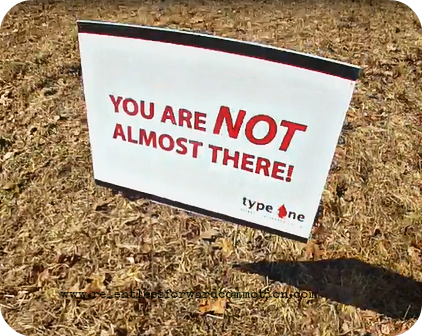 Geoff and I made a decent effort at pushing, but we weren’t “racing”.  There were numerous times we stopped to help others, stopped to fix my shoes (I was having issues), stopped to enjoy a drink at the water stops.    So, I won’t give a play by play of EVERY single obstacle…that’s what pictures are for.    It was pretty much standard Obstacle Course Racing 101:  Climb over things, climb under things, get muddy.   Geoff wore the GoPro, so here are a bunch of pictures of me, in no particular order:

6 foot walls? 7 foot walls?  I’m a bad judge of height.  I cleared them, that’s all that matters. 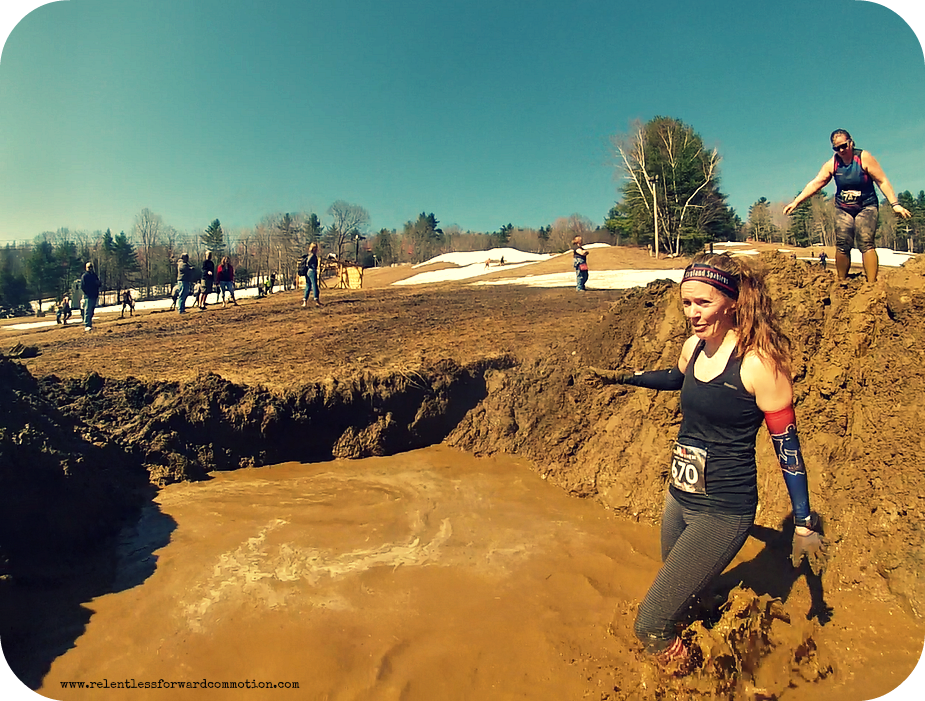 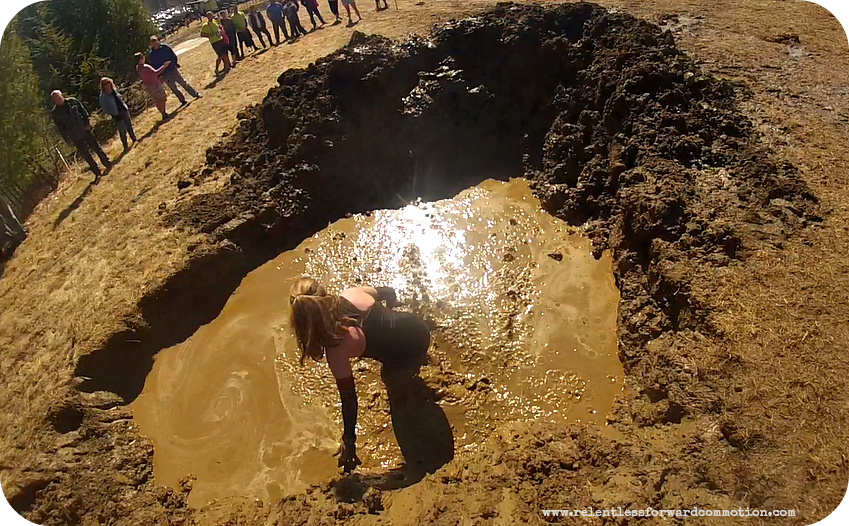 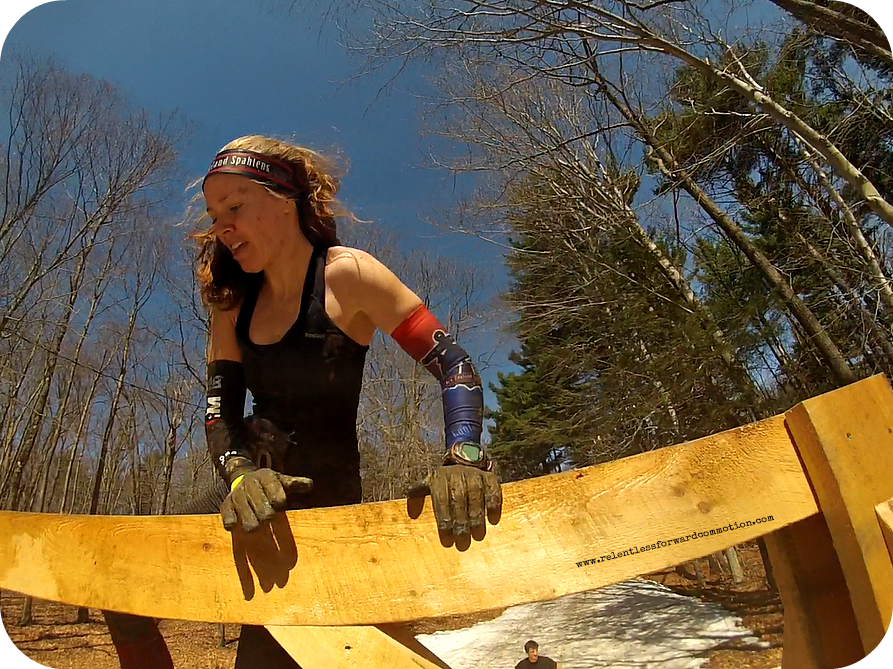 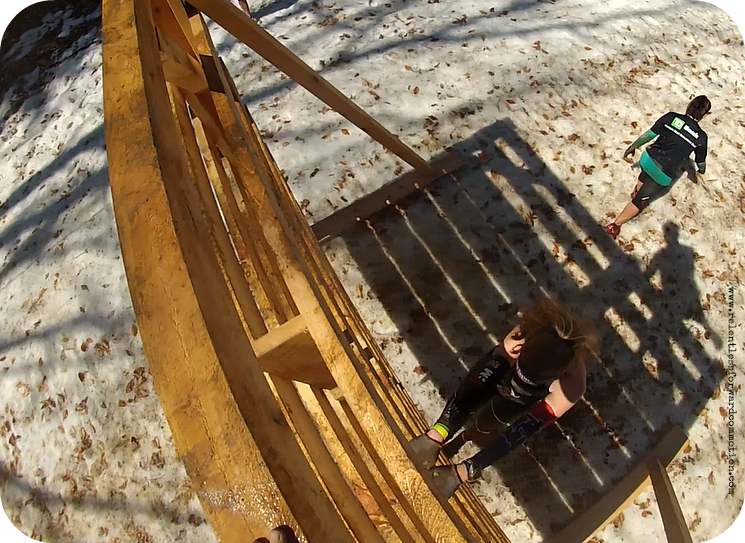 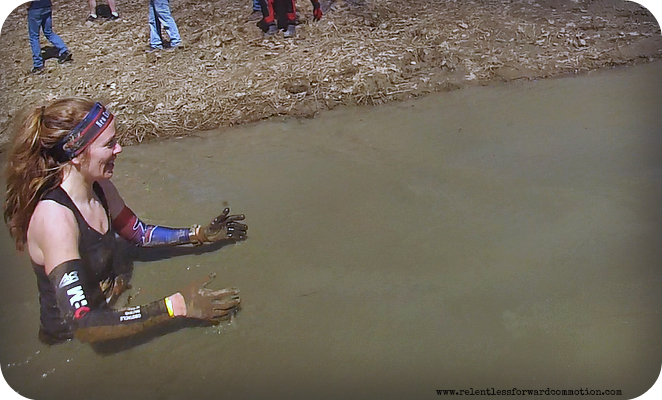 I was completely numb to the fact the water was so icy (pun partially intended) because I was too busy trying to catch one of the many frogs that were swimming around this “obstacle”. 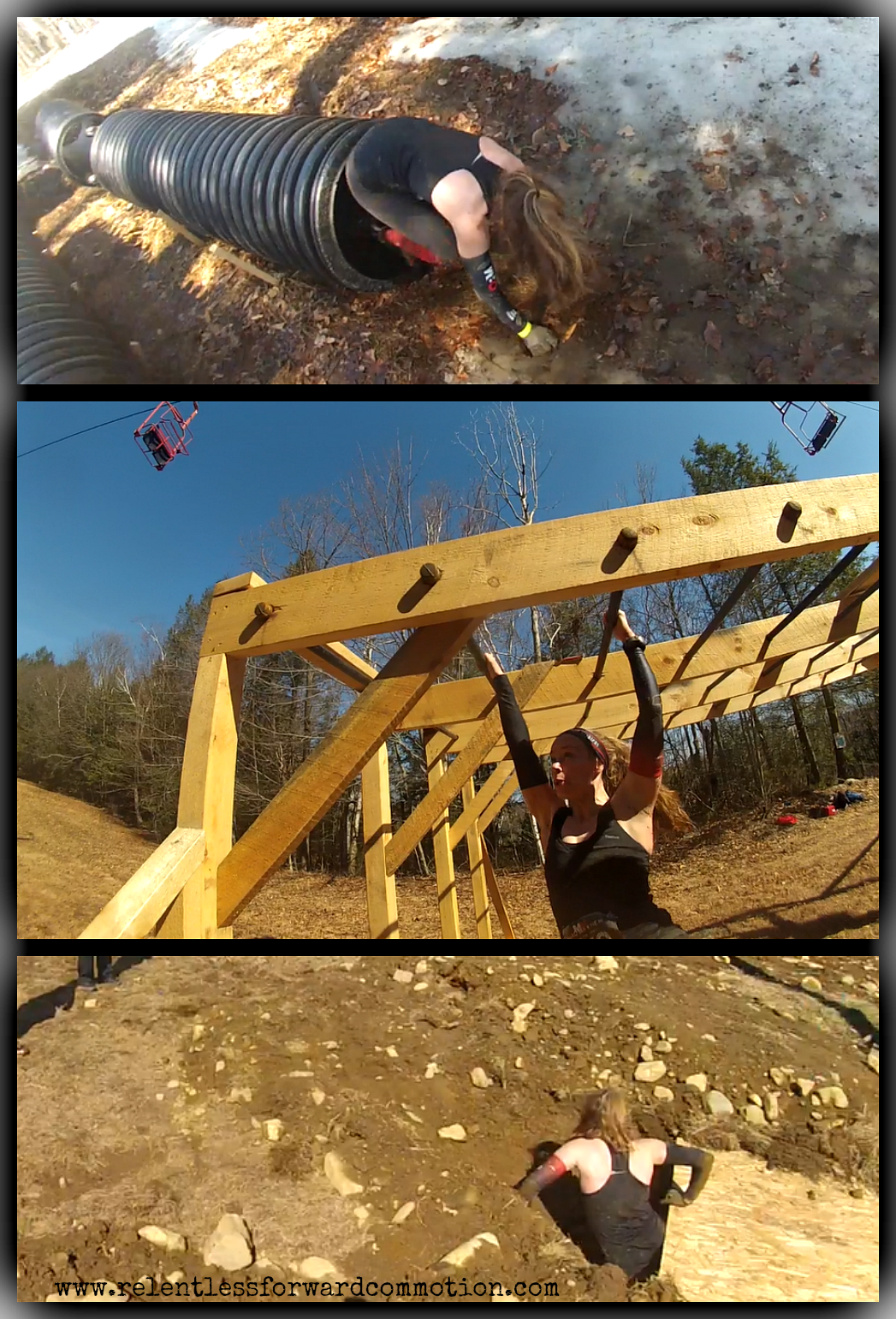 A sample of a few obstacles.

– AMAZING, friendly volunteers who were very well versed in their particular duty/obstacle.  Medics everywhere, which was reassuring.

– Awesome use of the terrain.  Not everyone may agree, haha, but if you have a ski hill, USE it.   Same goes for the ponds we waded through, which were freezing, in case anyone was wondering.

– The obstacles were spread out evenly throughout the course.  There was never a time where I thought “man we’ve been running/climbing FOREVER, when are we going to hit an obstacle?”

– Only one obstacle (cargo net traverse) had a bit of a line and thus we had to wait.

– The final obstacle: sledding. I was GIDDY when I saw volunteers about 250 yards above the finish line with a stack of sleds. I was told to get a running start and go.  I did, and I laughed like a little kid the entire way.  Bravo, Mass Mayhem, for keeping the fun in the race! 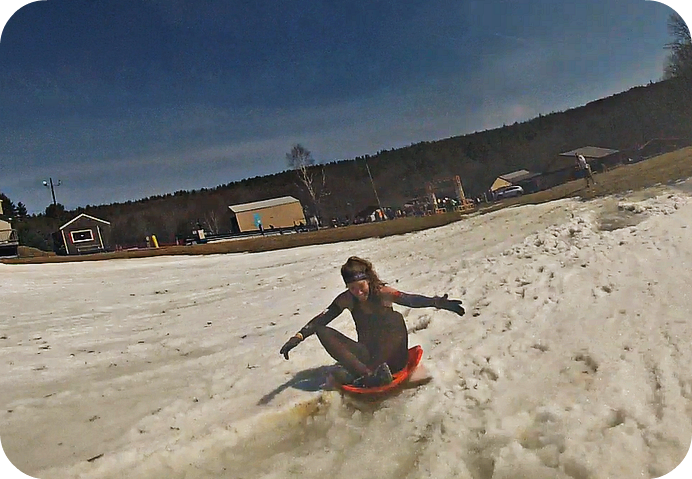 Seriously a first in my OCR career…

– Great swag:  Medals, tech shirts, and a Harpoon beer to all finishers 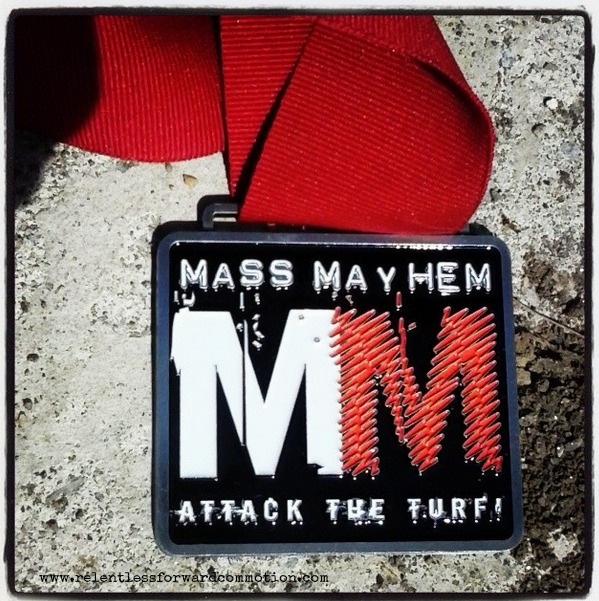 I don’t race for the medals, but I love them none the less! 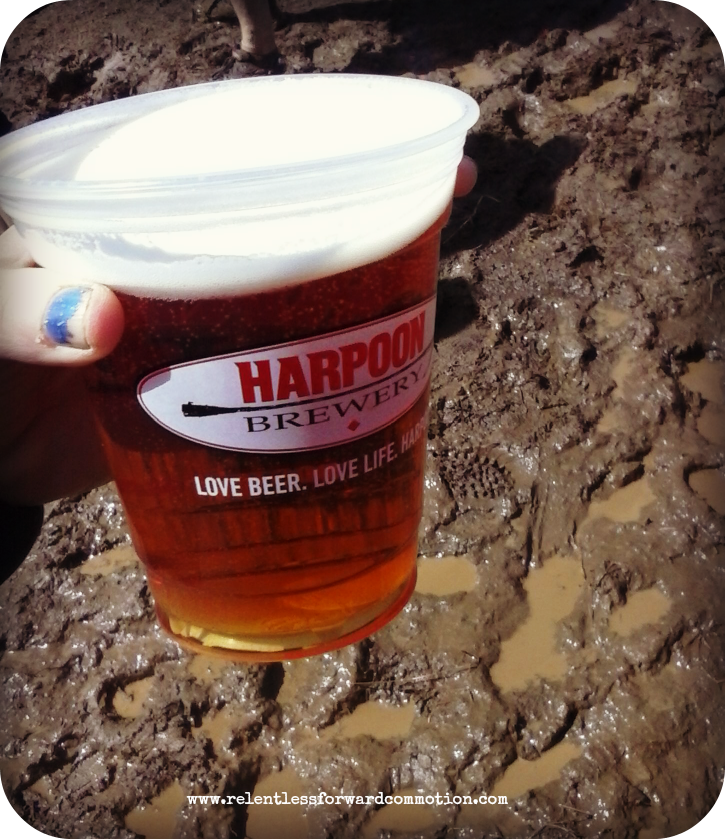 – Plenty of hoses to clean off, with changing areas.

– Finish line food included water and bananas; but there was plenty of other food and beverage available for purchase.

– Not an incredibly well marked course. There were a handful of times I wondered if we were headed in the right direction, and I also saw a bunch of people cut the course, though I’m pretty sure they weren’t aware they were doing so.

– Not enough obstacles. I think they could have added some more walls throughout the course to add to the difficulty.

Overall Race Review:  A-  This was clearly not a competitive race: no penalties for skipped obstacles (and people were skipping obstacles, which is fine, as this race was advertised as a “fun run”. )  The obstacles were not too terribly difficult, thus making this an ideal race for beginners…as long as they could handle the constant hill climbing.   That said, there were a few obstacles, such as the crawl through the underground tunnels, that certainly tested me.  The atmosphere at the start/finish line was fun (Geoff even participated in the Harpoon Brewery Beer Stein Hoisting contest!).  Everything, from registration to bag check to the finish line ran incredibly smooth.  The swag, as mentioned, was great.    It was well worth the cost of our groupon, but in retrospect, I would have gladly paid full price (especially considering the proceeds went to charity).

– I conquered the larger walls without any assistance (or use of the braces of the wall).

– Monkey bars…got em.   Finally getting my grip strength back.

– Hills didn’t hurt nearly as much as I expected.

This is obviously only the start of race season, but it was satisfying to see that my training over the winter has really paid off.  We finished in about 1:18, which wasn’t super fast, but according to the first set of results I saw, put me 2nd in my age group (though that might have been for my heat only. Not sure. )  I have a long way to go before the Vermont Beast again, but I feel confident to be where I am right now.    Time to get to work… 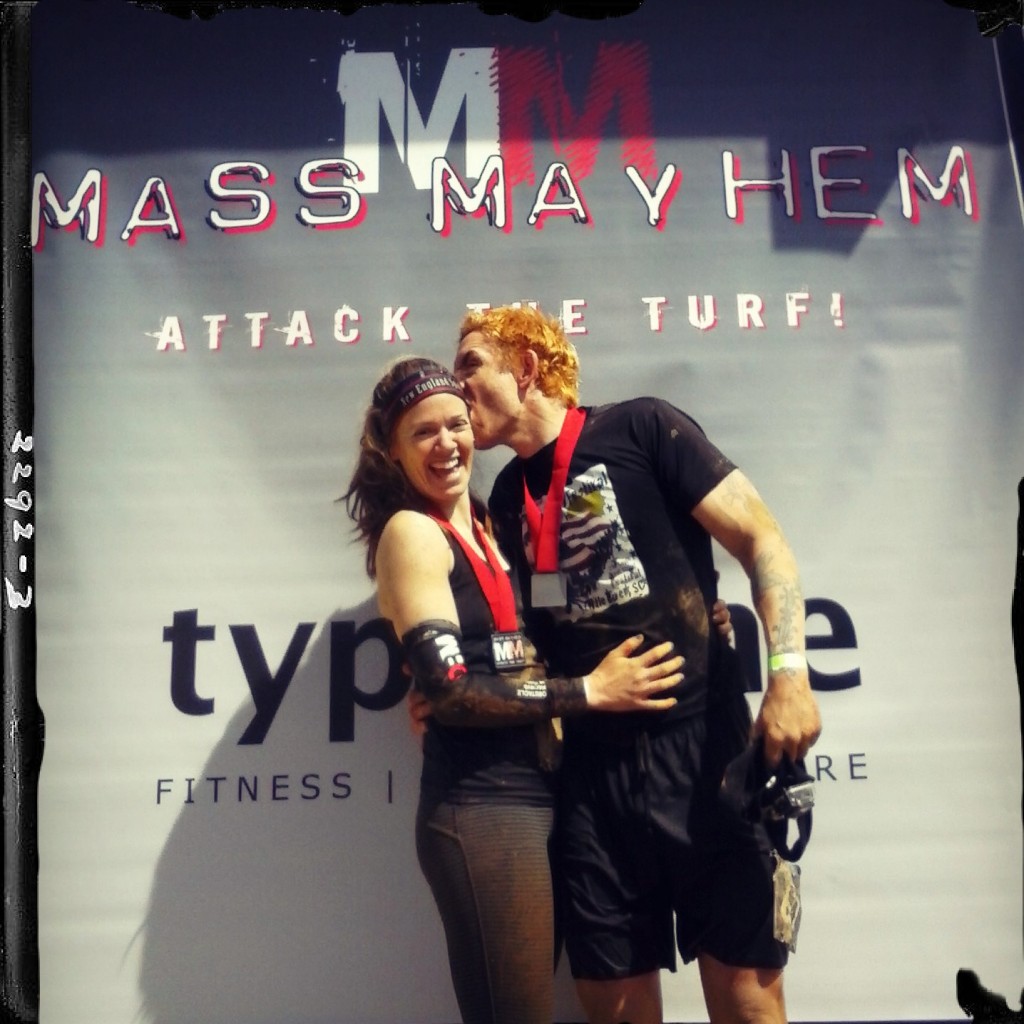