Our “kidderval” trail run last night was one for the parenting books.

This post started as a Facebook status update, but as I quickly reached the 500 word count, I realized perhaps it was better said on the blog.   So, 1500 words later, here we are.  My parenting skills, raw, unedited, and the perfect example of how two little human beings can age you ten years over the course of only 3 miles.

Part One: Do You Kiss Your Mother With That Mouth?

Not 20 yards into our run, my 7 year old falls, hard. Now as any experienced parent can tell you, when your kid falls, you FREEZE. You never, ever, EVER run up to your child and fuss over them, asking if they are alright, because this will let the child know there is potential that they are NOT alright.  It scares them and/or enables them, take your pick, and the crying (or screaming even) may begin, even if the child truly is unscathed.  I am far from a perfect example of a parent, and there are so many things I don’t know about parenting, but I know this fact to be 100% truth: when your kid falls, the best protocol is to do absolutely nothing for a good 15 seconds or so.  Let them make the first move. Let them decide if they are OK, and then react accordingly.   When they stand up and brush off the fall like it was no big deal, you smile, and stuff the terrifying feelings of “I JUST SAW YOUR HEAD LAND MERE INCHES FROM SLAMMING INTO THAT MASSIVE ROCK” deep down inside.  Trust me, forget it even happened, this is for the best.

But back to the story: Kain falls, and he falls hard.  I even notice that he lands on one of those very spiny, spikey pinecones, right under his ribcage, on his bare skin (this kid only wears the minimum amount of clothing necessary in any given situation.  Probably a future nudist, but I digress).  I cringe. There is no way we are getting out of this one blood free.    Following aforementioned protocol, I freeze, even though I realize he’s got every right to freak out over this fall. I’d probably cry too.  Kain sits up, his eyes as wide as a baby deer.  He takes in a sharp breath, peels the pinecone off of his side (it is literally stuck into his skin), lets out a long moan….

…and hops up onto his feet.  “I’m good! I’m alright!” he declares, as he takes off running down the trail, knees covered in dirt, pine straw sticking out of his socks.   While I’m utterly shocked, I do not question his self assessment, and run along behind him.

A few minutes later, we catch up with Geoff, Rowen (my 9 year old) and our friend Paul.   They had stopped to wait for us, so once we catch up, we all stop to walk for a minute.  I tell them that Kain took quite the fall, and Kain proceeds to happily and confidently retell the details of his experience.

As any parent who has the privilege of hearing their kid swear can attest (especially when they swear in front of other people, I can see Paul’s jaw hit the ground), hearing a word like “f*ck” come out of your 7 year olds mouth hits you like a whiffle ball bat to the stomach.  Except when you get hit by a whiffle ball bat in the stomach, you have the wind completely knocked out of you, and you cannot speak.  When your kid curses, you instinctively and immediately raise your voice to a decibel you didn’t even know you were capable of, while scolding them using their ENTIRE name, first, middle, and last.

I’m quickly reminded that about a month ago, I told the boys they could swear, but ONLY on trail.  What I meant, of course, was they could use the term “badass”, because frankly, when your 7 year old comes barreling down a steep trail in the dark, lit only by his headlamp, well that is indeed pretty badass.  I amend my previous declaration, reminding BOTH of them that the word “f*ck” is reserved for adults only, and I don’t even want to have to remind them of such things until, I don’t know, age 13.  MINIMUM.    They shrug, instinctively reply “yes ma’am” (Southern boys here, folks) and we continue on down the trail.

Gray hairs. I feel them growing in by the second.

Part Two:  The Birds and the Bees.

Paul is one of our regular running friends, and a fellow ultra runner, who happens to be an emergency room nurse. While asking Paul how his weekend at work was, he mentioned they had to perform an emergency C-section. Rowen, not missing a beat, says to Paul “do you work in a Vet office?”

Paul replies “No, I work in an emergency room, for humans.”

Rowen ponders this for a few seconds, then says “Oh, well that confused me, because why would you ever have to cut a baby out of a woman’s stomach?”

So Paul and I very vaguely explain how sometimes babies have to come out of their mom’s belly very quickly, because there is an emergency, or the baby gest stuck. I brace myself for the question of how they normally come out, or better yet, “get stuck where?”

Rowen is 9.  Believe it or not, in 9 years this conversation has NEVER come up.    But I know that at age 9, it’s probably about time for a little basic “birds and bees” explanation.  So I figure, what better time to discuss where babies come from than in the presence of a medical professional?  Yes Paul, you almost got caught in the middle of this classic, sometimes awkward, parenting moment.  Welcome to the trail family. 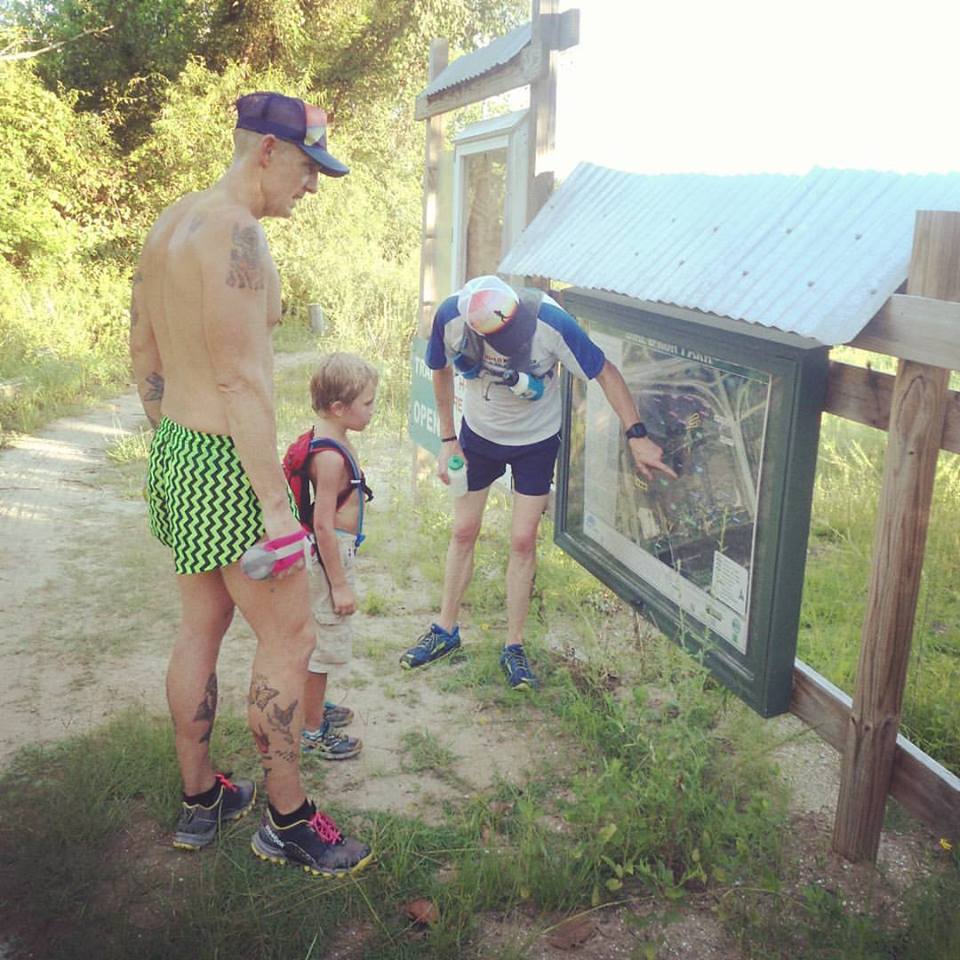 Alas, Rowen didn’t ask. The explanation of “sometimes they get stuck” seemed to be satisfactory.  Chances are, he probably already knows more than I give him credit for, and I made a mental note that it is time for a little elementary school appropriate sex-ed.  But regardless, at that moment, I let out a sigh of relief.

Part 3: You’ll Shoot Your Eye Out.

A while later, Rowen and I go our separate way to head to the car, while Geoff, Paul, and Kain put in an extra mile. Rowen is the oldest, but he doesn’t quite have the strength or endurance his energizer bunny of a little brother has.  So we often end our kidervals early, and I’ve come to enjoy the few minutes I have alone with my oldest.

While walking down the trail Rowen and I talk about a plethora of things, like the rabbit we saw, about how he wants to learn to scuba dive and “explore” the world for new animals, how the ocean is still more of a mystery to us than the surface of the moon, you know, kid stuff. Then out of the blue he says “Mom? Is Santa Claus real?”

Only I didn’t say “Fudge.” I said THE word, the big one, the queen-mother of dirty words, the “F-dash-dash-dash” word!

(Actually, I said f*ck in my head, not out loud, I promise Kain didn’t get that word from me.  But what better time to quote the best Christmas movie ever). 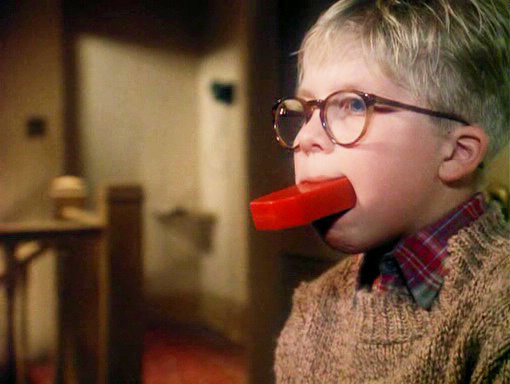 I’m blindsided. It’s July.  JULY!!! These sorts of questions should be reserved for, say, November through January. Now I’m all for letting this kid grow up. I try to be honest and transparent with him about life.  We discuss politics, ethical treatment of animals, and current events with this kid.  Hell, he just left the library today with a book on WW1 and another about the Nazi regime in Denmark. He’s very smart and very grounded for his age.

But Santa!  The most magical memory I have from my own childhood.  One of my favorite parts of parenting.  I’m not ready to let this one go.  At least, not in July.

So I tiptoe. I return each one of his questions with a question of my own, feeling like a fool.

It was a real show stopper performance, I tell ya.  I felt equal parts idiot and asshole, and I’m pretty sure he could see right through me, but I panicked, I truly panicked.   Eventually I rambled on something about how Santa is real in all of the hearts of the people who truly believe in him…and then I changed the subject.  And offered to give him a piggyback the rest of the way to the car.

My distraction worked, because next thing you know we were discussing why the pine tree saplings under the power lines were dying.  While Rowen pondered the possibilities of radiation or perhaps pesticides, I gave myself a stern, internal lecture…while praying I just bought myself at least another month to gather the courage to tell him the truth.

Kids, I tell ya…I love them so much it hurts. 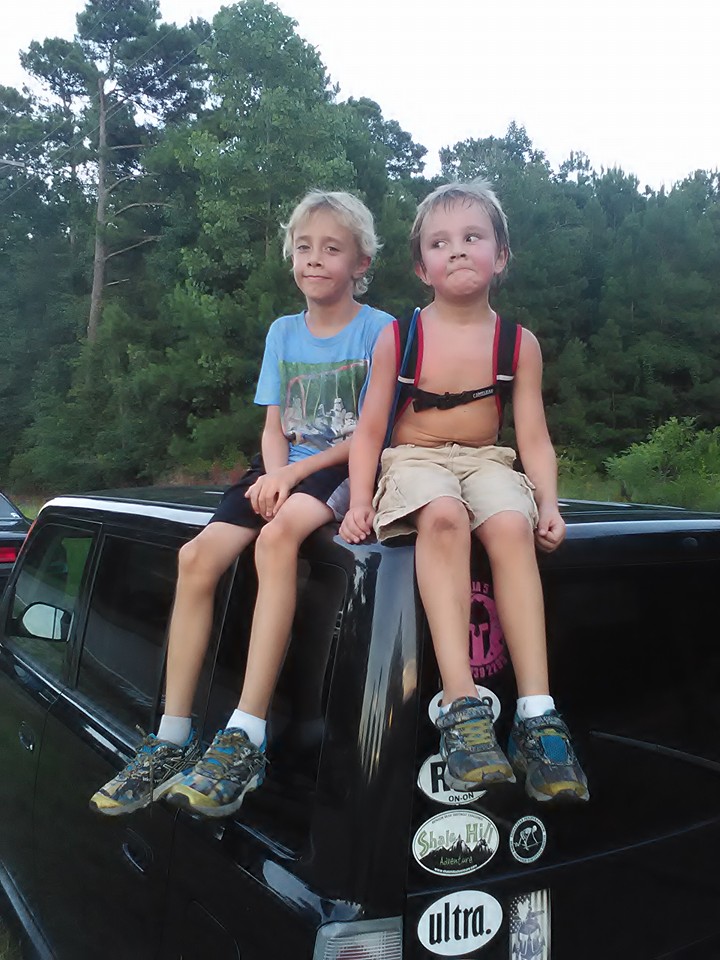