This week’s “bada$$ Mom’s Monday” (err, Tuesday)  is being replaced with a race report, because, I’m a mom (and therefore my vote automatically counts twice), and, well,  the race was bada$$.   The one year anniversary of the Spartan Race Hurricane Heat.

Let’s rewind with a little history, since everyone keeps asking “what is this Hurricane Heat you speak of?”  A quick description from Tommy Mac (hander-out of many burpees this past weekend):

“The Hurricane Heat started in August of 2011, when Hurricane Irene forced the cancellation of our Sunday program at Amesbury, Massachusetts.  Even with thousands of bummed out racers, no one was more devastated than our founder, Joe Desena.  So, he gathered 150 athletes and Spartan staffers at 5:30am on Saturday morning, handed them some sandbags, did a boatload of burpees, and proceeded to spend more than 3 hours covering less than 4 miles.  Needless to say, there were some very tired people when we got done.  30 days later, we decided we’d have a Hurricane Heat at every event in 2012.”

The Hurricane Heat is noted to be tougher than the race itself, and focuses on survival as a team.

“You will be assigned to a team.  You will rely on that team, and they will rely on you to get every single member of your team to the finish line. You will not  leave anyone behind, even for a minute.  You will finish as a team.  If you leave members of your team behind at any time, your team will be penalized.  If you continue to leave team members behind, the entire group will be penalized until everyone can learn to work as a unit.”

I had heard rumors (and read in emails) that being the one year anniversary of the Hurricane Heat, and the fact that the Death Race was so wildly popular this year, that the “theme” would be Death Race related.  That fact was confirmed to me when I not only received a mandatory gear list for the HH, but found out that my list was different from others….who was different from the next.  That’s right, multiple gear lists.  Which one was correct? No one knew.

Mandatory Gear List:
All athletes MUST wear a black shirt.  Can be a t-shirt, sports bra, tank top, whatever you want, but it must be black.
1 camelback, backpack, ruck, purse, whatever you want to call it.  You must be able to carry the items below.
One Black Sharpie Marker per athlete.
1 bandana
1 Grade A egg, white or brown.  Not hard boiled.
1 pair of flip flop sandals per athlete.  You must have your own.
1 extra pair of white socks (in addition to whatever socks you have on your feet).
2 energy gel shots or energy bars, any flavor.
1 jump rope per team.  If you own it, bring it.
1 candlestick per person
1 lighter or book of matches (so you can light the candle, Dummy).

Now, don’t get me wrong, I didn’t race the Death Race. But just being a part of it as a volunteer gave me the insight to the way the founders of Spartan Race work.  They want you to challenge YOURSELF.  Therefore, don’t believe a word anyone says, don’t expect anything but be prepared for anything, and above all, DO NOT GIVE UP.

Geoff and I left Vermont at 2:30 am on Saturday and headed to Amesbury, MA, the site of the 2012 Spartan Sprint.  Somewhere around 4:00 am, I got pulled over. I was speeding. I honestly didn’t realize it, but I was indeed going more than a bit faster than the speed limit.  I told the officer where I was going and apologized for my infraction.  He took my information and documents and headed to his car.

A few minutes later he returned with an awkward look on his face.  “Ma’am…your record is clean, no past speeding tickets.  However, your license is suspended. ”   My stomach hit the floor.  Looking back, there is no reason why my license would be suspended, but at the time all I could think was, forget the spartan race, I’m going to jail. I croaked out some sort of terrified “WHAT DO YOU MEAN MY LICENSE IS SUSPENDED?!?!”  to which the officer started laughing and said “just kidding! I had to give you a hard time since I’m letting you off with a warning. Please slow down”.

At that moment, I could have swornJoe and Andy sent that officer after me to start the mind games already….

We arrived at Amesbury Sports Park in time to use the port-a-potties before thousands of athletes and spectators arrived (always a bonus, as any athlete will tell you) and then were told to head about a half mile up the road to the next parking lot.  It was about 5:30 am.    At the second parking lot I had just enough time to put on my CEP calf compression sleeves (and thank goodness I did) before Joe started yelling at us to get into teams of 25, and to do it fast, or there would be punishments.   The truth is, when Joe is around, there are ALWAYS punishments, even if you complete the task in a timely manner. 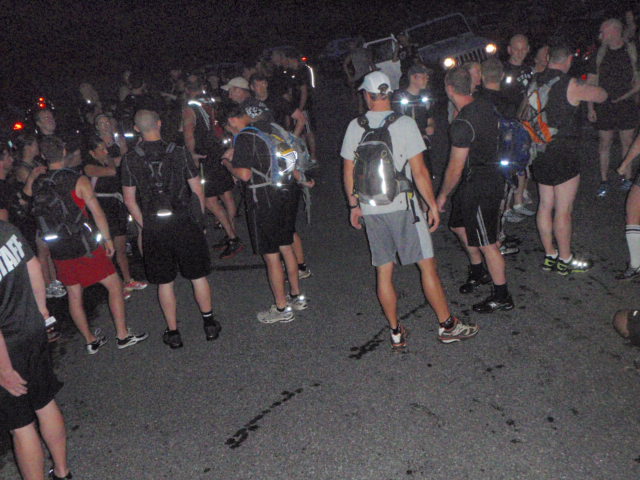 I quickly jumped into the closest sea of people, where I already recognized a few faces from the Death Race.  We were told to pick a name (and pick it fast) and before I knew it, I was part of  Team “Junior Varsity Ninja Death Squad”…Or “ninjas” for short.

And then the burpees began.

We were told to do 30 as a warm up.  When some people reached 30 and stopped, Joe shouted “why are people standing around? Do 30 more.”  And when they reached 60, it was “I didn’t tell you to stop yet, 30 more!”   Eventually we had done well over a hundred burpees.

We were moved maybe 50 yards across the parking lot to a dirt road, where we were told to line up in single file in our teams and count off. That would be our number, we were not to forget it. I then became “Ninja 5” for the rest of the day.  We continued with burpees, crunches and jumping jacks.  We were moved to the road. Some people kept burpeeing, some people kept crunching, some started buddy carries up and down the hill. Basically, if anyone of from Spartan HQ told you to jump, you did it. 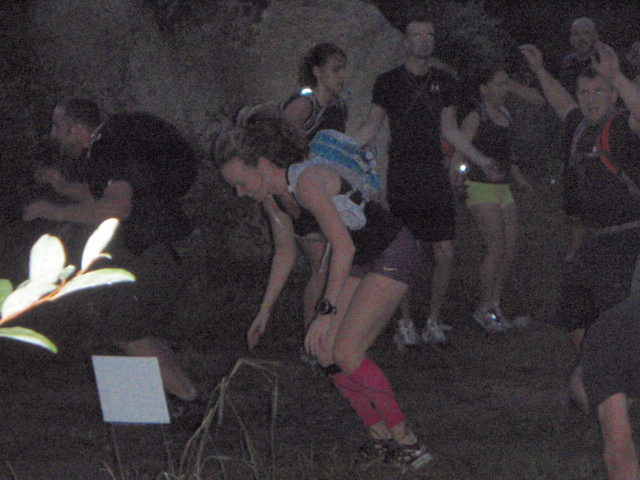 Before you knew it, we were all laying on the dirt (and by dirt, I mean giant rocks digging into my spine) road, doing some sort of crazy “rocking chair” team move.  Which I’m sure works great with 5 or 6 people in one of those silly team building exercises your freshman year in college.  With almost 200 people it’s near impossible 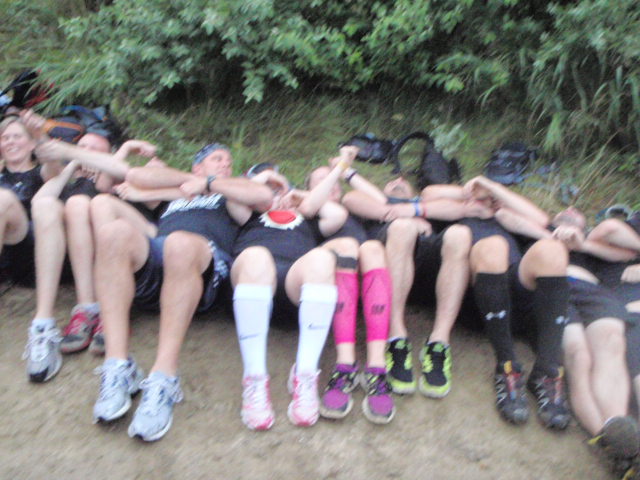 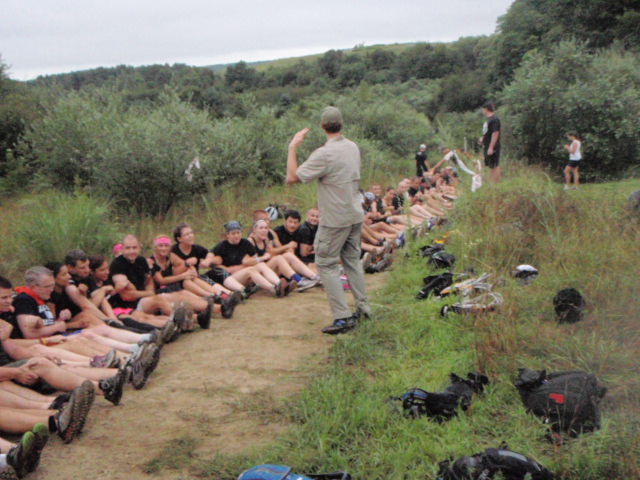 When that didn’t work, we moved on to a girl stepping on each one of us as she counted off in French. We were told we better remember our number-in French-or else.  I forgot it the second she stepped on me.  And then the army crawling began.  Over our knees and shins. One after another.  I’m not going to lie, it sucked.  Taking a knee to your shin or a foot pinching your calf to the gravel never feels good.  So why do it?  I’ve decided that the Spartan founders, no matter how many times they tell you to quit, really hope for the oppostie. They want to see you succeed. They want to see you push your mental and physical limits, waaaaay out of your comfort zone, and never, ever quit.  That said, I’m pretty certain they come up with this crazy stuff totally on the fly, total improvisation.   It’s really quite hysterical. 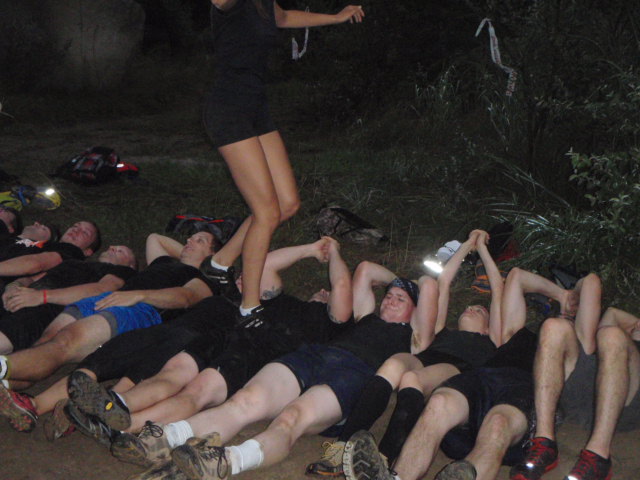 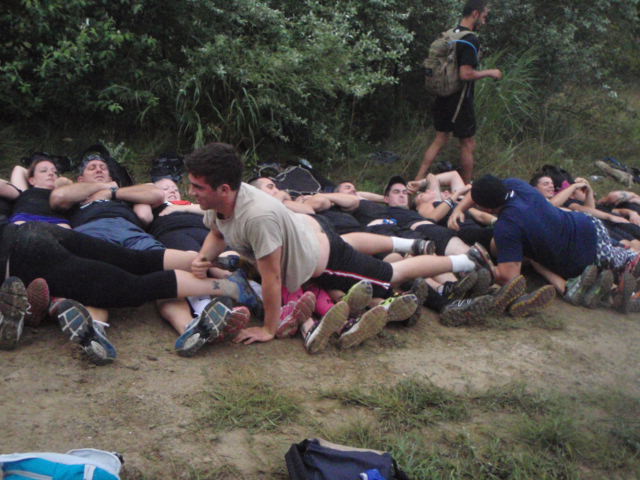 And then we started running.   I’m almost certain I could not sit here and describe, task by task, what we did.  3.5 hours worth of Spartan tasks, hundreds upon hundreds of burpees. We covered the course, and then some, multiple times.   So instead of tell you, I’ll show you just a fraction of what we did:  (HUGE thanks to Richard Ricciardi, Amanda Ricciardi’s dad, for these amazing pictures below) 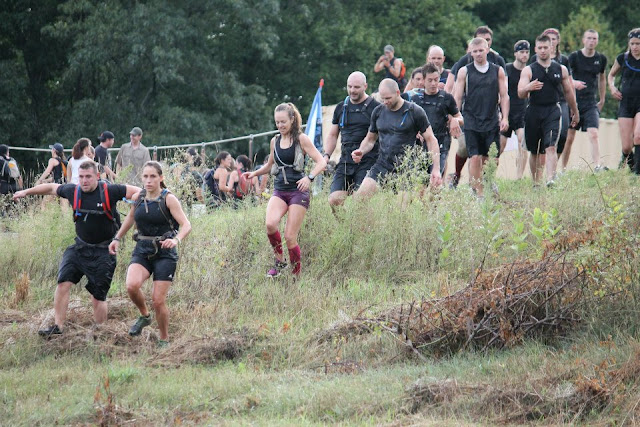 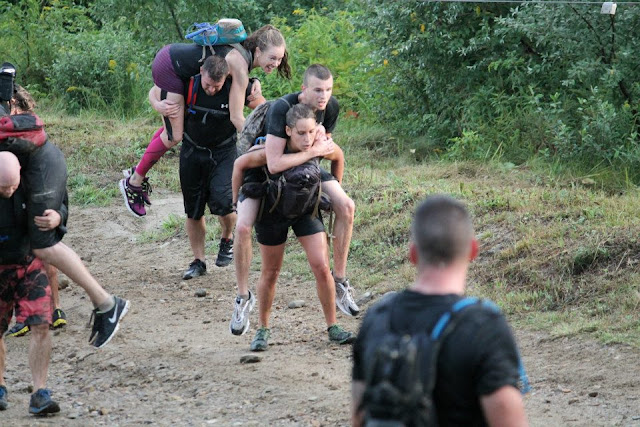 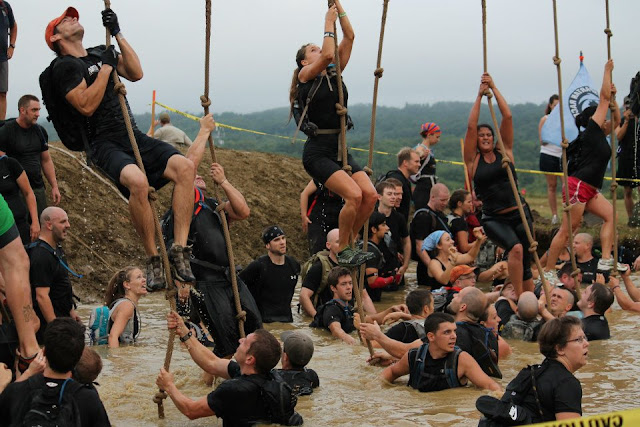 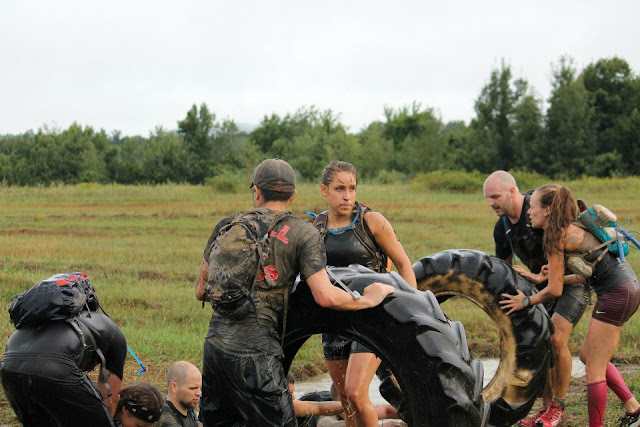 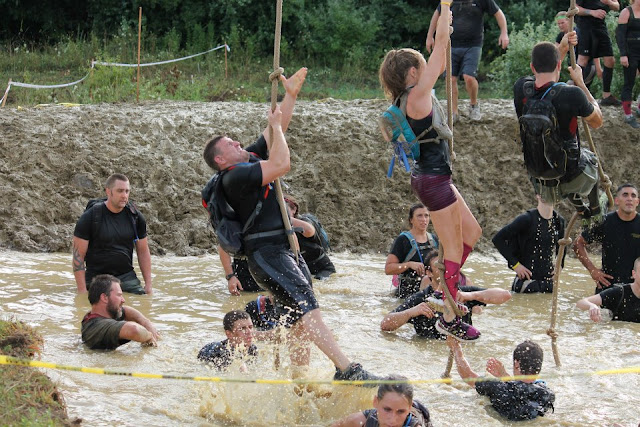 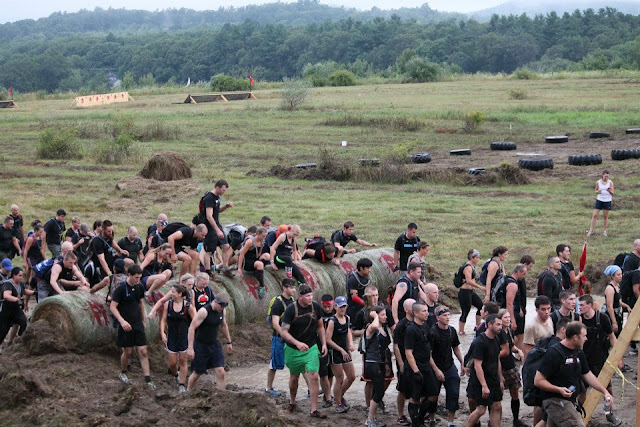 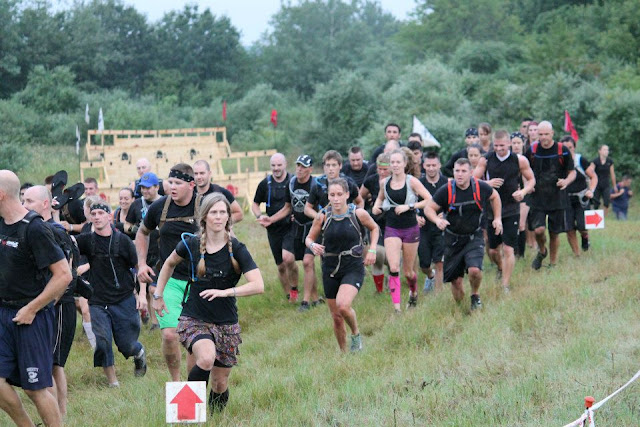 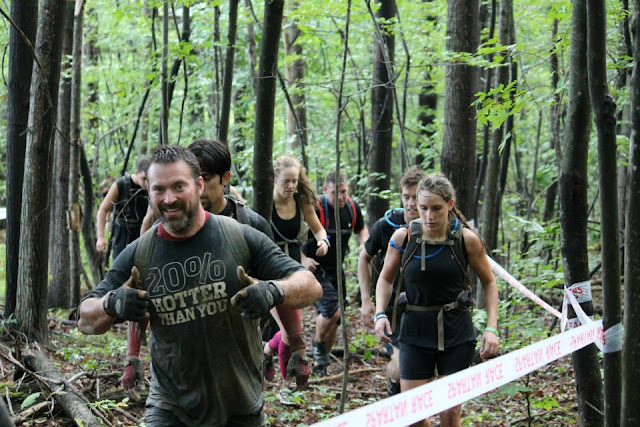 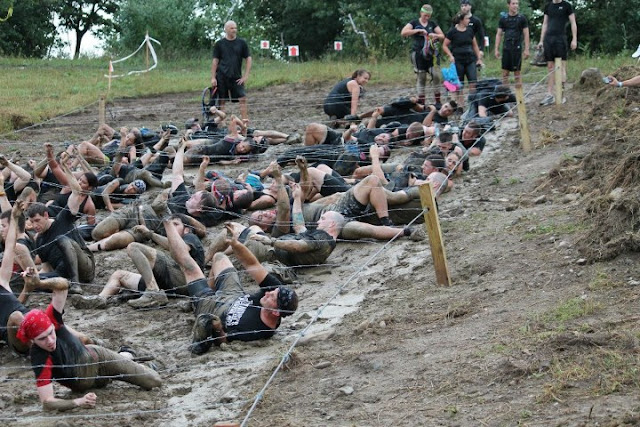 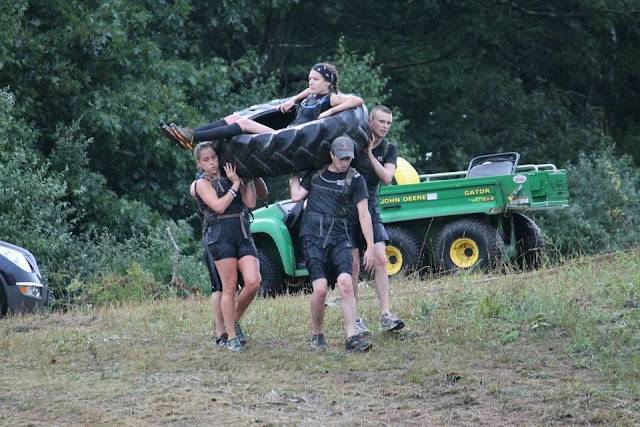 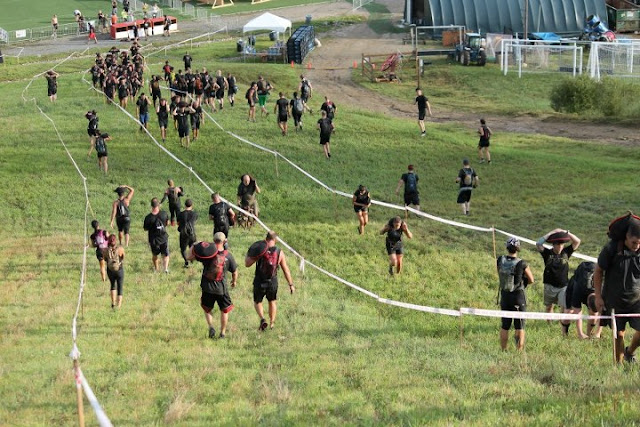 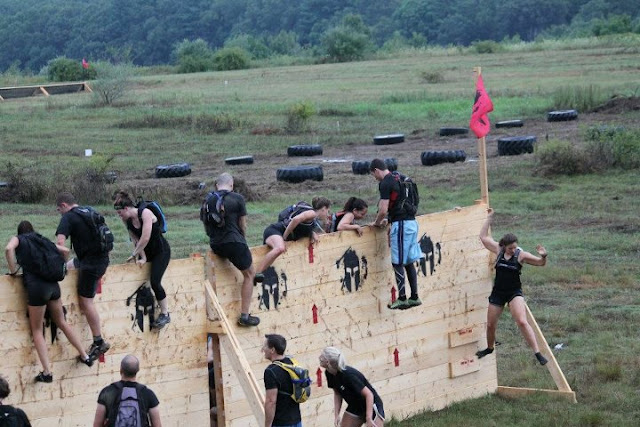 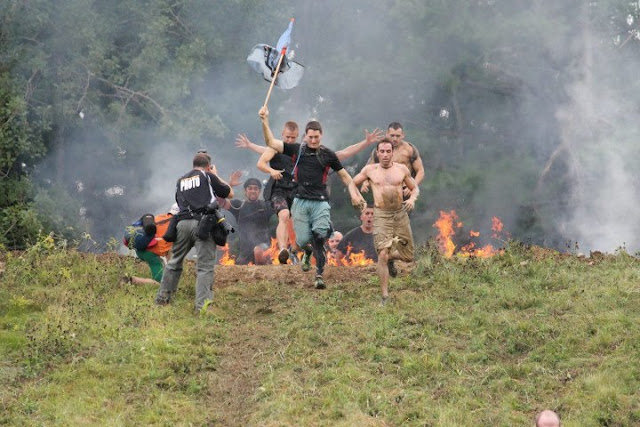 This was NOT a race.  This was NOT a competition to see which team was the fastest or the strongest.  This was an event put together to push all of our limits, and to work together to complete the tasks at hand.  In all 3.5 hours, with all 150 + people (I honestly don’t know the exact numbers) I never ONCE heard a complaint.  Not once.

A few sarcastic “eww I don’t want to get dirty!” comments, but never a complaint.  I watched one amazing “ninja” on my team complete the event with a sprained ankle and to add insult to injury, a hornet sting on the same ankle.  I saw another girl who was scared of the larger walls being helped up and back down again, with compassion,  by her teammates.  I saw another who got a horrible calf cramp, and NUMEROUS people reached into their packs to see if they had any salt tabs or nutrition with extra sodium.

They say a “Spartan’s true strength is the warrior next to him”, and the Hurricane Heat proved that to be true.  I’ve said it before in the general endurance community, but I’ve never felt a camaraderie like I have in the Spartan family, and I’m truly honored to be a part of it.

If you ever have the chance to participate in a Spartan Race , do it. If you ever want to push your limits even further, sign up for a Hurricane Heat.  You will not regret it.

Oh, and incase you were wondering, other than a quick egg toss at one of the walls, we never did use any of the mandatory gear list.