Let me preface this for those of you coming here via Google looking for play-by-play Death Race reviews:  I did not participate in the race as an athlete. I was, however, a participant in the madness from a totally different point of view: that of a volunteer coordinator for the race.  And even though I did not race,  I still didn’t sleep. I still found myself deep in the woods.  I still had no freaking idea what was going on for most of the race.  I still stared at Andy and Joe, baffled in shock and awe, of the tasks they doled out to the death racers.  And I’m still not sure, 3 weeks later, if I can even wrap my brain around what occurred that weekend.

But I had a blast.
And I did not get trench foot.Win/win.
Let’s start from the beginning, with how I got roped into being one of two volunteer coordinators for the race.  And the answer is, I have no idea.   A series of emails between myself and one of the race directors about something unrelated and the next thing you know, I have not only volunteered for the race but I am in charge of wrangling the rest of the volunteers.  I love a challenge.  And  I am so glad I stepped out on a limb to take on this one., for as cheesy as it sounds, it really changed my outlook on a lot of things.    I went in somewhat blind to what I was about to face, but thankfully, my coordinating partner is a Death Race veteran (as a racer) and knew the ins and outs of the Amee farm and Pittsfield VT.
I’ll spare you all of the details of the actual coordinating part, as I’m sure most of you are here to read about the race itself.  But I will say this: our volunteers were AMAZING.  And that’s a massive understatement.  I can’t tell you how many times a few of them hiked up and down mountain sides, or sat in a cabin at the peak of a mountain, alone, for hours, or pulled all-nighters just to supervise wood splitting, or sat in the hot sun directing traffic…you get the idea.  As an athlete myself, I’ve always been told and *thought* I understood how very important the volunteers are.  And I’ve always thanked them for their help. But it wasn’t until now that I realized how truly imperative the volunteers are, as events simply WOULD NOT HAPPEN without them.    So , to all of my new Spartan family in your fluorescent-neon-Day-Glo yellow “DR” shirts….simply put, you guys rock.
Now, here’s what you need to know about the Spartan Death Race.  It’s nothing like the other Spartan Races.  Instead of showing up in your shorts, VFF’s, and not much else, expecting to get doused in mud and drink some beer at the finish line, you show up like this:

…with no idea how long you will be on the course, and no set finish line.  And you carry all that stuff, and more, for hours.  Actually, make that days.  Hell, the website is http://www.youmaydie.com/  and I’m almost certain they are not kidding. 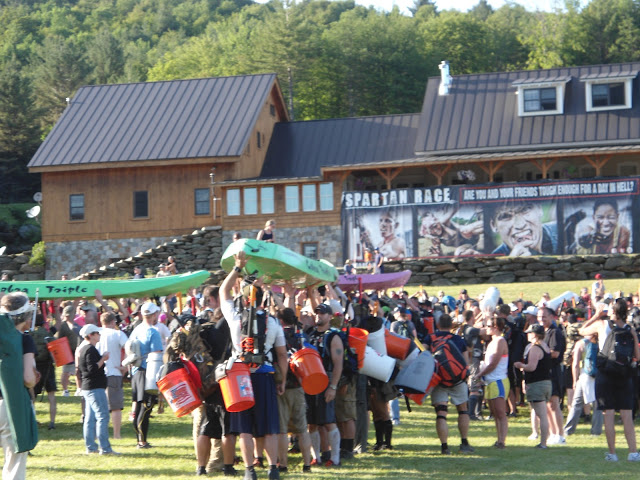 I can’t even begin to tell you the exact order of events.   There was hiking. Tons and tons of hiking with a lot of heavy gear, including buckets, shovels, bags, and kayaks. And tires.  And swimming in duck ponds trying to find a ping pong with your number on it.  They chopped  wood.   Fixed a gravel driveway. Took a 3 hour (rumor had it) written exam. (I saw the exam and it made MY mind spin).  There were cheaters, sentenced to sit waist deep in a duck pond for 6 hours in 40 degree temps at 2 am (the non cheaters only had to serve 45 minutes).    Carrying logs up and down a mountain. Carrying 60 pound concrete bags up and down a mountain.  And then there was the rolling. An obstacle you would literally have to see to believe.  A ¾ of a mile track with various obstacles, including rolling UNDER a black tarp (it was like 90 degrees out) and over a bucket filled with bio hazardous material (aka, sheep intestines that were rumored to sit out in the sun for  a few weeks)  At the end of the ¾ mile roll, where keep in mind, you could not get up off the ground, you had to sit up and correctly answer an SAT style question.  Then, you did it all over again.  6 laps for some, 12 for others (they really HATE cheaters and bad attitudes at the Death Race.)  Here’s some pictures, they can’t even do the race justice, but they sure are fun. 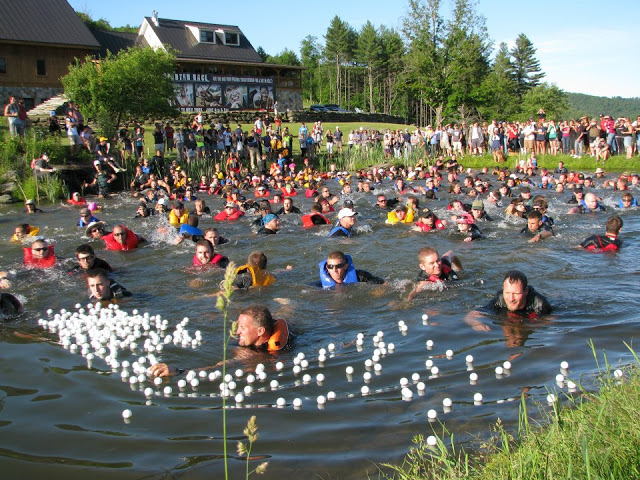 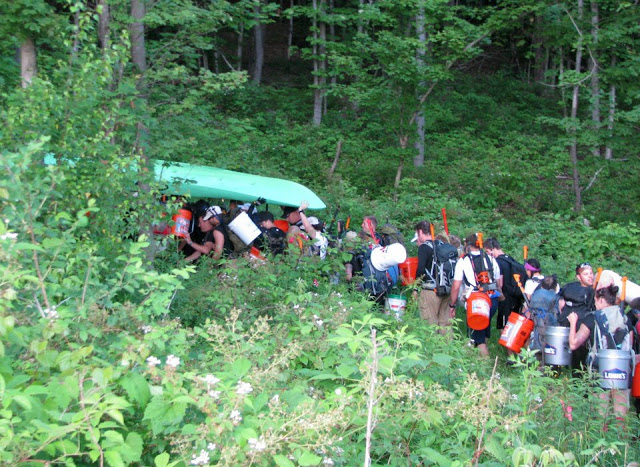 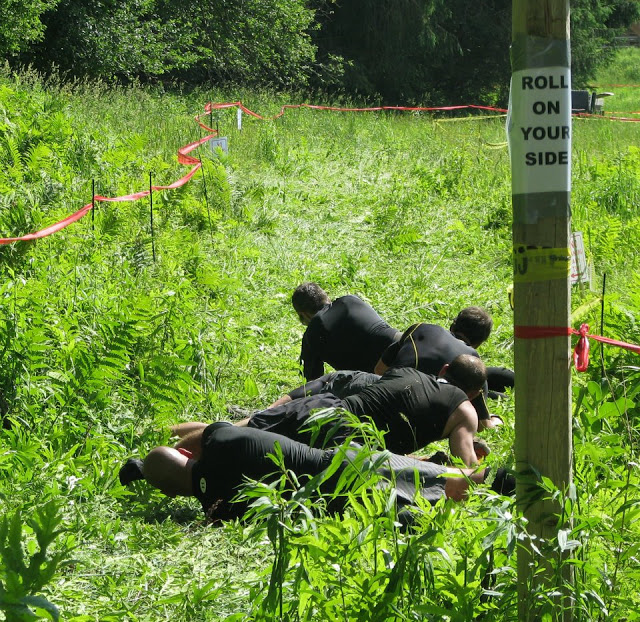 Unwritten Rule #1: in the Death Race, there are no rules. There are a bazillion instructions, most incredibly vague, given out over the course of the YEAR leading up to the death race,and no one knows what is real and what isn’t real. Gear lists, required “homework”, check in times, etc. It’s a free for all. And as I would learn by the end of the weekend, the whole point of the death race is to test YOUR willpower. No one can make you quit. No one can disqualify you. Except…for yourself. The trick is trying to remember when you are sleep/water/food deprived, cold/hot/muddy/wet/utterly exhausted.  Or, when a volunteer (i.e. me) makes you stop dead in your tracks at 1:00 in the morning, while you are carrying 75 lbs of logs, blinds you in the eyes with her (my) headlamp, and asks you “Are you a cheater?”.   It was insane.

Theme of the race: Betrayal.  Which leads back to rule #1.  Who do you believe?  Who knows what’s really going on?  Who is on your side and who isn’t?  The funny part was, I didn’t even know.   Racers would scoff at me and call me a liar at the time, but the truth was, I really did not know.  I can’t tell you how many people I told were disqualified, or DNF’s, missed a check point, would never make a check point, etc.  Some of the time I knew I was messing with them (hey, it was my job). Other times, I truly believed the words I said were true.  Because I didn’t know about Rule #1. 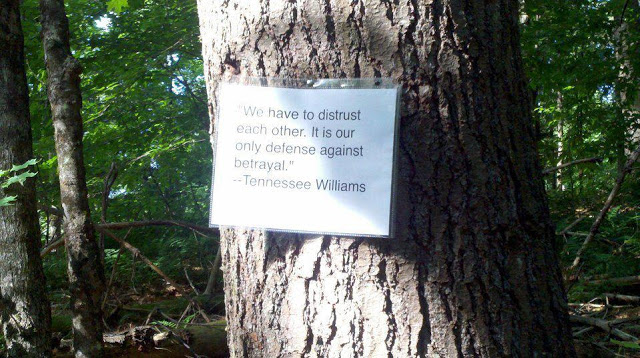 But here was the most amazing thing to me about this race was not the ridiculous obstacles and challenges, but the racers themselves.   They were not there for the glory, nor the titles, nor the kick ass skull-kettlebell-trophies (I so want one). They were there for themselves.  I can not even begin to tell you how many people I looked dead in the eye, told them they were finished, they would be listed as a “did not finish” on the final results, and they just looked me right back in the eye and said “yes ma’am.  I’m going to keep going”.  And they did.  People who were beaten, broken, dehydrated, hungry, and exhausted.  Who were just FEET away from their family and fresh gear and a car ride to a shower and a pizza join. I TOLD them they were done, that they could return to the comforts of normal civilization, and they said, politely at that (seriously, like 95% of them were the nicest people I’ve ever met) , “no thank you”. 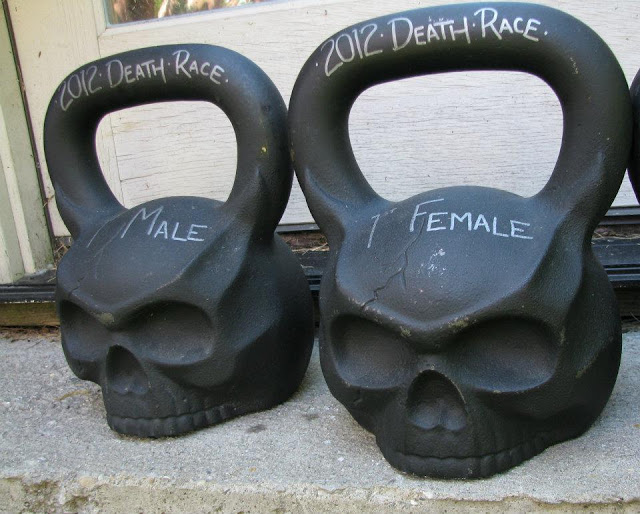 I’ll be honest, I didn’t make it to the finish line.  After 3 hours cumulitive sleep over 3 days, I went and passed out and didn’t wake up in time.  I think the first place person came in around 60+ ish hours. That’s right, 60 hours, no sleep, just racing.    Kind of makes Ironman look like playground game of kickball, right?

This post is completely unorganized and likely leaving out hundreds of details and has no real beginning or ending. There truly is no way to race recap…or even volunteer coordinator recap this story. You just had to be there.

But since even a half story needs a conclusion, here you go:

The Spartan family is amazing. Unrivaled. From the Death Racers to the Spartan Sprinters, to the support crew, the employees, the volunteers, and the crazy guys in charge, they all bring a whole new outlook to what it means to push your limits, to be strong, and to really LIVE.  And I’m honored to be a part of that family. 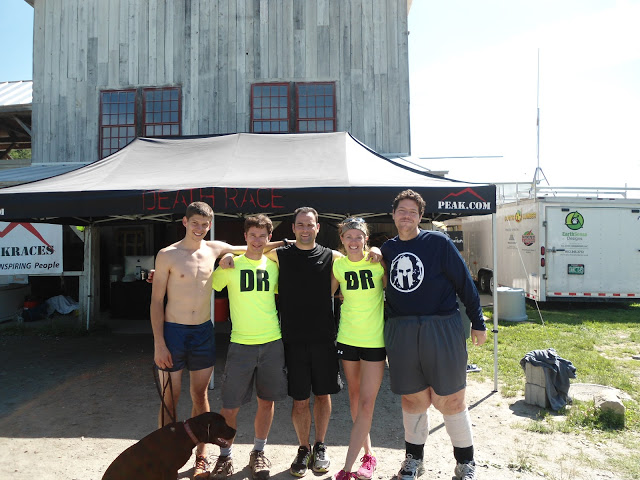