The short version: I don’t want to say I was disappointed with the Tri-State Super Spartan, because there was nothing inherently wrong with the race.  The event was well executed, the terrain difficult in its own right (what ski resort isn’t), and the obstacles were fun.   What I was disappointed in was the fact that the Tri-State Super seemed like an easier version of the Amesbury Sprint, only longer.   I can’t help but wonder if we have reached a point of diminishing returns with Spartan Race.  Same obstacles, same effort, just more climbing up mountain faces.

I truly struggled to write this recap, because I had such ambiguous feelings about it.  “Meh”, as the kids would say these days.  So instead I provided far too many pictures, that will likely cause this post to have a ridiculously slow load time.  Sorry, I still don’t understand the technical side of this blog stuff.  But anyway… 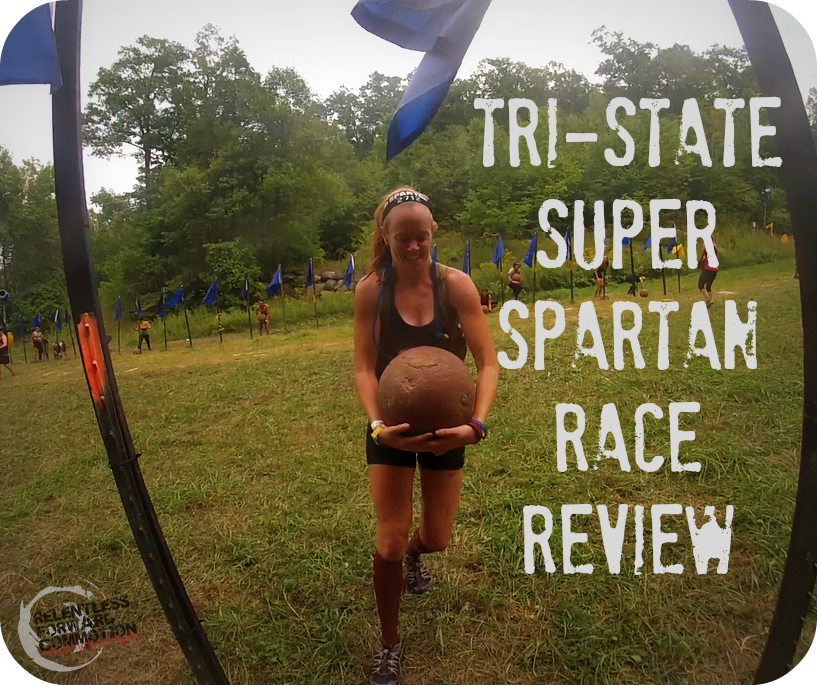 The long version: Friday afternoon Geoff and I carpooled down to the Vernon, NJ area with two of our New England Spahten friends, Paul and Erick.   Before we left I was able to stock up on some more Spahten gear to help further represent the greatest OCR team that ever was. 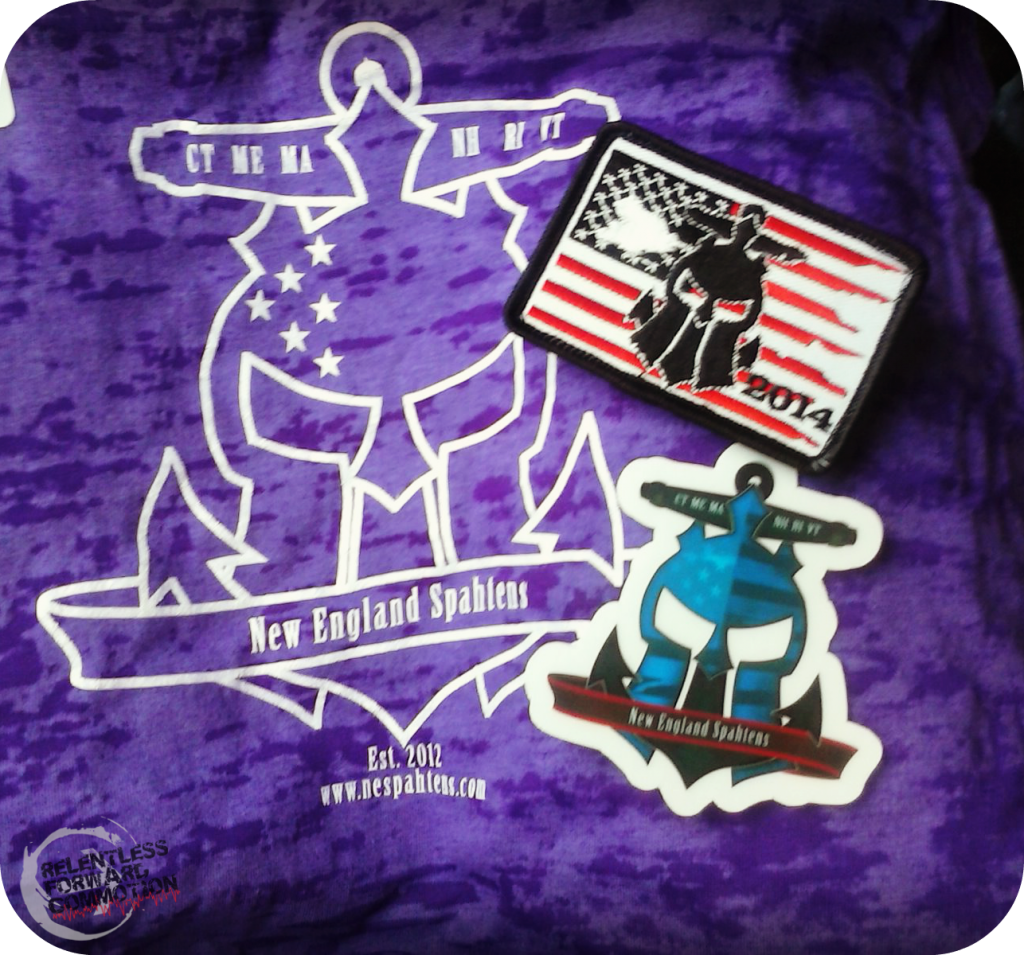 A painless drive and hotel check in was followed by partial team dinner at a local restaurant called the Mason Jar.  Geoff and I ordered a huge plate of seemingly vegetarian nachos, only to find them loaded with a mysterious sauce that totally looked like beef.  Upon questioning the waitress if there was meat in the nachos, she replied “Oh yeah.  We put chilli on them.  We should probably put that on the menu.”  Probably.  They fixed us a new plate and the nachos were really good, but I couldn’t help but laugh at the fact that I almost violated the “eat nothing new before a race” rule in a massive way.

Our team heat ended up being scheduled for noon, which gave us plenty of flexibility with our morning, and the ability to not set an alarm clock.  A noon start time always leaves the breakfast status in a questionable grey area.  Being Spahtens however, we simply went for what we know: Dunkin Donuts. 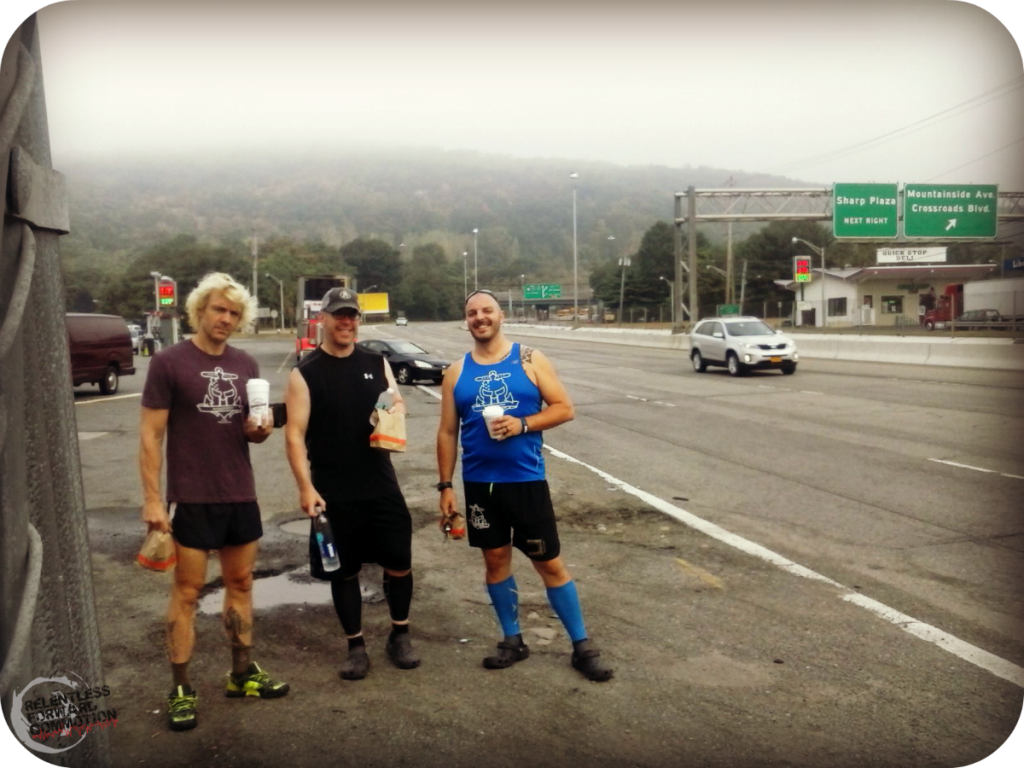 The race was held at Mountain Creek Resort, the home of the largest ski hill in New Jersey.  Note: hill, not mountain.  It wasn’t terribly intimidating (says the Vermont girl). We arrived at the off site parking lot with plenty of time to spare.  Parking was easy ($10 fee) and we only waited in line for 12 minutes for a bus to the venue (buses were constantly arriving and departing).   Registration was smooth, I waited in line for less than a minute.  Then we killed time before our heat doing what we do best: instagramming everything. 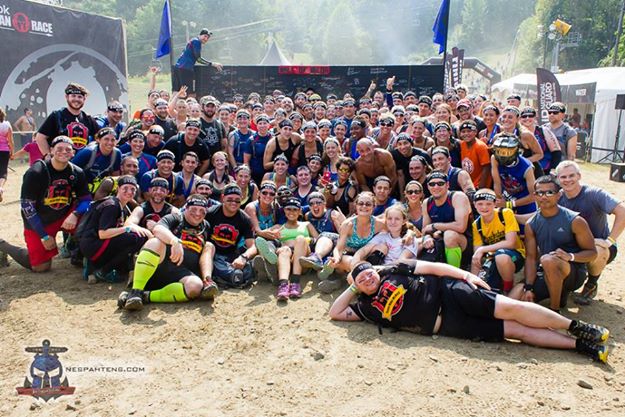 The start was uphill, of course.  Unfortunately someone (me) left a vital piece of the GoPro in the hotel room, so Geoff was unable to wear it on the head mount.  Instead I carried it in my hydration pack and pulled it out for some of the obstacles.  Thus this review has less than stellar visuals, and is completely all over the place as far as obstacle order, but I’ll make up for it with written word and sarcasm. 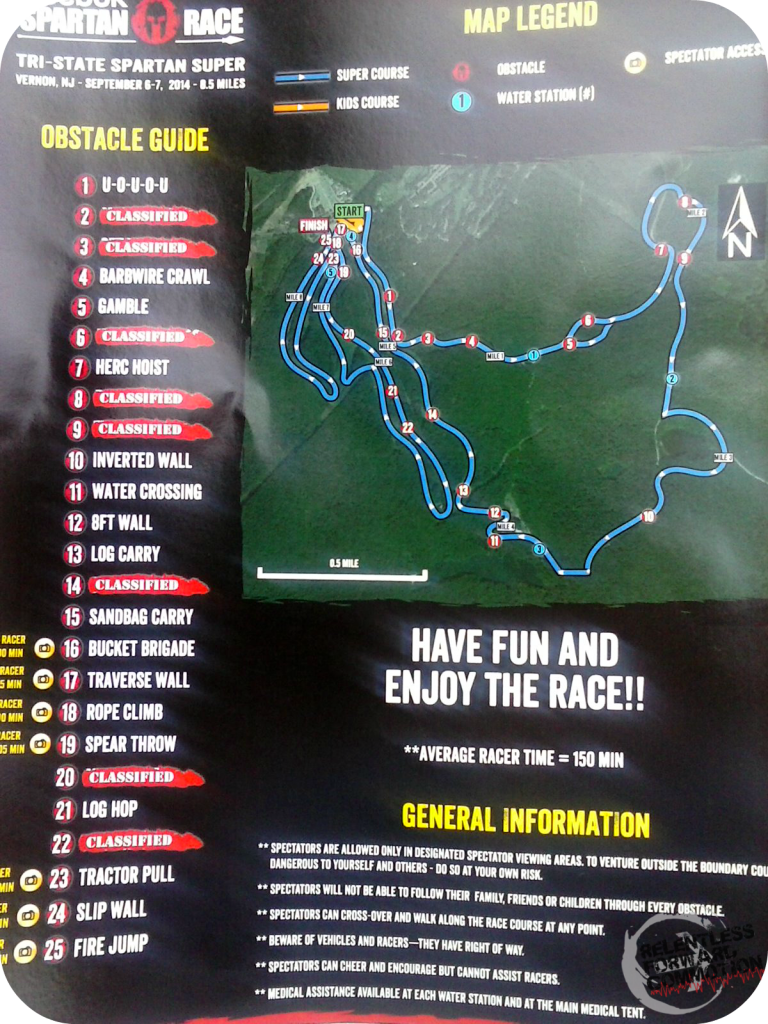 So, the first mile was actually quite eventful.   We almost immediately hit a set of walls and net crawls (over/unders), followed quickly and surprisingly by the monkey bars.  I was stoked that the monkey bars were so early in the race; my arms were fresh and ready to go, and we hadn’t even hit any mud yet to make the bars slippery.  But as it turns out, everyone on the course clearly had sweaty palms, because the bars were slick.  I fell off and so did Geoff, which totally ate away at him all day (and probably still) since he’s never failed monkey bars before.  I laughed a little at his expense as we knocked out 30 burpees each.

Further up the mountain we climbed until we encountered a barbed wire crawl.   It was a decent distance, and I appreciated the challenge.  At the very end was a submerged wall that you had to crawl under.  Unlike Amesbury where you could squat under, this one was pretty shallow and required an actual stomach “swim” to get under.  I liked it. 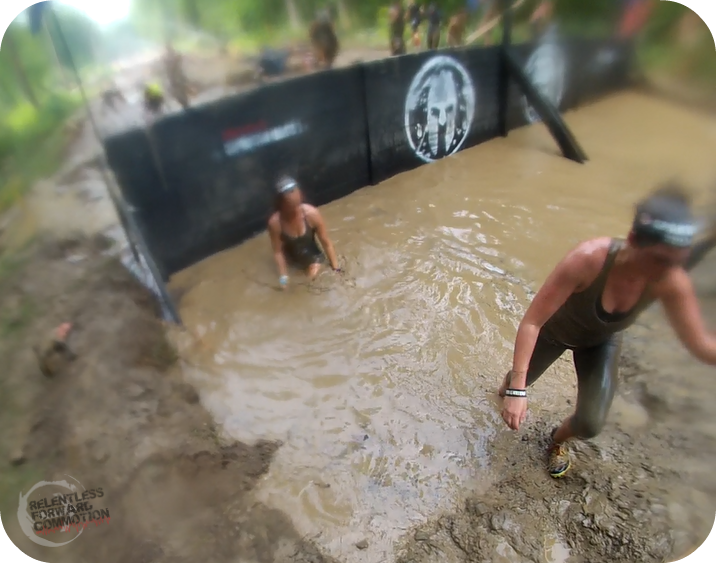 You go UNDER that wall, not over. We really struggled with decent pics for this race.

Now things get a little fuzzy, because I don’t have all of the GoPro footage to refer back to.  So let’s do some good vs. bad:

– Use of the terrain.   There was obviously a ton of uphill, but I felt it was matched well with runnable semi-flat and downhill terrain; both single track trail and wide fire roads.  I know what would have probably been ideal training for the upcoming Vermont Beast would have been A LOT more climbing.  But I truly enjoyed the opportunity to actually run, and run a lot.

-Plenty of aid stations.  This is so vastly different from the Spartan Race series we once knew, where they pretty much told you to survive out there on your own.

-The herculean hoist was painfully heavy again.  This is “good” because now I have a new goal to work towards: get that sucker off the ground all by myself. 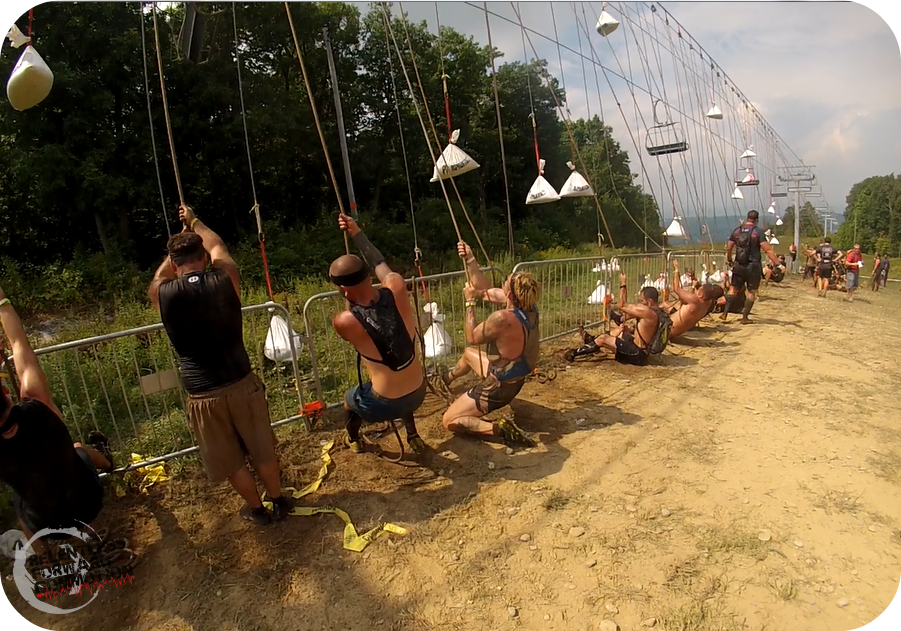 The new version of the Herculean Hoist.

-Swimming!  Did I mention how hot it was?  The swim was so welcome, I didn’t want to get out of the water.  I was quite concerned that a lot of people were struggling.  Spartan doesn’t give the “if you don’t know how to swim, DON’T GO IN THE DEEP WATER” speech like Tough Mudder.

But then there was this second water crossing.  The second we stepped into it, Geoff told me to put my hydration pack straw in my mouth and to NOT let it touch that water.  I’m not sure if it was sewage or a beaver pond, but there was certainly trash floating by and a distinct “there might be giardiasis in here “smell. 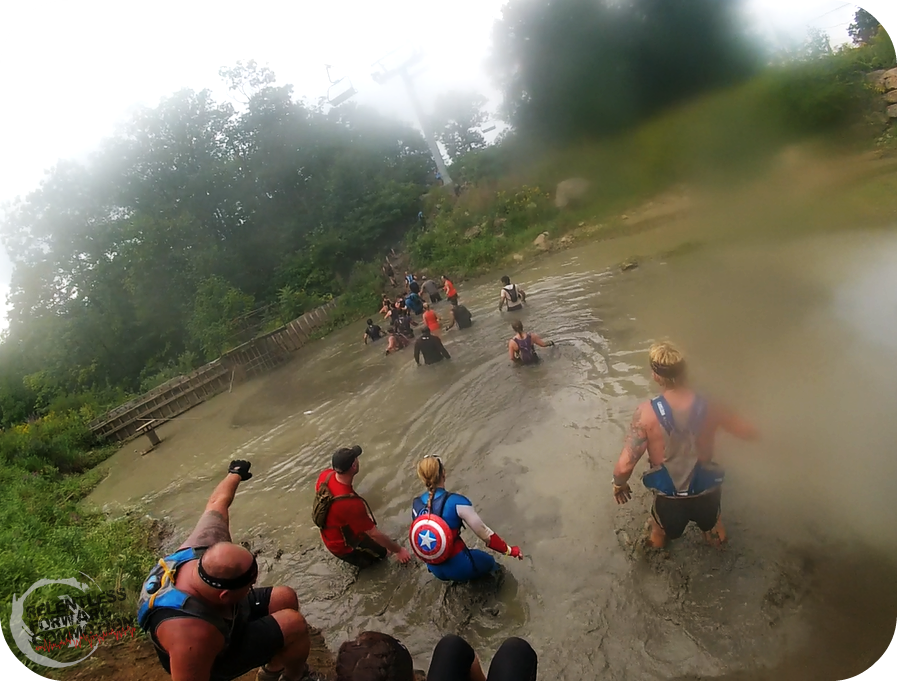 No one wants beaver fever.

– Meeting Tara Costa on course!  My favorite Biggest Loser contestant from waaaay back when I actually watched the show (or TV in general). 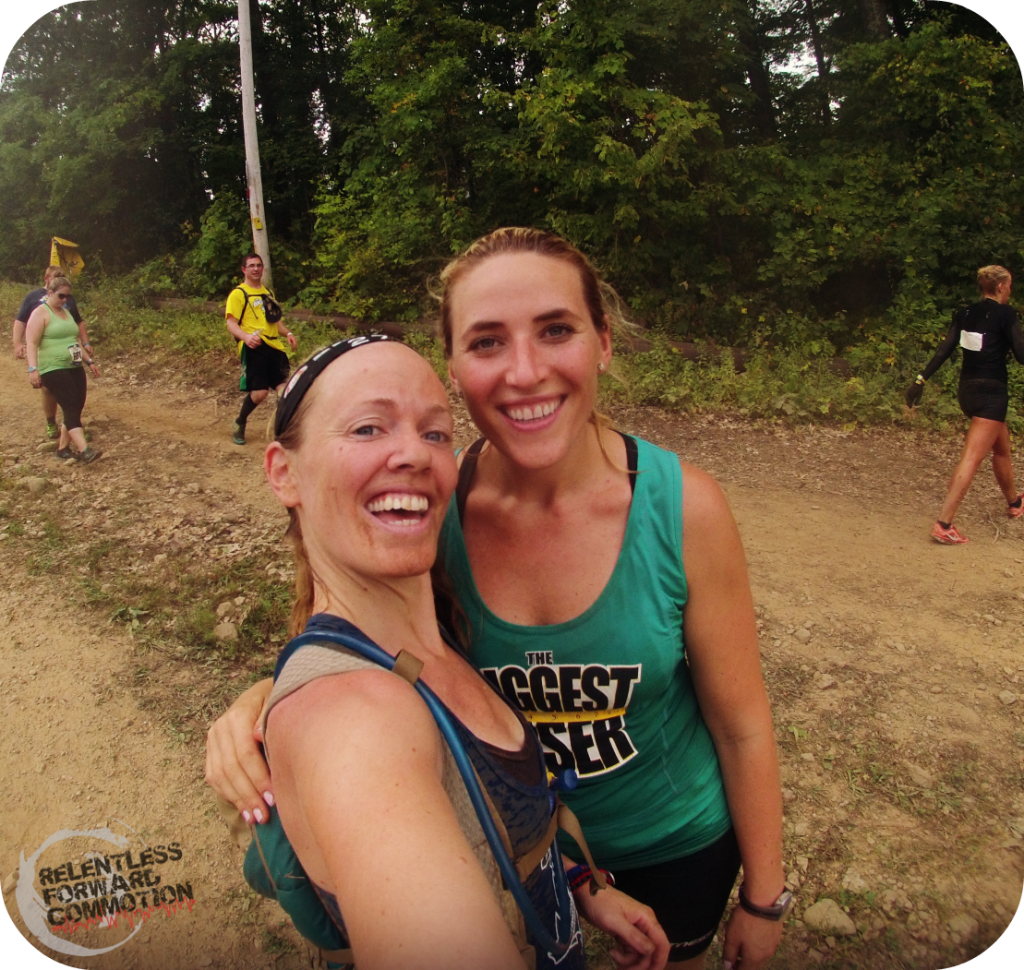 – The obstacles felt incredibly “watered down” (and not in the “it’s really hot out” good way), especially for a Super.   Every significant wall section (anything over 5 feet) was only a single wall.  In the past there would typically be two or three walls in a row counting as a single obstacle.   The bucket carry was short (I suppose this could be classified as “good”).  The tractor pull was short.  The sandbag carry was short.  The log carry was a joke it was so short.  I suppose I’ll be biting my tongue in two weeks when I get my butt handed to me at the Vermont Beast, but as far as the review for NJ goes, I was disappointed.

– The trash.  What’s up New Jersey? Never heard of the “carry in-carry out” rule?  I could not get over how much GARBAGE littered the trail.  Nutrition wrappers were EVERYWHERE.  Not Spartan races fault, but come on you guys.  It was despicable and shameful.

– The lightning.  Again, not Spartan Races fault but a bummer none the less.  When we got to the bucket brigade, we were told to take a seat.  Lightning had struck within a ten mile radius so the race was put on hold.  This I can totally appreciate and understand: safety first.  What did bum me out in the end was that race officials were telling everyone that the race clocks were stopped to take into account the delay.   But really – they didn’t stop the clocks.   I mean, how could they?  How were they to know where people were on the course at that time, and who had to stop versus who didn’t?  Some people out on the trails had no idea there was a delay at all and kept pressing forward.  Again, while I certainly don’t fault Spartan Race for the delay (quite the opposite, I appreciate their concern for our safety), I wish they didn’t have to lie to us about our times (which now have an extra 20+ minutes tacked to them.  Oh well.) 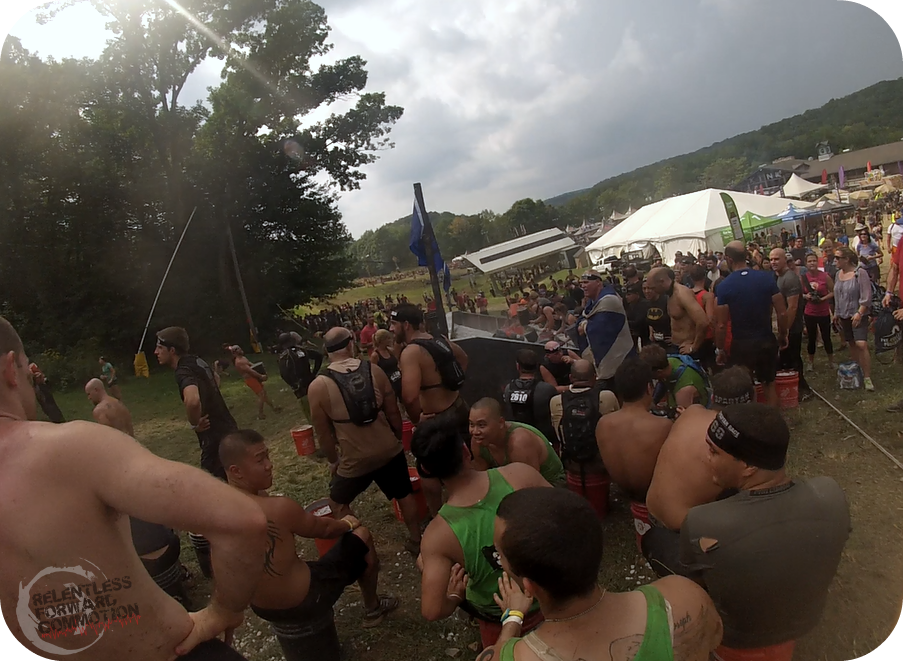 After about 20 minutes the race resumed, minus any obstacles that involved water or metal.  Thus, we had to skip the rope climb.

The traverse wall was bone dry, which made it significantly easier than normal (this is not a complaint!) 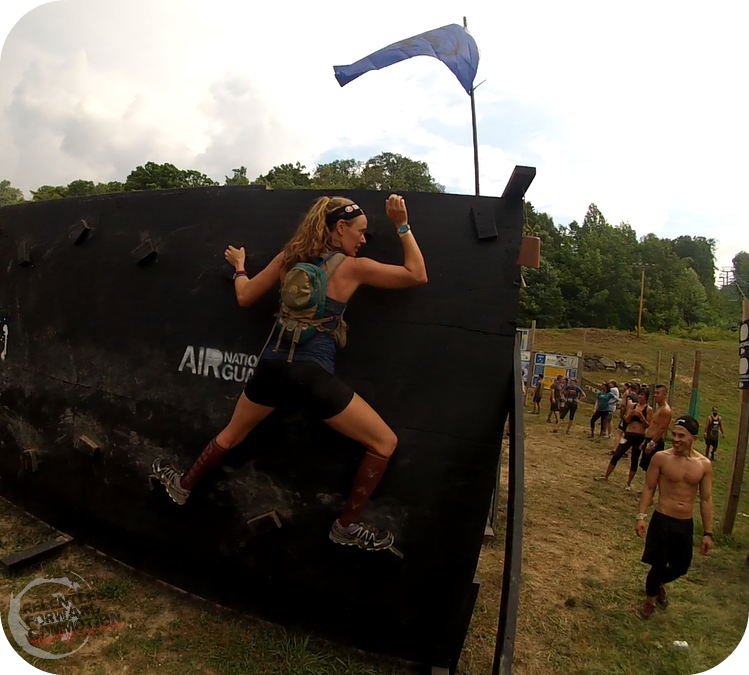 I missed the spear throw, as if that’s a surprise.   30 more burpees.  Up the mountain we went again.  Soon we came across the atlas carry: a huge rock sphere that you had to carry maybe 25 yards, burpee 5 times, then carry the ball back.    After I finished, I noticed a woman next to me from the Biggest Loser Off Road Challenge.  She bent down to pick up the atlas stone and couldn’t even budge it. I saw the disappointment in her eyes as she started to walk away, so I stopped her and told her we’d do it together.    And we did.    I don’t know when this sudden switch between my normal ridiculous competitive drive (even when it doesn’t matter) and me wanting to help everyone happened, but I’m enjoying it. 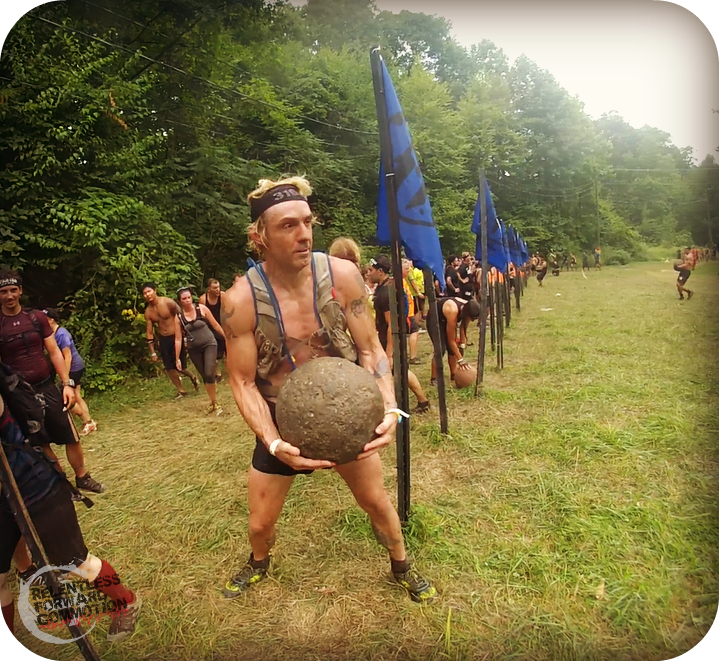 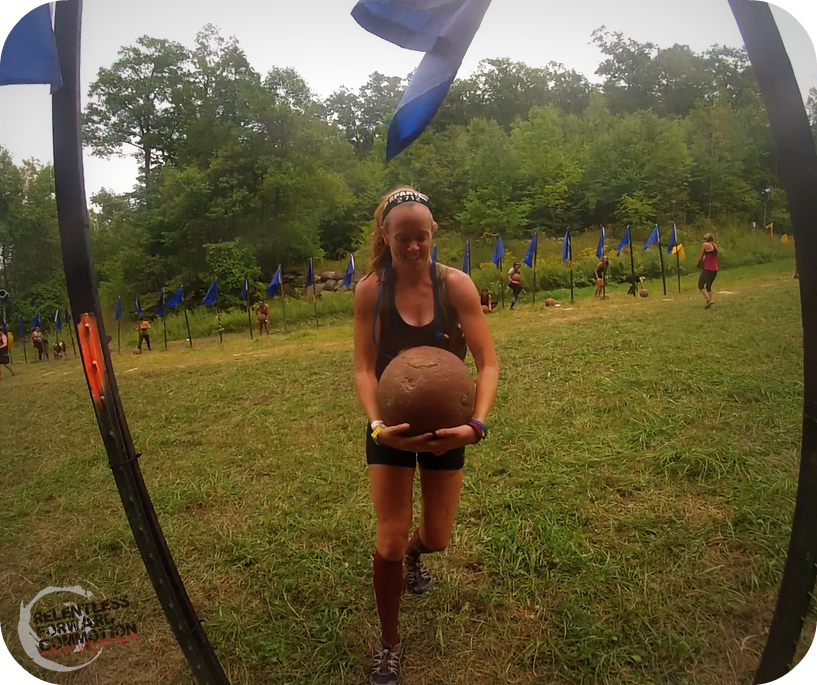 No idea how much this thing weighed. I’d guess around 50 lbs? 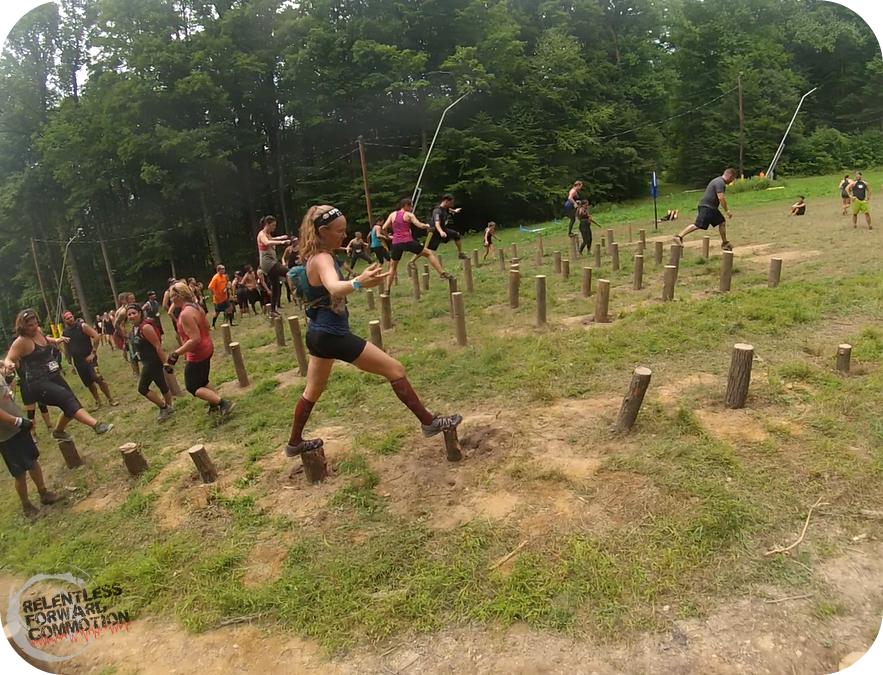 Carefully contemplating how NOT to fall off of that tiny log. 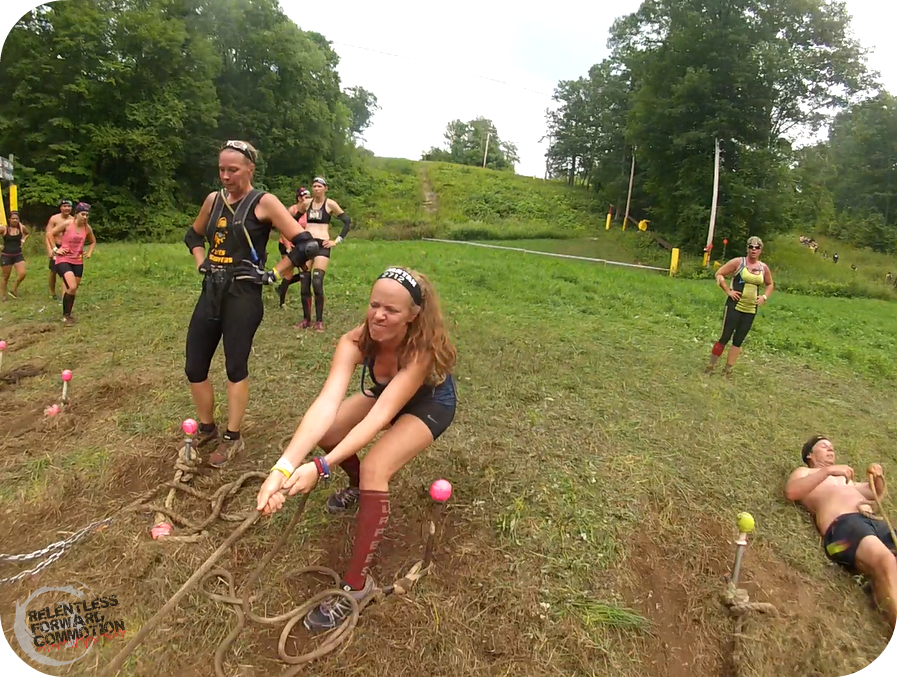 My “this is harder than it looks” face.

And they did.  Well, sort of.  After a quick tractor pull, we did a 180 degree turn and headed back up the mountain, much to almost everyone’s displeasure.  I couldn’t help but laugh.  It was a quick climb, however, and then we took another 180 and headed straight to the bottom.

A quick barbed wire roll, followed by an easy inverted, not slippery “Slippery wall” (does anyone remember when they used to put dishsoap on those suckers?), and a fire jump right at the finish line.

And of course, no gladiators. 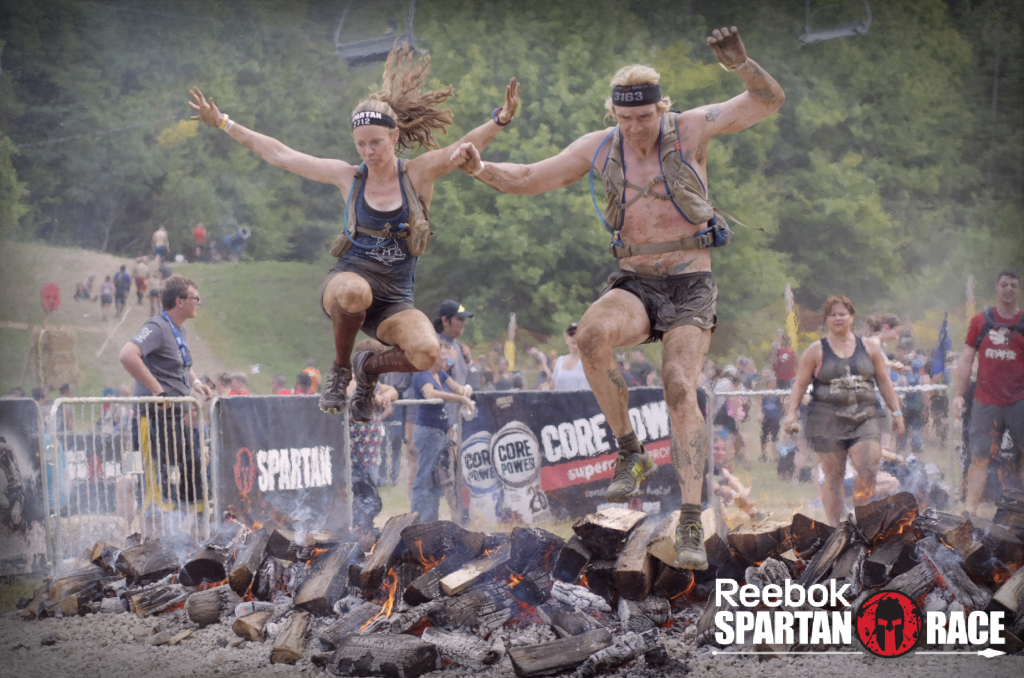 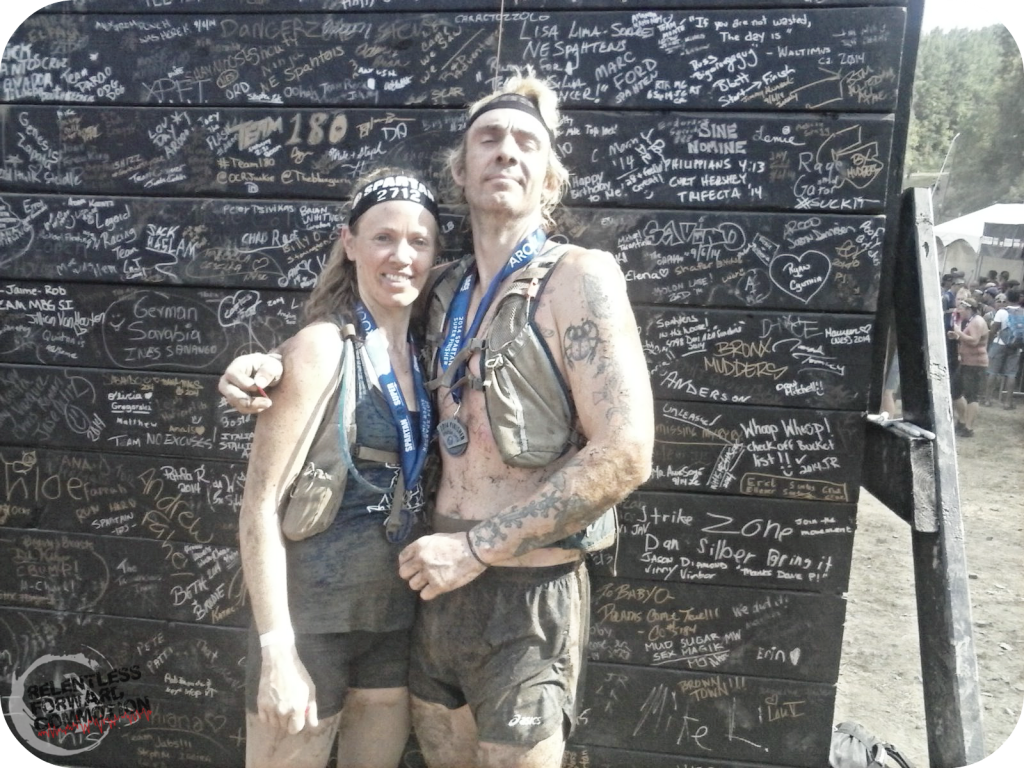 So, there you have it.  There was nothing wrong with the race, I was just left feeling…meh.  And that indeed is my own problem.  If I was a first time Spartan racer, I would have had a blast.   Being that I’ve got more than a handful under my belt, I was hoping for something more, or different.   Perhaps I need to start, you know, racing.  As in pushing myself as hard as I can …then I won’t be complaining that the log carry was too short, haha.