In short:  Spartan Race brought their “A-game” to the 2014 Boston Spartan Sprint at Amesbury Park.  4.8 miles of seamlessly executed obstacle racing, with new obstacles and twists on old ones. 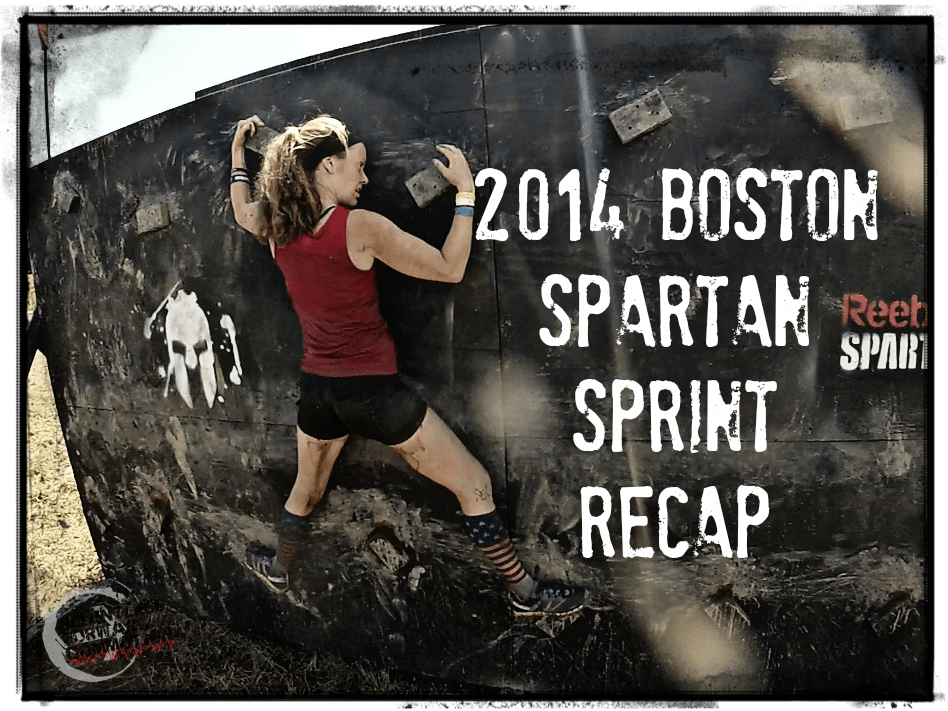 The long:   Geoff and I arrived bright and early to Amesbury Sports Park in order to deal with a bit of a registration snafu.  Leave it to me to wait until the day before the race to try and find my bib number, only to discover I wasn’t actually registered for the race.  Turns out, somehow Active.com registered Geoff twice and forgot to include me.  That would explain why I wasn’t getting race related emails.  Yay technology!  Fortunately the Spartan Race staff took care of the issue quickly, I couldn’t believe how near effortless it was.

We headed over to the “Biggest Team” tent that we had the privilege of sharing with the nearly 300  other members of the New England Spahtens that had shown up.   It was about 9:30, and the team wave was to go off at 11:30.  No sooner did I settle in and start to relax than I was immediately put to work by Matt B. Davis of Obstacle Racing Media, filming interviews of the winners of the elite heat.   Which reminds me, I need to now put “film crew” on my resume.    Interview after interview yielded the same answers: that course was hard.  Harder than any sprint that Spartan had put on thus far.    This insider information, combined with the ever increasing temperature, started making me nervous.  Really nervous.  As I had mentioned in the last post, I was woefully unprepared physically, but I was going to finish.

Arriving early certainly gave me more time to become anxious and ready to race, but it also provided us with plenty of team socializing.  I got to see a lot of old friends, and even meet new ones.  Extra big shout out to Courtney of Don’t Blink, Just Run, who introduced herself as a big fan of my blog.  She claims she “geeked out” at meeting me, but the truth is, *I’m* the one who gets nervous and tongue tied when I meet someone who actually reads my blog!  Same goes to the guy I met just after team photo (I really, reaaaaaally struggle with names, I’m sorry.) You guys all rock, thank you for reading!

Finally, it was time to line up for our wave…but not before a massive team photo and a mini Spahten love fest. 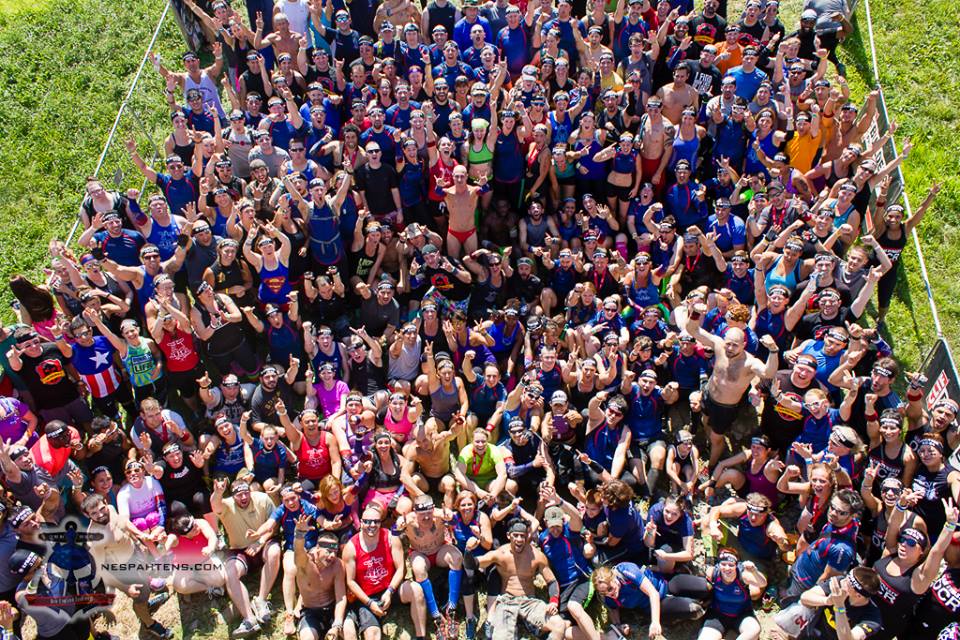 New England Spahtens, a force to be reckoned with.  Photo credit: Vince Rhee 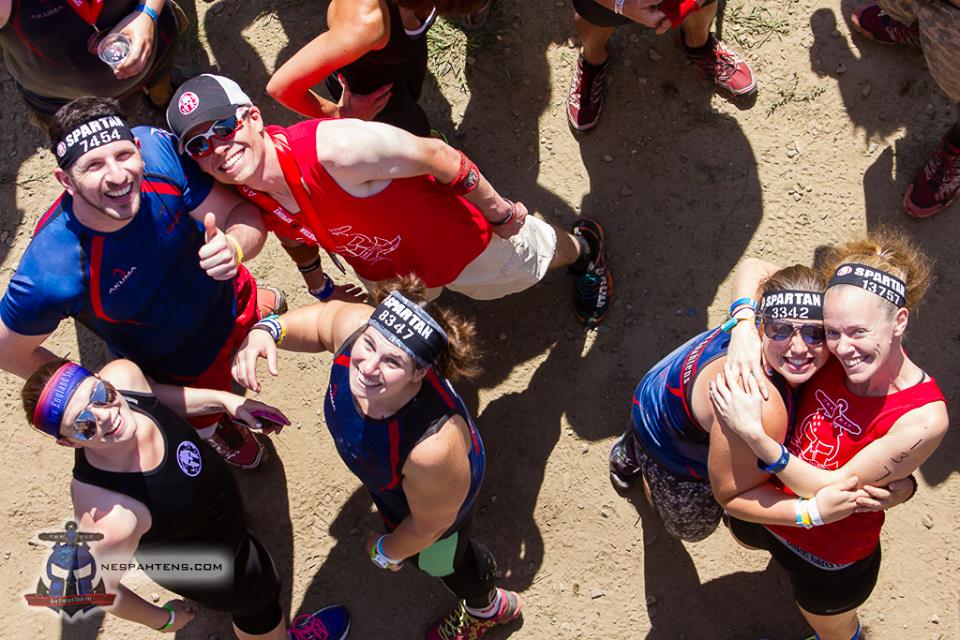 We lined up, were given pre-race instructions and the infamous Spartan speech (Who am I? I AM A SPARTAN!) and then we were off. Sadly, no Dropkick Murphys “I’m shipping up to Boston” per tradition, which would have been incredibly appropriate for our location AND our team. Oh well.   Up the hill and through the mud we went. 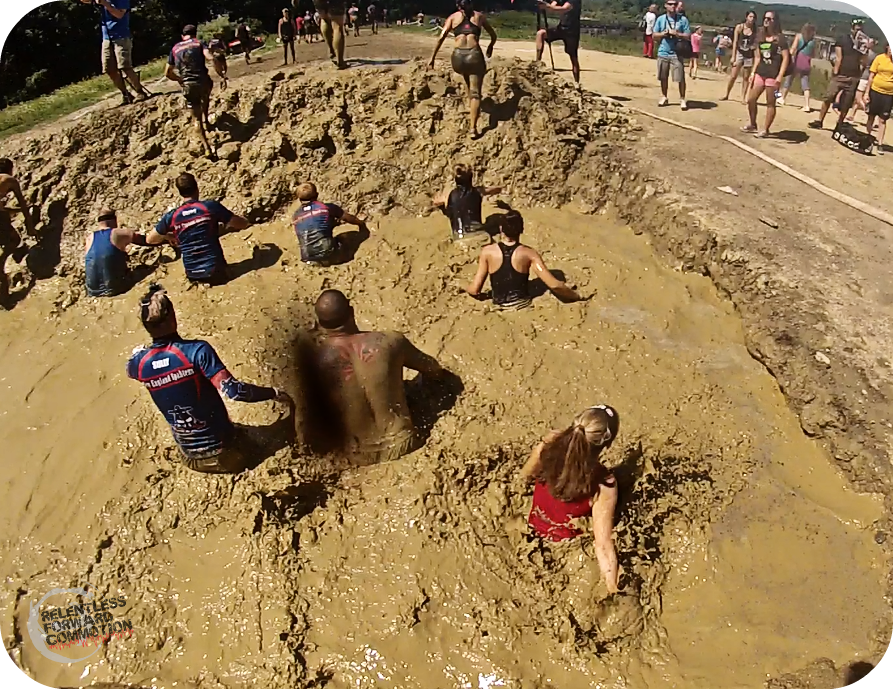 It was well into the 80’s if not pushing 90 degrees. I welcomed the muddy water.

Once we got rolling, I was right in my element, and the nerves quickly left.    I tackled each and every obstacle just as if I had been training my a$$ off, and surprisingly, did a lot better than I expected.  I paid my burpee penalties when necessary (Spartan Race instills a 30 burpee penalty per every failed obstacle…and you only get one chance on each obstacle) and ran with a smile on my face.  Because this wasn’t an “A” race, nor was I neck and neck with anyone (or even myself) for a specific finishing goal, I feel a play by play of the race isn’t necessary.  Instead, let me provide you with the highlights:

– It was hot.   Thankfully, we had a minimum of 4 water stops, which were much appreciated.

– Despite a HUGE wave, there were little to zero lines at the obstacles.  I couldn’t get over how smoothly everything was run.

– There was a twist on a lot of the obstacles:  for the walls, there were individual options (8 foot walls) and team options (12 foot walls).  At the first set of walls, Geoff deemed the two of us a team, and we managed to get me to the top of the 12 footer in one try.  Let’s hear it for my growing lats and triceps! 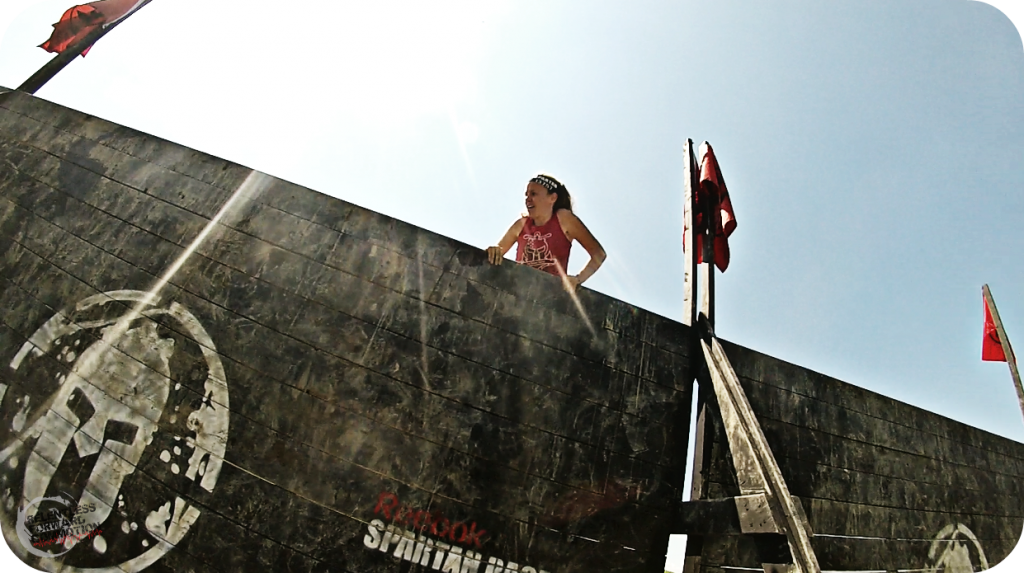 Further, the tire drag had a womens, mens, and team tire (obviously increasing in weight with each option) 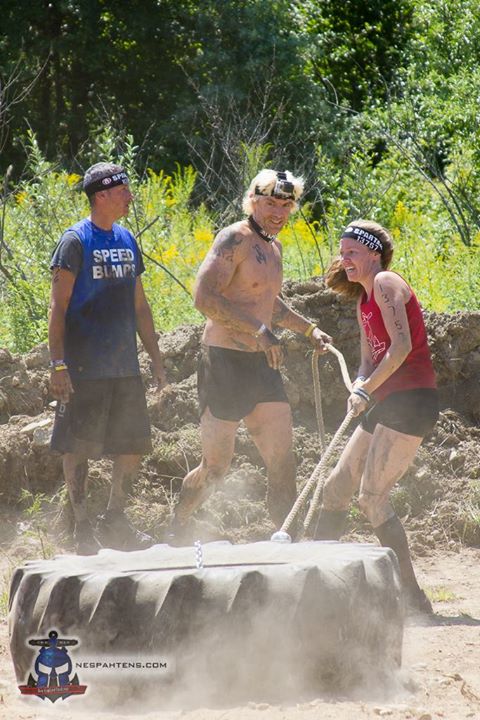 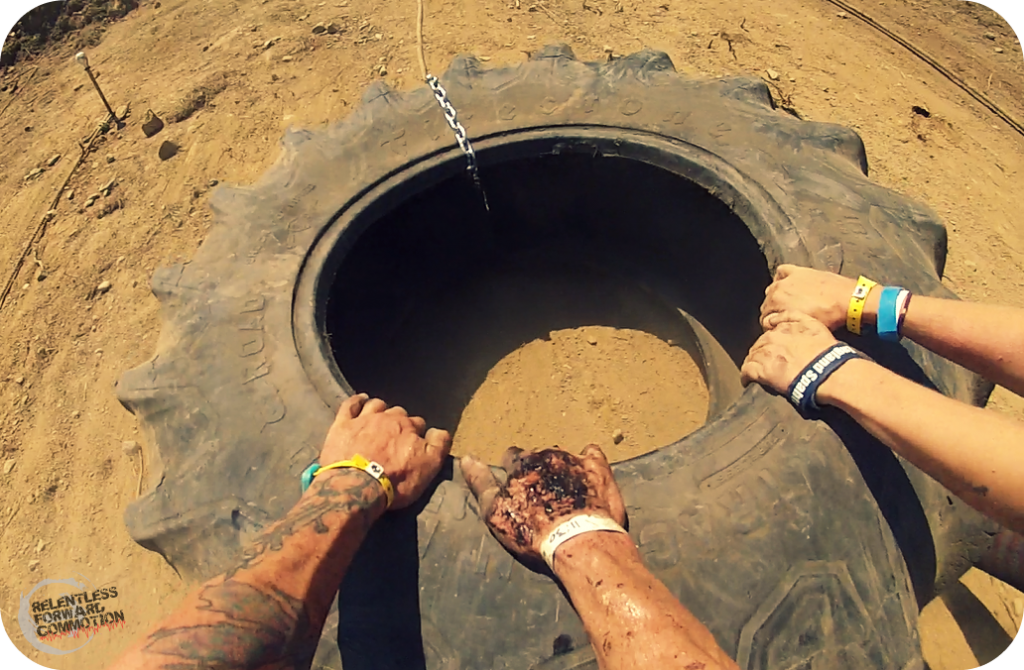 And the tractor pull had the team option of carrying logs that were chained together. 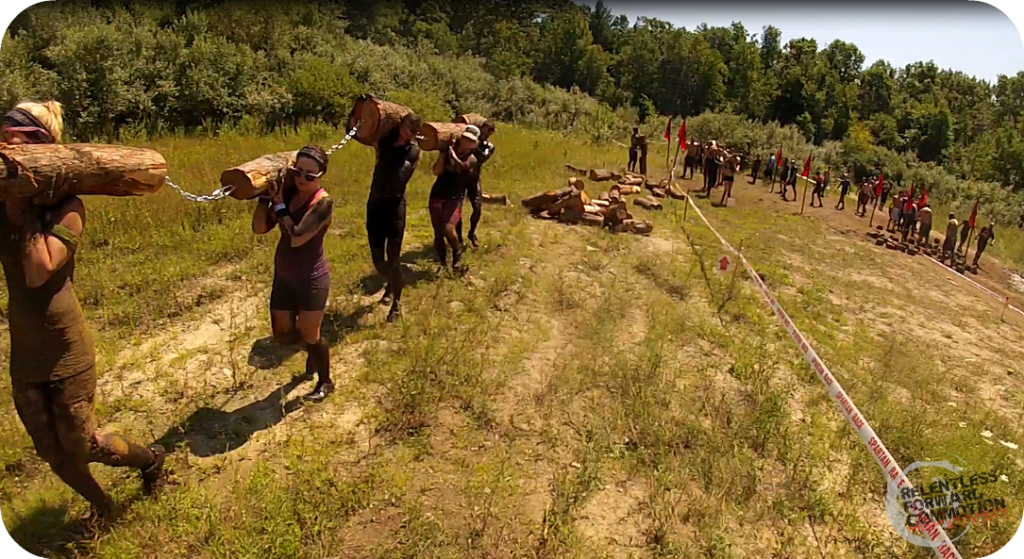 – We spent a good bit of time at the inverted walls helping others.  After I went over, Geoff stayed behind to help boost up a few Spartan ladies, while I hung out on the backside helping them down.   Fort those who are new to this obstacle AND a little nervous of heights, this one can be freaky. I held quite a few hands as the navigated the last big step to the ground, and it felt good to see their giant, appreciative smiles once they reached the ground. 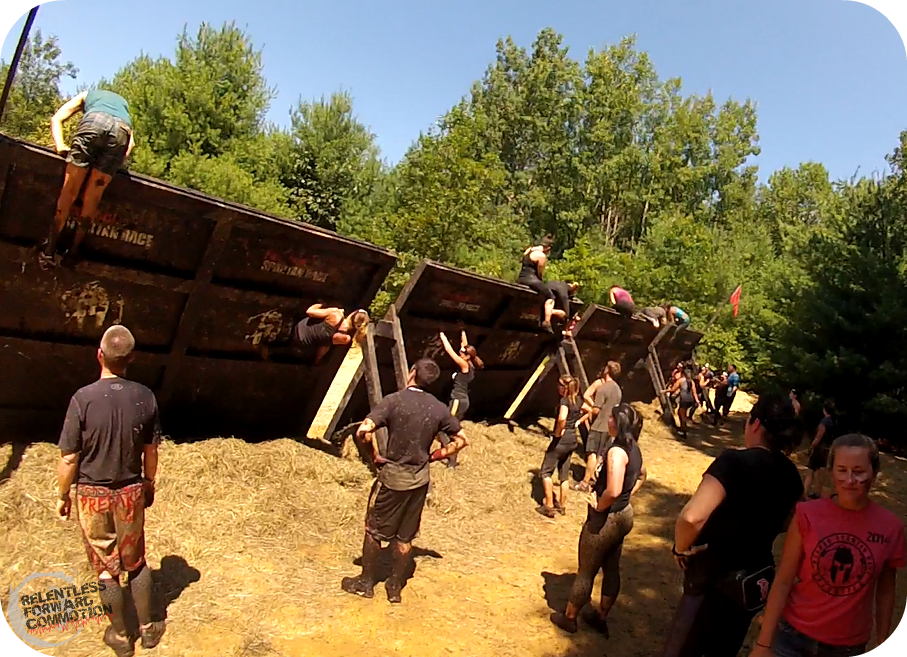 The monkey bars were of varying heights.  Having practiced my grip strength and monkey bar technique, I was feeling quite confident.  But I got stuck halfway through when I reached the one bar that was significantly higher than the others. I stopped, swung a few times for momentum and went for it…but slipped and fell.  And ALMOST landed on this guys head: 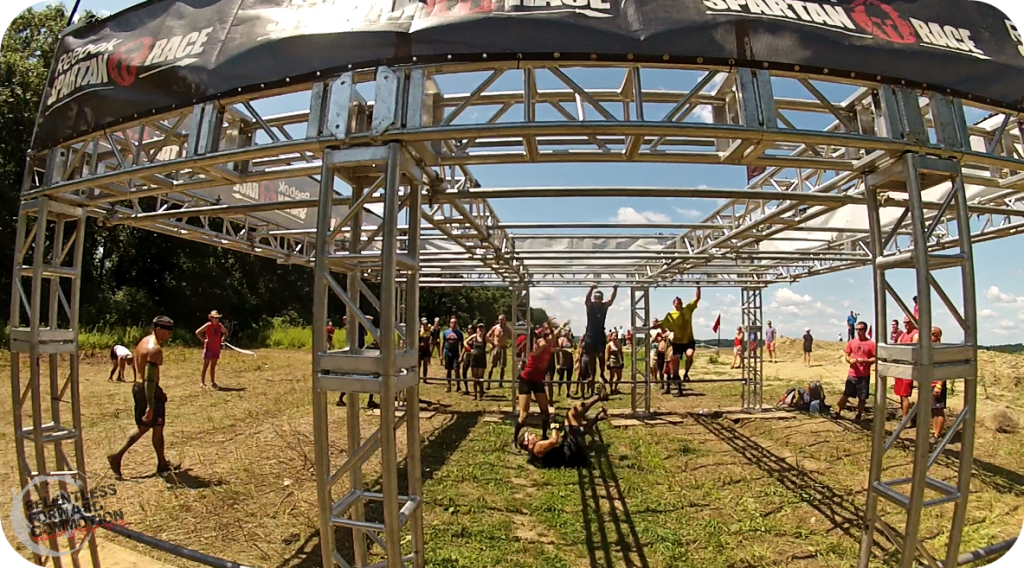 Good news: I didn’t land on him.

This rope swing…more of a mental obstacle for some than actually physically hard: 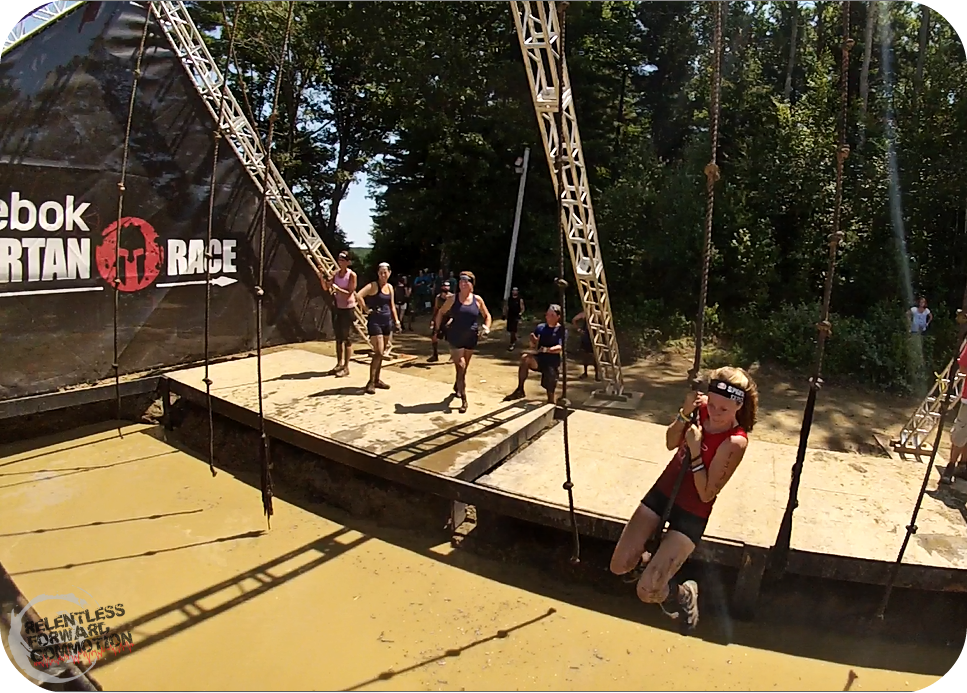 A new, improved, and much heavier herculean hoist: rumor is the men’s weighed 110 lbs, the women’s 80, but I cannot confirm nor deny that.  I just know that it was all I could do to NOT fly up in the air while hanging on.  FAR heavier than the hoists of the past. 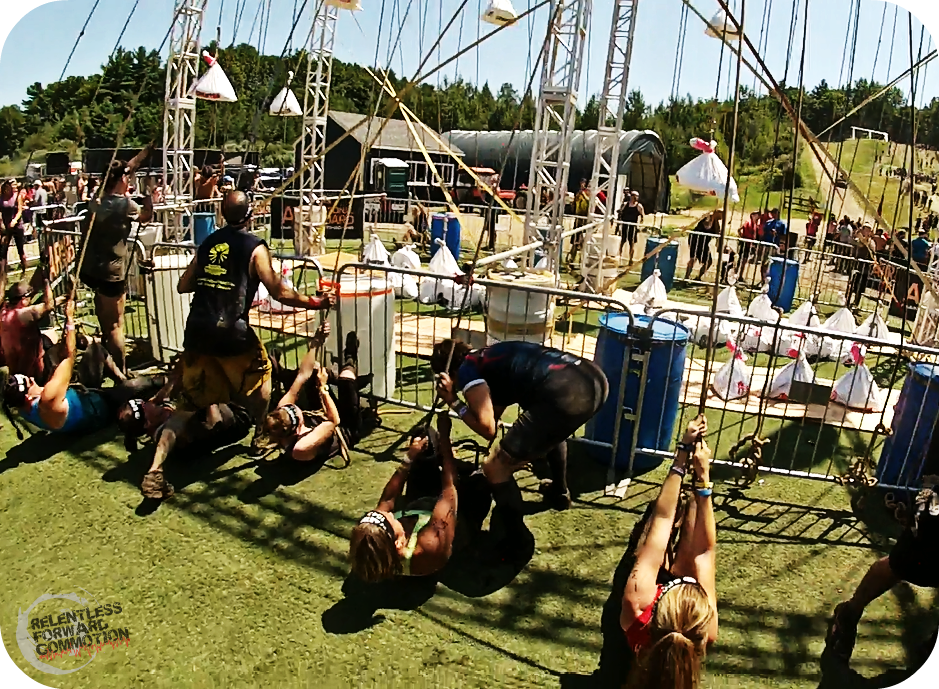 There was a lot of struggle with this one…

– The dreaded bucket carry!  I haven’t seen this one since the Killington Beast.  The hill we climbed was but a fraction of the ski trails at Killington, but the bucket was just as heavy and uncomfortable.  For those not in the know:  you must fill the bucket to the duct tape line with gravel, and then carry the bucket in front of you, not on your shoulder (which would be infinitely easier) up and then back down a long hill. 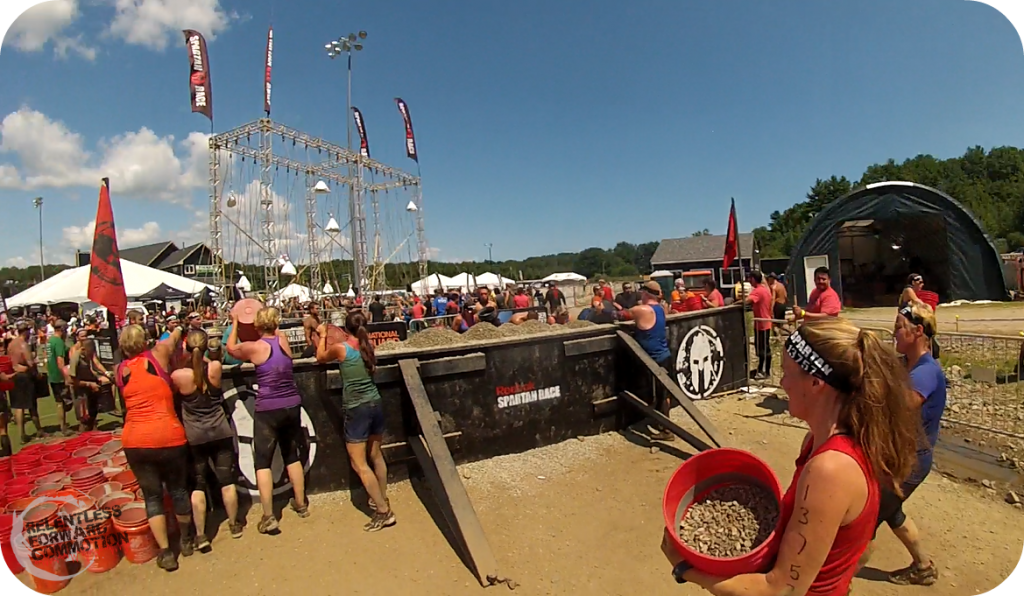 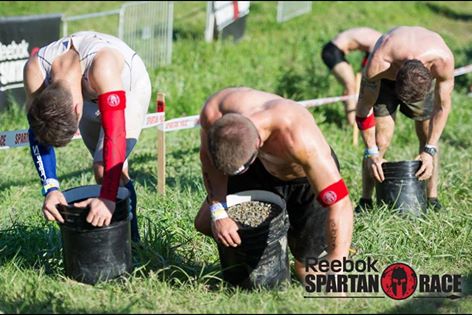 It even broke the elites…

– The rope climb was rumored to have a 95% failure rate.  I’m not sure I believe that it was THAT high, but it was probably up there.  Apparently the ropes had to be replaced last minute.  They were replaced with a rope that was thinner in diameter, made of nylon (thus slipperier when wet) and too short to have knots added to it.  Result: a ton of burpees for almost everyone involved. 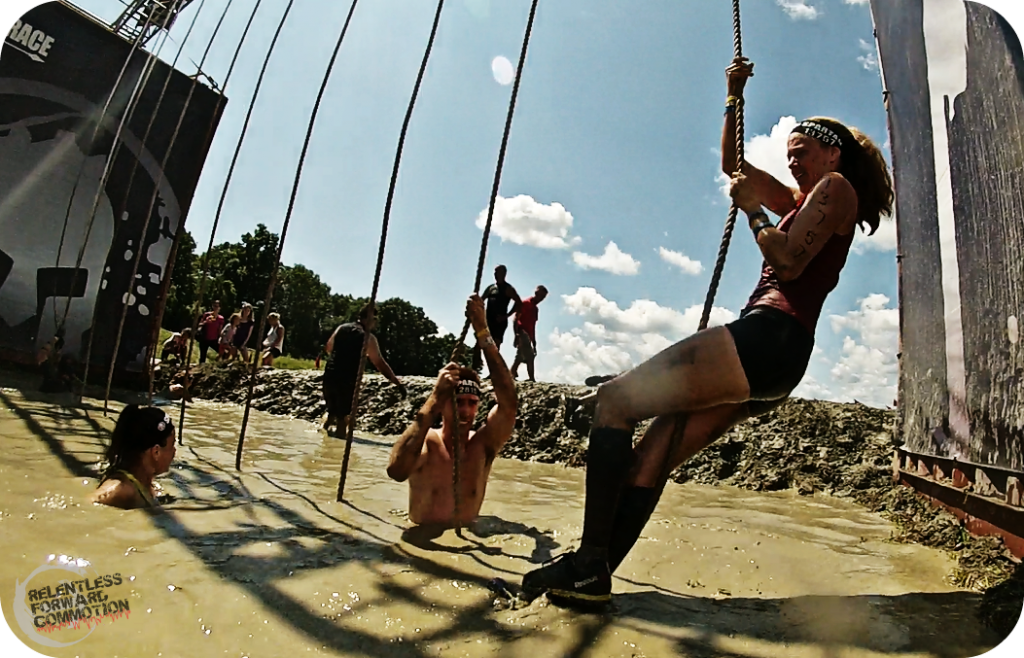 – Everyone commented on the length of the barbed wire crawl, but I didn’t find it to be any longer or monotonous than in past races. 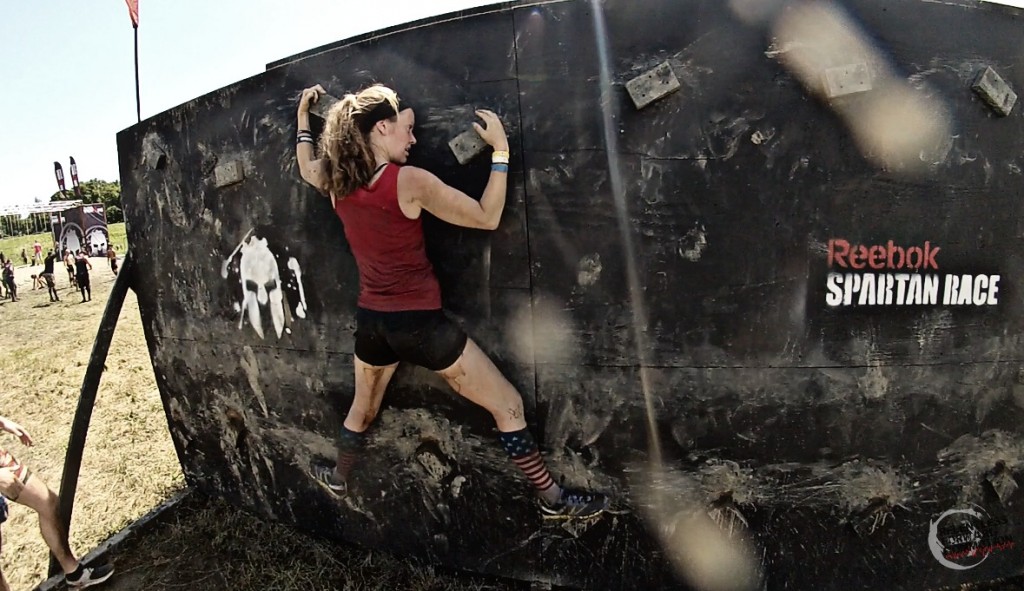 – Spear throw: missed it.  Again.  I’m holding strong with my record of missing EVERY SINGLE spear throw I’ve ever attempted. 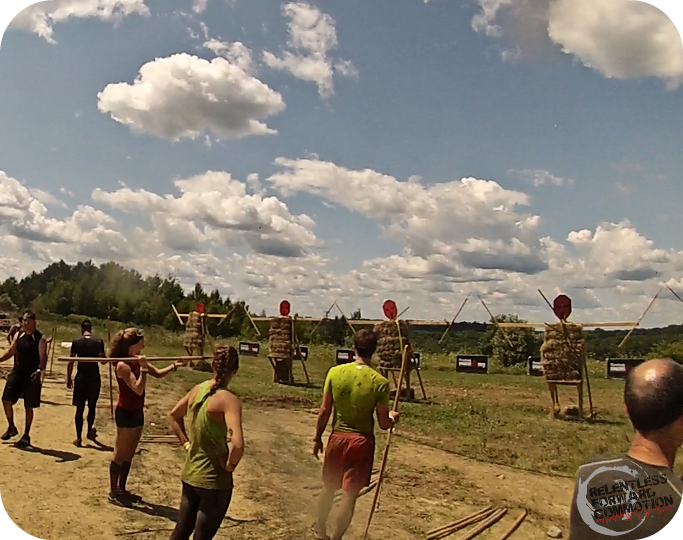 -The underwater wall was amazing.  Usually I dread these things because they are freezing cold, but in this heat, it was refreshing and fun. 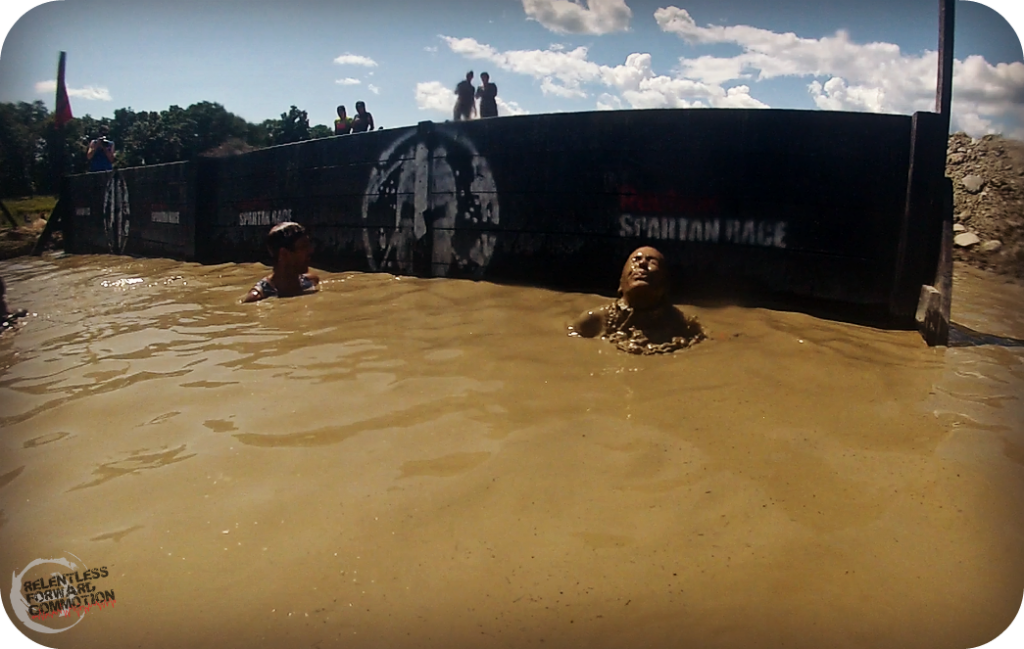 There were, of course, a number of other unmentioned and classic obstacles, such as your over/under/through walls, sandbag carries, and tower climb, just to name a few.   And of course the fire jump (I didn’t injure myself, pictures coming soon) to the finish line, where we were showered with medals, t shirts, Clif Builders Bars, bananas, water, and of course, Sam Adams beer.

As I finish this post, it is Wednesday morning, and I’m still riding the high that was race weekend.    Though the course ended up being more difficult than your standard sprint, it was still flawlessly run, from check in, to the course, to the post race festival.   It is no secret that I am a Spartan Race fan, but I’m also not afraid to tell it like it is…and this event was excellent. 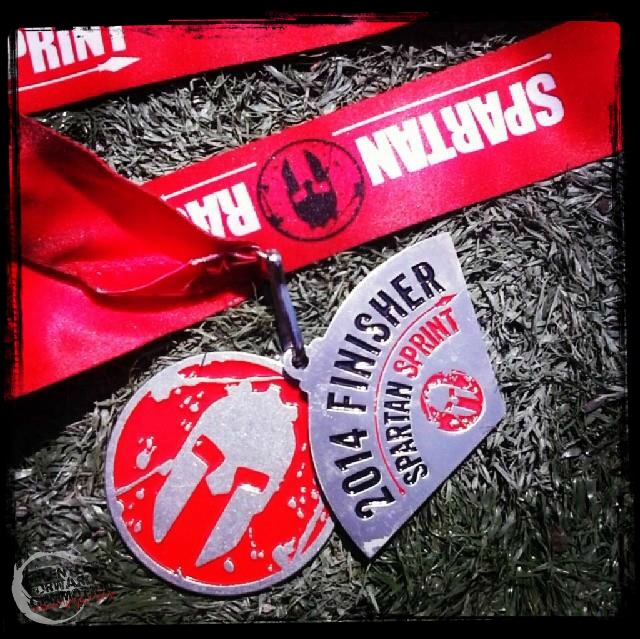