0shares
“I get called an adrenaline junkie every other minute, and I’m just fine with that.” – Steve Irwin

4 years ago this month, I was 9 months pregnant with my first son.

4 years ago this month, Steve Irwin was killed by a sting ray. Yes, the beloved crocodile hunter.

As anyone who has spent time around a pregnant woman, ready to pop “any day now” can tell you, we tend to be incredibly sensitive. But the combination of the two events turned me into a blubbering, emotional mess. I will never forget sitting home alone the night of Steve’s memorial service at the Australia Zoo. Rich was at work and I sat in my bed watching the service on TV, and cried so much I practically soaked my shirt and the down comforter I was sitting under. It was tragic that such a good person died in such an untimely, frankly incredibly unlucky accident. But even more so, as a soon to be first time mom, seeing his children, now left without a father, broke my heart into a million little pieces that day. But the tears turned into straight up pregnancy induced hormonal bawling when Bindi Irwin, then 6 years old, gave her speech at the service:

I bet you are wondering , where on earth did this come from, and what does it have to do with running? Well, in her speech Bindi says “When I see a crocodile, I will always think of him.”

And, well, whenever I have a startling encounter with wildlife during a training session, the first thing that comes to my mind is “CRIKEY!”, haha. Clearly I watch way too much T.V.

Today I went for an easy ride through my neighborhood. With all of the stop signs, intersections, speed bumps, and cul-de-sacs “easy” is pretty much the only pace you can ride here. As I took a sharp left onto another street, a giant, brown creature jumped out in front of me. Crikey! It took me a few seconds to even realize what it was. Badger? Pterodactyl? No, just a massive turkey vulture. I’ve never seen one up close, and when this thing decided to take flight, I swear it’s wing span was longer than my bike.

The encounter, and the fact that I actually say “crikey” when I run into wild creatures, brought back memories of this time four years ago. And it had me thinking about all of the other critters I had come across during my runs. So, as my tribute to the late, great Steve Irwin, I bring you: Heather’s running/cycling encounters with wildlife (thus far)

-One early morning I ran around a blind corner and almost literally stepped on top of a dead deer. It was a doe, that had clearly JUST been hit, as no one had moved her out of the middle of the road. I had never seen a wild deer this close before. I stopped and stared at her. It sounds silly, but she was beautiful. I could tell by looking at her that she was nursing babies. It was spring after all, and that broke my heart. Though I didn’t hit her and take her life, I still felt guilty that she had to die by humans in this way.

-I’ve seen a lot of snakes. Usually just harmless black or garter snakes. One time I almost stepped on what I thought was a rattle snake. Of course that one made me jump 3 feet backwards. As soon as I realized the snake wasn’t moving, and was dead, I took a closer look. “Oh, no rattle, with that pattern it must be a python! Must have been a pet!” I thought too myself. For what it’s worth, I know NOTHING of snakes. When I got home I googled images of the snake. Turns out that lost pet python was a very poisonous copperhead. Uh, oops. Good thing I didn’t make that mistake while it was still alive.

-One morning I took a beach run. The tide was on it’s way out on a morning after a full moon. It looked like the aquarium washed ashore. In all my years of frolicking on beaches up and down the east coast, I had never seen anything like it. Fish, crabs, horse shoe crabs, urchins, sea cucumbers, coral, sand dollars, shellfish galore. It was crazy. I was glad I wore shoes for that run.

I’ve also been lucky enough to see dolphins and even the occasional shark on beach runs (just sand sharks, nothing crazy, but they like to come in and feed on bait fish early in the mornings). I’ve seen beautiful cranes and herons, and creepy millipedes and spiders. And let’s not forget all of the bunnies, squirrels, mice, cats, vicious chihuahuas, frogs, toads, birds and other various wildlife that grace my presence on those early morning runs, when the rest of the world is asleep. It’s almost enough to make you feel like Snow White. Or Steve Irwin.

Running gives us such an amazing opportunity to breathe in the beauty of nature. So many awesome things that we might have missed if we were in a car, in a rush, or with our ear glued to our cell phones.

Feel free to comment and share your running (cycling)/wildlife/nature encounters with us, I’d love to hear them! 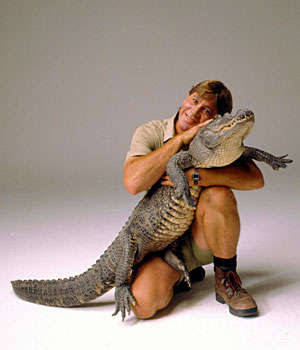