First off, you people are INCREDIBLE. I never imagined that in the first 36 hours after I posted the awesome running gear raffle to benefit the UCF I would raise $740!!! I am just blown away by the generosity. If I could reach through the computer screen and hug each and every one of you personally, I would! THANK YOU THANK YOU THANK YOU!! For those of you who haven’t had a chance to check it out yet, follow this link to the raffle. Thanks for your continued support!!

Last night I read a hysterical post by Punk Rock Tri Guy about race addictions and how we are all a bunch of big babies wearing bibs and attracted to shiny things. I laughed, and nodded at the parts I could relate to (who am I kidding, I related to all of it).

And now, I find myself being the perfect “exhibit A” for Ron’s post, because I currently find myself throwing a mini “I wanna race” temper tantrum.

Earlier this afternoon, I was attempting to earn my keep as an assistant organizer in the local meetup-mommy group (I swear I’m surprised they haven’t demoted me by now) by posting some local races to the calendar. After doing so, one of the other members mentioned a half marathon, next week, in a town about an hour away. Whaaat? I didn’t know about this one!
OF COURSE, now I want to run this race. In my tempertantrum state I’d almost say I NEED to run this race, but I know that is silly. I just really really really want to go! And I promise I won’t race, I’ll save the PR attempt for Myrtle Beach in February as planned. No, instead it could be just a leisurely training run…but instead of dodging cars and weird looks from neighbors I will have insta-cheerleaders, dixie cups of water handed to me, and a shiny medal at the finish line. Last 13 miler I did here at home I was handed a baby with a full diaper at the finish line. At least he was cute! 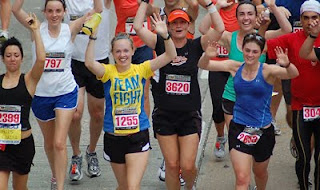 Why am I so addicted to racing? Is it the atmosphere? The energy? Or is it because I am instantly surrounded by hundreds, sometimes thousands, of others just like me? Those who don’t give me the funny raised eyebrow when I respond to their question of “what did you do this morning” with “made the kids breakfast, ran 15 miles, folded some laundry…”
Maybe it’s just having people around me, period. I used to complain about running solo. I have a crazy schedule and take my running time whenever I can, usually at a few minutes notice. The only running partners who I can ever seem to keep a running date with are my own kids in the jog stroller. But over time, I’ve grown to appreciate the quiet time. Let’s be real, what mother of two toddlers doesn’t appreciate alone time! I’m able to push myself when I want to, and not feel as though I have to apologize for holding someone else back on those off days. Still…it gets pretty lonely out there, especially when approaching the 2 hour + mark. People watching is fun. Passing the same houses in the same neighborhood again and again tends to be a bit mind numbing. Races are a nice change of pace (no pun intended!)
And did I mention I love the medals? Silly, I know, that I take such pride in material objects. I hear of so many other runners who toss their medals in storage or give them to their kids. Me? I put mine on display like each one is an Olympic gold medal. Contrary to popular belief (well, I’ve heard it once or twice at least), running doesn’t come easily to me. Heck, I don’t think a marathon comes easily to anyone, short of the 50-100 mile ultra runners. So my medals hang on the wall, as a reminder of my accomplishments, from the good races, to the miserable ones I stuck with and didn’t quit. And they remind me of just how far I’ve come in the last couple of years, from the days I only hopped on a treadmill for a mile once every few months in a lousy attempt to burn some of that beer gut away.
Oh, and I think they are pretty 🙂
Alas, as awesome blog pal Tall Mom Mel says, I am a mom first, runner second, and so there are other priorities. Family plans for the day come first. Bills must be paid, and food in the fridge (I can’t even begin to tell you how much these kids eat!) before I consider dropping money on some dixie cups of water and a shiny half marathon medal. I can afterall, get the same distance here at home, for free. DARN YOU RACES for being SO EXPENSIVE! A $20 entry fee here and there I can justify, but $65 on a whim for an unplanned race? Not so much. If it all comes together, however…don’t think I won’t toe that start line! Looks like it’s time to shmooze the customers on my bartending shift this Monday, HAHA!
I LOVE RACING!