The early morning lift session at the gym is always painfully entertaining.  Now that winter has taken its icy grasp upon the state of Vermont (I don’t care if it’s technically fall, it’s 25 degrees outside right now), getting out of bed has become an epic battle between motivation and comfortable, warm, blankets.   But on an average of 5 times out of 7 attempts, we get out of bed, put on our gym clothes (and then three layers of warm clothes over those), and dutifully begin that days strength training routine.  At some point during the first few exercises, I quickly bridge the gap between lethargic and exceedingly awake, thank you to a wonderful product known as pre-workout.   It is during that metamorphosis from sloth to something that resembles an excited jack russell terrier, that I begin rambling (kind of like I am now).This morning was no exception.  As the caffeine kicked in, the words just started flowing.

“Did you know Jim Carey was originally cast for the role in Elf?”

“Isn’t it weird when you wear black pants and a black shirt, but once you are in public you realize they are two totally different shades of black?”

“If you could only have only one piece of equipment to workout on, what would it be?”

I have no idea where these questions, statements, and trivial facts come from. Clearly I spend far too much time trapped in my “office” (that’s what I refer to this studio apartment as during working hours) with cats, and I’m suffering severely from lack of human interaction.

But then out of nowhere came this one:

“What is a greater investment in your health: a monthly gym membership, or health insurance?”

Geoff answered “gym membership” and I immediately agreed, which is no surprise: we are two gym rats who work in the fitness field.   But my own question really got the wheels turning in my mind.   What truly is a greater investment in your health?  With all of the talk of the Affordable Health Care Act lately, it certainly is a question to ponder.

Now, I haven’t had health insurance for myself for about five years now.  Mostly due to circumstance, as my last few jobs simply haven’t offered health insurance.  The brief stint I did in retail last winter did offer me a policy, but at a cost of more than half of my monthly paycheck.    Needless to say I am one of the millions of people who are now going to have to decide if I’m going to pick an “affordable” (hilarious) insurance plan offered by the government or pay a fine for lack of insurance.   But that isn’t necessarily what this blog post is about. The choice to not have insurance has indeed been mine.   And as of now, for me, the cost of being uninsured (i.e. paying for medical care out of  my own pocket) hasn’t even come close to meeting the cost of paying for health insurance.    While health insurance never has appeared to be “affordable” in any way, shape, or form for me, I’m sure there are things others would consider luxuries that I could theoretically sacrifice in order to scrape together the money for health insurance.

One of those “luxuries” being the cost of fitness.

In the past I’ve blogged in the past about how fitness absolutely can be free.  No one charges you to do pushups and sit-ups in the comfort of your home, or to run down the trails or the streets.   But there certainly can be a cost associated with a fit lifestyle.  Clothes, shoes, race registrations,  a gym membership, etc.   But in my mind, my money is better spent proactively ensuring that I am healthy through my physical activity, rather than spending money hoping that if I become sick (or the inevitable, when I become sick if I am not taking care of myself physically), I’ll have to pay less out of pocket.  Of course, in a perfect world, I’d have both, but if I had to choose health insurance over ensuring health…which do I choose?

The benefits of physical activity on overall health and prevention of morbidity are absolutely undeniable.  Let’s check out these facts from the CDC:

HEALTH BURDENS THAT COULD BE REDUCED THROUGH PHYSICAL ACTIVITY

Millions of Americans suffer from illnesses that can be prevented or improved through regular physical activity.

Physical inactivity is estimated to cost the United States about $75 billion in medical costs each year (source).

About 48 million Americans are uninsured, resulting in about $49 billion in medical costs each year (source).

So which is a greater cost to our society?

Of course, this post is just me thinking out loud.  I dabble in politics and economics the same way I dabble in knitting (which is the equivalent of approximately 48 hours per calendar year) so I’m certain there are numerous details that I am leaving out and overlooking.  Of course this doesn’t take into account the people who are the picture of health and well being, who still develop cancer and end up with hundreds of thousands of dollars in medical bills (Coincidentally, I’m still paying off the bills from the hand I broke in the gym last winter. )  And I will be the first to admit that not having health insurance is similar to a game of Russian roulette: if I get into some sort of freak accident later today I’m pretty much out of luck.   But it just seems to me that we could greatly decrease the overall cost of health care if we could somehow increase the overall physical activity among our society, therefore decreasing the need for massive amounts of health care in the first place.

And then everyone would win. 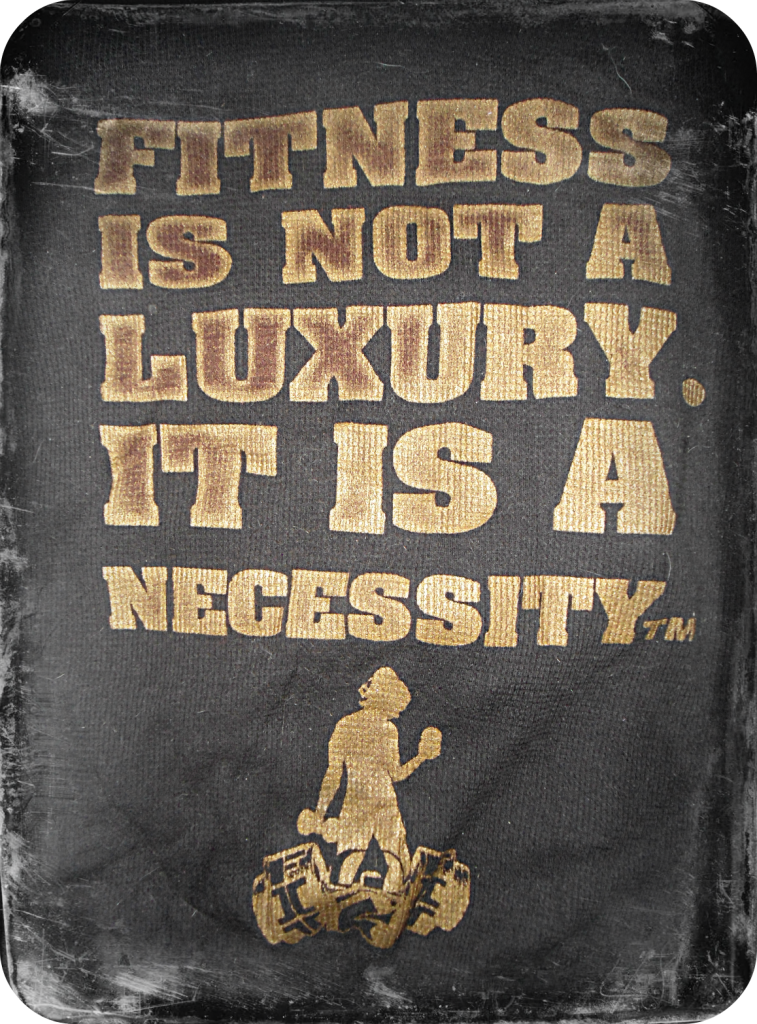 A shirt I do not wear often enough…