A few weeks ago I made my first, and only, purchase thus far at my new place of employment.   Which in itself, is a feat, for I spend all day surrounded by stellar outdoor gear.  Fortunately, this time of year, most of the aforementioned gear is winter coats and hunting gadgets and stuff I don’t need nor want.  But anyway, back to my purchase.

I bought a winter hat.  But not just any winter hat: a handmade-in- Nepal wool hat.  I like to imagine this hat was stitched by a weathered, yet happy, Grandma type, with wool from a Yak that has helped Sherpa adventurers on their way to summit Everest.   And the hat contains the bad-ass-ness of that mountain peak and all whom have tackled it, complete with the eerie music, like this:

Geoff says the hat makes me look very “Brattleboro”.  If you’ve never been here, it’s hard to describe exactly what Brattleboro looks like, but I’ll try my best: picture patchouli oil, backpacks, the color brown, unruly facial hair, and a lot of vegetable-co-op-loving crunchy people carrying iPhones and driving hybrid cars.   While I can see where the yak wool may have caused a little confusion, I have to completely disagree with Geoff.  Besides my hat is red, smells nothing of incense, and is often found under the hood of a Death Race hoodie that reads “BETRAYAL” across the top.   That’s not Brattleboro, that’s badass.   Yes, I like to think that this mystical, magical, musical yak wool with a hint of Grandma love from Nepal hat uses all of its bad-ass-ness …to keep me warm.
Because I loathe winter. Every morning we leave the comforts over our over-heated apartment to the frosty parking lot to head to the gym.  I sit in the below-freezing car and writhe in pain.  Typically I start ranting about how this weather should be illegal, why would ANYONE want to live here, we might as well move to Siberia, and other nonsense stemming purely from the discomfort of my core body temperature dropping.

It is simply amazing, the love/hate relationship I have with this part of the country. This summer was fantastic. The hikes up Monadnock, the runs up Wantastequat, the kayaking, the bike rides, the forest…it is all so beautiful. I have never had endurance like I have since I started tackling these New England hills. I was thinking to myself, just about a month ago, that maybe…just maybe…I could stay here.
And then the sub-freezing temperatures settled back in.
There is some sort of point to this rambling, I swear.

I am a sucker for cliche motivational sayings and pictures, which is why I’m almost certain “Pinterest” was created just for me.  (I say “almost” because of all of those recipes, household organization ideas, and crafty stuff that infiltrate my motivational goodness).  On that site, in addition to “101 things to do with an empty paper towel roll” are a plethora of “what doesn’t kill you makes you stronger”pictures.  Like this one. 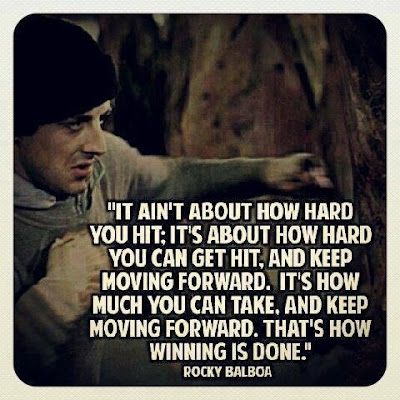 ﻿
My hand is still broken.  I mean, of course it is, it’s only been two and a half weeks.  But the novelty of “I broke my hand box jumping, isn’t that hilariously clumsy ?!” has worn off, and now I’m just irritated.  In fact, it has taken me more days (or, errm weeks) to finish this post than I care to admit.  My hand hurts, and I have to correct every other word for my fingers aren’t reaching as far as they are supposed to on the keyboard.  The lack of proper hand mobility has mysteriously affected my creativity as well, and this I give you: writers block.  (Thus, I apologize for the lack of posts.)
More notable, however, is the fact that all of my gains in the weight room are dissolving into a puddle of weak toothpick arms as I slave away on the treadmill and elliptical daily.
Injuries are humbling.
However, in an effort to not totally lose  my mind, faith, or hope, I’m going to stick with the “what doesn’t kill you makes you stronger” school of thought.  In a recent conversation with someone who doesn’t believe this pinterest-esque philosophy, they declared something along the lines of ” what doesn’t kill you only hurts a lot.”

That’s the point, isn’t it?  No one wants bad things to happen to them.  No one wants broken hands or debt or boring jobs or broken families or bad relationships or heartache…OR freezing cold, gross weather (I told you I was bringing this full circle.)   But sometimes in life, we have to roll with the punches. Take the bad, and make the best of it, let it make you stronger in one way or another.  Cant lift weights?  Speed work on the treadmill.  Hate freezing cold mornings? Think of it as acclimating for the next obstacle course race that contains a freezing cold swim.  Missing someone or something?  Use that heartache to make you appreciate what you DO have.   The SUCK makes the GOOD that much BETTER.  It makes overcoming our weaknesses and hurdles that much more glorious.  But only if you choose to see it that way.
In every struggle we have the choice to let it break us or let it help strengthen us.  Take your pick.
I pick strength…with a side of  kick ass hat to make it a little more bearable.