(For part 1 of the Runner’s World Half weekend, please click HERE.  Forewarning: there will be a disgusting amount of photos in this post. A 4 day field trip with 20+ social media gurus results in a lot of picture taking…especially with smart phones. Plus, I’m still so flabbergasted and honored over this amazing opportunity, that I want to share ALL of it.)

Friday morning we all piled back onto our party bus bright and early to get our day started at the Steel Stacks in Bethlehem PA.

The first unofficial business on our agenda was a ridiculously hilarious photo session between Katy and I, where we failed miserably to get some action shots in front of the Steel Stacks.  My phone is horrible under pressure.  Also, I’m pretty certain Runner’s World won’t be asking me to be their next featured cover model anytime soon. Regardless, much giggling ensued, and if nothing else, we get a gold star for enthusiastic effort.

The first official business on our agenda was a brief lesson on breathing exercises with Budd Coates, author of Running on Air.   Budd quickly talked to us about synchronizing our breathing with running cadence, and suggested we try it on our shake-out-run that we were about to do. 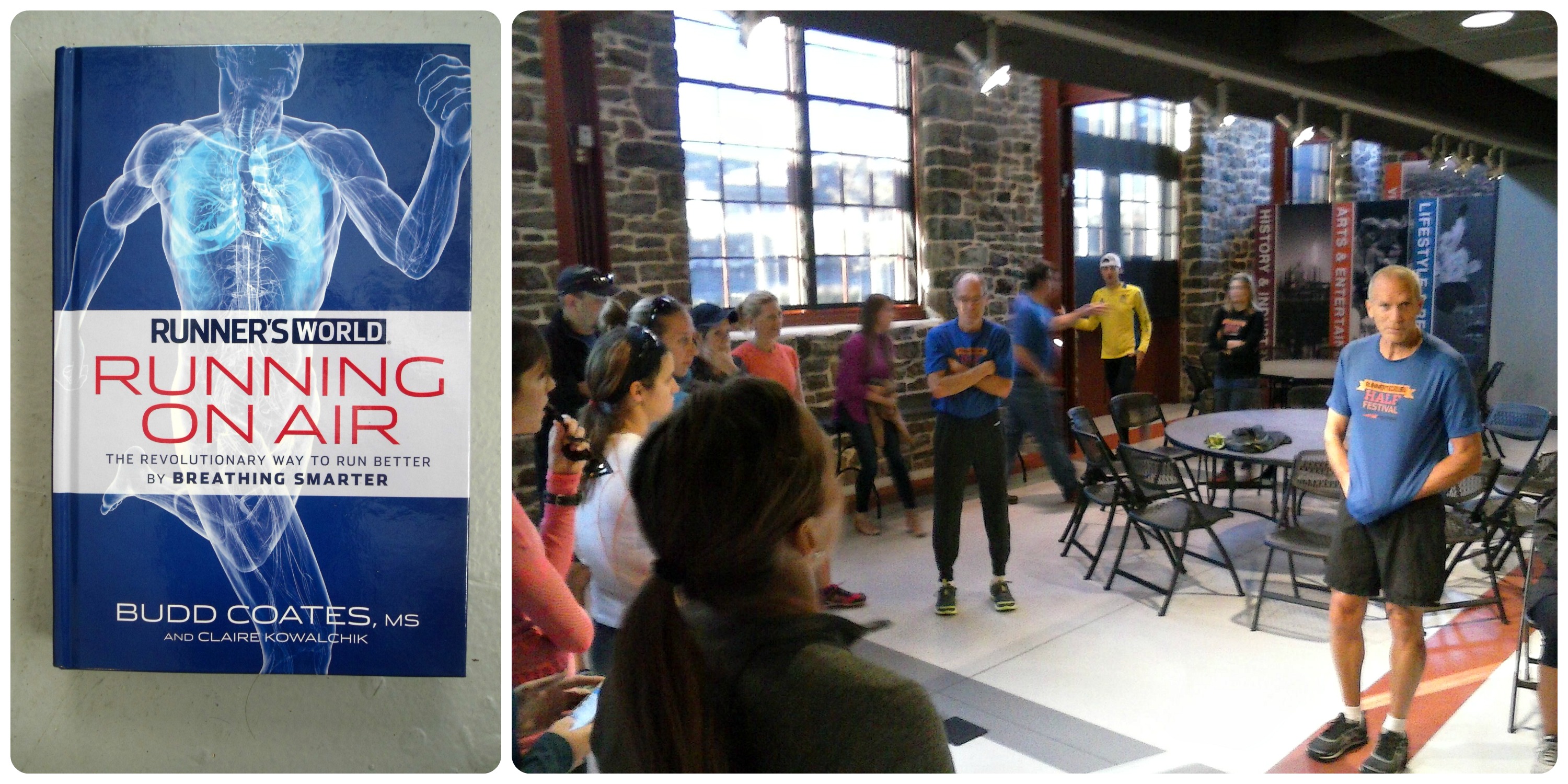 After only a few minutes of demonstrations, we were off and running.  Bart Yasso led us through the gorgeous streets of Bethlehem, PA.  Apparently, years ago, this town thrived on the steel industry, but now claims tourism as it’s number one industry. And I can see why people come to visit: the town is simply beautiful.

The pace of the group run was relaxed and enjoyable.  We stopped for multiple photos, because we are bloggers after all…it’s what we do.  I attempted the breathing techniques Budd Coates demonstrated, but they truly seemed to make my breathing MORE difficult.  I suppose I’ll have to actually read the book and then revisit the techniques at a later date. 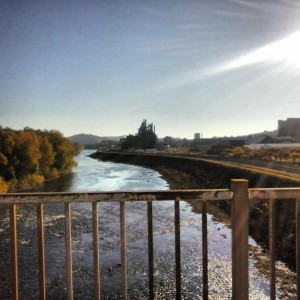 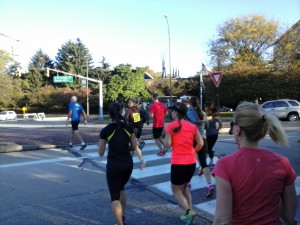 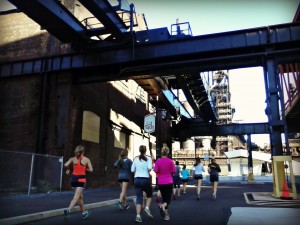 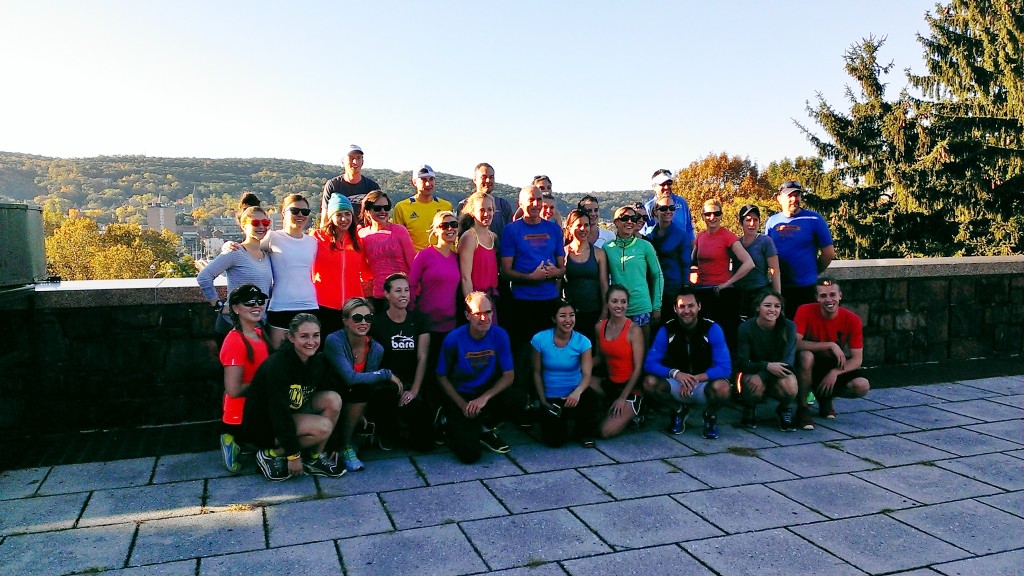 When we returned to the Steel Stacks we met Cindy of Running Skirts, who challenged us to the “Skirt Olympics”.  It was hysterical.  Basically, we ran about 50 feet from the start to a line full of bags.  Everyone grabbed a bag, and put on the skirt inside. Then we raced back to the start where we put on compression socks, and then raced back to the other end.   I’ve been harassing Janae of Hungry Runner Girl all weekend that she only beat me on a technicality…I thought we had to put our sneakers back on after the compression socks.  Video evidence: 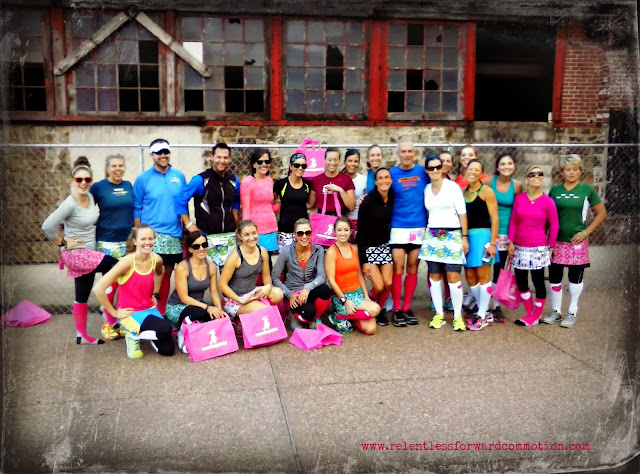 Next we headed inside the Arts Quest building for some lunch, and a presentation from the guys behind Altra Running.  I will absolutely be going into greater depth on Altra Running in a later post/shoe review, but the short story is this: running phenom (remember the 12 year old 2:45 marathon I mentioned in the last post?) Golden Harper found a need for zero drop shoes that still had cushion, but found nothing available in the current running shoe market to satisfy those needs.   So he began modifying traditional running shoes for himself and friends.  Long story short, from the popularity of those modified shoes, the Altra Running company was born.

Golden spent some time describing the differences in the current shoes available in the Altra Running line.  I spent some extra time with Altra’s Jeremy Nef, and showed him my concern with my current pair of Altras: they were too wide. I couldn’t tie them tight enough, and they were too loose when running.  Though I chose the “One” model because it was the most minimal cushioned shoe, Jeremy suggested I try the “Intuition 1.5” model, as it was built on a different last.  As you can see in the photo below, it was a significantly better fit. 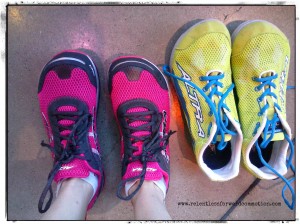 Next, Golden took us outside to demonstrate Altra’s 4 steps to better running:

He also started running up walls and other structures.  (OK that wasn’t part of the demo, but it did happen. I myself refrained from the parkour...) 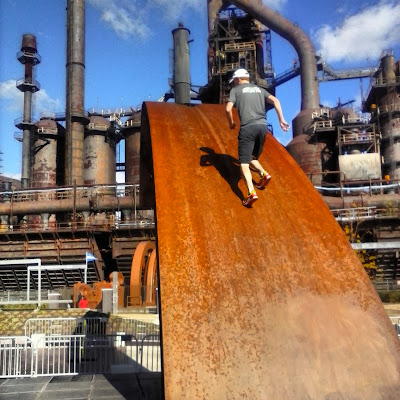 We were whisked away to a “Recovery for Runners” session with Melanie Douglass, who among many other accomplishments, created this amazing product called the Xfinity fitness band.  Again, review coming at a later date, but let me just say that it made the all-ready-difficult-yoga even MORE difficult (in a good “I really should do this more often” way). 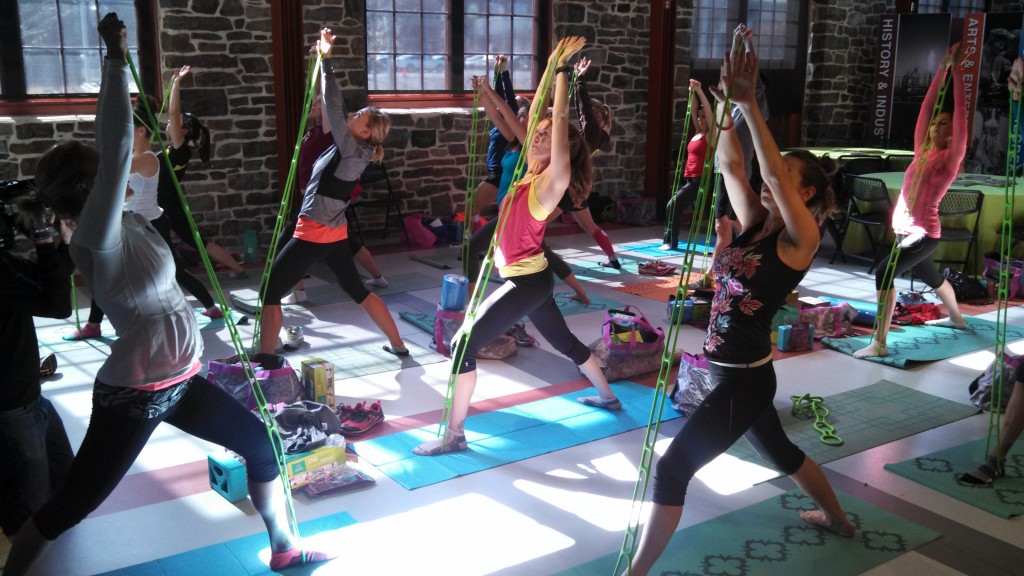 We were also given some great products from the new Lotus line of yoga gear. Designed with affordability in mind, they are reasonably priced and available at Walmart.  I personally don’t practice yoga enough to justify a $100 mat, so this was right up my alley.

Then it was lunch time. 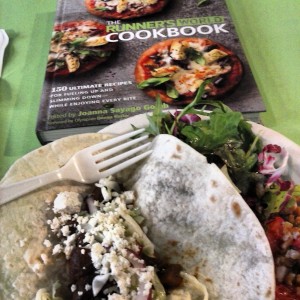 I filled up on two helpings of “Mushroom Tacos al Pastor”, “Caprese Farro Salad”, and some leafy greens, all from the Runner’s World Cookbook. Which, conveniently, we were given a copy of. Now all I need to do is learn to cook.

Joanna Sayago Golub, the editor of the cookbook, spoke about putting the cookbook together and answered all of our questions.  I sat next to her as we ate lunch, and asked her what it would take to make me actually enjoy cooking.  I suppose that was a trick question?

Next we had a VIP meet-and-greet with Olympic Swimmer (and cover of the November 2013 issue of Runner’s World) Summer Sanders. I felt like a jerk-hole because I had no idea who she was. Granted, when she medaled in the 1992 Olympics, I was ten years old and was more preoccupied with things such as the New Kids on the Block, so I gave myself a pass on this one (plus I hadn’t had a chance to read this issue of Runner’s World yet.)  Summer was an amazing speaker, driven and motivating athlete, and incredibly enthusiastic.  Plus she runs, so what isn’t to love? 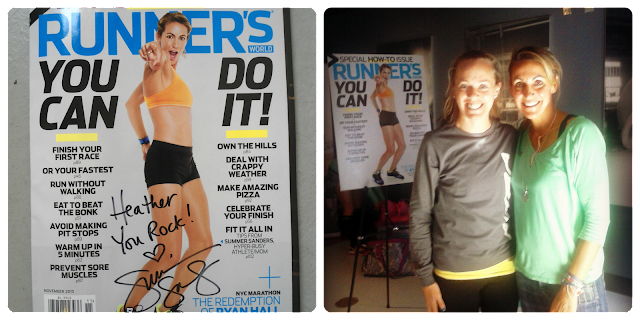 Then it was back to the ArtsQuest building for a demonstration of the Pro-Form Boston Marathon treadmill with iFit technology.  Long story short, the treadmill can simulate any run that you can possibly find on Google maps by automatically adjusting incline…and then some.  Including, a hike UP MT EVEREST.  They had my attention there.  Can you imagine?  “Hey Heather, want to go out for lunch today?” “Naah, I can’t, I’m hiking Mt. Everest on my treadmill!”.  Boggles my mind.  Some quick stats: 20 % incline (OK I know Everest has steeper parts, but still…that is steep for a treadmill), 6% decline, and a top speed of 15 mph. This treadmill means business. 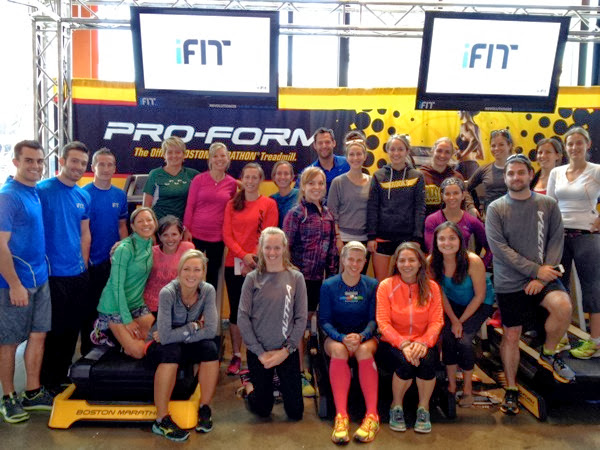 After the Pro-Form demo, we were sent on our way to pick up our bibs and shirts (details on the race shwag will follow in the actual race recaps) and mull around the expo.  Katy and I checked off a bunch of challenges on the scavenger hunt, and then I joined the half of the group that was heading back to the hotel for the night.  It had been a long and exhausting day, and I was ready to relax and think about the races that were to come the next morning.  Thankfully, my awesome roommate came prepped with “Purse Wine”.  That’s right, wine in a purse shaped box. I wouldn’t believe it if I hadn’t seen it with my own eyes. 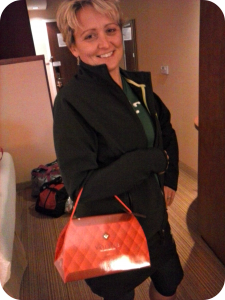 Normally, I’m not one to drink alcohol the night before a race (or in this case, two races) but the day was so overwhelming (in a good way!) that I welcomed one glass of wine to help me relax. Besides, we had so much to celebrate,  it was a fantastic day!

(next up, race recaps, as I tackle the Runner’s World Half Festival Hat Trick!)

Do you typically take it easy the day before a race, or are you on the go?  Your personal thoughts on alcohol (in moderation, of course) the night before a race?