Back in 2007 shortly after I started running, the USATF came out with their big ipod ban. And so I quit running with an ipod, cold turkey. I figured if it was going to be a strict rule, I better quit while I was ahead. I wasn’t one of those who “needed” music to get me through a run, and I was better off not becoming one. Besides, back then I was doing almost all of my runs with then baby Rowen in the jog stroller, and it wasn’t really safe to have music blaring in my ears while running a little baby down the street.

And so it was, that I was a non music running mama.
Somewhere along the line, the USATF has since amended the rule to allow ipods and related devices at the race directors discretion. And I’m pretty sure if you are out there trying to win, you are supposed to be ipod-less as well. I don’t know the exact details of the new laws, as I don’t plan on winning any marathons any time soon. I’ll be sure to check them out in depth when I start approaching my BQ mark, just to be safe.
But also, somewhere along the line, completely unrelated to the USATF amendment, I seemed to have amended my own status to “ipod loving running mama”. 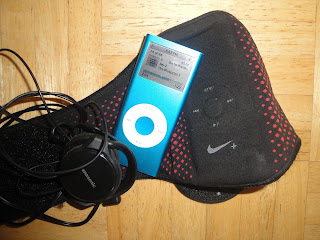 It started off when I realized that while running with one in a jog stroller was nice….running with two in the double jog stroller was a chore. So I opted to take advantage of the alone time as much as possible, even if it meant running at the most obscure times of day: 5 a.m when it’s still dark out, 12 noon in the blazing sun, or 5 pm dodging the end of the workday traffic, it didn’t matter, as long as I wasn’t pushing the monstrosity that is the double jogger. And with the solo runs came the freedom to wear the ipod and completely zone out if I so chose.
So I trained with the ipod most days, but always raced without. I love taking in the race day vibe, scene, sights, and sounds completely uninhibited by music in my ears.
And then one day, I raced a 5k with my ipod. I’m not sure WHY, as I never raced with music, but I did that day. Having the music in my ears allowed me to completely drown out the sound of my gasping, huffing and puffing. When I couldn’t hear that, it didn’t hurt as bad, and I ran myself to third place overall female. Huh, how about that?
Which brings me to the whole point of this post in the first place. Running is SUCH a mental game. Of course you need to put in the training as well, but your brain can certainly make the difference between a good race and a bad one, a PR or fizzling out in the end. As it stands right now, I run faster, further, and harder when I am not distracted by my labored breathing. Sounds silly, I know, but being in that “bubble” with my music puts me in a zen place.
This weekend, I’m racing a half marathon. Racing myself, racing my current PR. A 1:59:31, ran 3.5 years ago. To be honest, I haven’t “raced” a lot of half marathons since then. The few I have done include a pregnant run (Myrtle Beach 2008) a just post-baby-hadn’t-trained-at-all run (Myrtle Beach 2009) a PR attempt gone horribly wrong thanks to the HOT weather and GI issues (VA Beach R&R 2009) and the “was this a half marathon or a giant photo shoot” fun run (Disney Princess 2010).
This weekend, I thoroughly plan on PRing. I really do. My body is up to it. I’ll be on my “home turf”. Sleep, nutrition, etc will be spot on, there will be no 8+ hours of car travel. My training wasn’t 100%, but it was a lot better than it’s ever been before a half. I’m feeling good.
My mind, on the other hand, is messing with me. And I’m starting to think “well if I run with the music, I’ll be able to zone out and run fast and it won’t SEEM so bad”…..
Do you see what’s happened here? I’ve become dependant on the darn ipod. UGGGH. I’ve actually convinced myself that my body is not physically capable of going as fast for as far as it could if I had Jay Z and Paramore serenading me for 13 miles.
That’s not cool. And not only is it not cool, it’s a big no no in the triathlon world. Though I’m pretty sure that without an ipod I’d start singing to myself around mile 70 on the bike ride of an Ironman, out of sheer boredom. (They can’t DQ me for having a bad voice, can they?)
So while I completely plan on weaning myself of the feeling of mentally NEEDING an ipod while pushing myself, I fear Sunday may be too soon to go without one.
What to do, what to do.
Ipods ARE allowed in this race, so I’m not breaking any rules. But I was planning on running with a super fast friend who offered to pace me, and I don’t want to be rude by running the entire way in my music bubble (though I’m pretty sure I won’t be talking much by the end anyways, haha)
Can you tell I’m in the week before a big race mode? Freaking out over insignificant things.
So let’s end this rambling post with a Q & A:
Do you train with music? Race with music? Do you feel like you NEED music, or am I crazy over here? What are your general thoughts on this mess? (mine, and the ipod race ban in general)