Ten days unplugged from the great world wide web (two of them in complete blackout, couldn’t even place a local call if I wanted to) initially sounds like torture to a semi-professional-social-medialite.  That’s the unofficial career title I’ve given myself around here, incase you were wondering.  But as I sit in front of my laptop today, desperately trying to catch up on emails and overdue posts, I wish for nothing more than to be shivering my butt off in my frosty tent at Nova Guides, without any possibility of sending a tweet or posting to Instagram.

The transition back to the real world after the 6 day TransRockies Run is rough.   I’m surrounded by Ziploc bags full of smelly tech gear that amounts to a minimum of 7 loads of laundry, a handful of cameras filled with hundreds of pictures and videos to edit (over 700, last I checked), and a heart full of memories that I’m desperately trying to preserve, but not quite sure I’m ready to share with the rest of the world. 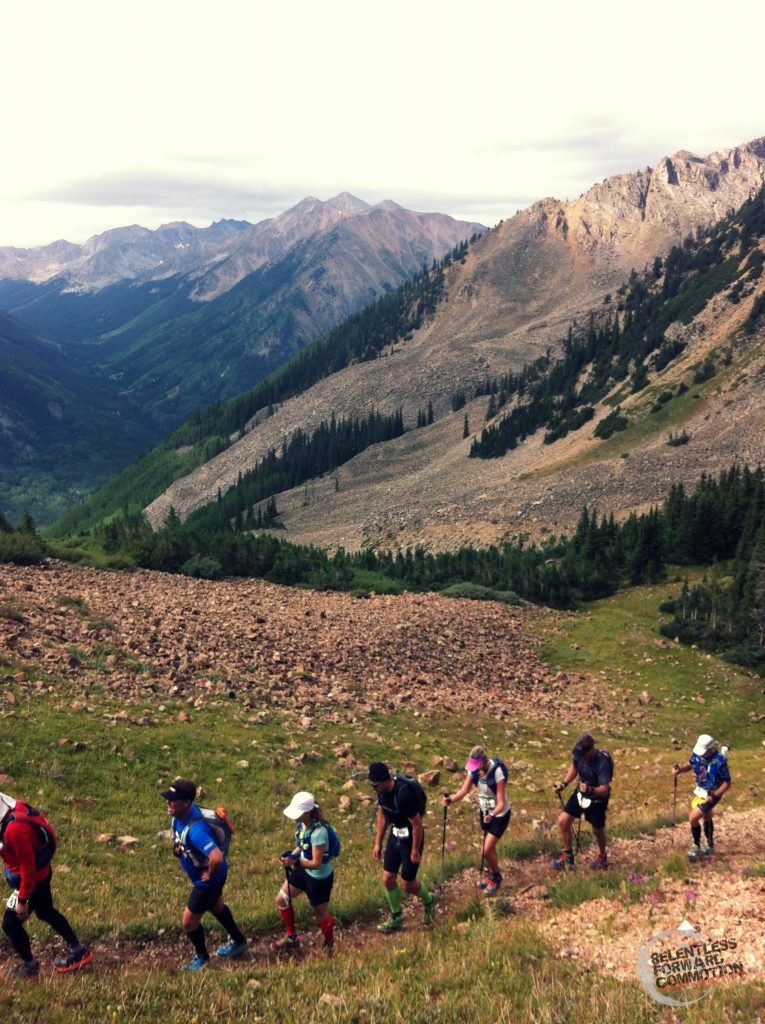 A snapshot from over my shoulder on stage 2, climbing towards Hope Pass.

All of course, while “Highway to Hell” plays on repeat in the background of my mind (my TRR family knows exactly what I mean)

I’ve decided that there is absolutely no way my somewhat obnoxiously verbose self could fit this experience of a lifetime into one race recap, so I’m going to write seven of them: one for each stage, plus a preface.  And like the seven stages of grief, I hope the last post ends with some sort of acceptance.  Because currently, I’m pinned between a huge load of denial that I can’t still be in Colorado, and an adult sized temper tantrum because I’m not still in Colorado.  It was that incredible of an experience.

Geoff and I flew into Denver Colorado Sunday the 7th.  We jockeyed for the window seat, and even though technically American Airlines had assigned it to Geoff, I somehow managed to steal it out from under him.   As the plane started descending into Denver, I was certain we had somewhat boarded the wrong flight, or the pilot had gotten lost.  As far as my eyes could see were vast, dry, flat plains.  Not a mountain nor tree in sight.  This was not the Colorado I had envisioned.

But my disappointment wouldn’t last too long, for as soon as we grabbed our luggage, our Vermont-relocated-to-Colorado friend Sarah picked us up, and our adventure began.   It only took a few hundred feet of driving out of the Denver airport before the mountains started to come into view.

It was slightly out of the way, sure, but we were stoked to catch up with an old friend and get a brief glimpse into her new life.  And speaking of glimpses…I couldn’t take my eyes off of the windshield.  Our first true up close mountain view was of the Flatirons.  Geoff and I were practically drooling at the sight of mountains, while Sarah and her friend were laughing at us, saying “you haven’t seen anything yet.” 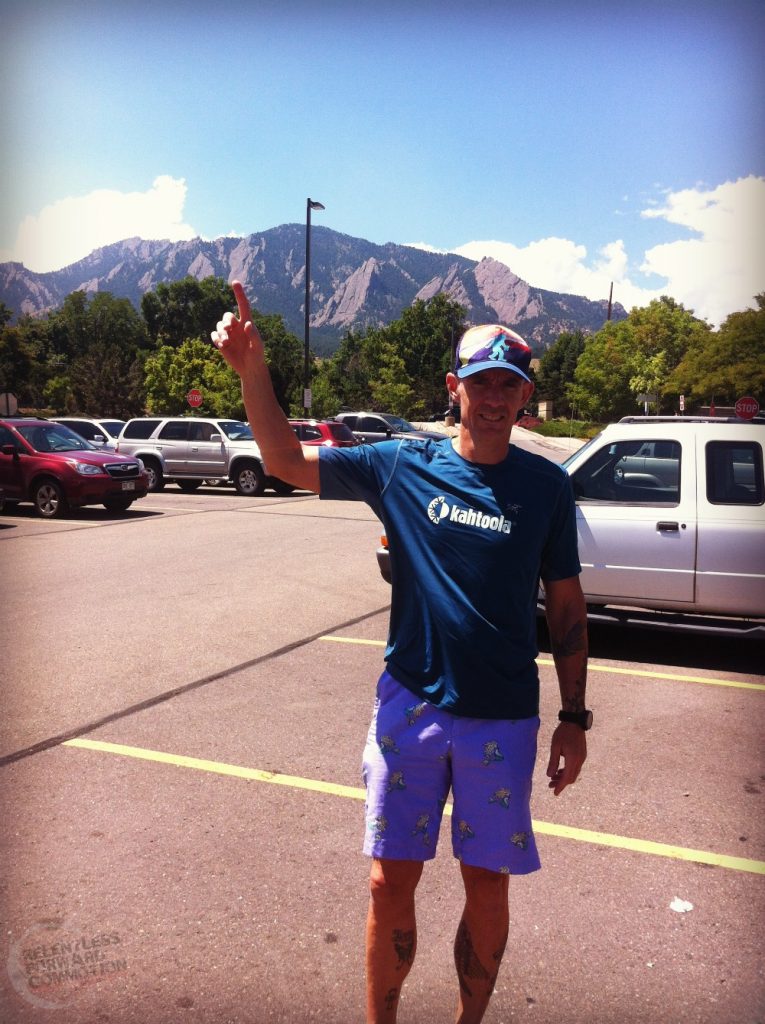 Side note: TSA, two flight attendants, and the lady at the campground all commented on Geoff’s mermaid shorts. We even got extra pretzels on the plane, thanks to those shorts…

Next stop: Buena Vista.  For those of you who think that it might be pronounced like the town near Disney World (I did), let me be the first to tell you: it’s not.  BYOUNA Vista, as the locals call it, was the town that the 2016 TransRockies Run would start in, and the town we’d be staying in for the next few nights until the race started.    The journey to BV was such an eye opener…again, I truly had envisioned my own version of Colorado, and it was nothing like the scenery I was actually seeing in person.  In my head, Colorado was a lot like Vermont: green, lush, mountainous…only with much bigger mountains.  In reality, Colorado was dry, barren, and desert like, full of ranching and gold mining history.  It was absolutely stunning, in its own way. 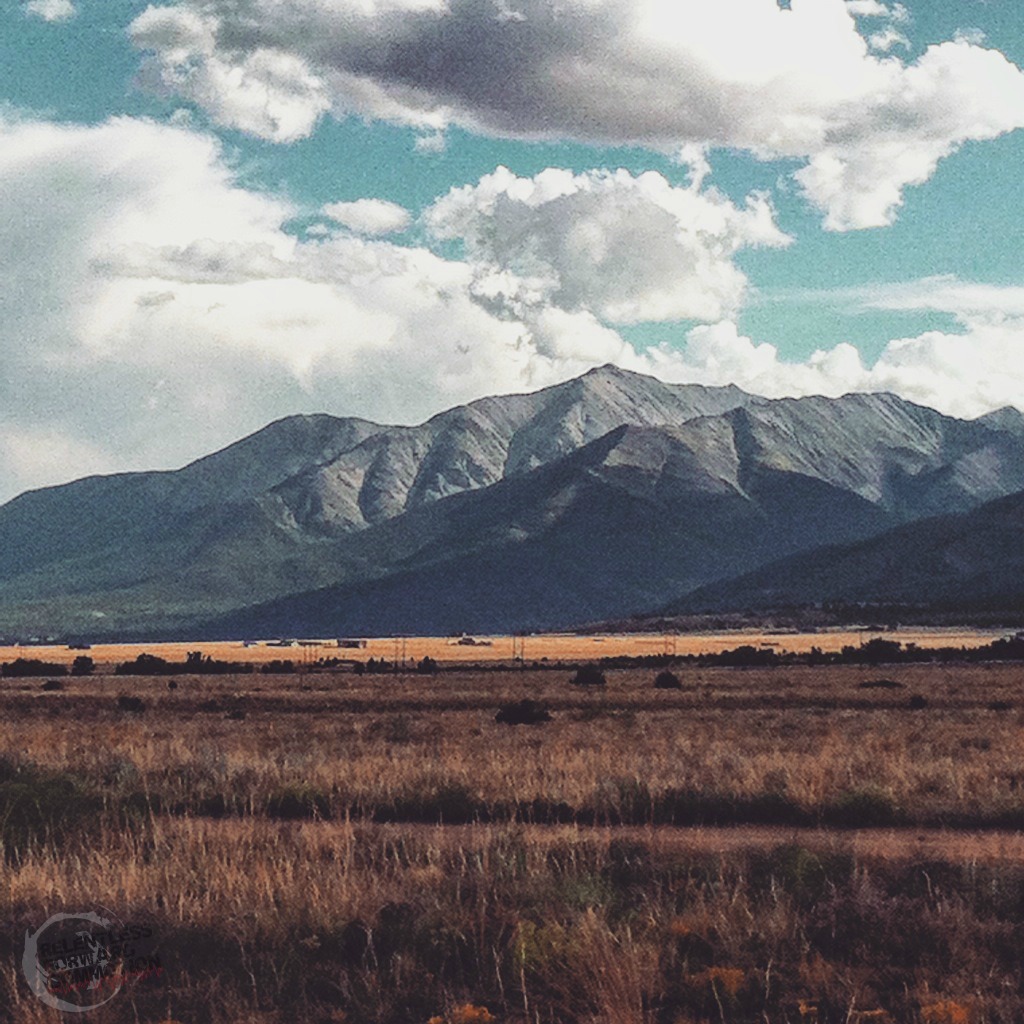 I can’t remember the name of this mountain. Or most of the mountains. They were all massive, and amazing…

We checked into our adorable little cabin at Arrowhead Point Campgrounds, and immediately started to explore.   And by “explore” I mean hike to the top of a very small hill, marvel at how out of breath it made us (hello, altitude!), then meet up with our Myrtle Beach friend Jen for a beer, despite everyone’s warnings to avoid alcohol for the first few days at altitude. 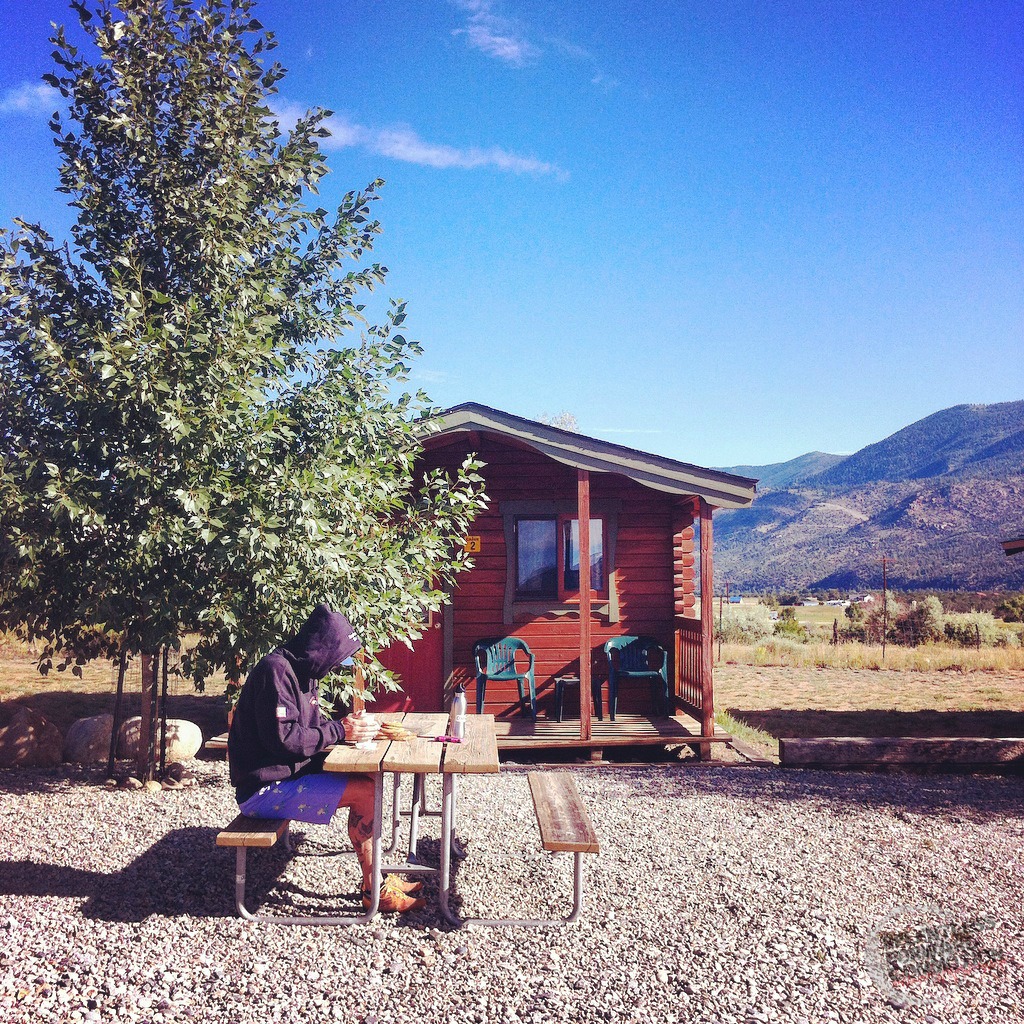 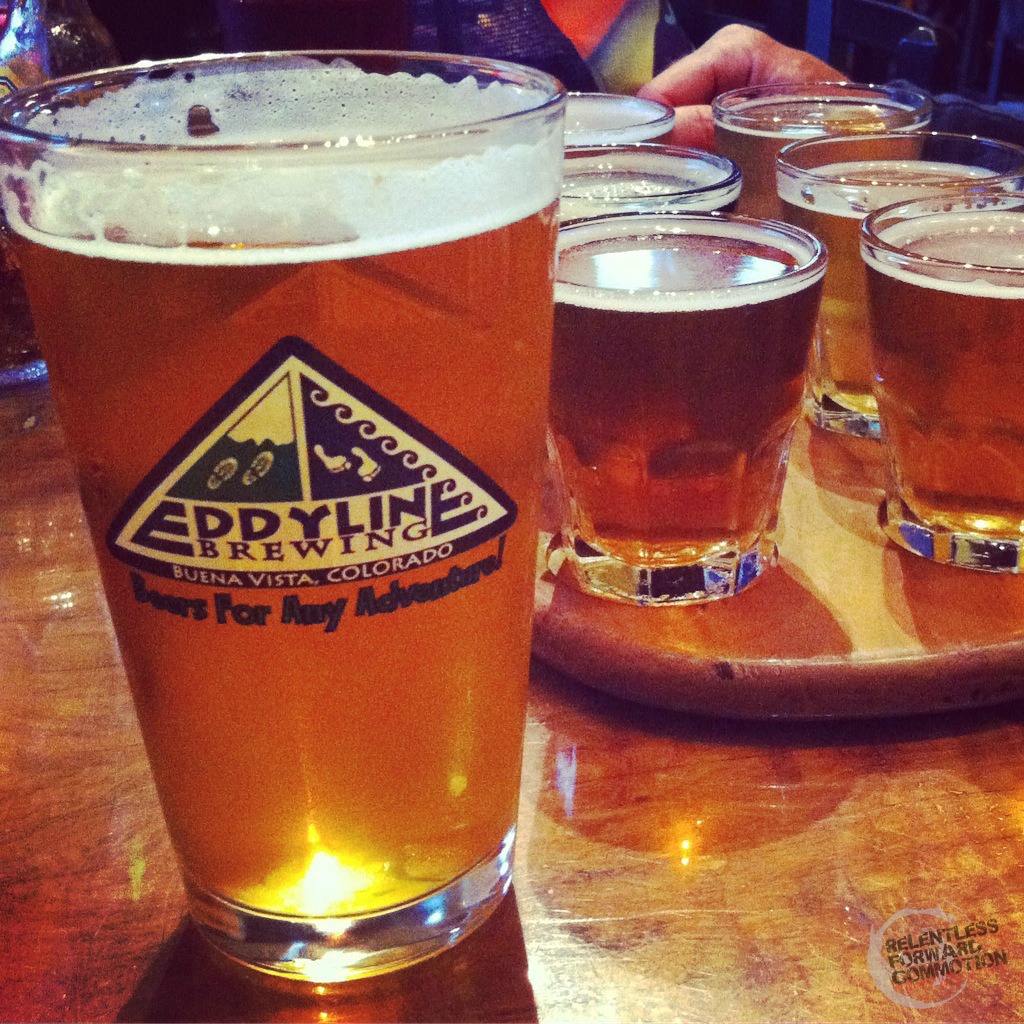 For the record, I did not regret the beer decision.  Despite a little dizziness when we stopped for gas on our way through Leadville (10,000+ ft) I never experienced any ill effects from the altitude.   Scratch that, I had the worst chapped lips of my entire life for 10 days straight.  But other than that, no negative side affects.  However, from what everyone has told me, each trip from sea level to altitude can yield different results.  Just because I didn’t get altitude sickness this time doesn’t mean I won’t get it next time, and vice versa.  Regardless, no altitude sickness this time, and I’m very grateful.

The next day the three of us headed into Buena Vista for food and race registration/check in. 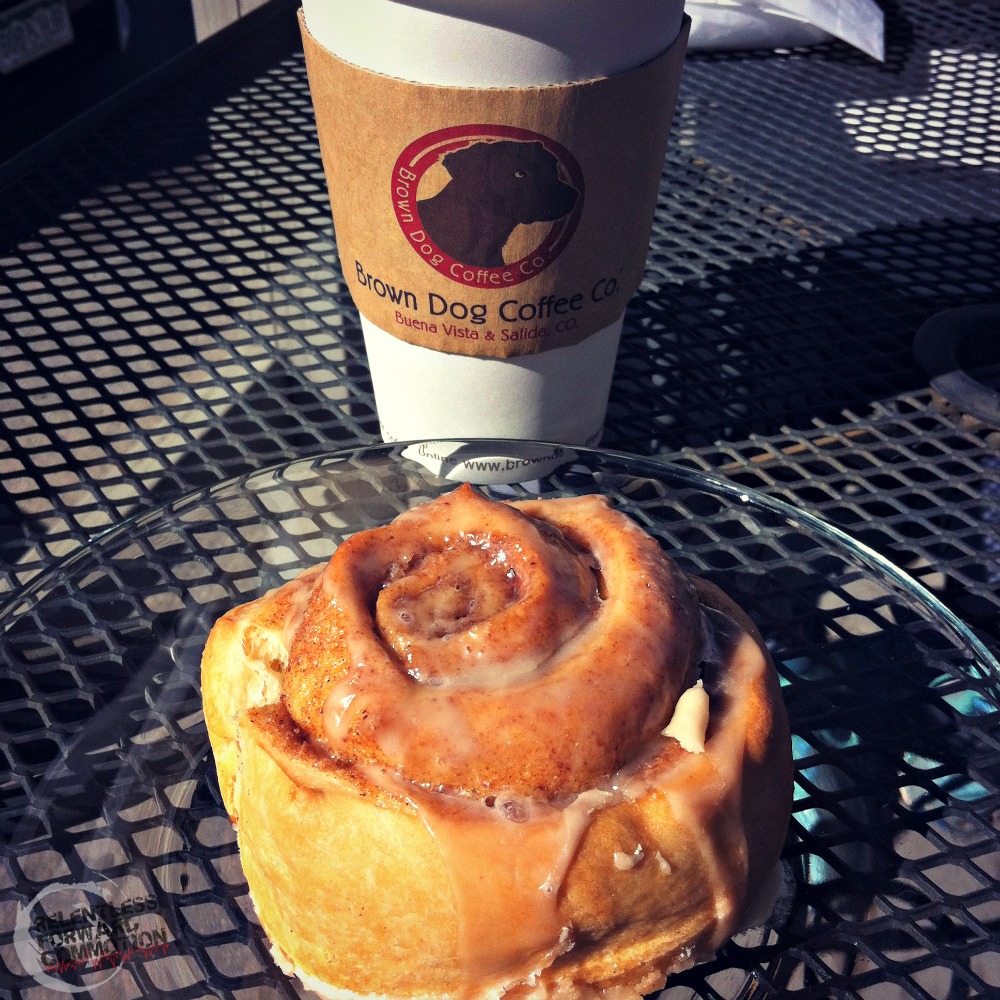 Despite the fact that “downtown” Buena Vista is incredibly tiny, we still managed to get lost.   You see, registration was advertised as being across the street from Eddyline brewery, the same place we had eaten the night before.  Except once we got there, we found nothing. So we wandered. 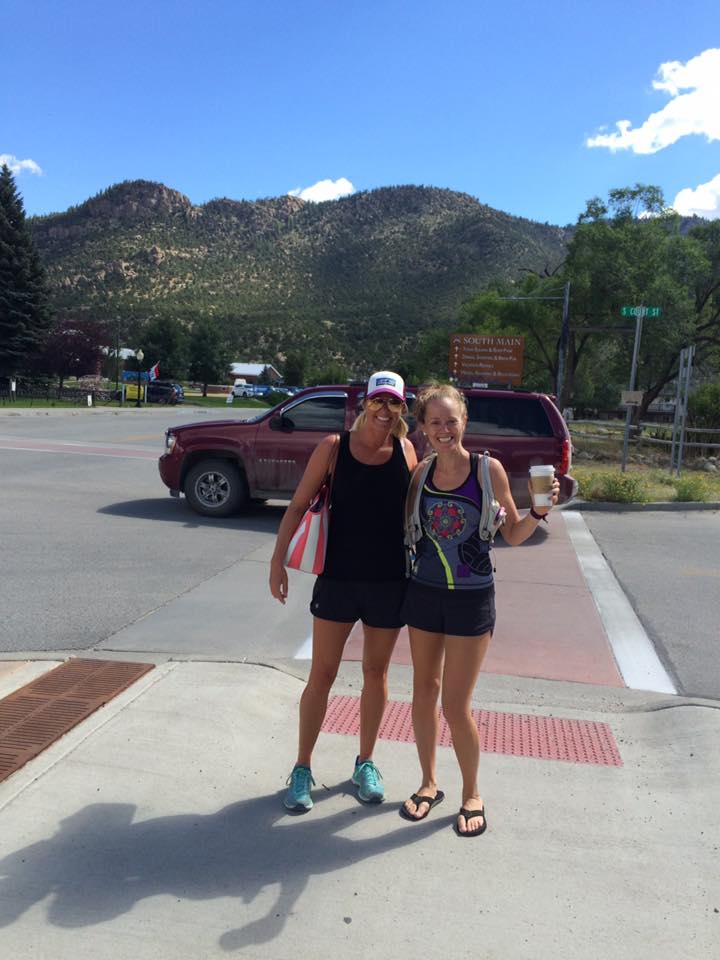 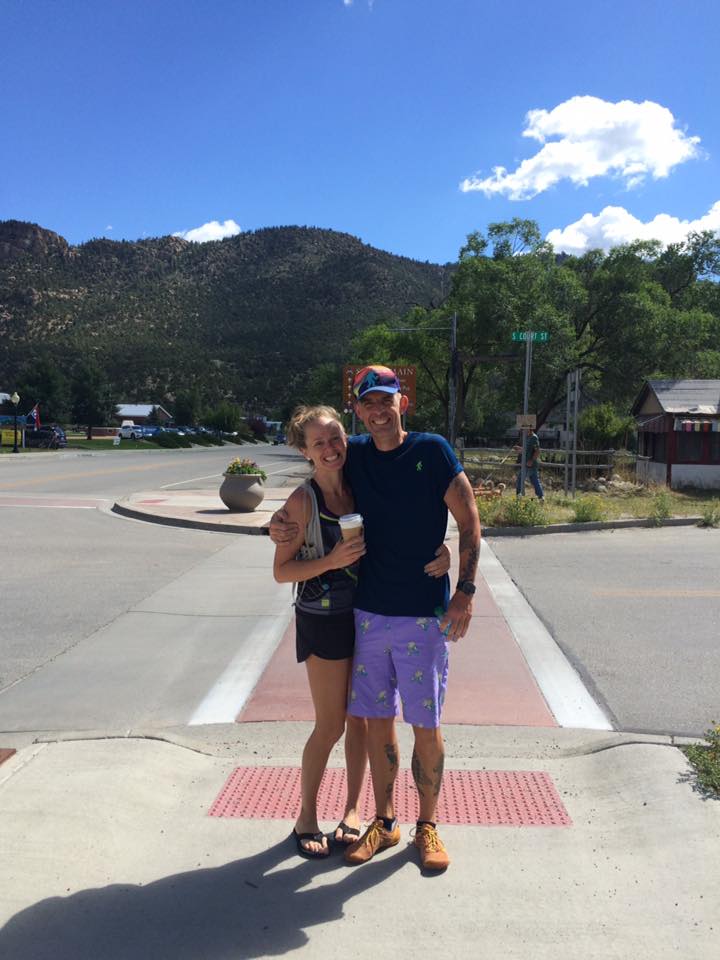 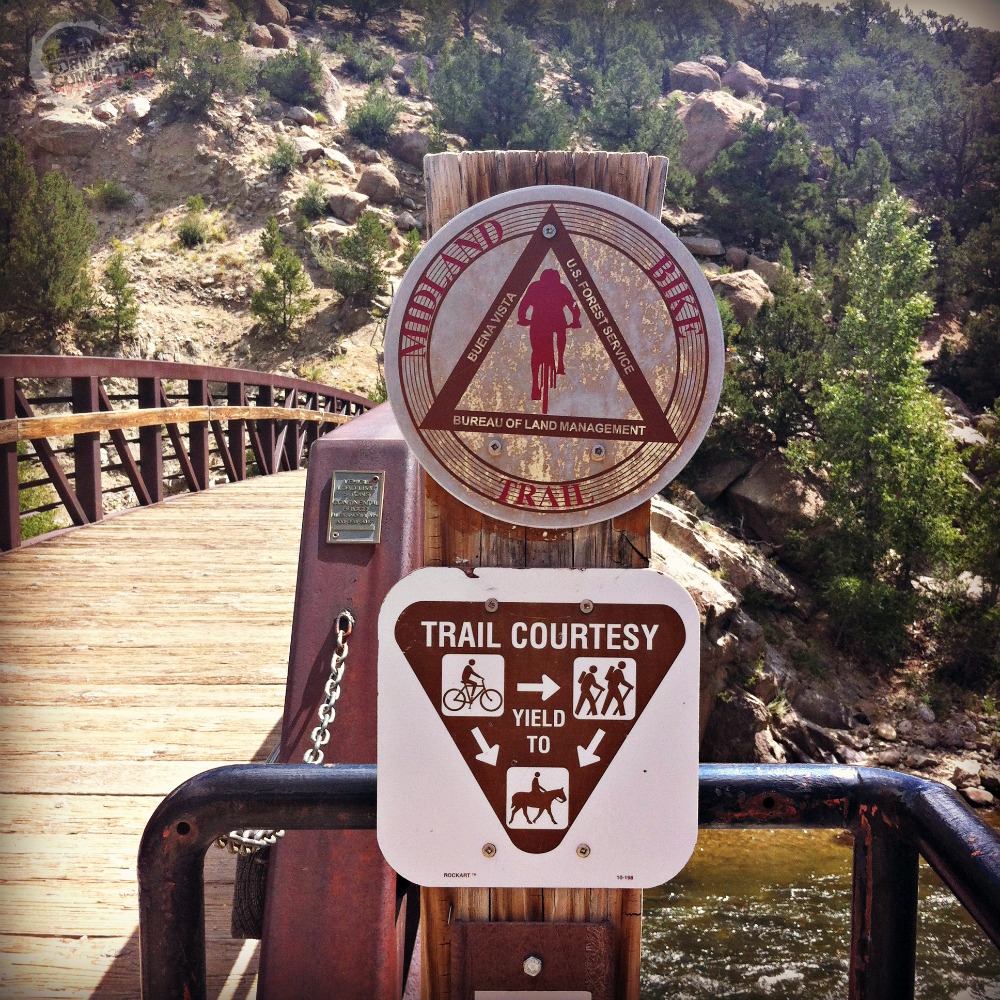 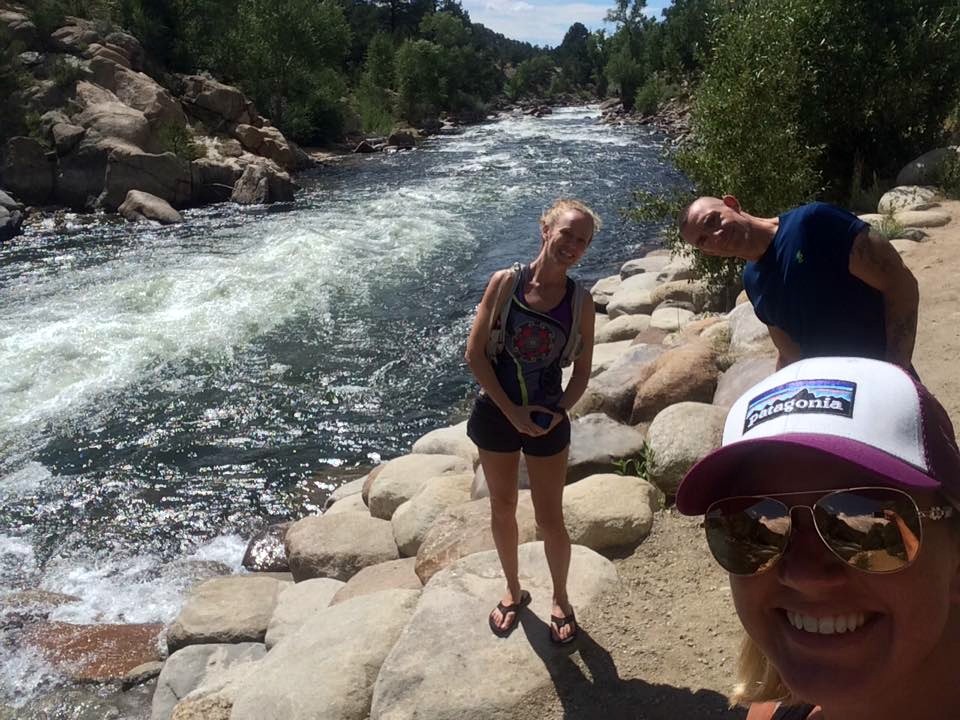 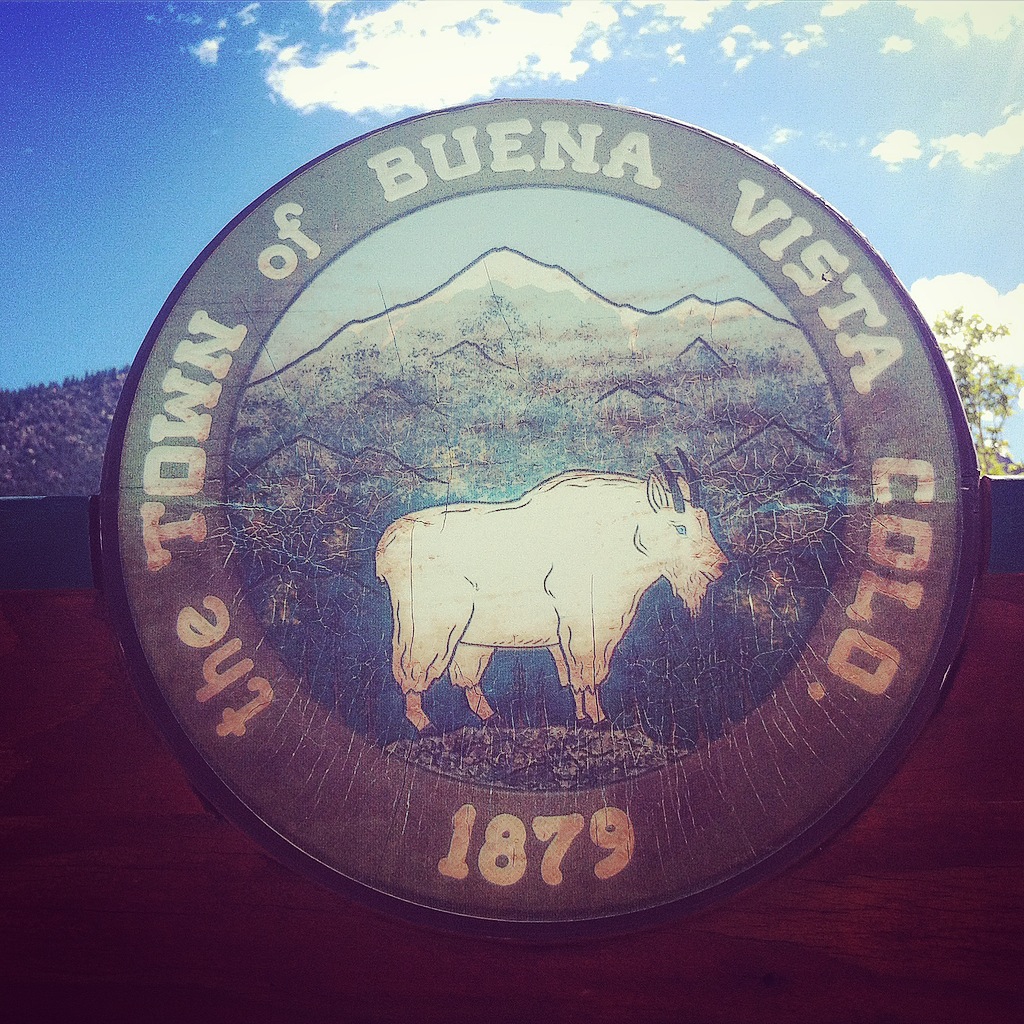 We got in the already long registration line across the street from the correct Eddyline, and reality began to set in.  It was here at check in that I finally began to freak out.  You’d think the sight of the massive mountains surrounding me might have done it, but no…it was instead the GIANT bag I was given to carry all of my belongings in that caused me to finally wrap my mind around what I was up against: 120 miles and 20,000 feet of elevation GAIN.  At altitude.  We were surrounded by incredibly fit looking athletes, and I had suddenly felt like I didn’t belong there.  At all.

So I eased my fears by getting *in* the bag they gave me.  Credit to Lauren C. for the inspiration. 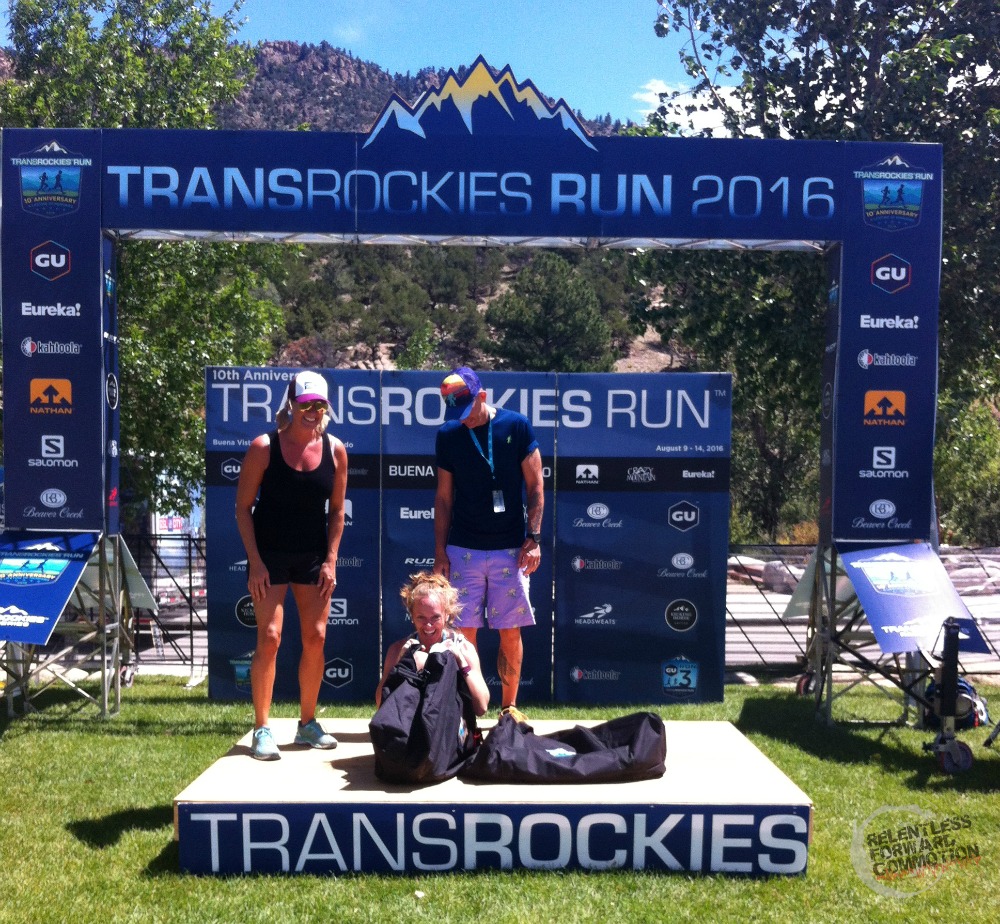 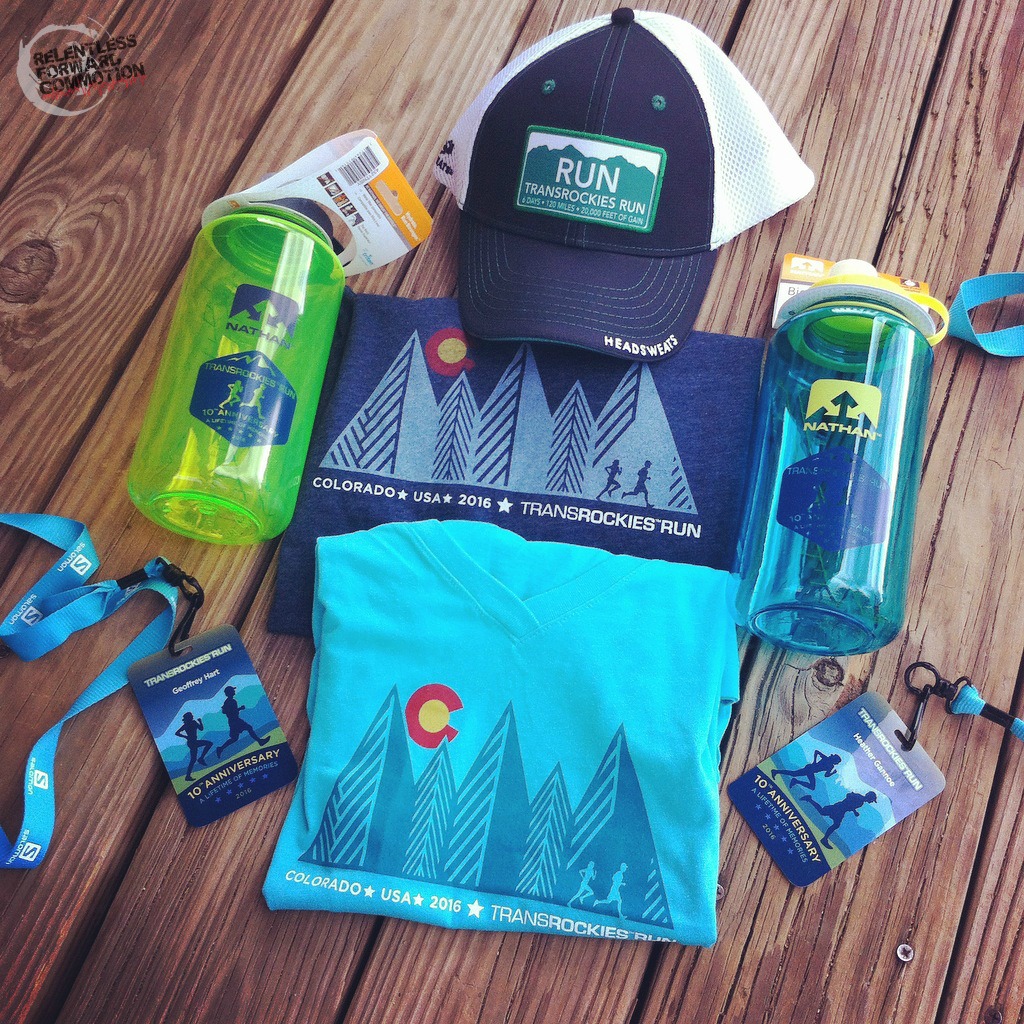 After we got our stuff, we headed on the long adventure back towards Jen’s car (remember, we got lost) stopping at The Lariat for the most amazing and satisfying veggie burgers. It was the giant “Saloon” sign that drew us in (who goes to the Wild West and doesn’t stop at a saloon?), and the great atmosphere and delicious food that kept us there.  Nothing like comfort food to calm you down when your nerves are starting to skyrocket.

And then it was back to our cabin to pack and prepare our bags for the race.   The idea was that the TransRockies Run staff would transport your gear from stage to stage…but only what you could fit into the bag you were given.  Initially I worried about the difficulty of such a feat, until I realized that this bag they gave me was hands down the biggest duffle bag I’ve ever owned.  Ever. (Please see picture of me sitting IN the bag, above).   And I easily fit EVERYTHING I brought to Colorado with me, with plenty of space to spare.

Fast forward to 5:30 pm, we returned to downtown Buena Vista for the opening ceremonies and mandatory meeting. In other words, the true “sh*t’s about to get real” moment.   Thankfully, there was more beer to help quell my nerves, a theme that would carry on for the next 6 days.  The beer, that is, not my nerves.

Thank you, Crazy Mountain Brewery for sponsoring this race. 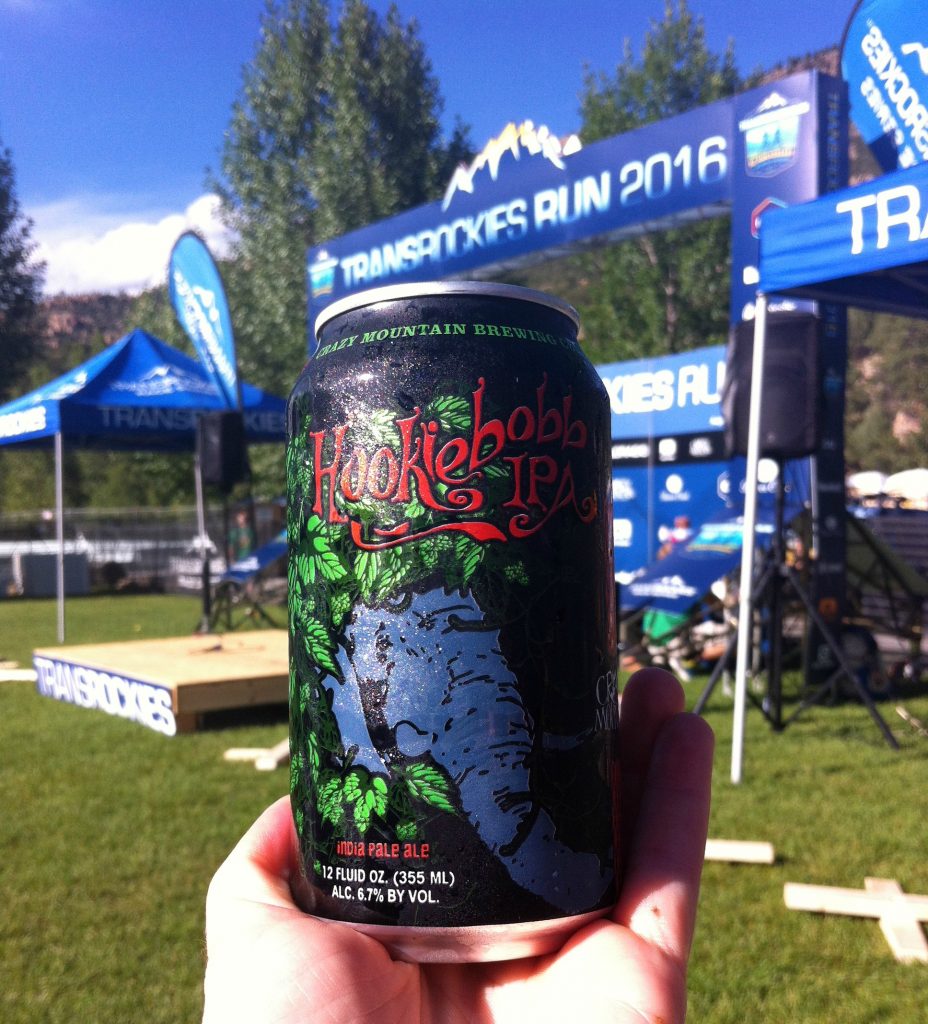 An adorable opening ceremony where local kids carried flags of the countries participating in the race, followed by some safety and logistical information.  I actually went out and bought a notebook and a pen so I could write down the details of each day, specifically so I wouldn’t forget them when it was time to write these posts. I wrote nothing down, and now I’m forgetting the details. 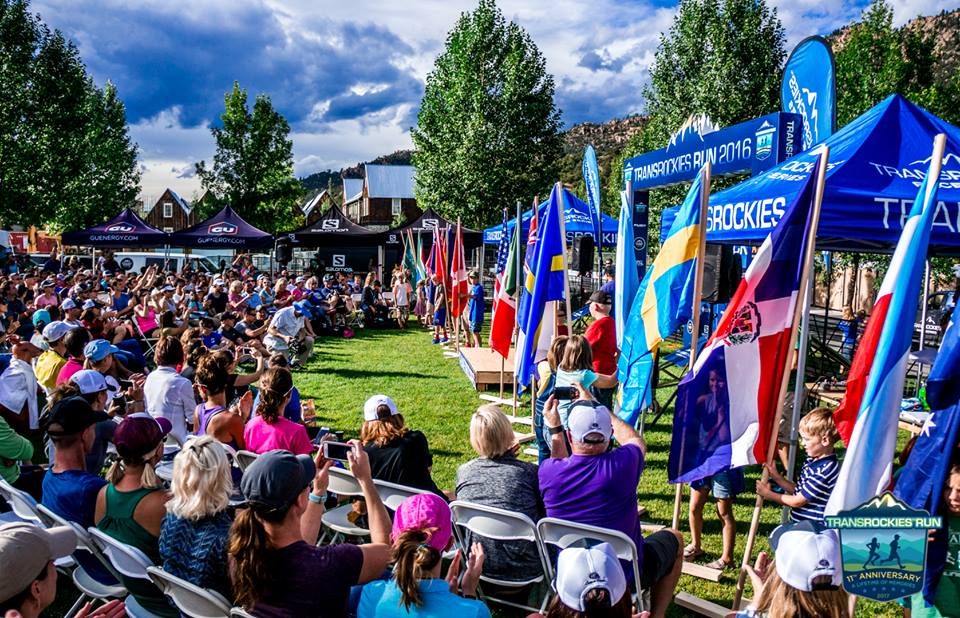 …then we were off to our last night in a real bed for a week.  I say that so dramatically, but the reality is, Geoff and I sleep on the floor every night in our house.  Ha.  I knew we were in for an adventure, but at that time, I had absolutely no idea how incredibly amazing it would be.

So there’s your preface.  Nothing overly exciting, but just like a race, I needed a warmup before I get into the actual mileage of the recap.  Brace yourself, it’s going to be a long 6 stages of reading…