In my short 7 year career as an official “runner”, I’ve heard numerous opinions regarding the post-race bling.  Some people love them; so much so that they actually pick races specifically based upon what finisher’s medal they will receive.  Other people don’t care about the medal specifically, but appreciate the memories and significance that the medal represents.  There are those who couldn’t care less about the trinkets, and even give the medals to their kids to play with.  And lastly, there are people who believe finisher’s medals are absolutely absurd, in the same school of thought that some people believe giving EVERY kid in the tee-ball league a trophy at the end of the season, even if their team never won, is absurd.  You know, the “we can’t ALL be winners” idea.

I have run the whole gamut of opinions at one point or another.  I’ve run races simply for the awesome medals.  The most plain, boring medal I own is probably the most significant to me (2005 Myrtle Beach Half Marathon.).  I’ve given a handful of “virtual race” medals to the kids to play with.   And I think belt buckles should be reserved for 100 miler+ distances, because you’ve got to really earn one of those.  (Just my opinion, and you know what they say about those).

But one thing is for sure: I have a lot of medals.

A spur of the moment facebook post the other morning inspired this post.  You see, I like to tell stories, and captions on a photo can never do those stories justice.  So here we are.

Between the years of 2007 (when I first truly started racing) and 2011 (when I moved back to New England) I ran A LOT.  I lost count of how many races I participated in, and I had a wall full of finishers medals (and trophies, plaques, and pint glasses) to show for it.   At the time, they all meant the world to me, each one a notch in the belt of me believing I was truly a runner, something I had never dreamed possible years earlier.

And then my world turned upside down.

And when it did, nearly everything from my past, specifically between the years of a failed (and emotionally destructive) relationship, became the enemy. People, places, objects…I loathed them all. I wanted reminders of the past like I wanted a tetanus shot, or a hot poker to the eye.  In other words: I hated these reminders just as much as I hated what had happened to me. But as I purged things from my past: clothes, pictures, household goods, I couldn’t seem to part with the medals. Not just yet.

So I hung them in the dark bedroom at my parents house and let the dust collect around them.

Last summer, I began to find happiness again.  And when I moved in with Geoff late last August, I took a handful of OCR medals over to our apartment, and left all of these behind, hanging on the wall at my parents house.  Again, I  considered getting rid of them, as they evoke memories of what now feels like a completely different life. A life that most days, I’d still rather forget, despite all of the healing.

Fast forward to present time. My parents are getting ready to move.  The days of storing all of my junk in their spare rooms in effort to avoid having to do anything with it are over.  The medals are no exception.

While spending some time at their house last week, I was mulling through the contents of what was once my closet, slowly making donation piles, when the medals caught my eye.  What should I do with them?  Trash them? Donate them?  I walked over to the shelf on the wall where they reside and slowly started taking the dust covered medals down one by one. I looked at each one, really took the time to analyze the design, the feel in my hands, the color of the ribbon.  And that’s when the memories started flowing.

There was my first marathon. Marine Corps, 2007.  My oldest son had just turned one year old.  I dove head first into marathon training, only to be sidetracked for my last few long runs by a still nursing one year old who never slept, returning to college after a 5 year break, and an untimely and heartbreaking miscarriage only two weeks earlier.  Despite everything in the universe telling me not to go, I went and ran anyway, and finished in a respectable 4:37:00.  Didn’t beat Oprah, but I was still pretty proud of myself in the given circumstances. 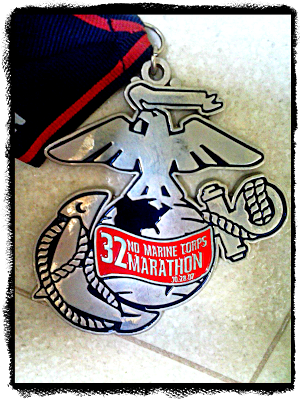 Survivor Harbor 7 race.  I ran as a Sherpa for the Cancer to 5k program.  I helped push a cancer survivor to run the longest distance they had ever completed.  That race wasn’t about me, but it still meant the world to me (read the recap!) . The night before, my sister and I spent hours in the hotel room assembling these homemade medals for those in the program.  Because the race itself wasn’t giving out medals, and my sister wanted the participants to have something to commemorate their race.  I will never forget the look on the faces of the Cancer to 5K finisher’s faces as they received their very first medal after their very first race. 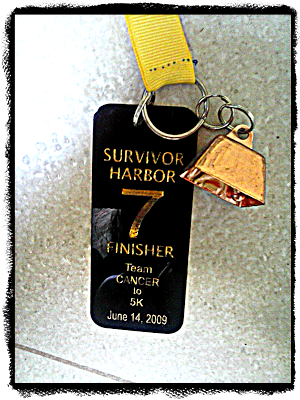 Beach to Battleship.  This is a 140.6 triathlon (yes, an “Ironman” just not sponsored by “Ironman) that I ran as a part of a relay team (we had a swimmer, a biker, and you guessed it, me, who ran the marathon).  Thinking of this race always makes me laugh, and is a story I often retell today.  Having NO IDEA what time I was going to start running (nature of a relay), I didn’t hydrate properly, nor feed myself adequately.  My marathon started late in the day, and ran well into the evening.  I bonked, HARD, somewhere around mile 15.  So hard, that I simply didn’t want to go on. I walked/shuffled a few more miles, before the inner voices got the best of me, and at an aid station at mile 18, I sat down on the curb and started crying.  I wanted to quit, pretty badly.  But I refused to walk up to any volunteers and say “hey, I’m done”, so instead I waited for them to come to me, and offer me an out.  It never happened.  I was a mere 6 feet from a tent full of volunteers, but no one even acknowledged my presence.  After about 5 minutes of being ignored, I got up, and kept running. And while I certainly didn’t completely recover from that “wall”, I actually started having fun again. It would be my slowest marathon ever,  I finished that damn race, with a smile on my face. 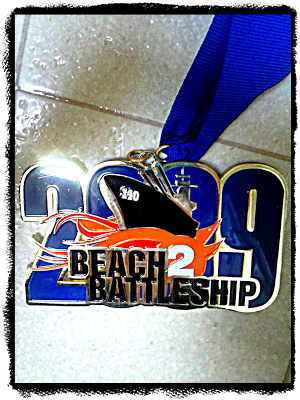 Iron Girl 2011, my first open water triathlon. I honestly thought I was going to die in that lake.  Every single kayak and buoy I passed, I internally told myself “well, you did it now, you are going to drown.  Should have stopped when you had the chance.”  When I shockingly survived the 0.62 mile swim, I then faced my next fear(s):  a) my road bike that I didn’t know how to use, b) riding on hills, and c) riding DOWN hills in the pouring rain.  Once again, I finished that damn race, with a smile on my face. 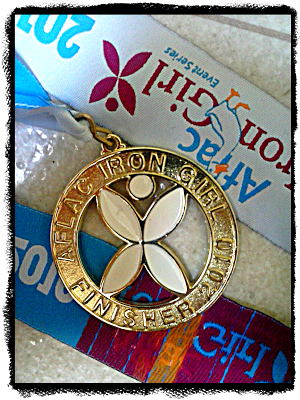 2005 Myrtle Beach Half Marathon.  There is no official race report for this one, for this was long before my days of blogging, or even thinking I would ever enjoy (nor even want to enjoy) running. The short version (click here for a longer one): my sister asked me to run a half marathon.  Sure I said…and then forgot about it. 4 months later, it was half marathon day. I didn’t train.  Hell I didn’t even run.  But I laced up my 3 year old sneakers and gave it my best shot.  I finished.  I couldn’t walk for about two weeks after that, but I finished.  And I was given this simple finishers medal, which I hung from my wall and stared at every day. I was so proud of that little medal, and the fact that I ran (well, traversed) 13.1 MILES.  That was huge! I craved more. It would be two more years before I truly dove into my running career, but I still cherish this medal, for it represents the beginning of a sport that has truly changed my life. 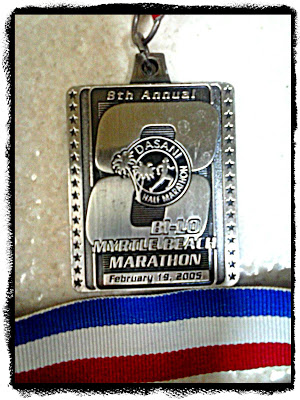 I could go on and on, but I suppose at some point today I should get work done and go for a run.  The point is, almost every single medal I pulled down conjured up memories of overcoming challenges, meeting new friends, and doing what I love to do: run.  Yes, most were earned during a dark point in my life, but did they represent the dark point in my life?

The more I thought about it, the more I realize that I couldn’t get rid of these medals.  Even though these are simply material items, and while not possessing them certainly wouldn’t negate my accomplishments, they are still representative of MY accomplishments.

And pretty kickass ones at that.

So I took the medals down from the wall, dusted them off, and carefully packed them up.  One day I hope to have a big office in my home, or an empty wall in need of some color, where I can display each one of these medals.  For just like photographs hanging on the wall, each one has a story to tell.

Moral of the story: this is another prime example of how YOU CHOOSE how you let things and people affect your life. Change your mindset and you will change your life.

I want to hear your thoughts on finisher’s medals: overrated or priceless? What do you do with yours?