WOW what a weekend at the Survivor Harbor 7 race in Baltimore, MD! I’m going to spare my brain from reliving last night’s drive by blogging about it, but let’s just say it involves an 11 hour trip that should have taken 7 hours, a lost debit card, western union and some “5 hour energy”, which, by the way, does EVERYTHING they claim. No jitters, very focused and wide awake, and no crash at the end (well, I crashed in bed after 3 hours, so maybe that wasn’t a valid test, haha) . Wow wow wow. Glad to be home! 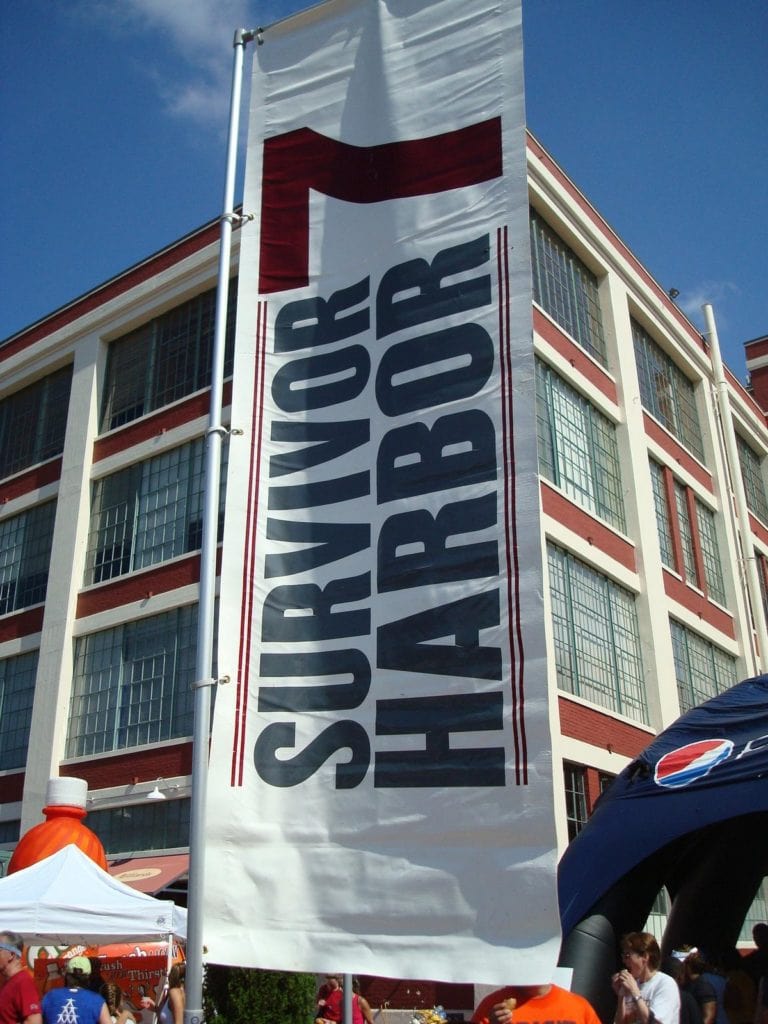 ANYWAY. I arrived in D.C. on Saturday afternoon, and after a bit of rest Holly and I drove up to Baltimore. We met up with Team Cancer to 5k and had a wonderful dinner at the Hilton Garden Inn where we were staying. Pasta, pasta, and more pasta. Can’t beat it! In our hotel room that night, Holly enlisted my arts and crafts help in making medals for our Cancer to 5k runners. Holly gave me all the pieces, and I assembled and sewn. I was pretty proud of our handy work, and we knew our participants would be surprised! 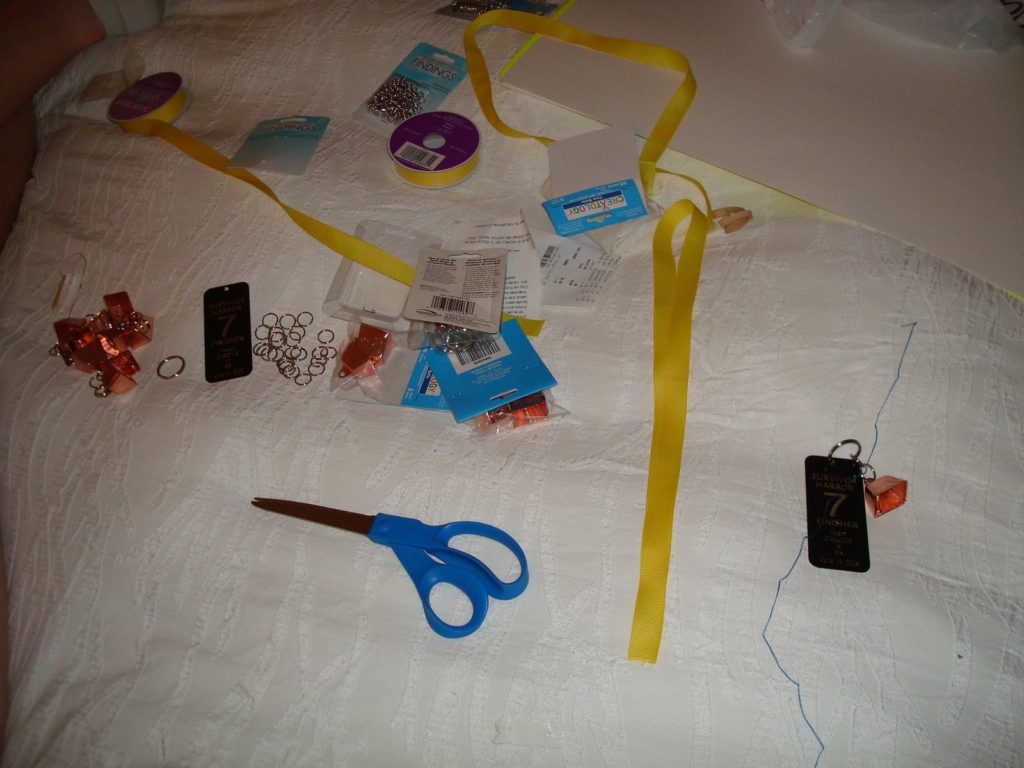 That night, I was *thrilled* to sleep in a big comfy bed, all to myself, all alone, no babies, no toddlers, no one to wake me up. But sure enough, after about 3 hours of sleep I was startled awake by…the silence. haha! My body just didn’t know what to do with itself! The 5:15 wake up call came before I knew it, and we were up and off to the finish line of the Survivor Harbor 7 race to set up Cancer to 5k’s tent.

The Cancer to 5k program, for those of you new to my blog, is a free 12-week training program designed to introduce and/or reintroduce cancer survivors to physical activity by providing them with the training program, coaches, encouragement and support necessary to complete a 5K (3.1 miles) distance road race. (read more about it here: http://www.cancerto5k.org/ ) Over the last 4 seasons, some participants have started training for even longer race distances. Today, we would have some 4 mile runners and some 7 mile runners. On race day, volunteers run as “Sherpas” with the cancer survivors, to basically help them out in anyway they need. Keep the pace, keep the enthusiasm, you name it: just get the survivor to the finish line!

I would be pacing a great guy named Denny , who would be running 7 miles for the first time ever. Not even in training had he covered a full 7 miles. I was very excited to be able to be a part of the team! After helping Holly unload a few things under the tent, I had to take off with the rest of the team and hop on the shuttle bus to the starting line. At the start I was – I can’t believe it – COLD! About 500 miles north was the difference between night and day as far as humidity levels are concerned, wow!! Believe me, after the weather we’ve had in SC, I was happy to be cold ! 🙂 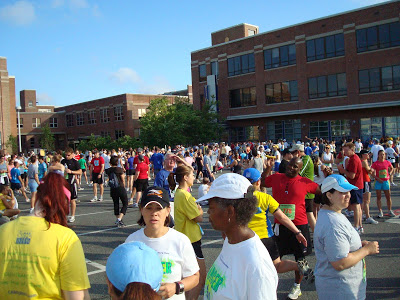 The run itself was a lot of fun. I’ve never really had a chance to explore Baltimore, so this race was almost like a sight seeing tour for me! I’m glad I decided to run with a camera!

Denny’s “happy pace” was around an 11:30/mile. So I set coach Garmin to beep at me if we started going too fast, and Denny, his other Sherpa Colleen, and I took off. 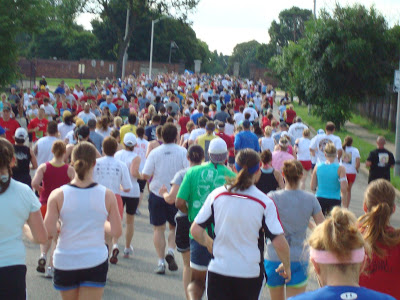 Going over the bridge to the turn around 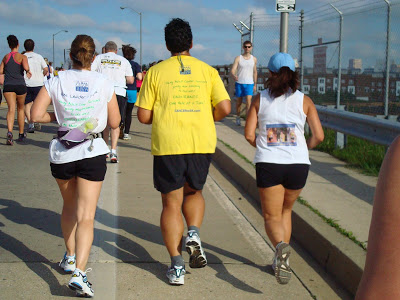 Ben and his Sherpas, Cat and Monica 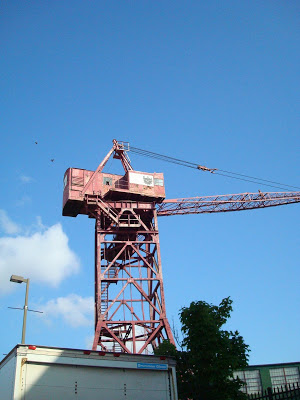 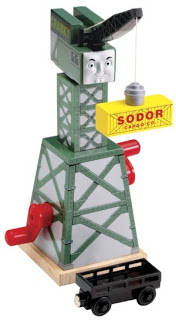 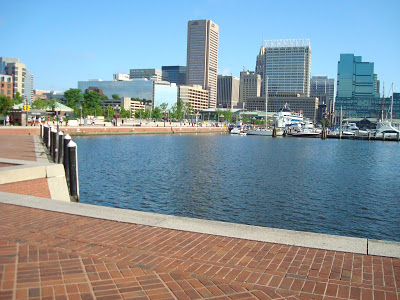 running through the Harbor area 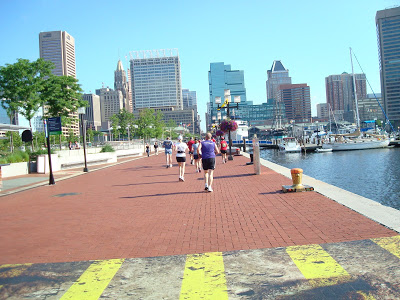 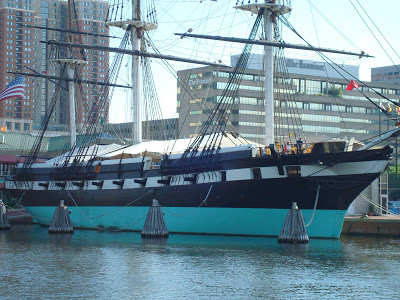 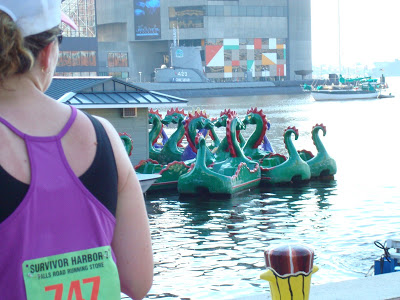 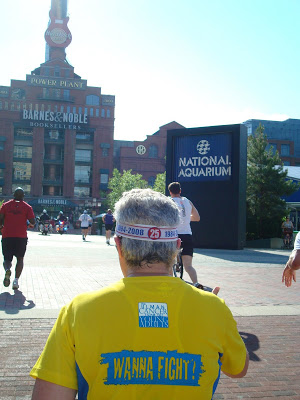 I didn’t get this woman’s name, but she is a fellow TEAM FIGHT member. We kept going back and forth passing her and chatting with her. At one point , near the 6 mile mark, it was starting to get hot and I could tell she was pushing herself, and we told her, don’t worry we will ALL make it to the finish line. She yelled out: “THIS! IS! EASIER! THAN! CHEMO!!!! ” It was awesome.

The whole race we held Denny back at a 11:00-11:30/mile pace so he wouldn’t crash and burn. As we turned the corner, about 3/10ths’ of a mile from the finish (and all downhill) I told him he could turn on the jets, as we were almost there. And he certainly did! As we rounded the last turn, about 20 yards from the finish, he took off sprinting! I couldn’t even keep up, never mind take a picture of him finishing! So this post race finish line picture will have to suffice. 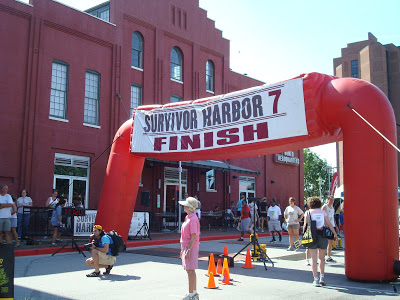 Denny made a comment, during the last mile, about how this race gave Baltimore a whole new meaning for him. Before, it had been a place of doctors and hospital visits all regarding his cancer. Now, it was a place where he accomplished something huge-he just ran 7 miles, the longest run he had EVER done. Congratulations Denny, you did it! And congratulations to ALL of the Cancer to 5k survivors and volunteers!! Another successful race! 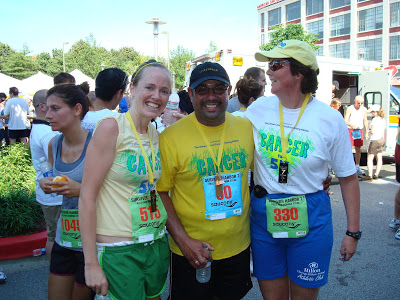 Me, Denny, and Colleen after the race 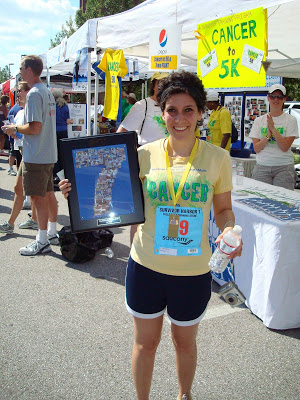 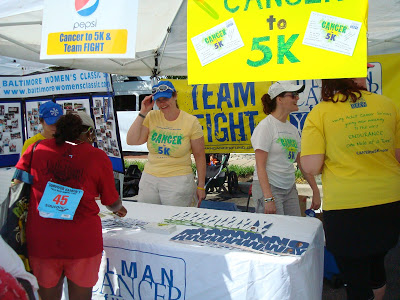 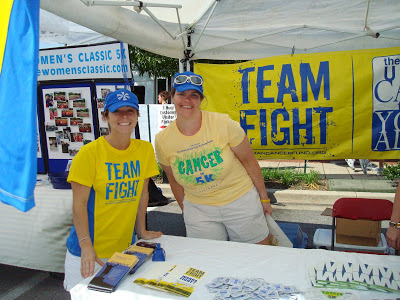 Lindsey from the Ulman Cancer Fund, and Holly 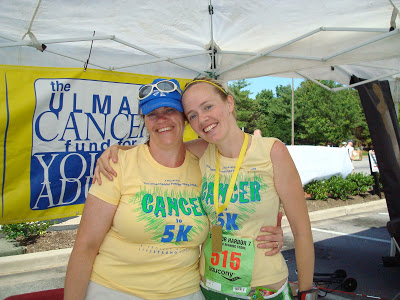 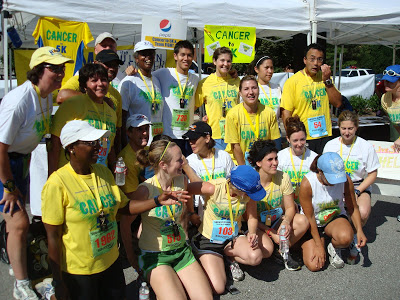 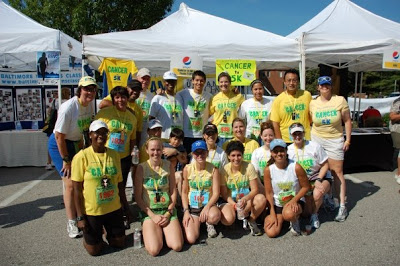 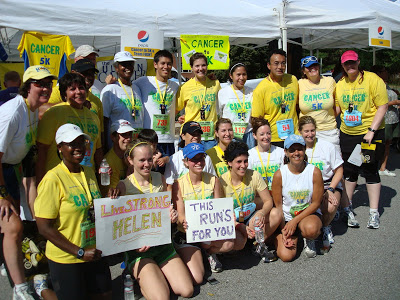 Running in support of Helen, a past participant who is still fighting the cancer fight 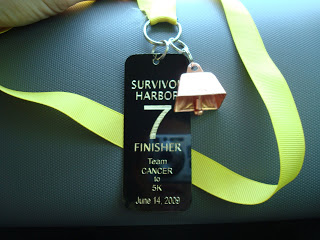 Ta Da! The medals! We are a crafty lot 🙂

Overall this was an amazing experience. If you ever get the chance to pace a race for someone, whether it be a friend, stranger, or group, DO IT! It gave me a whole new perspective on running. It wasn’t all about *me* for once. It was about someone else, who also had goals they wanted to reach. And it reminded me that it’s not about how fast or slow you are, it’s about how far you’ve come to get to where you want to be! Congratulations, Cancer to 5k! Look how far you’ve come!