Hear me now: I AM A TRIATHLETE!! 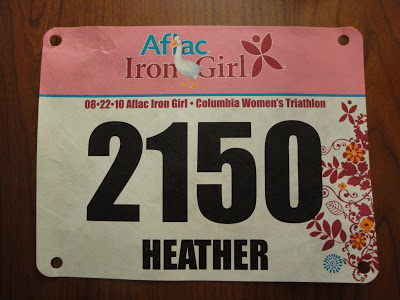 OK, I know *technically* I’ve done a triathlon before, but that race was nothing compared to yesterday’s Iron Girl (Columbia MD). While probably not nearly as painful, yesterday was certainly equally if not more challenging as my first marathon, and I absolutely felt more pride than I’ve ever felt at a race as I crossed that finish line.

Saturday consisted of driving to Columbia, going to the expo (met Sarah Reinersten, she was so nice!) getting my bike inspected and racked, the Team Fight lunch, and sleep. Somewhere in there Holly gave me the layout of the land, and I got to eyeball exactly how long that swim would be! 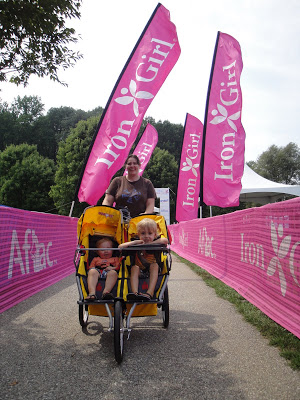 Check out all of the great shwag! Everything but the visor and the kid’s t-shirt came in the packet. Love it! 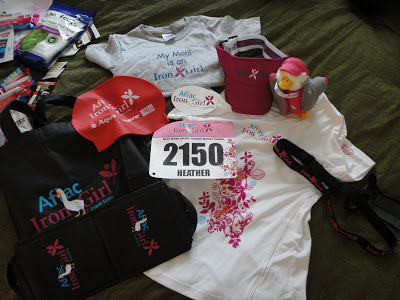 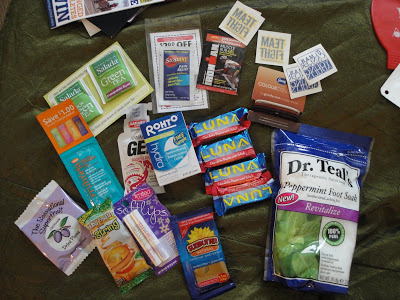 Sunday morning, we woke up at 4:00 am. This was no problem for me, as I woke up probably every hour the night before, but Kain and Rowen were less than thrilled with the early wake up call. Rowen simply refused to be bothered, and just yelled every time we pulled the blanket off him, and Kain didn’t know what to do. Sit up, lay down, sit up, lay down, or just cry. Poor kids.
We picked up fellow Team Fighter Jess and drove to the race site. The traffic was CRAZY , but eventually we were parked. I handed the kids off to Aunt Holly, who graciously gave up her race day (she was registered for Iron Girl as well) to watch them for me so I could race (original plans did not include the tots), and Jess and I headed into transition.
I set up my stuff, and stared at it forever. I felt like I was forgetting something. (I wasn’t). We then got body marked, and walked to the Team Fight tent to hang out for the next 2 hours. 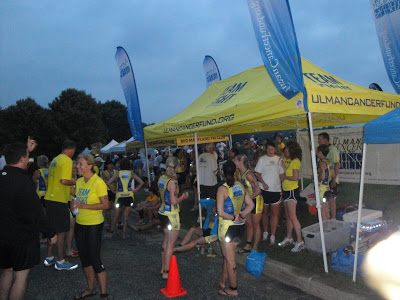 Oh it was a long wait. I passed a good 40 of those minutes waiting in a porta-potty line. Gotta love a race with a bunch of chicks, the lines were ridiculous! We watched the pros/elites start the race, and that’s when the nerves hit. 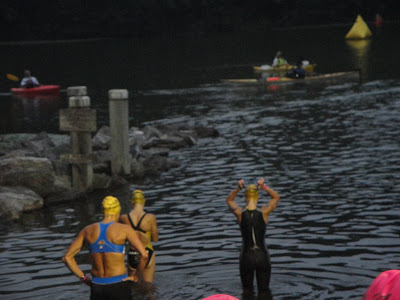 I was a nervous wreck as is, but when daylight came, the sun was M.I.A., and instead the sky opened up and started raining, I wanted to cry. This was not the race day I was expecting. But it was what it was, and when 7:40 rolled around, I headed out in the rain and down with the rest of my wave to wait for our swim start. Here goes nothing.
Swim: 0.62 miles (1,092 yards) open water swim. 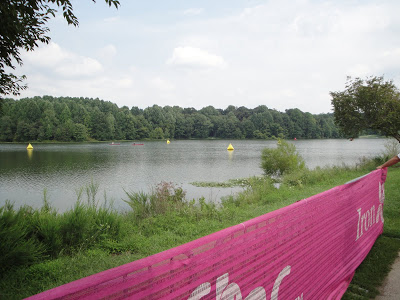 (that picture just shows a fraction of the swim!) As I’ve mentioned in previous posts, this was to be my first open water swim. I wasn’t nervous about being in open water, but I was nervous about swimming with gobs of other people. So as suggested I got in at the very back of my wave of 183 ladies aged 25-29. It was such a large wave that there was no time to even tread water, as I was still in waist /chest deep water when they said “GO”.

I waited a few seconds for everyone to move forward…and they didn’t. It felt like minutes before I could actually swim. And then, it seemed all of the people ahead of me were swimming at a snails pace. I took a few strokes and landed right on top of someone. The water was so dark and murky you couldn’t even see your finger tips ahead of you, never mind another swimmer. I looked up and was smack in the middle of the pack. What the heck. I am not a good swimmer, why was everyone taking so long to go? That brief second of pausing to think caused me to be run over by a few more swimmers. But I had no where to go. 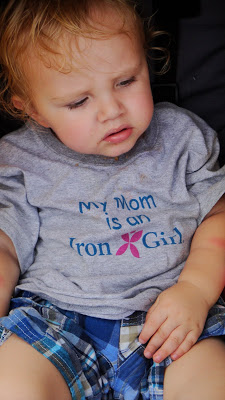 I smiled big for my finishers picture (here’s hoping it comes out well, that’s usually a shot in the dark.) and then nearly burst into happy tears at the finish line.
2:31:52 total finishing time. 135/183 age group and 1206/1769 overall. I’m so used to being in the top quarter or faster of my races, but I could have been dead last place in this one and I’d still be thrilled. I overcame so many fears to get to this point. I remember a time when I never thought I could even BE a triathlete because I couldn’t swim very well, never mind swim in a race. I remember very recently a time when I couldn’t even ride my bike around the parking lot without being able to clip in and out. And now I’ve done it (again). And I realize there is so much room for improvement, and I can’t wait to continue this journey.
I’m just thrilled. I’m sure I have so much more to say in the coming days. Right now my head/neck feels like I have the flu. No, not because I actually do, but because I’m pretty sure I tore up every muscle in my neck/shoulders during that swim. Note to self: learn how to and practice sighting.
More pictures and more stories to come. For now, I’m basking in post triathlon glow 🙂 Thanks for all of your well wishes and support!! 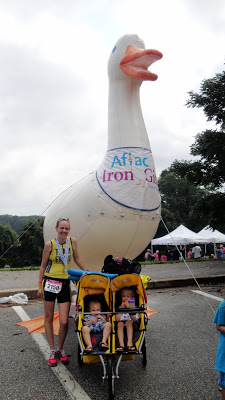 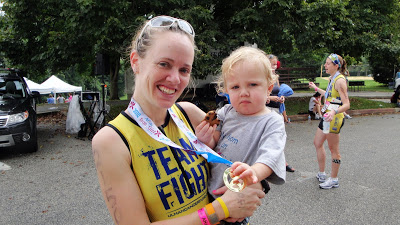 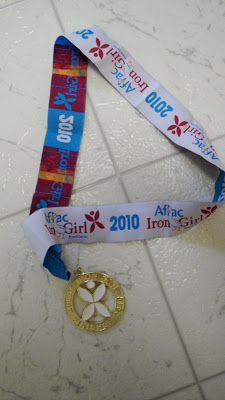 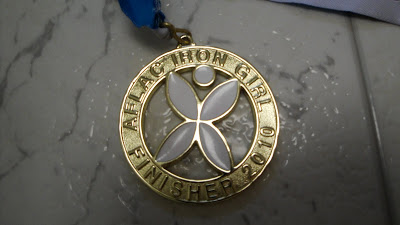