Shamefully, I fell so behind on my shoe reviews, that I’m officially one model release behind on this particular shoe (the Lone Peak 2.5 was recently released)…

…but I’m going to review it anyway, because I REALLY like this shoe.  And because even though there are COUNTLESS reviews on the great world wide web about this shoe already, I’ve got to add my two cents.

Many of my shoe reviews are sponsored, many are not.  But whether the shoes showed up at my doorstep for the sole purpose of a review, or if they showed up because my credit card and need for a specific shoe requested them to do so, my opinions and thoughts are always 100% honest and never swayed by how much I acquired said shoes.   I preface this post with that disclaimer because of the nature of how I came to own these shoes (I bought them).

You see, Geoff and I planned to run a ridiculous ultra marathon in the middle-of-nowhere-Vermont (The Endurance Society’s Infinitus), and I realized I didn’t have the right shoes for this kind of event.   Anyone who knows me knows that at times, my running shoe collection is somewhat out of control.  I’m like a gearhead with a garage full of tools: I need specific shoes for specific reasons.  First world running problems (and blessings!)  What I needed…and wanted…was a light weight trail shoe with exceptional ground feel, yet I also needed something rugged enough for the terrain AND cushioned enough to sustain me for what I had hoped would be 100 miles.   I also wanted something that would help rpomote a natural foot pattern and toe splay, as well as accommodate potential swelling that accompanies running for a really, really long time. 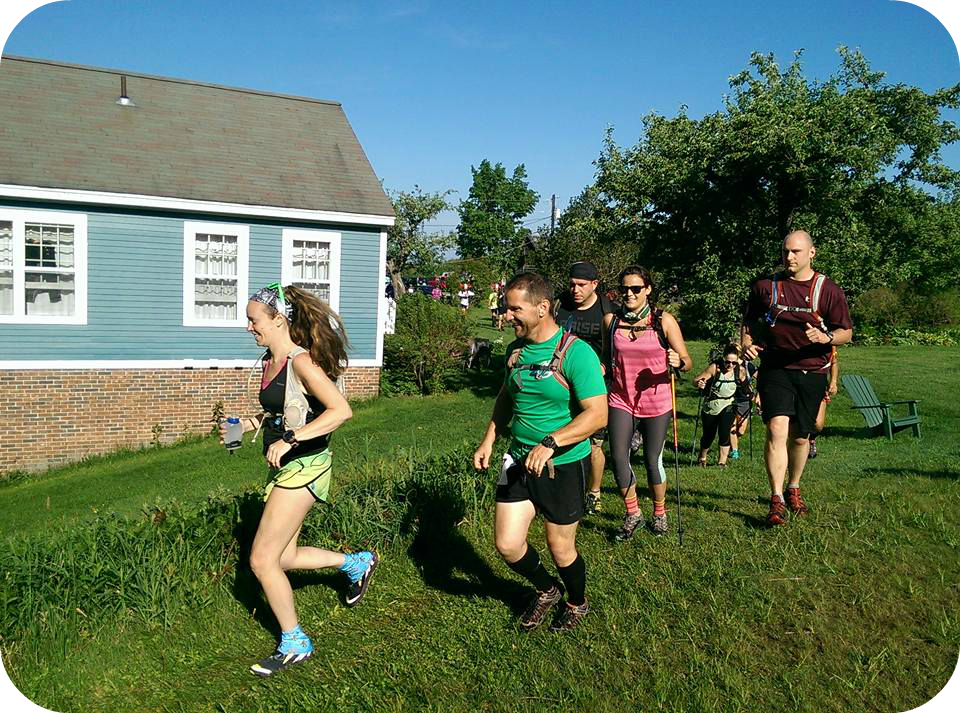 Altra Lone Peaks on my feet, about one full minute into the 2015 INFINITUS ultra marathon.

My first thought went to Altra, a brand that is relatively new (comparatively)  but wildly popular in the trail running community.  Altra makes a zero drop shoe in varying cushion stack heights, so you can get the best of both worlds, more natural running AND cushion.  Further the toe box is wider and more anatomically correct, and the women’s version of their shoes is built on a completely different last than the men’s shoe; they are truly gender specific. I have had the opportunity to run in the Altra Intuition 1.5, and have basically run them into the ground a few years later.  I also new an ultra running friend, let’s call him Cougar, who was always raving about (and wearing) his original Lone Peaks.  So I did what anyone does in 2015, and took to the internet for reviews.

Now, that might go down as the longest introduction to a shoe review I’ve ever written… 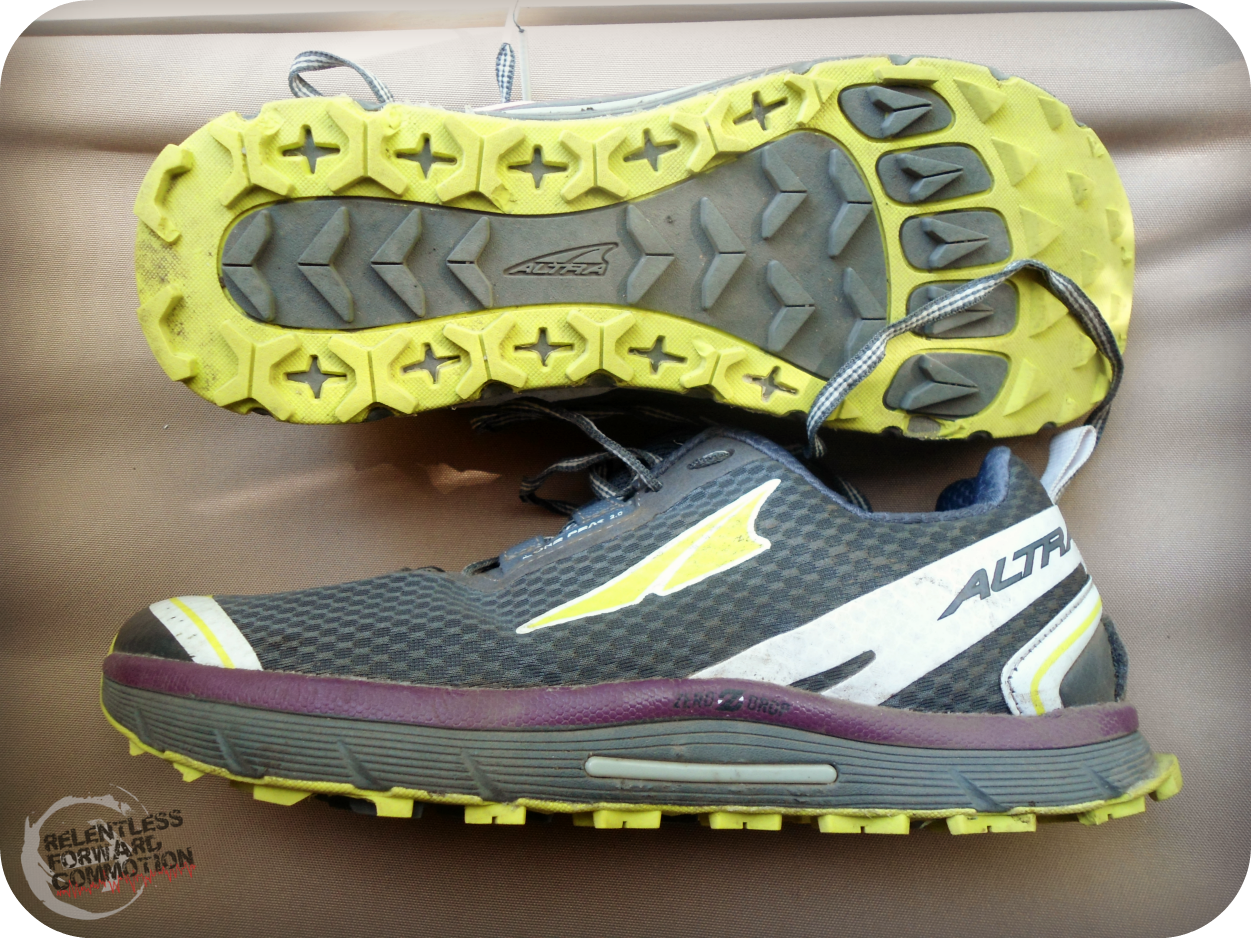 I forgot to take pictures before use, so, excuse the Vermont dirt and grit. 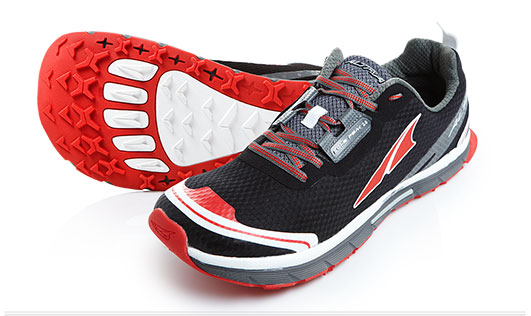 Fit:  The Altra Lone Peak 2.0 runs SMALL.  I hesitantly heeded this warning and ordered up a half a size (normally a 10, I ordered a 10.5 for the first time in my life) and was very glad I did.

Awesome feature: Gaiter traps.  These genius idea should be an option for all trail shoes.  While gaiters aren’t necessary for every run, when you need them, you need them to STAY IN PLACE.  And through thick mud, puddles, and technical terrain, the Lone Peak Gaiter traps held my gaiters in place, without any need for readjustment (refer back to the first picture in this post for a view of my awesome Bigfoot gaiters.  As in, they had Bigfoot on them, and also as in my feet are really big.) 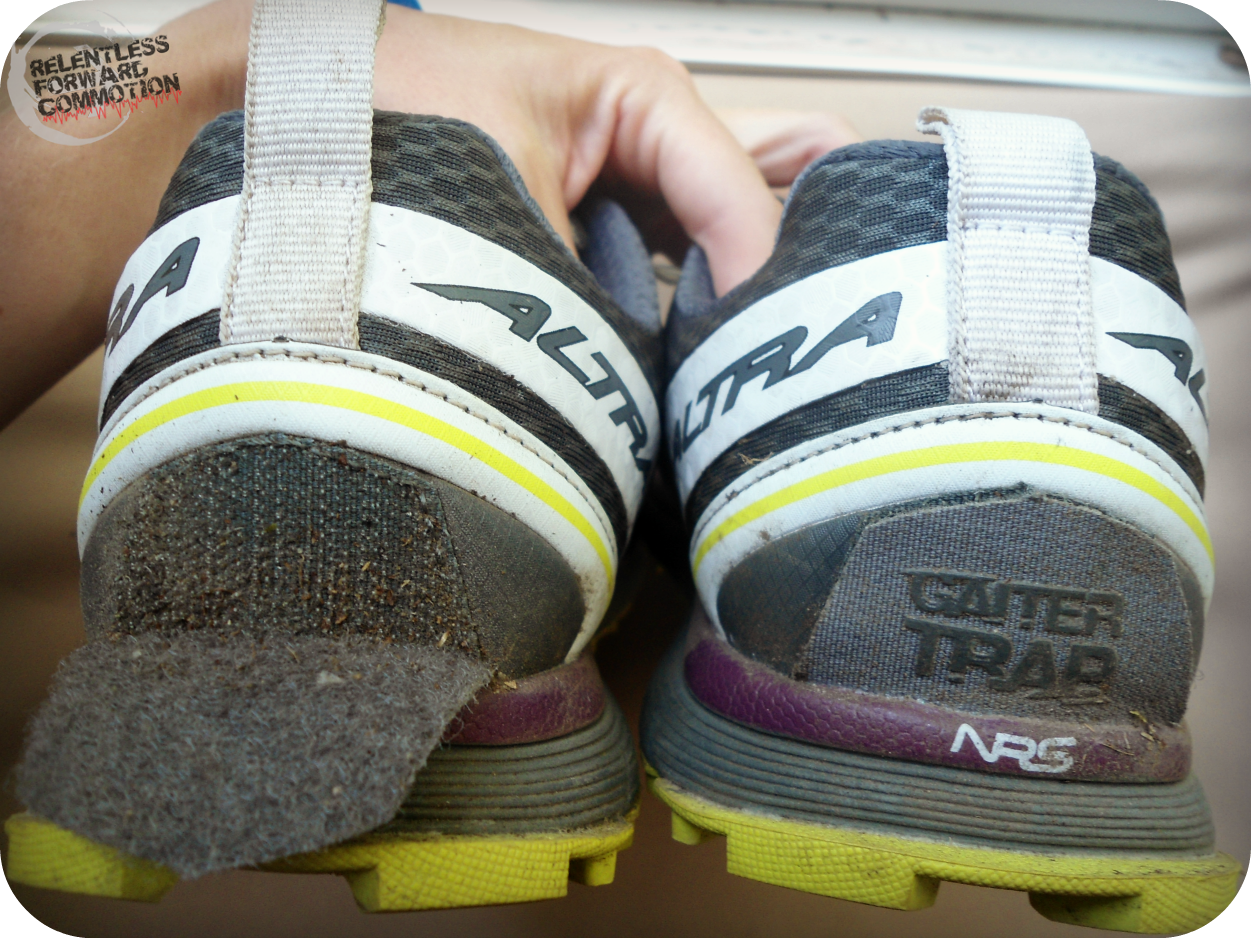 Run: Simply amazing.  While the first few runs I put in on these shoes were short training runs, I put them to the test with the aforementioned ultra.  It was a risky move to put multiple double digit miles on a relatively new pair of shoes, but I was not disappointed.  No hot spots, no slipping laces, no issues whatsoever.

The Lone Peak 2.0’s have so much cushion, yet the natural feel and foot strike I’ve come to expect with a zero heel to toe drop and wide forefoot.  The upper and heel cup is wonderfully cushioned which was appreciated over the longer distances of the ultra.   At 8.5 ounces and a 26 mm stack height, this shoe was slightly heavier than I was used to, but I feel the extra “bulk” acted as protection against the elements…namely all of the rocks and roots.  I probably would have wanted a little less “shoe” for a shorter distance run (half marathon or less) such as the Altra Superior (I’ve yet to try them, but have heard good things), but for a marathon or longer, the cushioned ride was incredibly welcomed.

The aggressive tread was more than enough to help me trek steep and sometimes wet climbs through the Vermont mountains.   Yet the sole was still flexible enough that I didn’t feel like I was running in clunky hiking boots (as many trail shoes can feel). 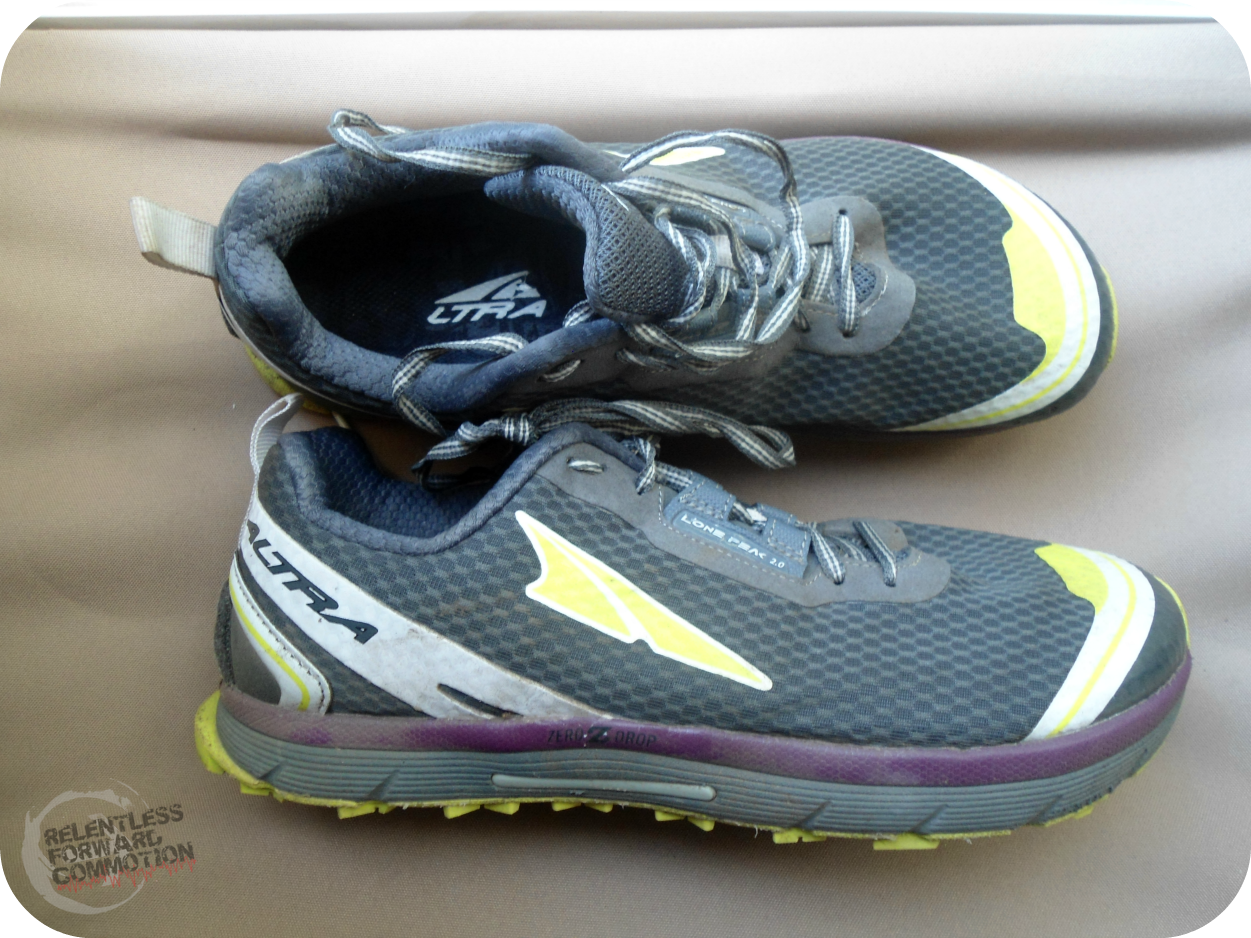 It appears in the newer version, the Lone Peak 2.5, Altra has redesigned the shoe upper, improved the lacing system, improved upper durability, and created a slightly firmer midsole.  None of these improvements were factors that I had issues with, however, as initially mentioned, I never ran in the original Lone Peak so I truly have nothing to compare it to.

The only issue I experienced was that the Altra Lone Peak 2.0 did NOT drain well.  The race directors of Infinitus purposefully sent us through some gnarly swamps and of course the traditional stream crossing, so my feet were very wet…and they didn’t dry.  This was the main reason I switched my shoes from the Altra’s to another pair at the halfway point.  No one loves trench foot. 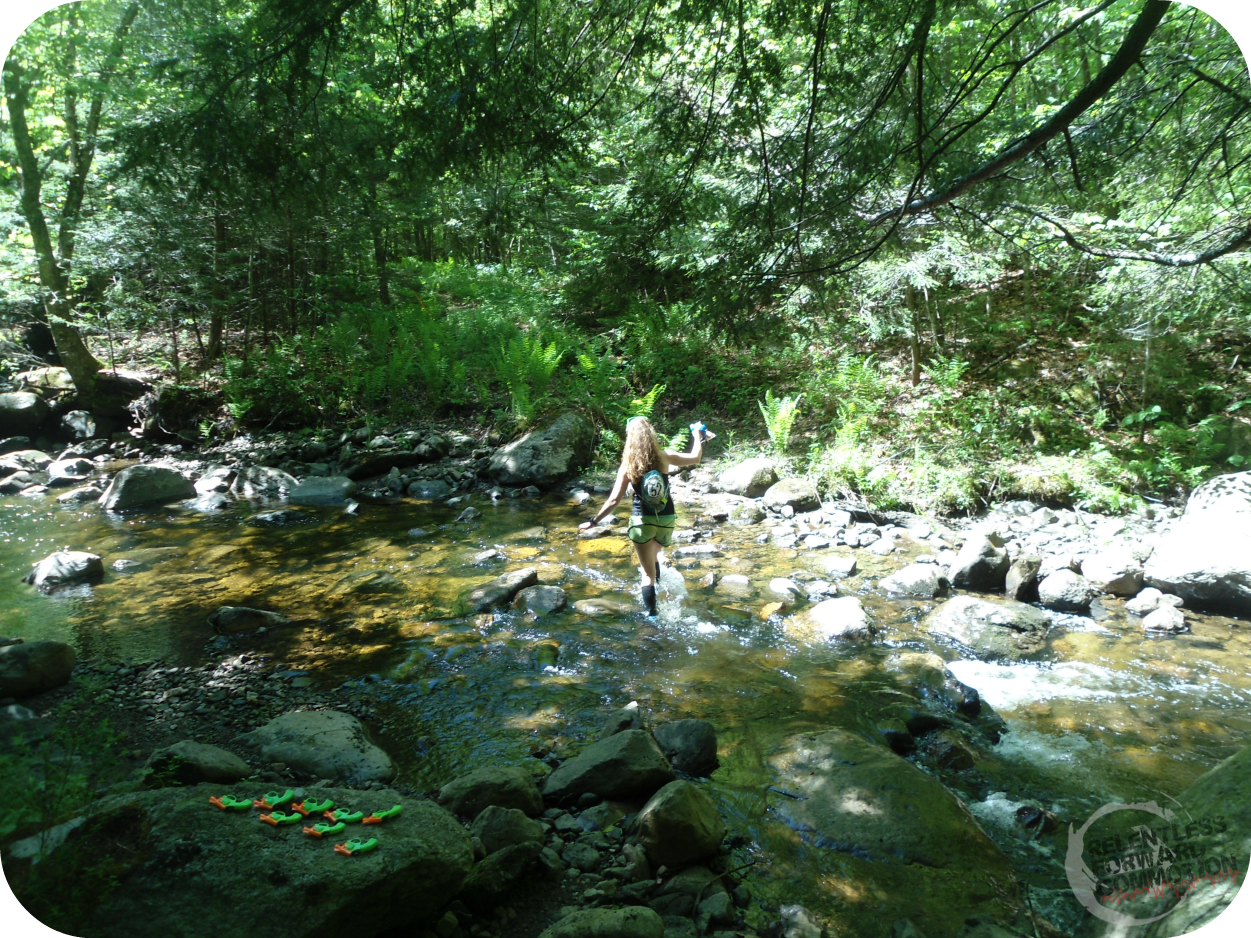 So, there you have it, the review of a shoe that has already been outdated and placed on the clearance shelf.  For me, I’ll run these shoes into the ground, as they are a comfortable, quality trail shoe that have all of the features I look for in an off road shoe.   I have, and will continue to, recommend these shoes to others…

…until I try the Lone Peak 2.5’s and possibly love them more.  Stay tuned…