Back in February, I went on my very first New Hampshire hike (well, first since high school/the big move back.) A friend and I hiked up Pack Mountain in Peterborough, NH. Though it hadn’t snowed in days…or much at all this winter… the trail was covered in ice (probably because it was about 17 degrees that morning).  We slipped and lost footing more times than I can remember as we hiked up that trail to the summit. When it was time to come back down, instead of taking the trail and possibly breaking bones, we decided to play it safe and walk down the paved access road. (well safe-er, the road was icy too).  As we jogged, because it was so steep it was hard to just walk, down the switchback road, I made a comment along the lines of how this would be an INSANE training run, to try and run straight up this access road.

And a few weeks later, I found it:  the Pack Monadnock Ten Miler.  Ranked as one of the seven most severe summit races, this race includes a 1824 foot elevation gain and is part of the USATF mountain racing series.  While the average grade is only 4 percent,  the last 1.3-miles (the aforementioned access road) averages more than 11 percent, and the punishing final climb has sections over 20 percent.

As my screaming hip flexors, quads, and calves will assure you: the hills did not disappoint.

Yesterday morning I drove myself to the Wilton/Lnydeborough High School, where registration and packet pickup was taking place.  Nothing fancy, just a bib and a t shirt with the logo on the front and “GOT HILLS?” in big red letters on the back. It made me laugh, and then made me nervous for what was to come.

Because this was a point to point race, I got back into my car and drove to the finish parking area, then hopped in a mini van with a bunch of other runners to shuttle back to the high school/start.  The other runners had all run this race before, and were telling me how this was a part of a local series of 6 races: run all six and you can bypass the lottery and get automatic entry to the Mt. Washington Road Race (their motto? “Only One Hill”. ha!)  Note to self: next year I’m doing that, for sure. Glutton for punishment, I swear.   We got to the start, which had the great feel of a small, local race in beautiful Wilton, NH, yet there were many, many runners in their team singlets who had the “I’m here to win” look on their face. If the look wasn’t enough confirmation, the fact that the lead pack took off and SPRINTED up the hill after the gun went off was.

So as it turns out, I was woefully unprepared for this race, both from a physical point of view and a strategical point of view. Looking back however, I think it’s one of those races that you just have to experience the first time, then come up with a plan for next year.  I didn’t warm up. I considered the 1/3 mile walk from the school parking lot to the start line adequate.  I was wrong.   The first mile of the race was uphill.   For the first time in my LIFE I had to stop and walk, 0.75 miles into the race.  I was humbled.  Thankfully, for both me and my ego, I was not the only one.

Once I got warmed up, I really, REALLY enjoyed the first half of this race. It was hilly, no doubt about it, but the uphills were evenly paired with downhills. I LOVE downhills. My gazelle legs give me some mega speed on the downhills, and this is where I take down my competition one by one.  Yes, I started this race as “just a training run”.  The more hills I can tackle prior to the Ultra Beast the better.  But when I got there, and saw how very little of the field was female (I think about 25% females), I realized that maybe, just perhaps, I could take an age group place if I tried.  Especially since many of them chose to start way in the back of the pack. I can not for the life of my shut up my competitive side, and after I really started rolling, I tried picking off other ladies one by one.  I only let two pass me, including one really amazing older (not old, just older) woman probably in her 50’s around mile 6. She told me she had been chasing me all 6 miles, and to keep up the good work. I smiled and thought I hope I can be that kick a$$ and strong as her over the years to come. 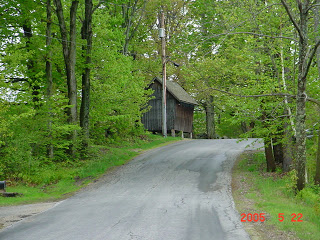 The weather was perfect for a race.  Overcast, had rained earlier so everything was cool, yet the rain had stopped by race time.  And this course was GORGEOUS.  It alternated between very rural paved roads and nicely packed dirt roads. We ran past streams, waterfalls, farms, goats, and many a horse.

As I’ve mentioned many times before, my blood sugar does CRAZY things during a run.  It took me years to find and perfect it, but now for anything past an hour I have  taken to the “running buffet”.  Typically it consists of a half a shot block, one honey stinger, or anything equivalent, around 15 ish calories, every mile (or about 8 ish minutes).  However, I forgot my snacks that morning, and in a panic, stopped at a local gas station, and grabbed some swedish fish and a 5 hour energy.  It wasn’t ideal, as the fish were way harder to chew mid run, but it did the trick in getting a quick burst of sugar to my blood stream.

Somewhere around mile 6 my legs just died.  The constant overall uphill combined with my lack of training over the last few weeks was really showing.  This was when I had to dig deep in the mental strength vault and try to ignore the total feeling of fatigue in my quads. Just keep digging. I don’t typically race with music/and ipod, but I’m glad I did this time.  Jay-Z and Kanye helped pull me through.

At mile 8 we left the back roads and came out on Rt 101 and began a 1/2 mile + of a steep incline. I just took it cone by cone. I kept telling myself, make it to the next cone, and you can walk for a few seconds.  It was hard, but not horrible.  I used the countless passing cars to distract me, as most people were smiling and waving at us.  That always gives you a mental boost.

But I knew the worst was yet to come.

Just before mile 9, we took a right into Miller State Park to begin the 1.3 mile climb up Pack Mountain.  Or, this: 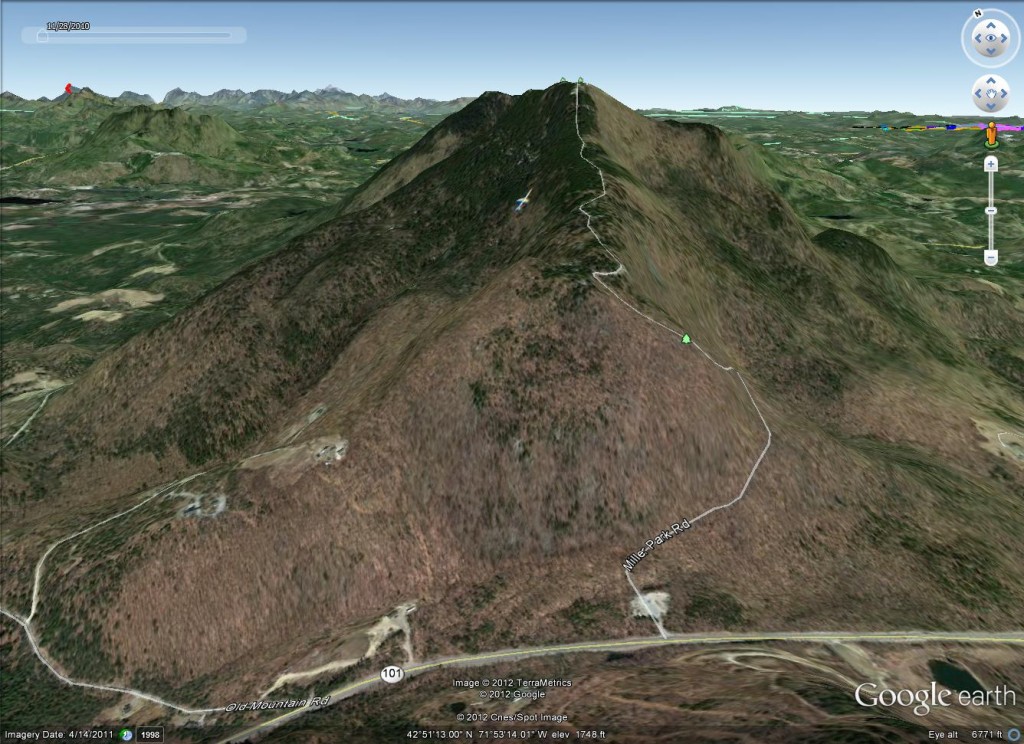 As I mentioned, I had been ON this road before, but I honestly had no idea what it would be like to run it…on already trashed legs and depleted glycogen stores.  At the bottom of the hill the clock read 1:17.  This meant despite the walking I had already done, I was maintaining a mid 8:xx/mile pace.   However, Pack Mountain was about to demolish that.

It took me another 18 minutes to get to the top of the mountain, just over a mile.  I ran when I could, which was not often.  The switchbacks were ridiculous and almost impossible to run up.  I have to give a huge THANK YOU to the chick who was behind me. If it wasn’t for her, I probably would have walked a little more. But every time I would see her start closing the gap on me (we couldn’t have been more than 20 yards apart) I would dig deep and run.  I’d run for, oh, maybe, MAYBE 50 yards until my legs and lungs were screaming. I can’t even begin to describe how hard it was at this point, but I could not let her pass me.  There were times where walking fast left me gasping for air and literally holding my quads with my hands.

Luckily, I wasn’t the only one.    I actually passed many a fit looking man at this point. Thank you again, long gazelle legs.  Finally, when I thought I couldn’t go any further, I saw the tower marking the peak was near.  We took a sharp turn to the right, and like an angel in the darkness, there they were: timing chip mats. Hallelujah. I sprinted (well that’s a lie, I just ran, a basic run was all I had left in me by then) over the mats.  1:35:16. I honestly had NO idea what to expect, so yeah, that’s just fine with me.

Because none of the trucks could make it to the top of the mountain, we had to all walk back down that ridiculous climb to join in on the post race festivities (i.e. snacks) at the bottom of the mountain.  While not nearly as painful as the run UP, the walk down was far from comfortable on my sore legs.  At the bottom, I grabbed some Doritos, which never taste as good as they do past a really hard run, and then headed over to the guy who announced he had age group awards, and if we thought we might have placed, we should check in. So I thought, what the heck, I’ll check.  It was really hard to know who was in front of you in this race, and I honestly had no idea.

So I was super stoked when he said “Heather Gannoe, yes, third place age 30-39!”.  My prize? Maple Syrup from Bens Sugar Shack, a farm we passed on the race course!  You know i’m a “bling wh*re”, but I thought this was a really quaint and awesome award to receive for my first “really close to home” race since I moved to NH. Of course, as soon as I got home and showed my kids, the first thing out of their mouths wasn’t “congrats mom!” it was “oooh I want some waffles!”.  Oye.

If you are in the New England area, and looking for a challenging race as opposed to just another local 5k through the neighborhood, this is it.  Despite being very small (202 finishers) the organization on this race was A+.  Three perfectly run water stops, registration/packet pickup was flawless, and even REAL, indoor, clean bathrooms at the start (who doesn’t love that?).  The volunteers were friendly and helpful, the race director promptly replied to all of my emails/questions.  And of course, it’s just  a ridiculously challenging course.

I’ll be back next year, for sure.  But until then, I have found a “hill” I may have to tackle a time or two again this summer before the Ultra Beast….anyone want to join me ?  😉