I should be writing wedding vows, but I’m writing a blog post instead.   I am certain none of you are surprised.

I can’t remember when Facebook released the “on this day” app, but I for one would like to thank Mark Zuckerberg and his cohorts for it.  I find it ever so entertaining to look back on exactly what I was doing, racing, or simply blabbering about anywhere from one to 8 years ago (when I first joined the FB) on this exact day.  It’s like my very own digital time capsule.

I thought long and hard about even posting this, because I’ve come to a point where I’ve truly let it all go and not wanted to bring up my past anymore.  But the coincidence has not been lost on me that 5 years ago this month, I was in a very bad, very dark place.   Facebook has been reminding me of this daily for the past few weeks, with very sad, very vague status updates written during that time staring back at me from the computer screen.  I remember talking with a friend via Facebook messenger around this time 5 years ago, a friend I barely knew, and confessing to him that I wasn’t sure how anyone would or ever could want to be in a relationship with me again.

And not just your average carry on baggage, but the checked kind that comes with a $150 extra fee because it far exceeds the allowed weight limit.   Serious baggage.  The rug of my very existence, everything I had known as an adult, had been pulled out from under my feet. I was lost. Confused.  I had two toddlers that had destroyed my body physically.  And though it was vain, I felt used.  I felt washed up.  I felt unattractive.  Unwanted.  And on a very visceral and painful level, I feared no man would ever love me again.

The irony here being that five years ago today, I didn’t realize I had never actually experienced true love in the first place.

Over the next 8 months I grasped at failed and false relationships, hoping to fill the empty void that was consuming me.  In retrospect it turns out that I needed those bumps in the road, because they helped me to eventually realize the only one who could fill that void was myself.

I had to love myself.

And I had only barely begun my journey into self acceptance when you stumbled into the picture.  Honestly, your timing could not have been worse.  Plus, as anyone who has heard the story already knows, I didn’t even like you when we first met.

In fact, you were kind of an asshole.

But, when you invited me out kayaking a few days later, and I had nothing else going on, I figured a little outdoor adventure couldn’t hurt anything…the fresh air would be good for me.   And in a strange twist of fate, deciding to go kayaking with the asshole might have been one of the best decisions I have ever made in my entire life.  I’m infinitely glad that I heeded to the call of adventure (and let’s be real, the Jägermeister)  that day.

Because today, I simply cannot imagine my world without you in it.  What’s more, I don’t want to.

It’s funny, sitting here now trying to reminisce about the last four and a half years, because with  a few exceptions that are seemingly just a tiny blip on the radar, it all seems like one big blur of happiness, love, and laughter.

And cat fur.  So much cat fur.

I can’t pinpoint exact moments of when or how things fell into place, but they always did.   I think, perhaps, the fact that our situations were strikingly similar when we met helped in that regard.   Whether you realized it or not, you gave me the space to grow as an individual, to learn to love myself,  while sometimes giving me the tough-love-encouragement I needed to truly get over myself and my preconceived limitations.  You showed me that love isn’t supposed to hurt, physically or emotionally.  You showed me that a real relationship takes two individual people, working equally as hard to make things work.  You made me realize that in a healthy relationship it is OK to have your own independent feelings, beliefs, and emotions, without the world crashing down around you because you disagree.  But most importantly, you taught me that love doesn’t come with conditions.   All of this seems so simple, so basic, yet was all previously a foreign concept to me.

Sometimes I briefly mourn for that poor girl, the one who was full of self doubt, self loathing, and heartache and put up with so much, well, shit…simply for the sake of feeling accepted.   But the truth is, it was all worth it.  It was worth the journey and the heartache to arrive to where I am today.

I have become a stronger, happier, more fulfilled person, not because of you, but because you’ve been by my side.   And I am one of the lucky few in this crazy world who has discovered true love.

(I also bonk less during races, because you remind me to eat.  This is a very important quality in a life partner for me.)

It’s amazing to me that four and a half years later, I get just as excited to come home to you after work as I did in June of 2012.   Seeing your face after even just a few minutes apart still makes my heart flutter.  You are the first person I want to share my good news, hilarious stories, ridiculous gossip, and internet cat memes with.   You finish my sentences (and my dinner), you nag me just enough to keep me on my toes, and you not only encourage me to pursue my adventures and dreams, but you have your bags packed ready to accompany me on them…no matter how ridiculous and far fetched those adventures and dreams may be.  And most importantly, I am absolutely certain that not a single day has gone by without you making me laugh and making me feel loved.

So, because you only asked twice and said you wouldn’t ask a third time, let me answer you for a third time just so you know there is no doubt in my mind: yes, I want to marry you.  More than I want some of that boxed wine that I haven’t had in days.  More than I want a dozen little orange kittens, all of which I’ll name Mr. Bojangles but then beg you to clean their litterboxes.  More than I want to travel the world in an RV running every trail I can get my feet on.  More than all of the ranch dressing on all of the buffalo sauce covered fried vegetables in the world.  More than anything else that I can possibly even imagine or begin to convey with words, I want you by my side, always, for the rest of my days.

I love you, Geoffrey Hart.  It doesn’t take rocket appliances to figure that one out, but now that I’ve written it in a blog post, I guess that makes it official.  Let’s go get married. 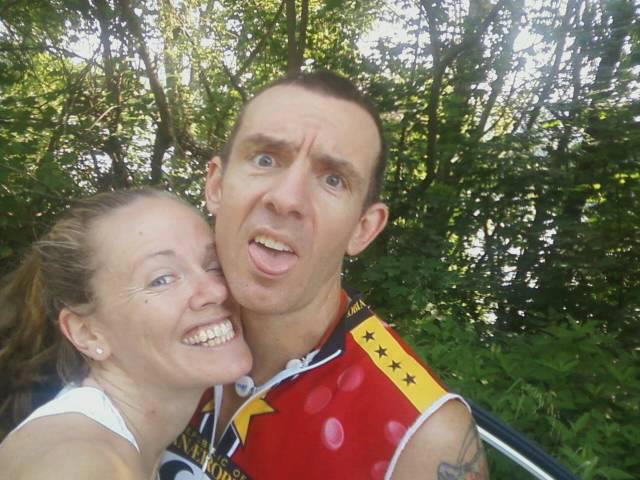