Blogger confession:  when I test out a product and find out I don’t like it, I typically don’t review it.    It’s not because I don’t think the product deserves my time…quite the opposite actually.  Constructive criticism is helpful, and most companies tend to listen to the feedback.   I, however, struggle to post negative reviews because I don’t want to hurt anyone’s feelings.  In reality, I’m certain big shoe companies have thick skin and wouldn’t even bat an eye at a negative review from some small blogger, but still, I hesitate to post anything negative.  I’m a sucker like that.

So when I received the Cloudventure from On Running last October (about 9 months ago now) and I didn’t fall in love with it, I let it quietly slip into the back of my closet, with nary a mention on this here blog.   Alas, 9 months later I’ve seen this shoe posted everywhere, and I’ve had a number of people ask me for feedback.  So reluctantly, the Cloudventures were unearthed from the back of the closet and given a few more miles underfoot so I could write a proper review.  So here it goes…and I promise it’s not all negative. 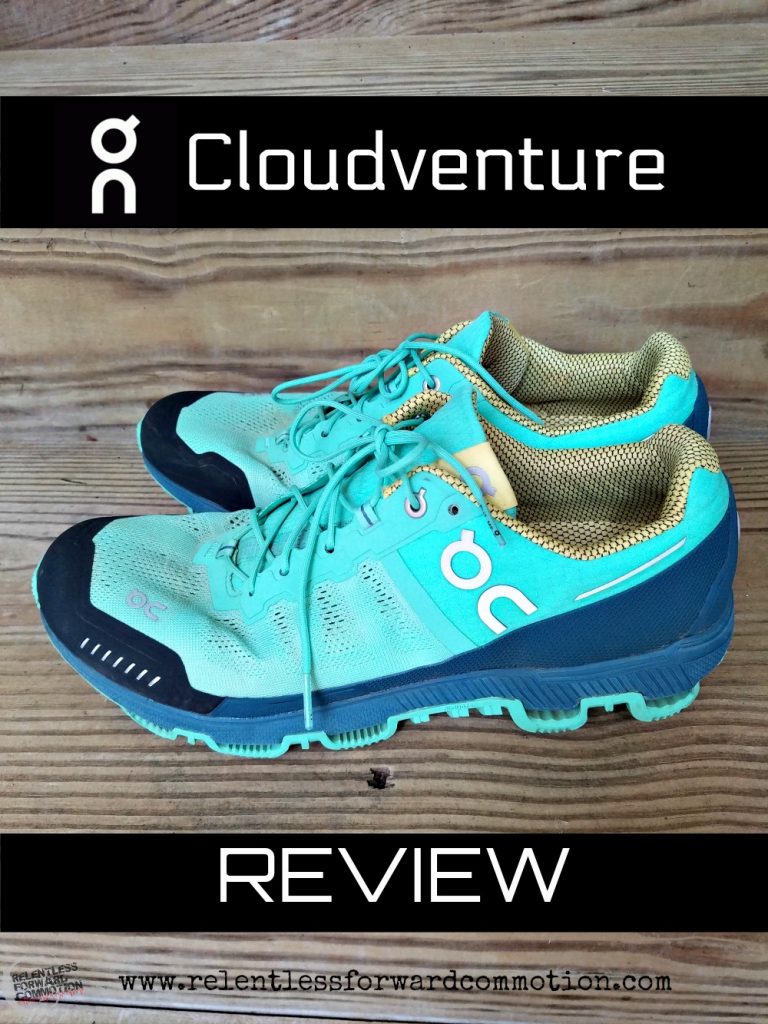 But first, a little On running history.

On is a running shoe company based out of Switzerland.  On was designed  by  three time World Duathlon Champion and multiple Ironman Winner Olivier Bernhard, as well Caspar Coppetti and David Allemann (the website doesn’t go into significant details about the athletic accomplishments of the last two guys).   The idea was to design a running shoe that would give athletes the perfect running sensation.  “On Running” is the result of their collaboration.

On shoes feature little hollow “pods” for lack of better terms, that On refers to as “Clouds”.  When you hit the ground, the highly adaptive rubber elements cushion both vertical and horizontal forces for a soft landing.  Once on the ground, the Clouds lock firm to provide a solid foundation for a natural and powerful takeoff.  According to On, the Clouds act like tiny stability balls, responding to every movement of your foot. They activate your postural muscles and enable you to stabilize your foot strike without artificial support, you are back in control.

I first heard of the brand back in 2012, when I met a PR guy that represented On while I was at the Spartan Death Race.  Man, that seems like a lifetime ago.  Anyway, the PR guy offered to send me a pair, and voila, the Cloudsurfer made it to the pages of Relentless Forward Commotion (though I’m pretty sure back then it was still Run Faster Mommy, but I digress).

Fast forward to October of 2016.  Time flies when you are writing shoe reviews.   Having since established a reputation for loving trails and hating roads, my new employers hooked me up with a pair of On Cloudventures to review, and see if it was something we wanted to bring into the store.   I really do have the best job ever.

I’m all about function over fashion, but I won’t lie, upon opening the box I was enamored with the color of this shoe. The Mint/Storm colorway was very pretty, almost a “Tiffany blue”, though my immediate thought after gushing over the color was “this color is going to get destroyed on the trails”.  I mean, getting dirty is what they are for, after all.   And since I’ve long misplaced the brand new, clean, pristine picture…just imagine this shoe even prettier. Note: they’ve been washed twice. 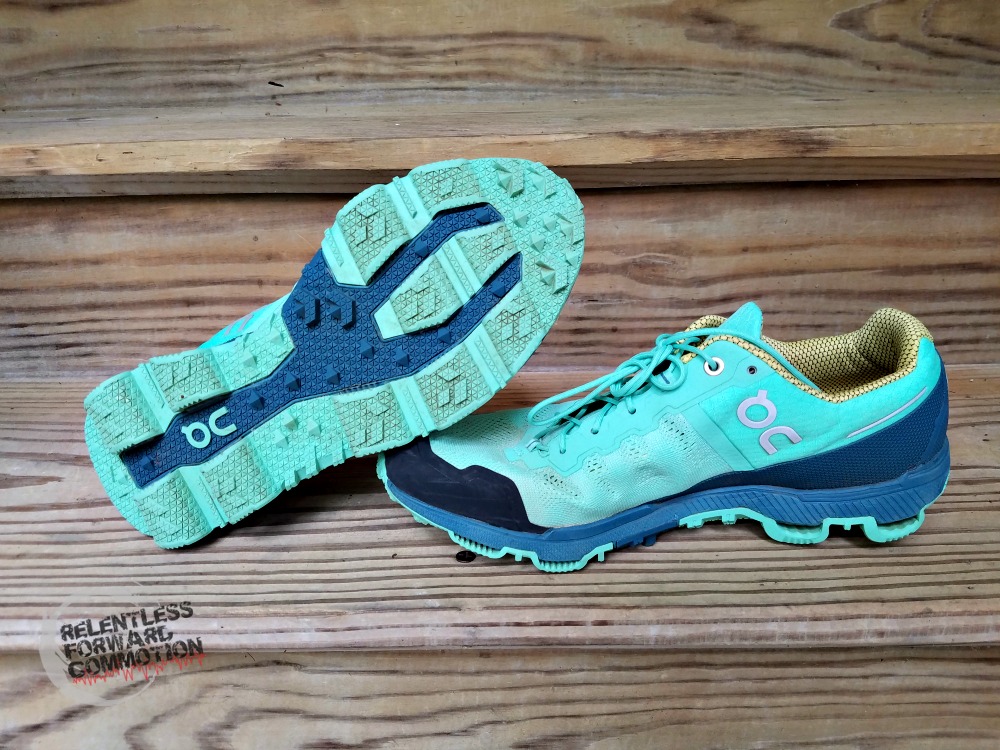 The fit of this shoe was indeed comfortable.  Not an overly wide forefoot, but not a narrow one either.    The upper seems well constructed, with a mesh mid to forefoot, firm/stiffer toe covering, and firm rubber heel cup, both to protect from the elements found on trail.  Nothing about the upper felt forced, if that makes sense.  No overly aggressive collar, no tight or stiff overlays.  Just a comfortable shoe. 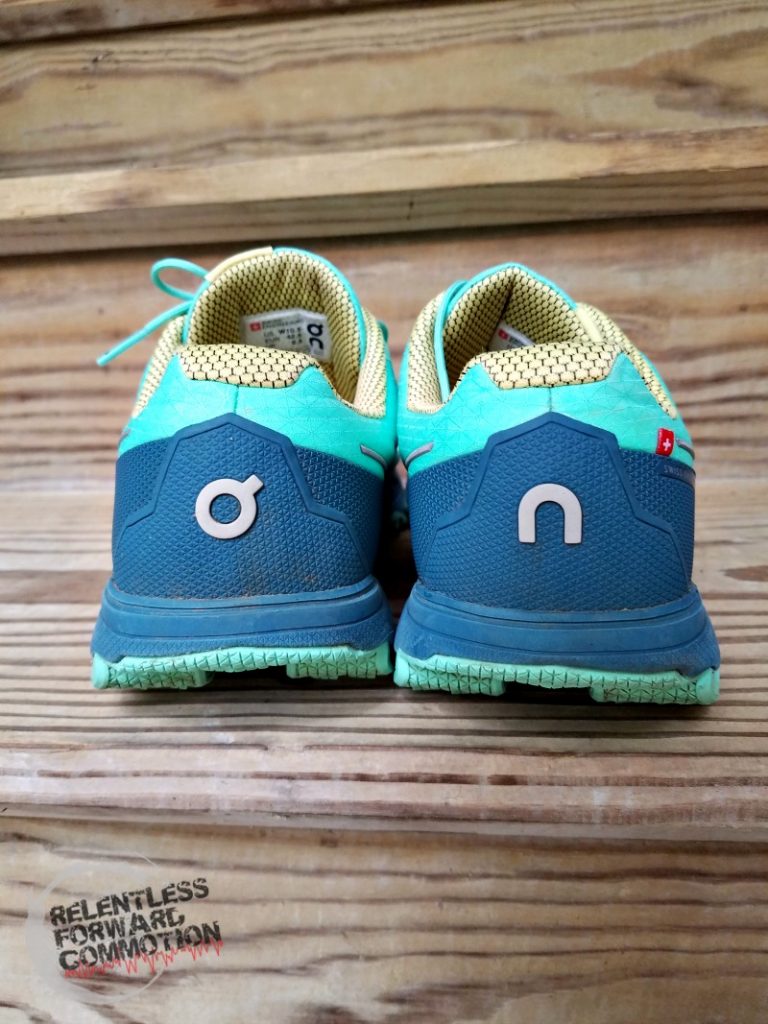 The lacing system is traditional, but comes with very thin, cord laces. I was skeptical at first, but they’ve always held up well. 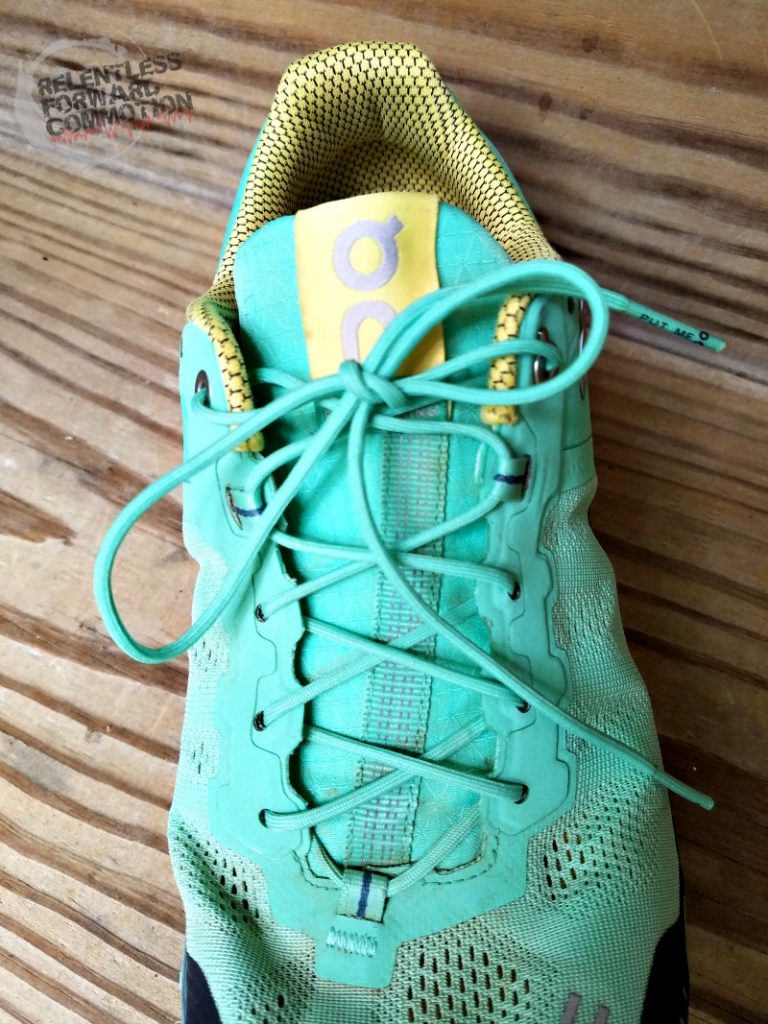 And then we get to the “Clouds.”  All over the website, the Clouds are touted as creating a more barefoot feel, and redistributing pressure when your foot makes ground contact.  Honestly, I could not have had a further experience.  Here’s where my review is unfortunately going to head south.   My two major complaints are as follows:

1. The clouds put very specific pressure points on my heels,  as the weight of my heel is now resting on four separate approximately one-square-inch “Clouds” rather than having the weight spread out over an entire, standard sneaker heel.   This resulted in heel pain after only a few miles. 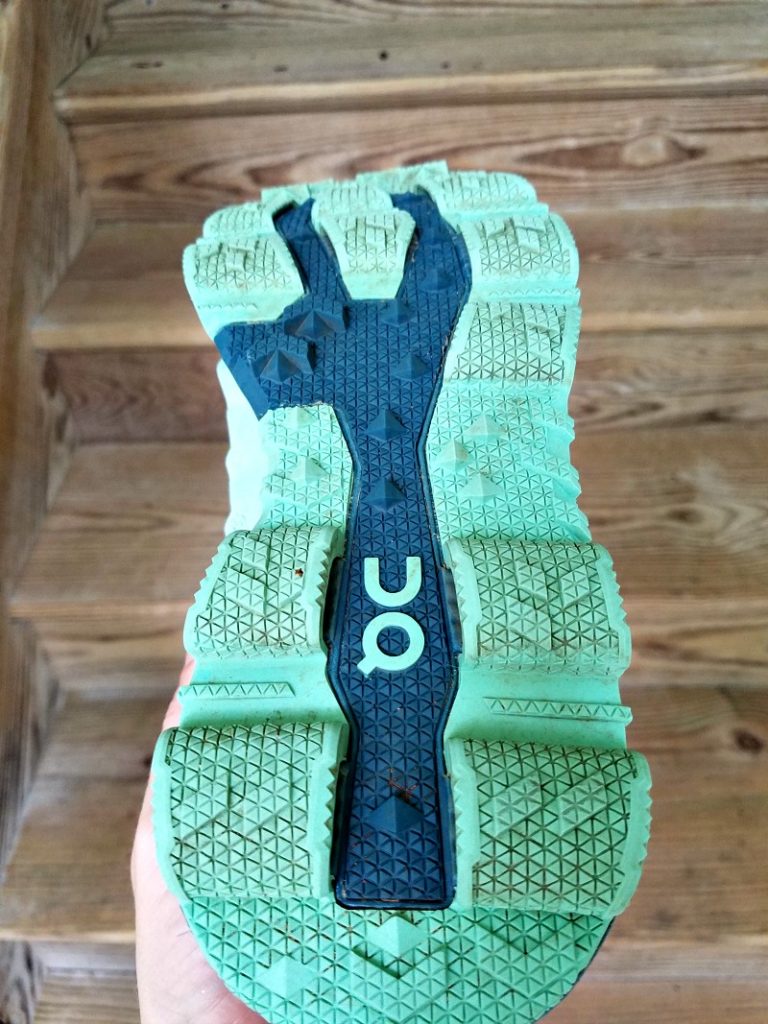 2. While I never actually did slide or fall, the pods left me without the ground contact feel I’ve become accustomed to.  In fact, when running up some slippery I actually kept bracing myself, thinking I was about to slip and fall. It was a very odd sensation that altered my gait, foot strike, and honestly, confidence on trail.   I tried to ignore it, as I never actually slipped, but the odd no ground contact feel was too much to ignore. 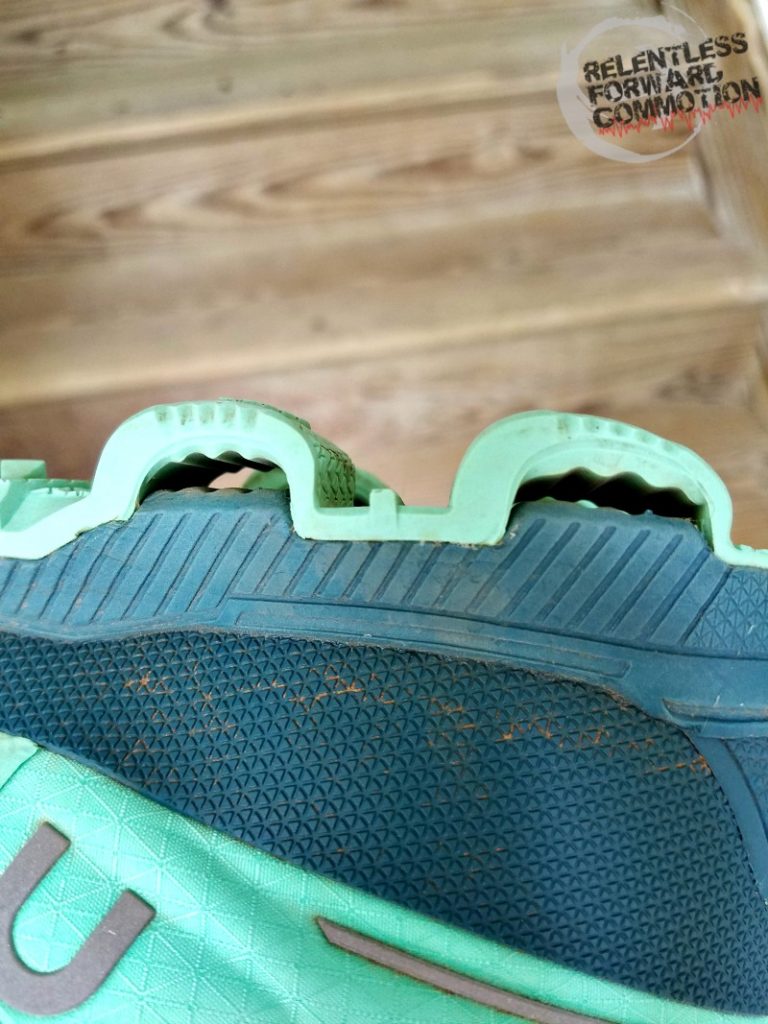 In summary, this shoe was comfortable, I will give it that.   Both Geoff and his mom had great luck running in the Cloudsurfer, and both of them wore theirs nearly into the ground.  When it comes to the Cloudventure, I just don’t think the “Cloud” feature is something that is conducive to trail running.  The Cloudventure would ideally be a perfect shoe for someone who already likes the On Cloud feel, but wants something slightly burlier for say, dirt roads or very, very non-technical trails.  As for me and the more technical, rooty, rocky, hilly terrain I prefer, not feeling confident on my feet due to lack of grip in or instability caused by a shoe, whether it is real or simply perceived, is a deal breaker .

Sorry, On.  I really did want to like you.

If you’ve run in the Cloudventure, I’d LOVE to hear your feedback, whether you loved the shoe or had similar feelings as me, please comment in the comment section below.

*Disclaimer: the On Cloudventures were provided to me in exchange for a review at no cost.  All opinions expressed are my own.