It was 8:00 am on a Sunday morning, and we had gathered as a group in the parking lot of our local trail.  Someone simultaneously questioned and declared “Who is in the fast group? I’ll be with slow group”.  Kain, my 7 year old, as if he’s known these people his entire life, chimed in “Fast group!” and took off running down the trail behind Geoff.  I literally didn’t have the time to tell him to wait up before he was gone, armed with nothing but the oversized GPS watch I strapped to his tiny wrist, and a FlipCam that he insisted upon bringing.

Every parent secretly wishes that their children will become passionate about the same things they themselves are passionate for.  In my case, it’s obviously running.  I fell hard in love with running when my oldest son was just months old, so both of my kids know nothing other than the fact that their mom IS a runner.  Early Saturday morning races, living room walls adorned with medals, and a mom who picks them up from school in running shorts is nothing new to my kids.

In fact, it’s all they know (at least in my home).

But many years ago I learned the hard way that you just can’t…and shouldn’t…push kids to run.  My now 9 year old fought vehemently against a number of tot trots when he was much younger, complete with tears and ripping off the race bib.  Even a more recent “color run” ended in complaints and walking, only a few minutes in.  I get it, not everyone likes to run.   So I’ve never pushed it.

But this year, I’ve randomly discovered that my littlest kid seems to lack the fear of discomfort that so many people hate about running.  In retrospect, it’s no surprise…there isn’t much he fears.    And not only is he seemingly immune to that discomfort, but he is pretty good at what he does.  I suggest a quick “jaunt” around the apartment complex, and over a mile later he’s not only still going, but telling me to pick up the pace.  And not only is he seemingly immune to the discomfort, pretty good at what he does, but just like me…it is almost a necessity in his life.  Only he doesn’t know it yet.  A whiney, fidgety, borderline disrespectful 7 year old boy does a 180 into a happy, content, polite little man after a run.   It calms him.  Which in turn, helps calm me faster than a glass of wine.  You know what I’m talking about, moms. 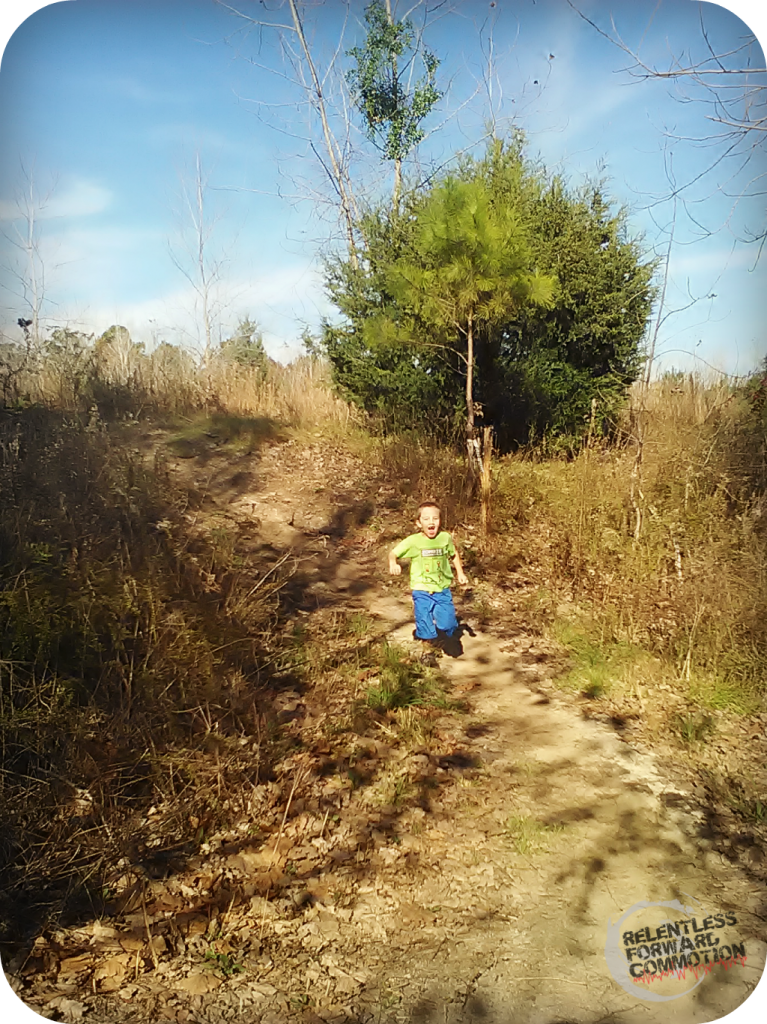 But back to the trail.

Kain takes off behind Geoff. The two of them decide to run in the opposite direction of the rest of the group (for some reason, a lot of the local runners like to run in the “bike” direction instead of the designated “run” direction. I think they are trying to avoid the hills.  Shameful, haha.)   In the blink of an eye he’s gone.  I’m walking with my 9 year old whose fast walking pace is slightly slower than a shopping mall stroll.

My mommy pride and instinct both kicked in at the same time.

Yet I silently freak out that he is just barely out of my sight.

Lately I’ve been talking a big game about how much I wish my kids had the childhood I had, free to roam the woods , as I did in Vermont.  “Free range kids”, the term so many online articles have coined.  The benefits of allowing kids to explore, create, and play outside without supervision, are endless.  Yet in our society today, the uninhibited, unsupervised, outdoor play time has become a rarity.  And not only a rarity, but often a punishable offense, a sign of negligent parenting.  So it both thrills my heart to see my child fearlessly barreling down the trails, and it terrifies me to think of every little thing that could go wrong during those few feet and minutes between us.

As he picks up speed and the distance grows, I hang on to tiny glimpses of his little body darting through the trees, while trying to stifle the urge to tell my 9 year old behind me to hurry up.   Said 9 year old takes this opportunity to sadly question why he isn’t a good runner, like his little brother.   I offer him a piggy back ride, figuring I can give him a break, give myself a bonus ruck workout, and walk faster trying to keep up with the 7 year old, all while explaining that we all have different talents, strengths, and weaknesses.  And that it’s OK that he doesn’t like to run, because there are so many other things he is good at.  Our differences are what make the world so special.

It’s not until the two mile marker that Kain simultaneously darts completely out of my sight and finally stops.  I experience terror followed by relief,  allowing me to finally catch up and put in the thousandth reminder to never go so far ahead that you lose sight of mommy.  Also the countless reminders of not leaving with strangers, and that if by some chance we get separated, that he should stop exactly where he is and wait for me.

He assures me “I know, mommy.” And follows up with “Here, I made you a video.” and hands me the Flip Cam.

17 minutes of him narrating a run.   In the video I watch him politely move to the side of the trail to let cyclists pass, just as I taught him.  I listen to him ramble on about how fun the trail is, just as I hoped he would.   I see Geoff cut back in and  out of the frame numerous times, encouraging Kain each time.  I also hear him tell the world he wants to go to Dunkin Donuts, declare that he needs to go to the bathroom, and ask people to “subscribe to his YouTube channel and leave comments”. (He doesn’t have a YouTube channel, let alone know how to upload a video to the internet.  Little does he know this gem was too good not to share, so I uploaded it for him. )

Sometimes, I don’t have a point to the posts I write, I simply feel like sharing my experiences and stories.  And this, perhaps, is one of those situations.

As a fitness professional, I often wonder what it is that causes some people to fear the discomfort of exercise and physical activity.  Or fearlessness for pushing our boundaries in general.  I wonder if it is an issue of exposure, nurture if you will, from a young age, or if it is something we are intrinsically born with.  Looking at my boys and the differences between them,  I’d lean towards the latter explanation.

But I will say, there is no doubt that the fearlessness my child possesses results in that much MORE fear in my heart FOR him.

But in this case, it is a burden I’m more willing to bear. 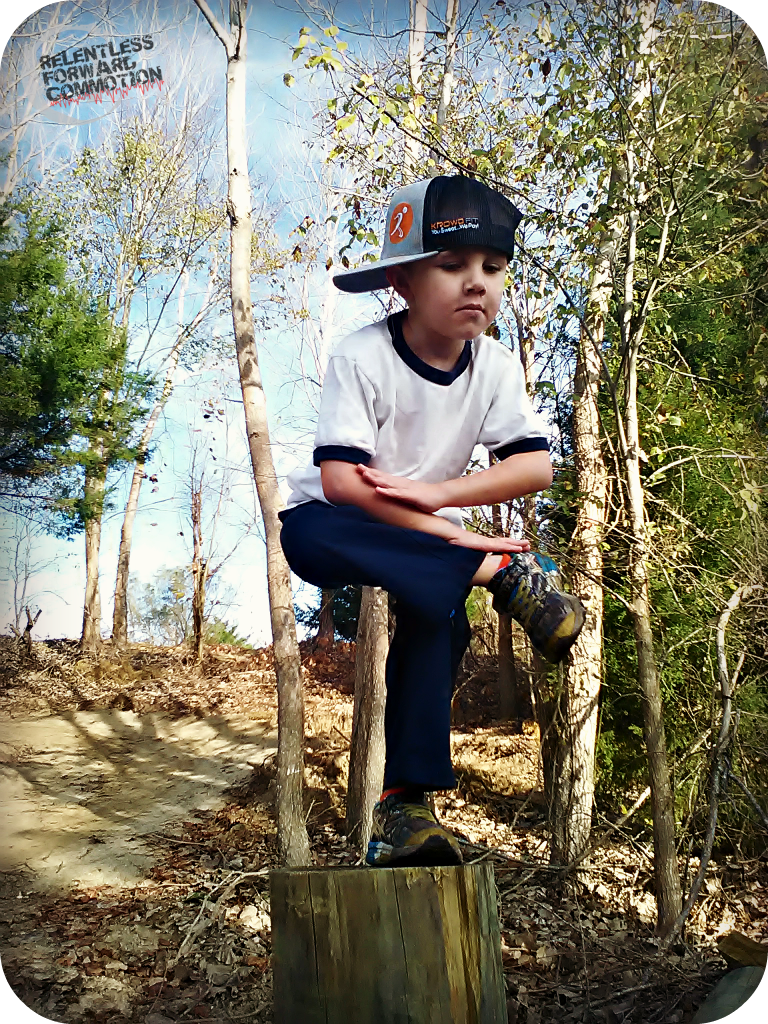