Not to be confused with the Sun Fun Run, that is a different race in June. (seriously).

This was my first 5k and first race that I was going to actually “race” since New Years Day. And surprisingly, I went into it incredibly confident. Not overly confident, but confident none the less. You see, all of this zone 2 training that I’ve been whining and complaining about for the last few months is working, slowly but surely. Granted, there would be no zone 2 in today’s 5k, but the point is, I’m becoming more in tune with my breathing and confidence as a runner. Which I’m going to take a wild guess and say my oxygen carrying capabilities are slowly increasing, which makes me dance around like a giddy little girl. Really, these things make me happy. I just LOVE running!
Point being, I’m learning slowly to distinguish that fine line between physical pain and mental pain, and learning how to shut them both up when I want to.
I picked up Rich’s little sister Hope at 7:30 and we headed down to Huntington Beach State Park in Murrell’s Inlet SC. It was chilly this morning (meaning in the 50’s) but the sun was out and it was going to be a gorgeous morning, you could just tell. We picked up our bibs and t-shirts, then sat around in my car for a good 30 minutes. Eventually, we wandered over towards the start and took off backwards on the course for a good 1 mile warm up. 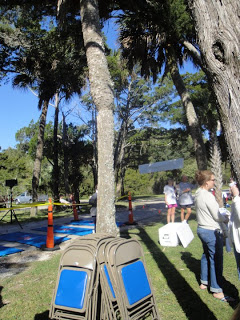 Yaddi yaddi ya, normal start routine, we lined up somewhat near the front, gun went off, and I TOOK off. There is absolutely no denying that primal instinct to run as freaking fast as you can when everyone around you just takes off sprinting. Luckily, I’ve learned enough about racing 5k’s in the last few years that I always look down at my Garmin after the first few hundred yards, despite how “great” I’m feeling. 6:30/mile. Yeah, slow it down cub scout, that’s not gonna bode well in another half a mile. I slowed down to about a 7:15-7:30 pace and just ran. The first 1.25 miles is an out and back. I had no thoughts in my mind except for “run” and “don’t stop till you get enough” Oh yeah, i was rocking a little MJ on the ipod. I’m not normally an ipod racer, but I was just feeling it this morning, so I went with it. And the rules didn’t say otherwise 😉 At the turn around, I saw the leader, and then counted the number of females ahead of me. Three. Not too bad.
1.25-about 1.7 miles was over a causeway of salt/freshwater marshes, complete with a “do not feed the alligators” sign. No joke. It was at the end of the causeway and around a bed that I realized that no one…male nor female…had passed me in a long time. I glanced over my shoulder to see….no one. Not a soul. I couldn’t believe there was this much of a gap towards the front of the pack.
Mile 1 and 2 were great, 7:24 and 7:38 respectively. Towards the end of mile 2 I was literally on the heels of the 3rd place female, a very young girl, maybe 14 or 15. And as we started the last mile, I all of a sudden started to lose my momentum. Young girl took off. I looked behind me, still no one there, and as much as I hated that I did this, I’ll admit it…I stopped. I stopped and walked for a total of maybe 5 seconds. I have no idea what that 5 seconds could have possibly done for me, but it is what it is. I yelled at myself and got back to moving. Eventually, I was on the heels of young girl again. Just as I thought I was going to be able to pass her, she took off.
Turns out the girl I couldn’t catch is the daughter of Zola Budd, so you know, I felt a little better about not being able to catch her. She’s got to have fast genes. And she beat me by 10 seconds.
The last 3/4 of a mile is a straight away. It’s a huge tease because you can literally SEE the finish line, but it’s still quite the ways away. I tucked in behind a guy who was going about my pace and just ran with my head somewhat down (I also apologized to him at the finish, as I’m sure my huffing and puffing practically on the back of his neck must have been incredibly obnoxious, haha. He just laughed. Runners are great). I couldn’t give up now, as I knew the gap between my butt and the rest of the runners was getting much smaller. Last mile was 8:03. And of course, I just about sprinted with all that I had left the last tenth of a mile. Not because anyone was near me, not because I was close to a PR, but just because I was ready to be done. The faster you get to the finish line, the sooner you can stop running, haha.
Final time: 23:36. Not a P.R., but it was a post-baby-#2-P.R. by 9 whole seconds. Woohoo!
4th female overall, first in my age group of 20-29. And you know what got me through the very end of the race? The promise they gave us at the start for trophies for the first place winner of each age group. Yes, I am a cheeseball who loves the the tacky, generic, gold painted plastic trophies. And I’m not ashamed to admit it. So how dare they give me something so practical as a coffee cup… 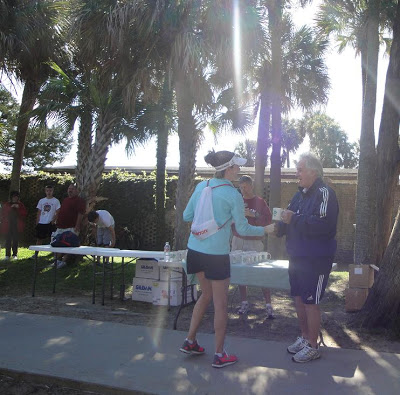 Haha just kidding. I put it on my trophy/medal shelf anyway. Poor thing would never see the light of day otherwise, as I haven’t picked up the coffee addiction yet.

And my kick butt sister in law Hope also took first in her age group. Look at us rockin the coffee mugs. 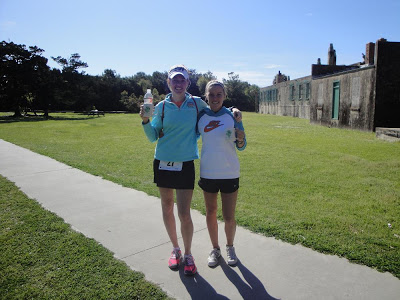 So overall, I had a pretty good race, leaving me feeling even more confident. I didn’t get passed by a single female, and only maybe 2 or 3 guys (after the initial first few hundred yard chaos). This shows me that I’m getting better with my pacing. I am kicking myself for the 5 second walk break. Seriously, it’s 3 miles darlin, no need to walk. Alas, I am pleased with my finish.