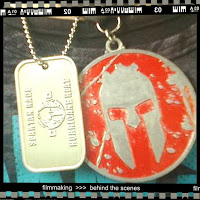 (This is part 2 of the recap of my day at the Amesbury Sports Park.  For part 1 & the Hurricane Heat recap, click here)

After the Hurricane Heat, I had pretty much covered the entire Spartan Sprint race course a few times over, but I was still really excited to take part in the actual race itself.  I came off of the HH totally fired up and high on adrenaline and endorphins, ready to snag Geoff and get him out on the course.

So let’s rewind for a second here.  Back in June I snagged this super amazing boyfriend who is probably more of an endurance junkie than I am.  I’m talking his apartment looks like a gear shop, and he has YEARS of racing on me. I’m not calling him old or anything ( I swear) , I’m just saying, he was on a bike back when I was still rocking the side-pony-tail and a New Kids on the Block fanny pack.  And despite ultra marathons and century rides and 24+ hour adventure races, he has never, ever done an obstacle course/mud run. Ever.  Needless to say, I was really excited to be with him as he lost his “sparkle” (the term dubbed for first timers by the Spartan Chicked community.)  No, I can’t say “losing your sparkle” with a straight face either when referring to a grown man, and thus, I will mention it several sarcastic times throughout this post.

Now, in true Heather fashion, I totally botched our registrations, and had me signed up for Saturday, and Geoff signed up for Sunday.  But with the help of the awesome Spartan staff, we got it all straightened out.  Dropped our gear bag, put our chips and bibs on, sharpied our numbers on, and slipped into the 10:30 heat with just minutes to spare.

With the traditional pre-heat speech about 300 Spartans per wave, the battle we were about to face, and an “Aroo, aroo, aroo!” we were off. Straight up a giant hill. 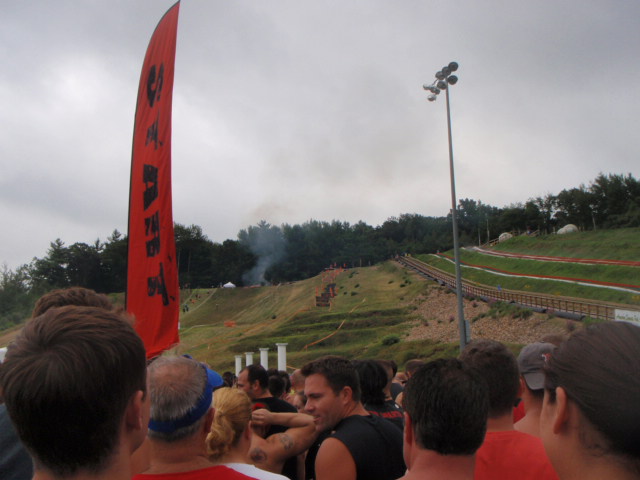 Despite the fact that I literally covered the course about 4 times, I still don’t remember the exact order of the obstacles.   I know people search out these blogs before their first race so they can see exactly what they are up against.  But here’s the great thing about Spartan races: it’s all a big secret.  Sure, the more you do them, the more you know what to expect, but the unexpected is half the fun.  Prepare for ANYTHING. Test your physical and mental limits.  I will tell you this, there is crawling, there is climbing, there is mud, there is fire,  and there is running.

However, before we get to them, here are the race highlights:

– Racing with the man, obviously. Nothing like bonding while throwing each other over 9 foot walls or laughing at the other when he completely loses his shoe in swamp muck.  Running, pushing your physical limits, and not being afraid of dirt, sand, or mud (seriously, dated a few that were) are prerequisites into my world.

– Getting to the sandbag carry (straight up that huge hill in the start, and back down again) and being faced with two sandbags: red for men, pink for the ladies.  Guy at the base told me to grab pink then said “actually it’s ladies choice.”.  I asked him what the difference was , and he said an extra 20 lbs.  I grabbed the red bag, and proceeded to pass dudes up and down that hill.

-the barbed wire crawl. About halfway through, I ran into  pals Andrew & Eric, and the conversation flowed as if we randomly crossed paths over coffee at Starbucks. Nothing like introducing people and discussing training plans while your face is practically in the mud and your head hovers dangerously close to razor sharp barbed wire.  And then a mud fight ensued (as if we weren’t muddy enough). Only in the Spartan community, I swear. Bunch of crazies 🙂

-the burpees. I love to hate them and hate to love them.  Sadistically, I just love them.  And lucky for me (note the sarcasm), in addition to the mandatory 15,000 (I kid, felt like it though) we did in the Hurricane Heat, I failed to complete the log balance (30 burpees), the spear throw (60…Geoff got it, beginners luck!) the monkey bars (90, fell off earlier in the morning and hurt myself, so I was sort of gun shy I suppose) and the rope climb (120, pissed about that one, since I climbed in no problem twice earlier). 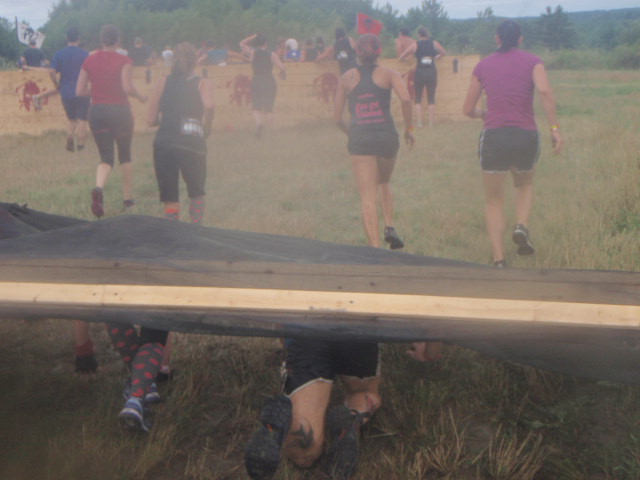 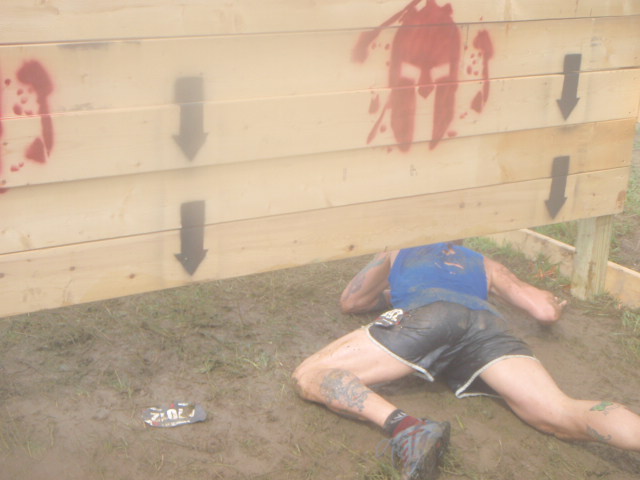 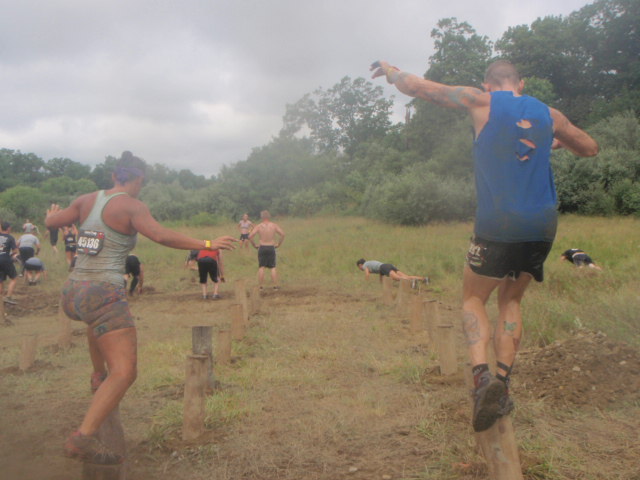 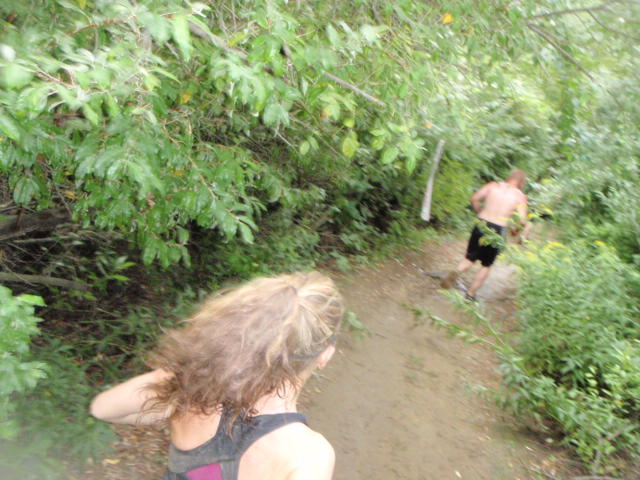 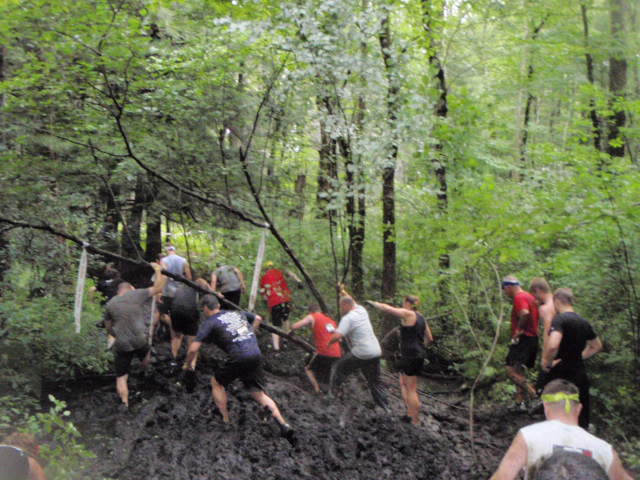 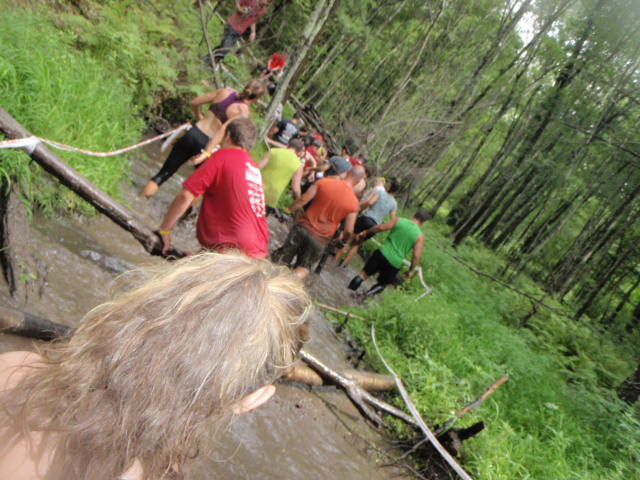 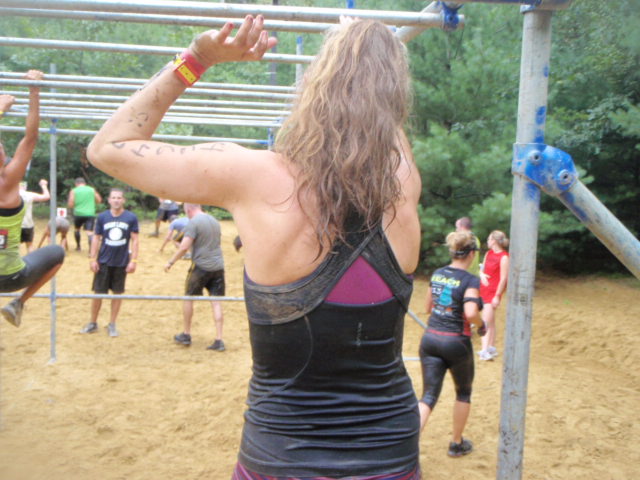 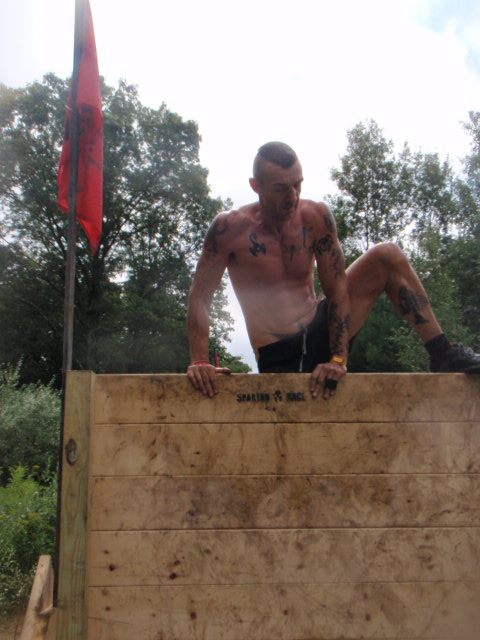 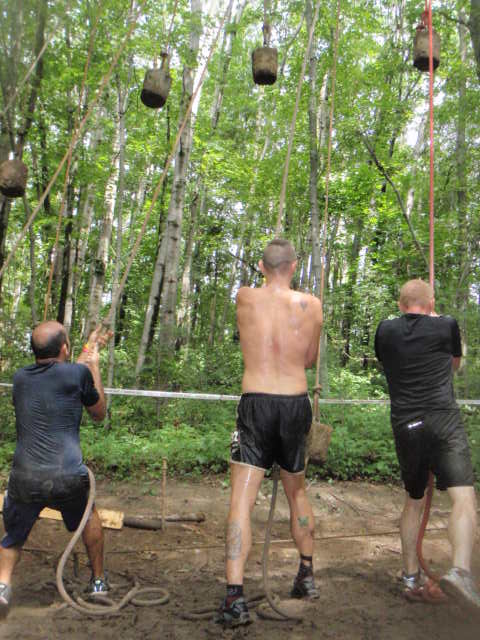 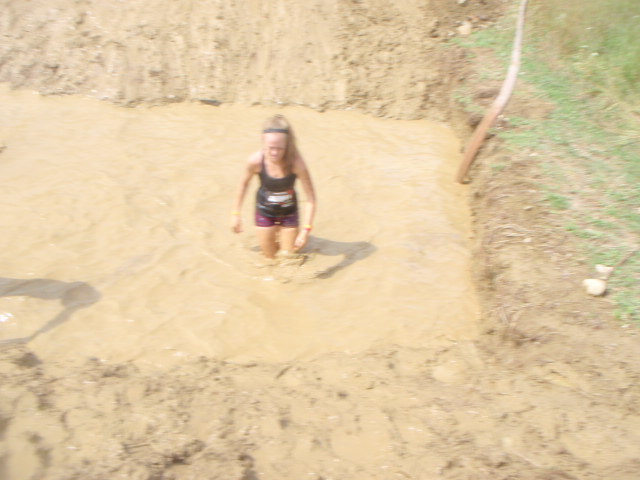 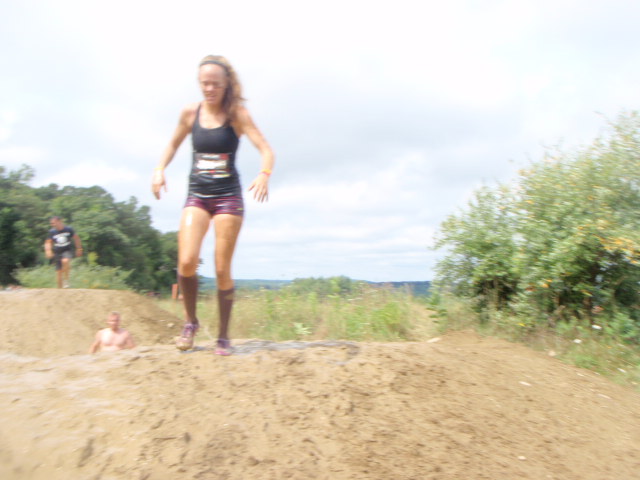 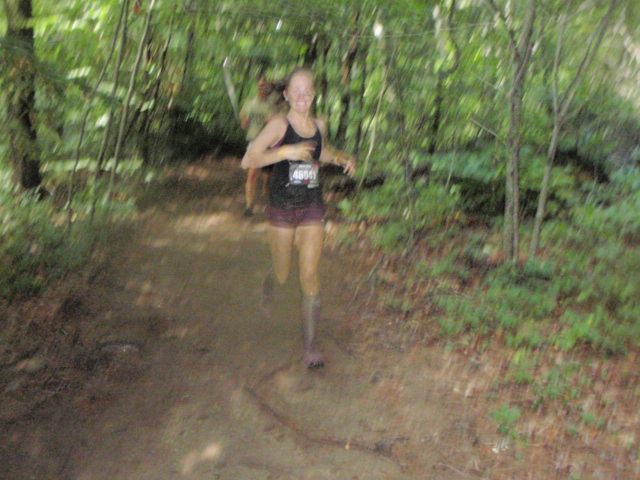 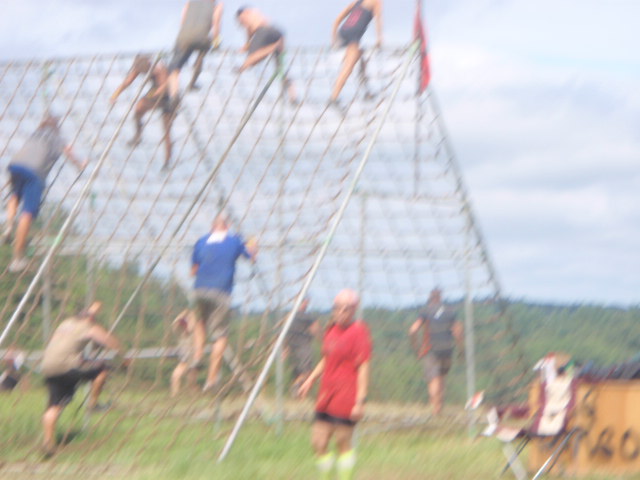 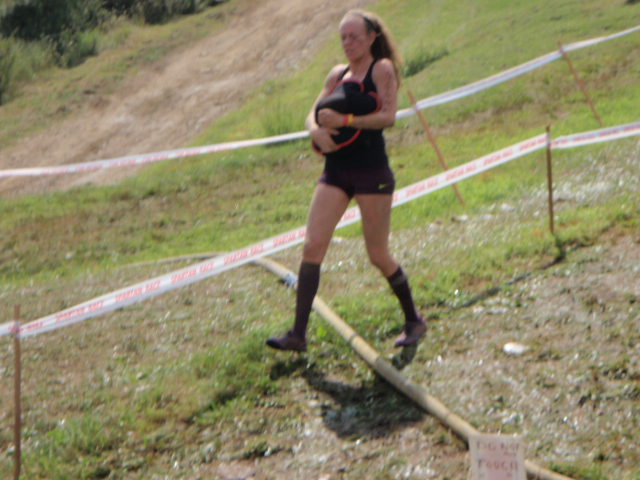 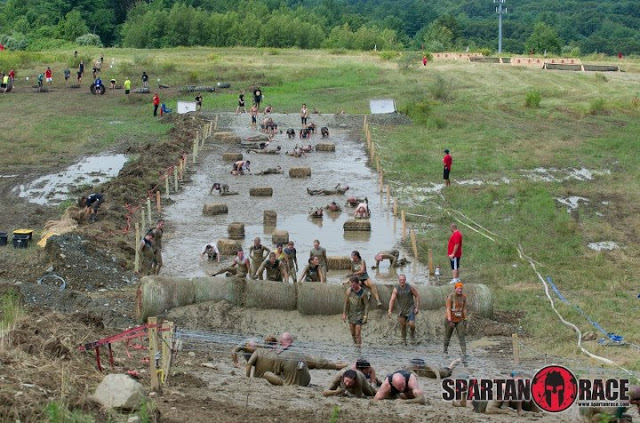 I have to admit, even though I wasn’t “racing” I was still dragging more than I would have liked to.  The lack of sleep the night before, impending virus (more on that in a minute) plus the 3.5 hour hurricane heat left me dragging by the very end of the sprint.  Geoff being a true gentlemen certainly waited around for me, but I must say, we passed countless people out there.  (Hooray for all of that trail running training, I honestly dread ever running on pavement again).

We finally came to the traditional fire jump, barreled down the hill, climbed up and over the soapy wall climb, and pushed through gladiators and their pugil sticks.   Now for the second time in a row, I must complain, the Spartans take it easy on the chicks.  Now I’m not saying I want to take a blow to the gut and have the wind knocked out of me right at the finish line, but challenge me a little.  I’m not there to tiptoe through the course.   It’s sort of disappointing to watch my boyfriend barrel through and get hit pretty hard, then when it’s my turn I get one little tap from the first dude (seriously, my 3 year old can hit harder)  and not even a flinch from the second guy, he just let me run by.

And almost as quickly as it started, it was over.  Another Spartan race in the books. 1/3 of my Trifecta done.  So many of my fellow Ultra Beasters were out there putting in 2, 3, some even 4 more laps on the course.  I on the other hand, had to listen to my body. I was tired and sore, and as it turned out, just a few hours later, came down with a nasty cold that I am still battling 6 days later (I hate you immune system!!)  But our day was done.  We posed for our muddy pictures, hit up the Dial for Men showers, changed, grabbed our free beer, and cheered in one of our friends as he finished his first Spartan as well. (Excuse me, I mean as Timmy lost his Sparkle too!) 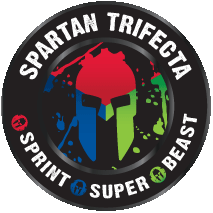 Next stop in the Trifecta quest:  Mid Atlantic Super Spartan in Leesburg VA August 25th.  Until then…burpee on my friends.