Last year I posted a review of the original Nathan VaporHowe 12 L hydration vest.  As you may or may not recall, I had a sneak peak of a prototype in August of 2016, and then hounded my local Nathan rep every time I saw him until the vest was finally released to the public in early 2017.  I got my hands on a 12L VaporHowe as soon as I could…and literally ran the thing into the ground.

To say I loved that vest was an understatement.  It was snug, comfortable, and almost felt like I wasn’t wearing a vest at all.  The 12L size is large enough to stuff everything I could possibly need in it, but the fabric is light enough that isn’t bulky when empty.

So imagine my excitement when I saw that Nathan had released an updated version, the VaporHowe 2.0, in the most gorgeous shade of purple you have ever seen. 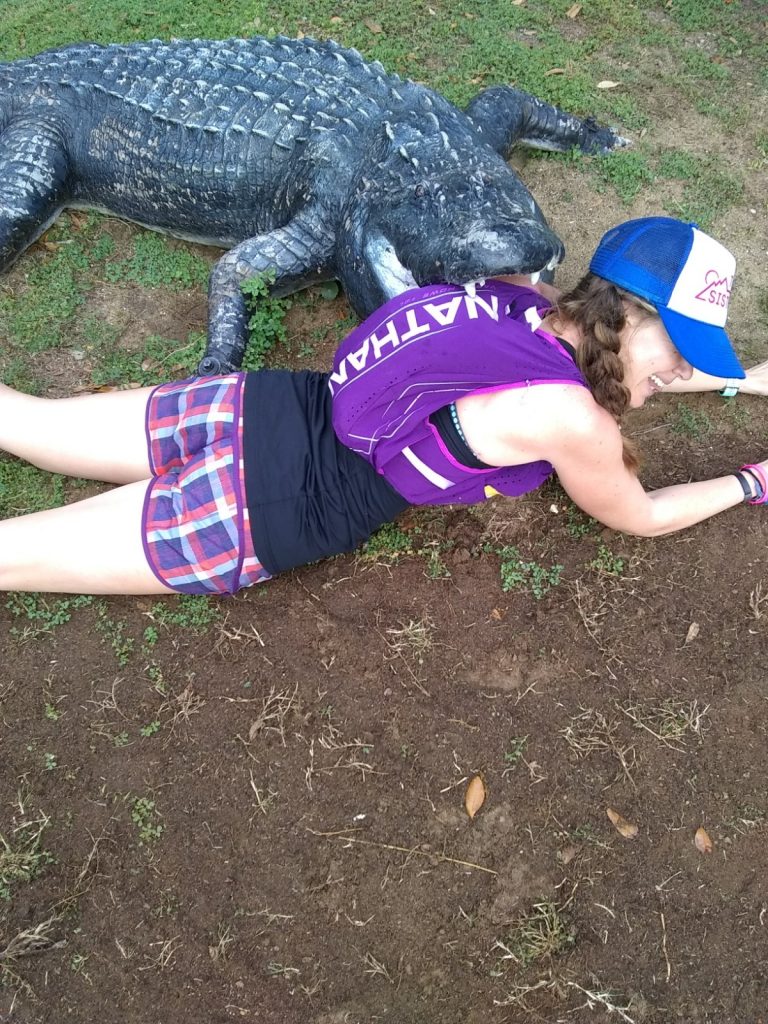 Oh you know, just modeling my new vest in the mouth of an alligator. No big deal.

Hey, I don’t do the typical female thing where I have a closet full of expensive heels and handbags…instead my closet is full of expensive running shoes and hydration packs.  So forgive me for getting excited about the aesthetics of this update.  It’s freaking gorgeous.

But more importantly, I was excited for the technical aspects of the update, hoping that Nathan would have addressed a handful of minor concerns and complaints I had about the original VaporHowe. 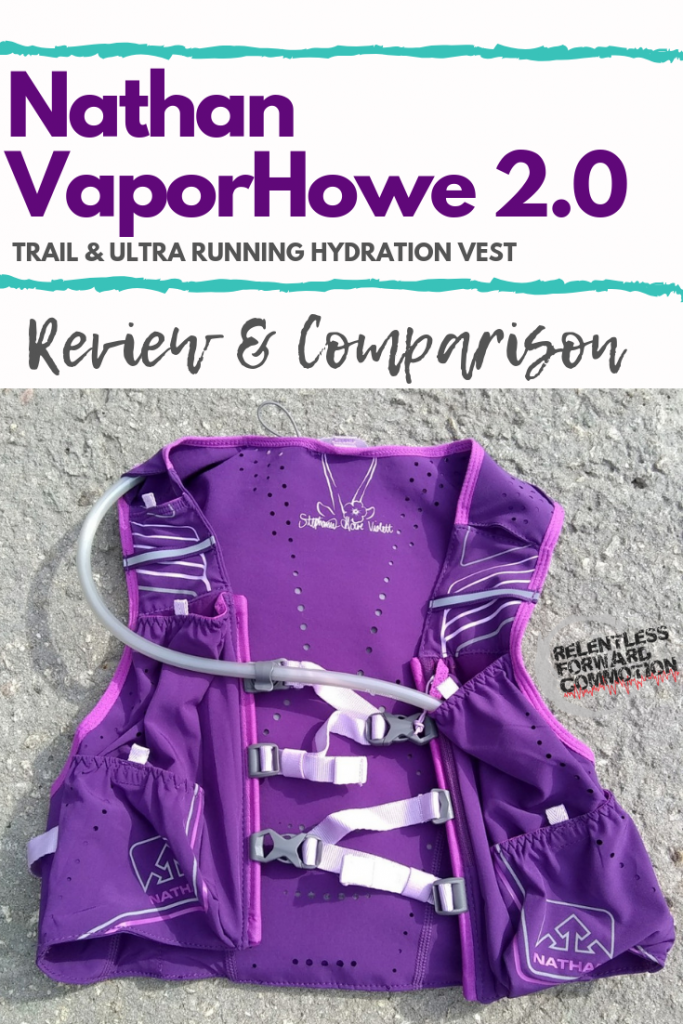 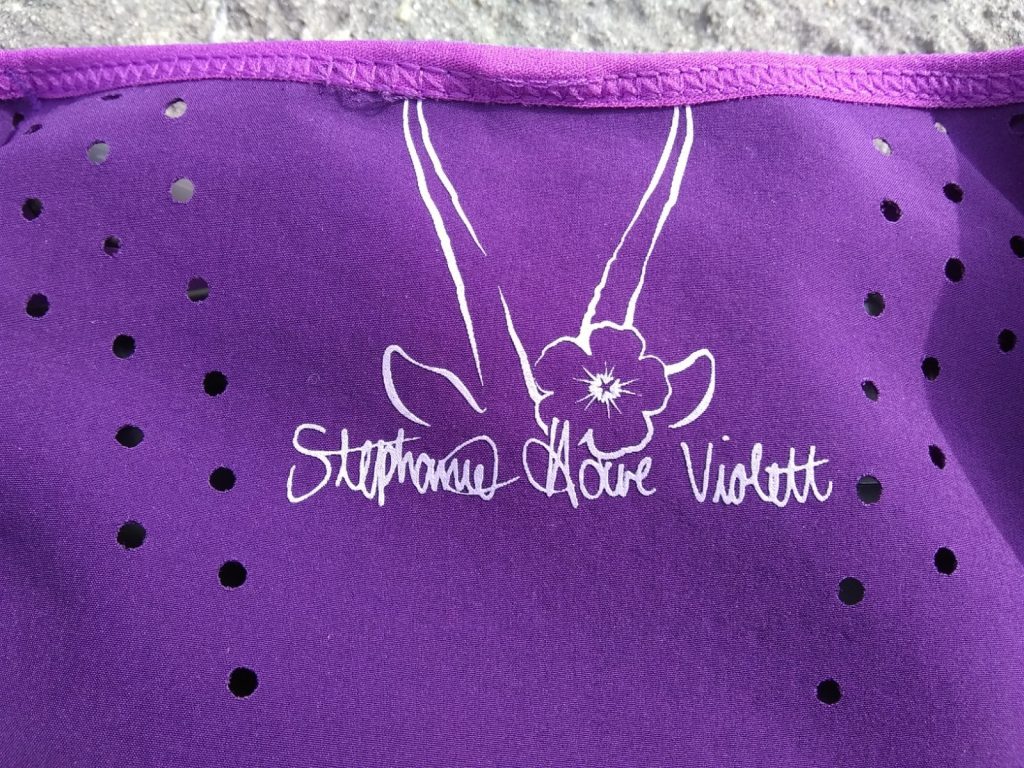 Let’s start with the features we already know and love about the original VaporHowe, and cover what has stayed the same in the VaporHowe 2.0:

Nathan didn’t change a thing about my favorite aspect of this pack: the fit.  It’s still a female specific compression fit (with sizing from XXS – XL), with fitted side panels that provide an apparel-type feel.  The VaporHowe 2.0 features an internal compression system that tightens the packs load against your back for stability, as well as side compression straps to stabilize the load and proved a more custom fit.  It also ensures that the pack doesn’t bounce, and provides significantly LESS to no chaffing (sorry, I don’t buy the claim that it won’t 100% not chafe, I think skin sensitivity plays a huge factor here, especially against bare skin. I’ve only chaffed in the original VaporHowe when I was running in just a sports-bra, though the chaffing was minimal).  The fabric is also buttery soft and breathable: a MUST for running down here in the South during the summer. 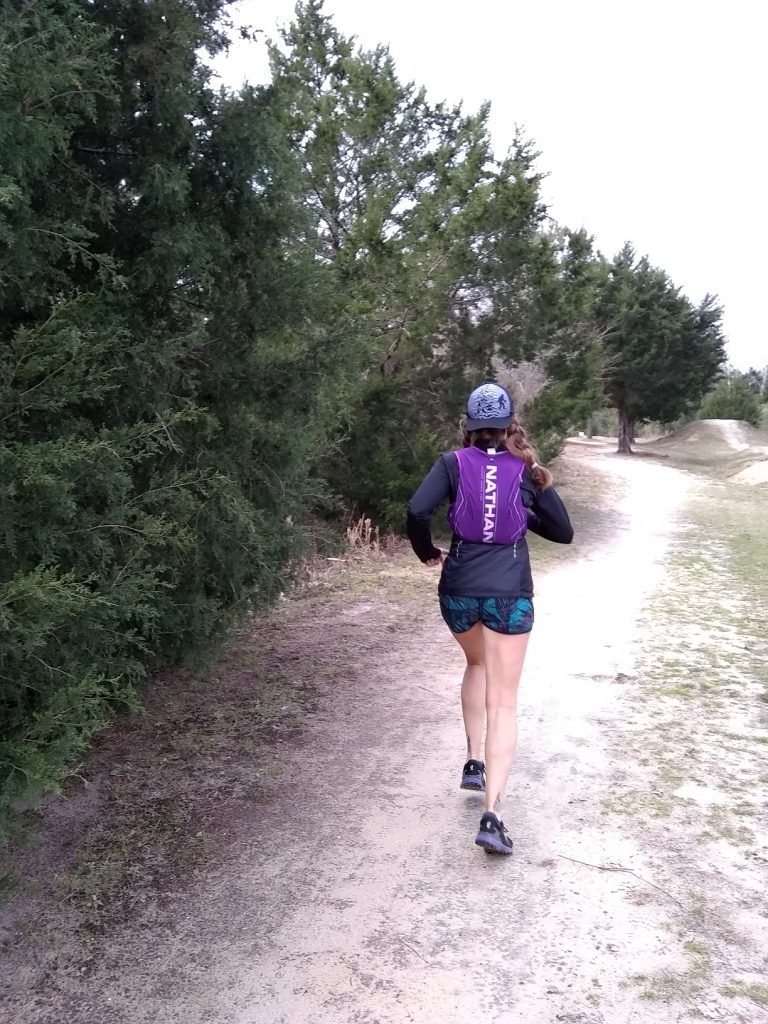 Though some of the zippered accessory pockets have changed (see below) the main large stash pockets on the front are the same. In fact, I might even say that they are the tiniest bit larger/deeper, which is only a bonus.  I easily fit a 500 ml / 17 oz soft flask in the pockets, though Nathan claims they will hold up to a 22 oz bottle or flask. I have no reason to doubt that claim, there is definitely room.  Note: the 4L version of this pack does include the soft flasks, but no hydration bladder. The 12L version that I am reviewing comes with a bladder (see more below) but no soft flasks. 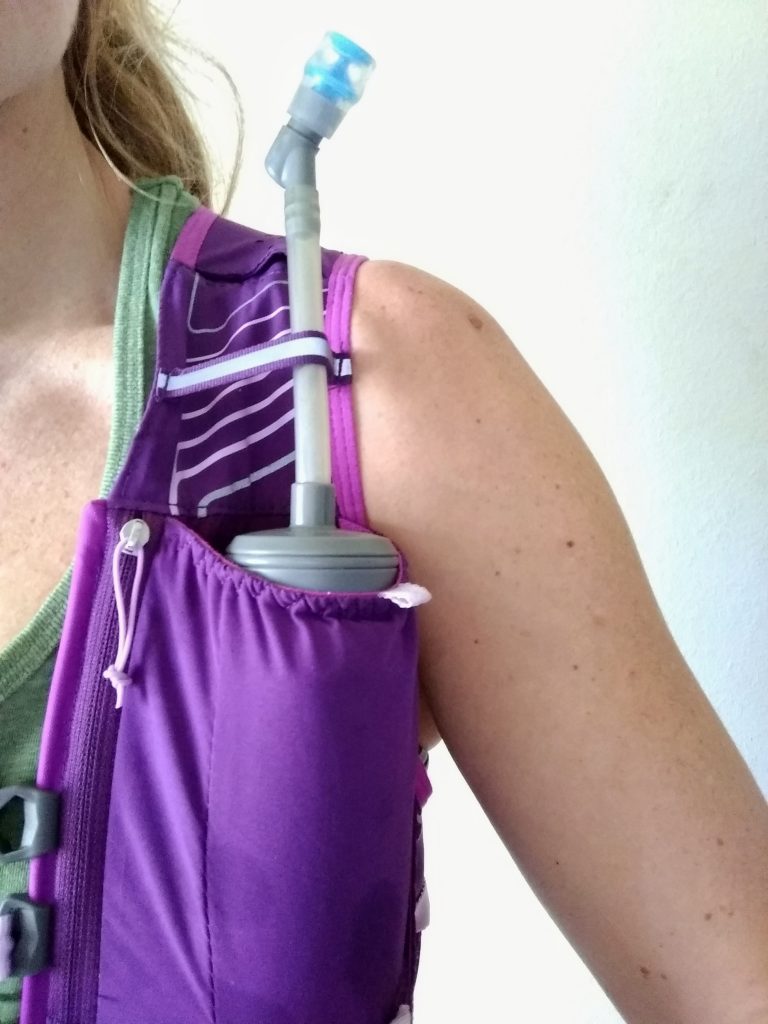 The innermost back pocket of the VaporHowe 2.0 features a Velcro attachment system to attach your bladder to, helping to minimize both bouncing of the pack and sloshing of the bladder. It also prevents the entire thing from sinking low into the pack as you drain the bladder of water.   You’ll also notice in the picture below a “haul loop”  so you can hang the pack from something, OR hang something from the pack.  Your choice. 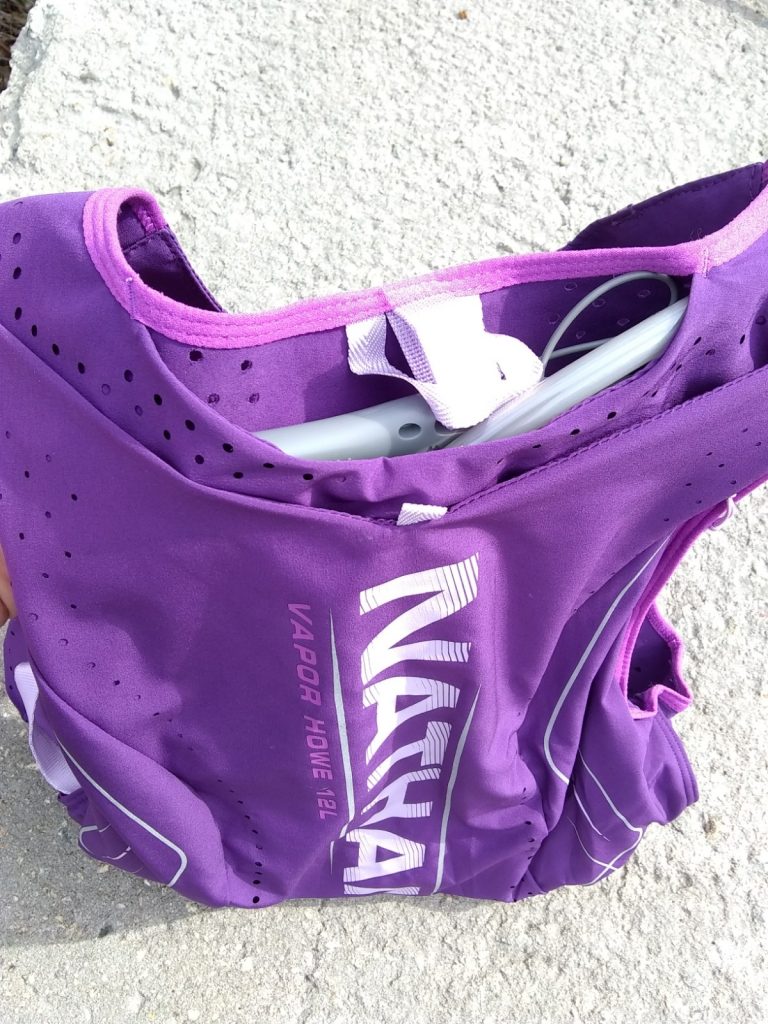 The entire straw system on the VaporHowe 2.0 is identical to the original VaporHowe.  This includes an extra long straw, which I’ve been threatening to cut for years (but haven’t yet) , and a very convenient magnet to prevent the straw from bouncing around when you are not drinking from it. 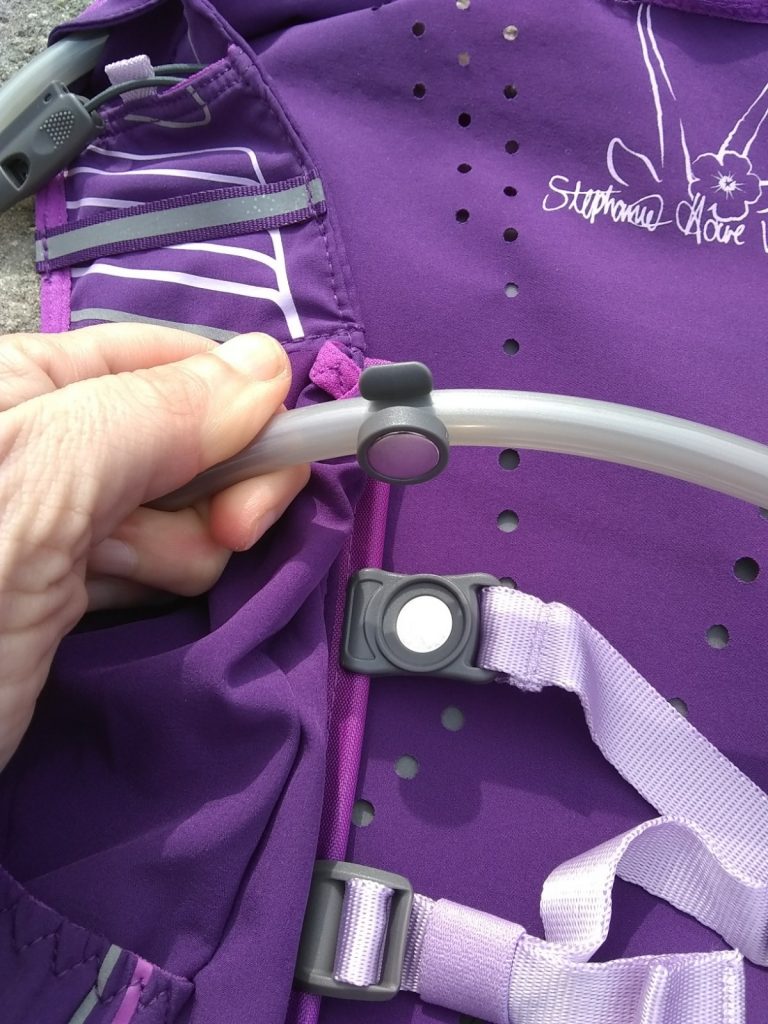 Here are the major changes that I noticed in the VaporHowe 2.0 update versus the orginal VaporHowe 12L vest:

Let’s start with the most obvious, the VaporHowe 2.0 LOOKS different from the original model.  Nathan went with a darker color (violet) which thrilled me, because I fall a lot, do a lot of random, stupid things (see alligator picture above) and am otherwise generally a dirtbag trail runner.  My original VaporHowe in the beautiful bright blue didn’t stand a chance at retaining it’s gorgeous color.  In fact, the original VaporHowe pictured is not mine, it’s a friends brand new one. Mine’s about 5 shades dingier. 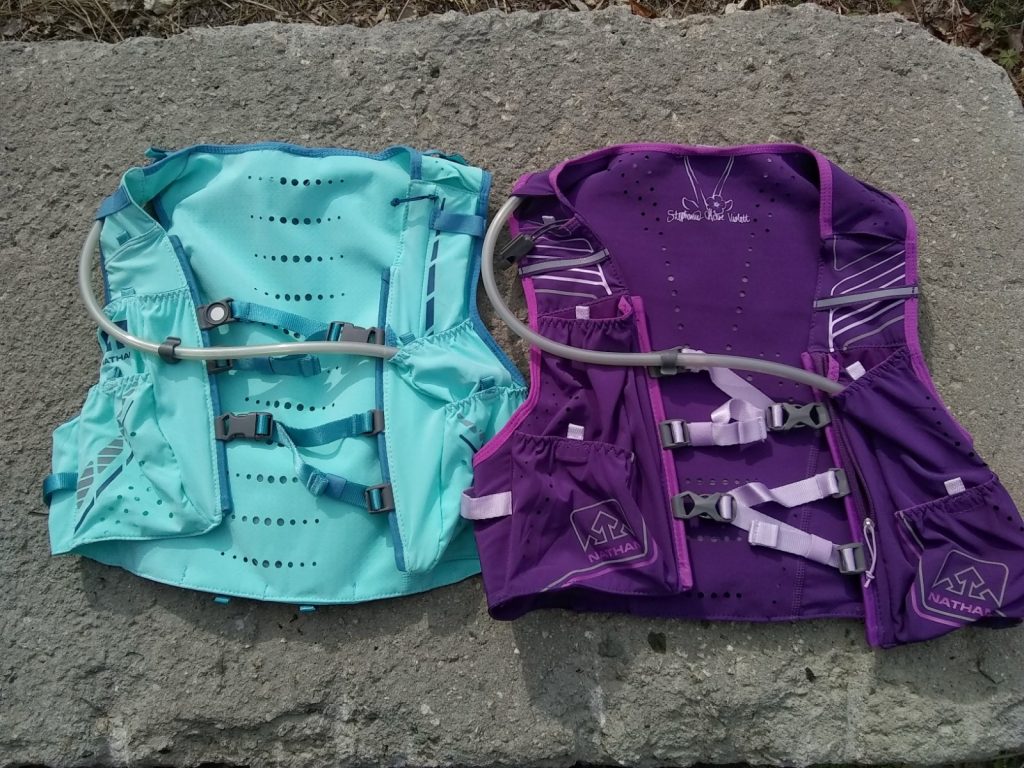 Original VaporHowe 12L on the left, new VaporHowe 2.0 on the right

The new VaporHowe 2.0 does feature reflective details on the back, similar to the original, however, the pattern and overall appearance of the logo is different.  Further, the reflective details are also featured on the front and the sides, providing 360 degrees of reflectivity. 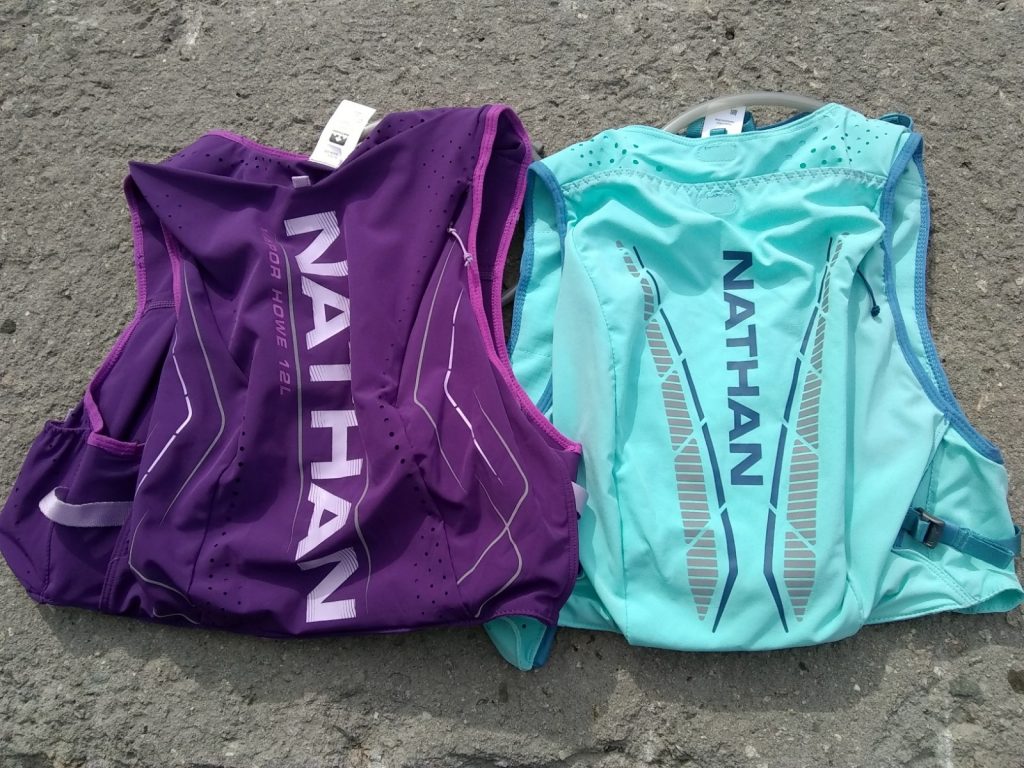 New VaporHowe 2.0 on the left, original VaporHowe on the right.

The 12L version of the VaporHowe 2.0 features a 1.6 liter IsoBound™ Insulated hydration bladder, where as the original VaporHowe 12L included a 1.8 L non insulated bladder.  Both bladders are hourglass shaped to help reduce sloshing. 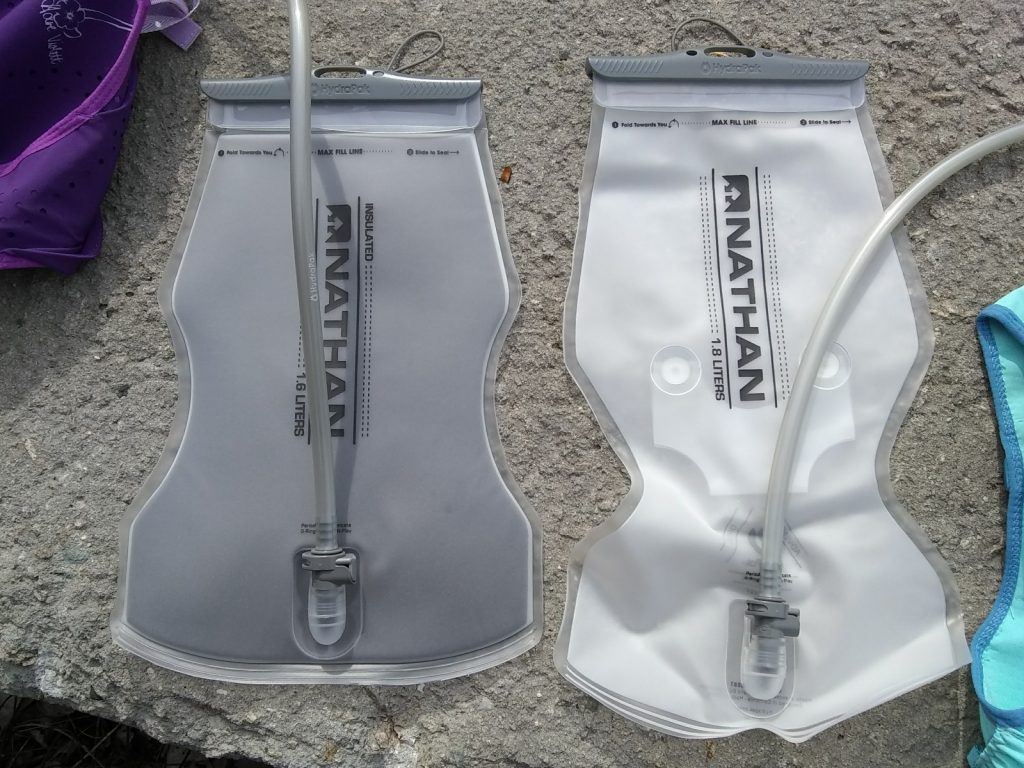 Nathan claims that the IsoBound™ Insulated bladder keeps fluids cooler 38% longer than non-insulated bladders.  Since it’s still March, I cannot confirm nor deny that. But get back to me in the sweltering, humid, South Carolina summers.   To be honest, I’m slightly concerned that the insulated bladder will actually create more heat on my back in the summer, with that insulated layer.  But this is yet to be determined.  Stay tuned. 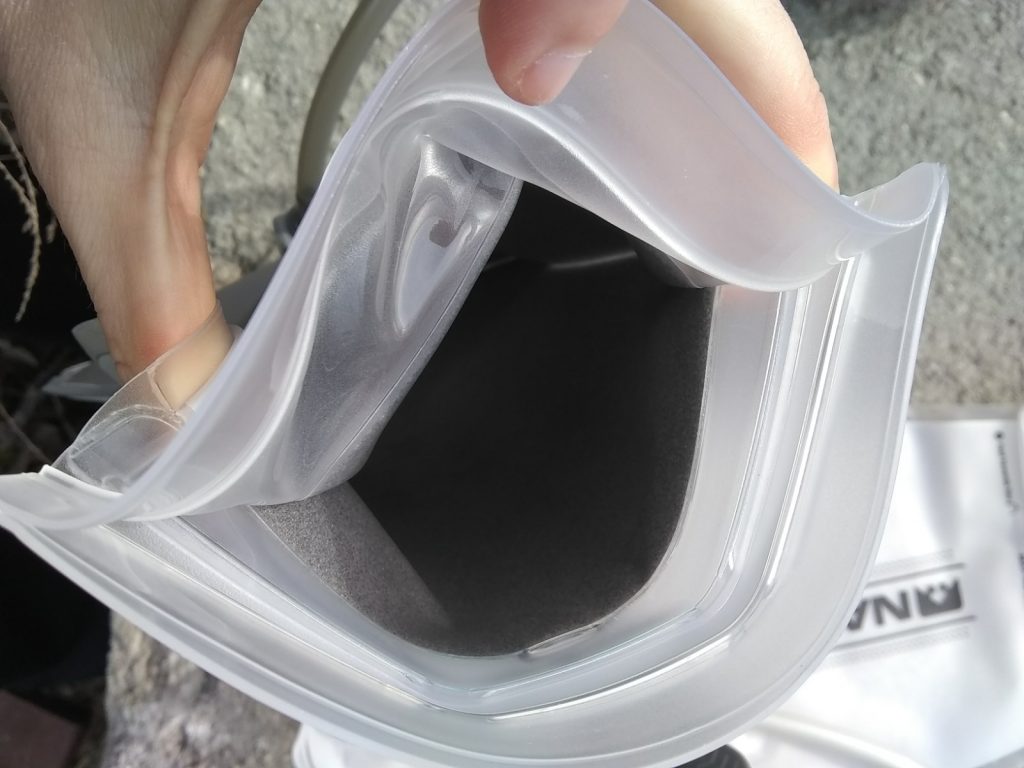 View of the inside of the insulated bladder. As you can see, the entire thing is insulated in order to keep fluids colder, longer.

The left side of the vest features a large zippered phone pocket. On the website, Nathan lists this pocket as water-resistant.  During a 20 mile long run, I chose to keep my car key/fob in this pocket.  When I pulled it out after the run, it was soaked.  I cannot deterime if the moisture came from sweat (on the inside layer) or from condensation due to a flask on the outside pocket, but either way, the key fob was definitely dripping wet.  So, keep that in mind when storing your phone in there.  I’m not sure if that was a fluke, or if this pouch is truly NOT waterproof.  However, a ziplock bag (or just a fancier, waterproof case on your phone) will easily solve this.

That said, the pocket is quite large, and I imagine could fit a phone of any size. 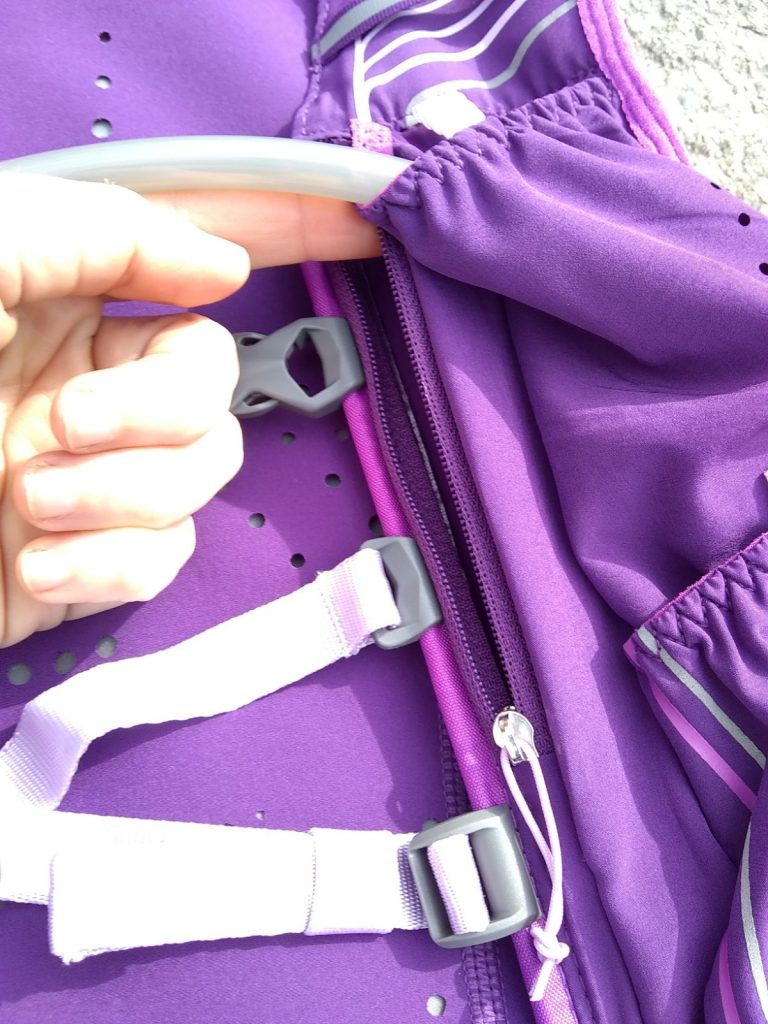 The shoulder zippered pill pocket featuring the safety whistle moved from the left side on the original vest, to the right side, and slightly higher on the shoulder, in the VaporHowe 2.0.  Further the zipper was removed. 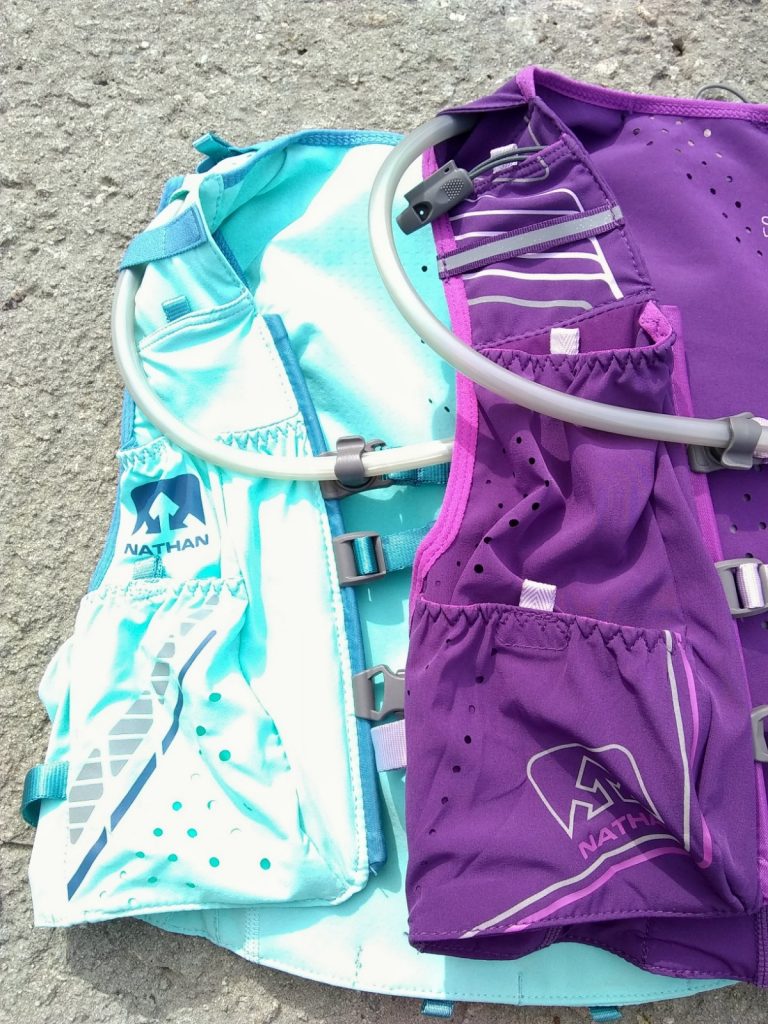 In the original VaporHowe, the main unzippered storage pocket on the back (separate from the pouch for the hydration bladder) was the entire  length of the hydration vest.  On the VaporHowe 2.0, it only reaches halfway down the pack.   My knee jerk reaction was that this would be a hindrance: I went to stuff my jacket into the pocket and was dissapointed when it only went halfway.  Then on second thought, I realized I might actually enjoy this. I USUALLY use this pouch to store extra snacks, and often have a hell of a time reaching all the way to the bottom to fish them out.  This simply means that I will need to utilize the large, zippered pocket on the back. 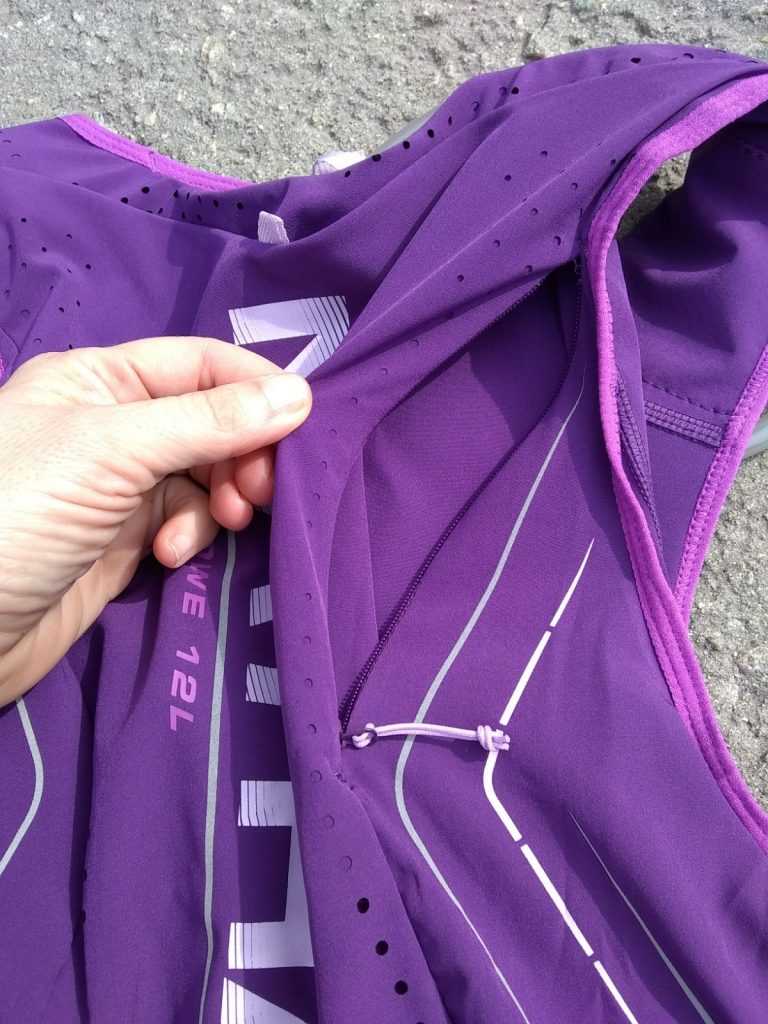 Back zippered pocket, that does go all the way to the bottom of the pack.

This is yet to be determined.  My major complaint about the original VaporHowe was that the fabric tore way too easy for a $180 vest.  I think that all of the ventilation holes on the fabric only contributed to the lack of durability.  On the VaporHowe 2.0, the ventilation holes are still present, but seem to be spread out a little more. Further, the pockets are not full of them, which means your snacks and other gear won’t be trying to escape through them 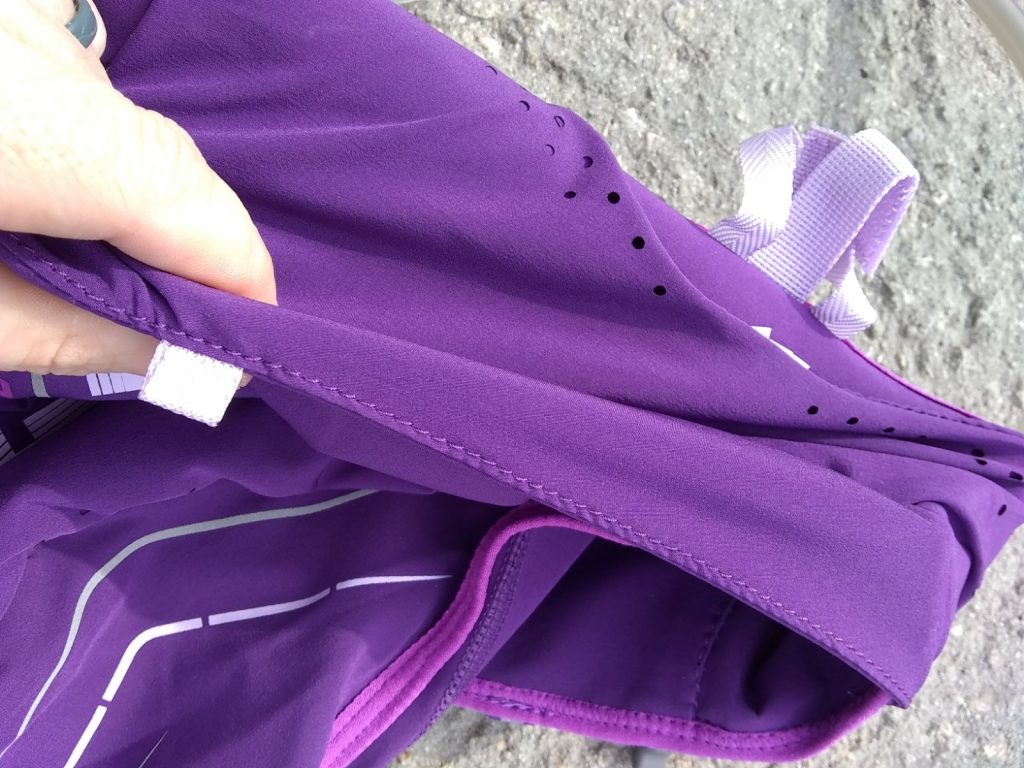 Thicker fabric? It’s hard to tell, though it does feel more durable.

The new VaporHowe 2.0 has everything I love about the previous model, with some minor changes that will hopefully only be beneficial in the long run (pun totally intended).    I’m really confident that the slight changes in fabric structure (like the location of the ventilation holes) will provide an even more durable product than the original VaporHowe, which truly was my number one complaint about it’s predecessor.

Now, let me get to a point I know some of you are certainly going to bring up: the cost.  Yeah, $200 is A LOT to spend on a piece of running equipment.   This is a classic case of “you get what you pay for”.  The original VaporHowe was hands down the best vest I’ve ever owned, and I definitely put it through the ringer with thousands of training miles, and atleast a dozen ultramarathons (including two 100 milers).  The fact that it was so lightweight, versatile, and didn’t bounce made it worth every penny.  Plus, I ran with it for two years, and to be honest, the original still has plenty of life left in it. The fabric and strap never stretched out, the fit is as good as it was the day I bought it.   I went through FAR more running shoes in that same time frame.

So is the VaporHowe 2.0 worth the investment?  In my mind, yes, a resounding yes.  It will be one of your favorite pieces of equipment in your running arsenal.

Disclaimer:  Nathan Sports Inc. provided the VaporHowe 2.0 to me at no cost, however, all opinions and thoughts stated are solely my own.