One of my greatest struggles in the sport of ultramarathon is getting out of my own head.  When things get incredibly tough, the negative thoughts in my mind begin as a snowball, then grow and grow until they end as an avalanche headed straight to DNF-ville.

It’s not often that I allow guest posts on Relentless Forward Commotion.  After all, you guys come here to read my rambling.  When Gary Dudney, long-time columnist for Ultrarunning magazine, runner of over 60 (!) 100 mile races, and published author reached out asking if he could share some insights on understanding the mind of the runner, I did not hesitate to say yes.   Teach us, oh wise one!   Please enjoy the following post from Gary. 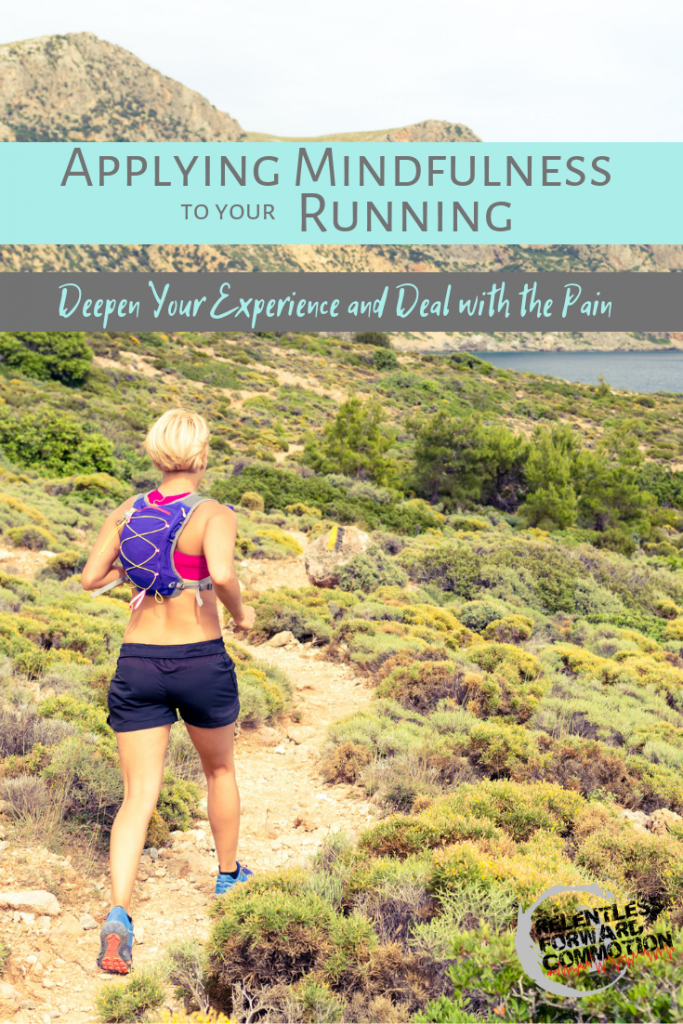 The word mindfulness has a sort of new-agey, pop psychology, touchy-feeley vibe to it, but what I discovered is that mindfulness is really pretty down to earth and straightforward. It relies primarily on a common sense understanding of how our minds work. From that understanding, a few mental techniques flow that are easy to learn and turn out to be just tailor made for runners and running. It’s no wonder you can’t swing a dead rat nowadays without hitting an article or a book devoted to how well the practice of mindfulness and running fit together like a hand in a glove (which you would want to be wearing if you’re handling dead rats).

The simple definition of mindfulness is “a focused attention on the present with acceptance.” The researcher who was largely responsible for popularizing mindfulness in the United States, Jon Kabat-Zinn, describes how ordinary thinking can be like thoughts, emotions, impressions, and sensations rushing through our minds “like a deafening waterfall.” The problem according to Kabat-Zinn is that we careen willy-nilly from thinking about problems from the past to worrying about what might go wrong in the future, and as we dwell on these things, we attach negative emotions like fear and regret to the thoughts, creating lots of unnecessary stress for ourselves. 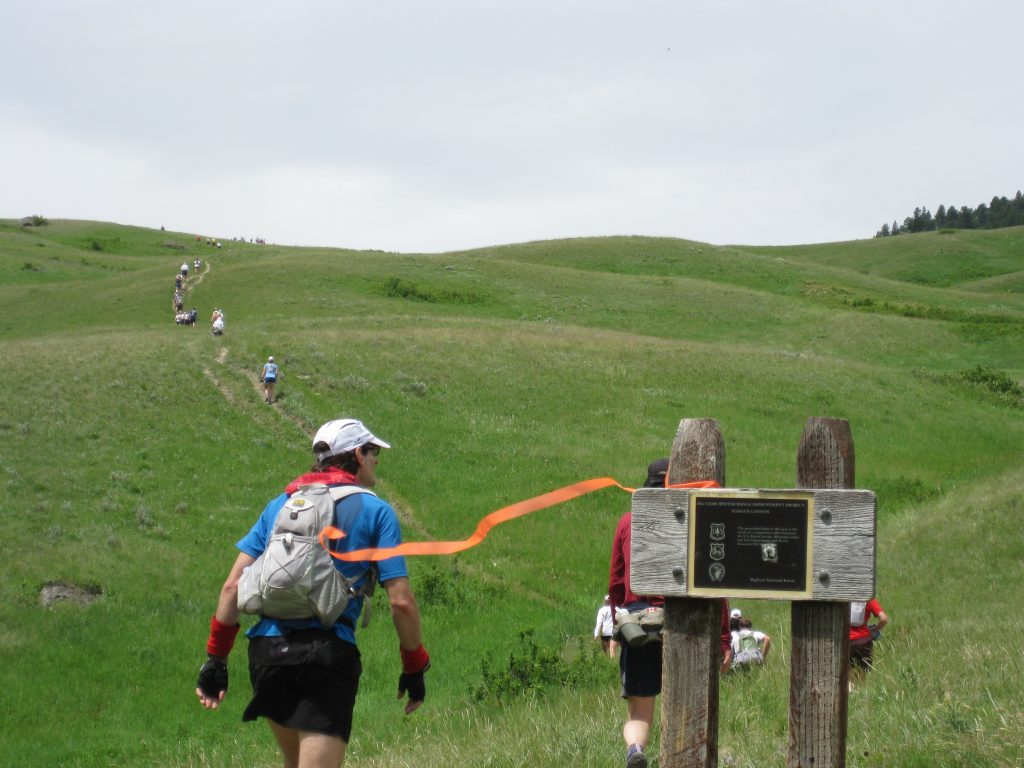 By being mindful, that is, by focusing our attention just on what we are experiencing in the present moment, we step out of the rushing waterfall of negative thinking, get off the mental roller coaster, and avoid generating the stress that comes from dwelling on our problems. The acceptance part of mindfulness comes when thoughts of past or future problems do bubble up in your mind. You acknowledge the thought but avoid “attaching” yourself or your emotions to the thought. Then you accept that the thought is there, but you consciously move beyond it and get back to your focus on the present.

A couple of things result naturally from the time you spend being mindful. One, you tend to really “live through” whatever experiences you are having at the moment and appreciate the richness of those experiences. Think of focusing on and really enjoying running through a forest as opposed to spending your entire run worrying about what someone said to you that morning. And secondly for as long as you are being mindful and staying in the present, you are getting a break from all the usual stress and anxiety you normally generate for yourself from dwelling on past and future problems. Much of your concern about the future is wasted anyway. As Mark Twain said, “I’m an old man and I’ve known many troubles and most of them never happened.” 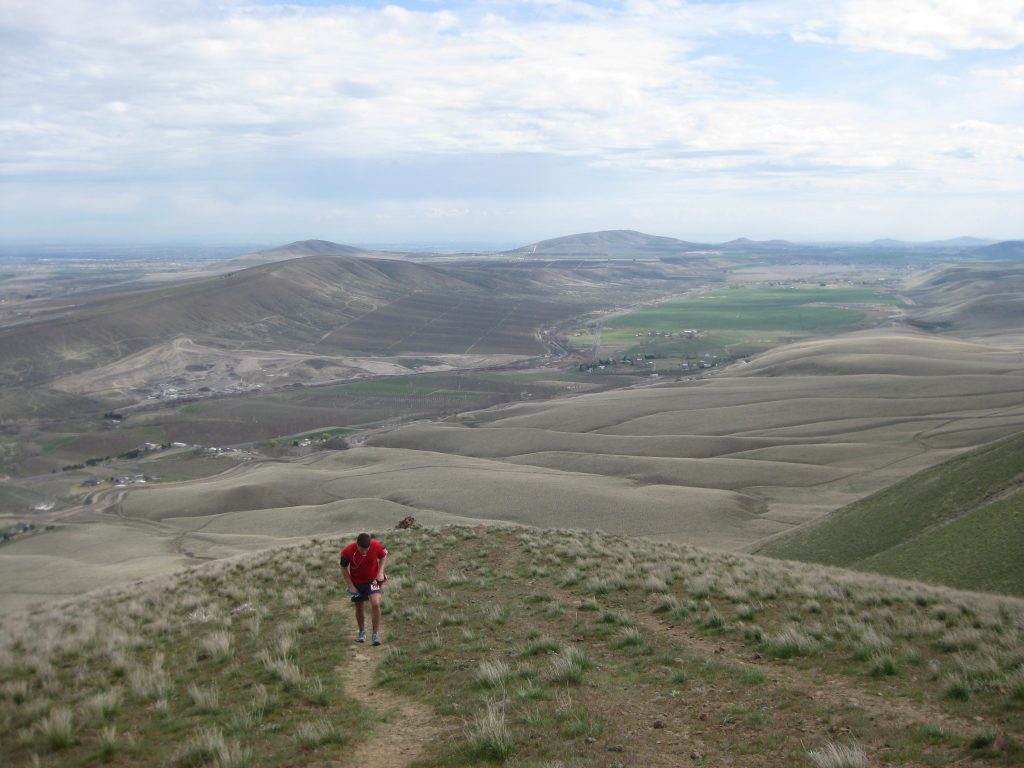 So how does this all connect up with running? Running by its very nature creates an extremely rich environment for focusing on the present moment. Not only do you have all the physical sensations going on in your own body, the breathing, the movement of arms and legs, the contact of your feet on the ground, the feel of the sun and wind on your skin, but there are all the constantly shifting sights, sounds, smells, and feelings of being outdoors and running down a trail or through a neighborhood.

Half the time when you’re running you get totally caught up in the experience without even needing to remind yourself to focus on the present. It just happens naturally. When a random thought about some problem at your work pops up in your mind, it sticks out like a sore thumb. It’s easy to acknowledge it and then move on. By really paying attention to the running experience, you deepen that experience. Your time running becomes a stress free zone. Worries aren’t allowed to intrude. At the end of the run, you feel great about yourself. You’ve done something for your health. You’ve gotten your exercise. You’ve improved your life and you can go back to your work recharged and ready to tackle the next challenge. 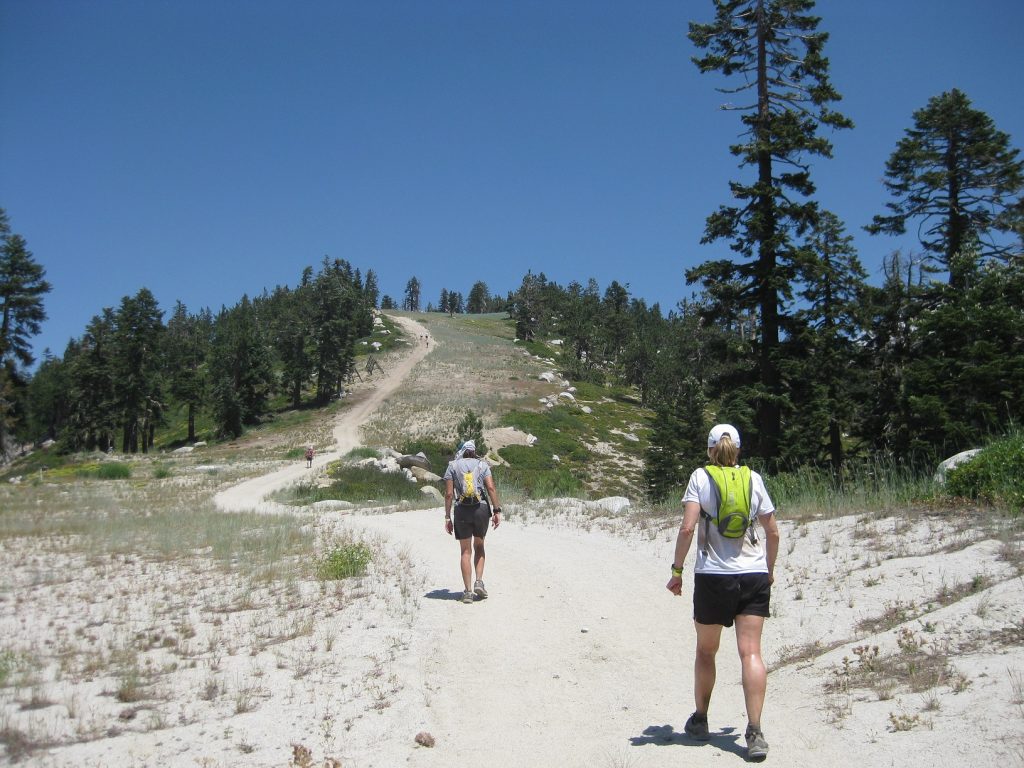 Mindfulness also provides an excellent technique for dealing with pain. In fact, mindfulness was originally developed as a way to deal with chronic pain. Running is going to involve some pain and suffering any time you push past your comfort zone, try to run a PR, or run long distances. When you first start feeling pain or fatigue or any discomfort, there is a tendency to try to ignore it or deny that it is happening. This reaction, though, just makes it worse. It makes the pain seem more menacing as if it were such a horrible thing that you can’t even confront it.

You are not, however, crouching in the bottom of a landing craft heading toward Omaha beach on D-Day, and the front of the boat is not about to swing down exposing you to machinegun fire. In that situation fear would be justified. In your situation, maybe you will have to deal with a sore ankle for a couple of more hours. This you can face. So rather than run from it, you want to acknowledge the pain and confront it directly, even sink down into it and try to experience it as fully and objectively as you can.

By facing up to the pain, you steal much of its power over you. By not fearing it and not letting it lead to self-doubt, you keep it from triggering a lot of negative thinking that will just cause you to tense up and make the running even harder. Instead, you can treat it as just one of many sensations that you are feeling. You want to give it a chance to recede into the back of your mind as you refocus on the present and all the other sensations, thoughts, sights and sounds that you are experiencing. 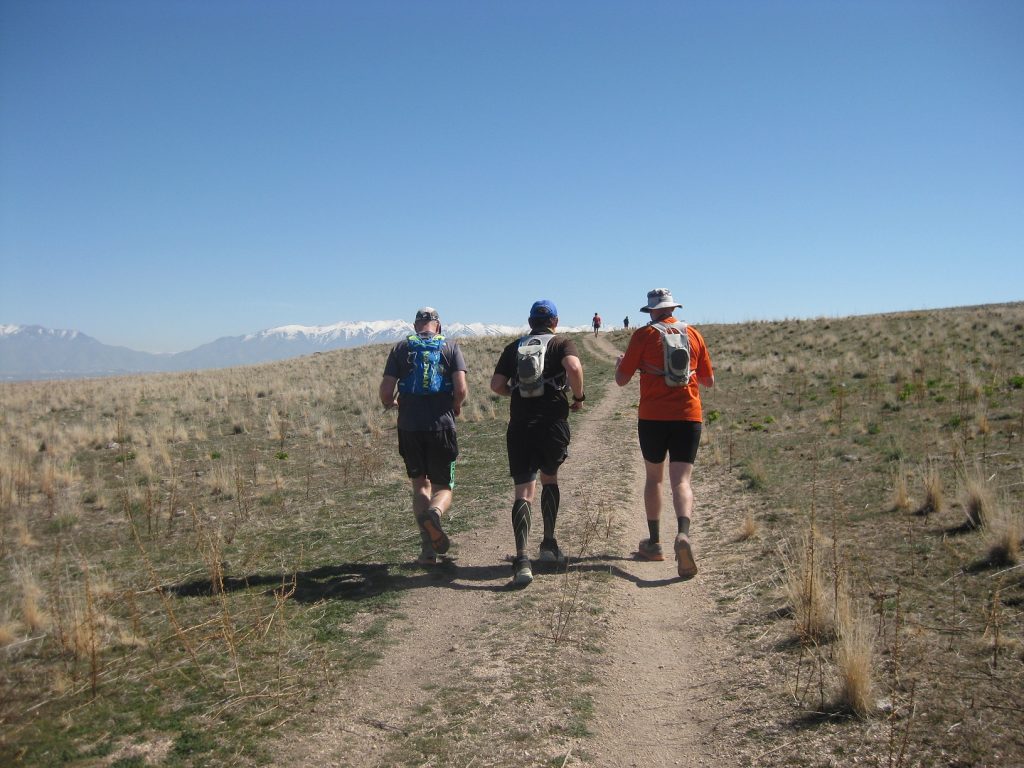 This technique for dealing with pain does take practice. I remember sitting at the prerace orientation for the Leadville 100 Mile Trail Race (“The race across the sky”) way back in 2003. The race director, Ken Chlouber, was famous for his colorful pep talks in which he focused on how bad you were going to feel about yourself if you should decide to quit during the race and not finish. Much to everyone’s surprise, he said, “And now I want to introduce you to someone who is just the epitome of Leadville tough,” and he asked Aron Ralston to stand up. Ralston was the very individual who had just become famous because he had had to severe his own arm off with a dull knife to save himself when he’d been pinned to a canyon wall by a dislodged boulder. There he was standing and smiling with a brand new prosthetic arm strapped to his shoulder. (He was there to pace a runner that year but the following year he finished the race himself.) Chlouber went on, “So when you’re out there whining about how it hurts and you want to quit…”

He stopped there. We could all fill in the rest, and I’m sure every single one of us walked out of there absolutely convinced we were never going to quit the race. How could you knowing what Ralston had endured? And yet as usual less than half the people who started the race managed to finish. More than half dropped out, notwithstanding Chlouber’s pep talk. My point is that you can feel a lot of conviction about what you are going to do when the pain gets intense and the chips are down, but it is only in the actual moment when you are faced with a dire situation that you find out really how you are going to react. 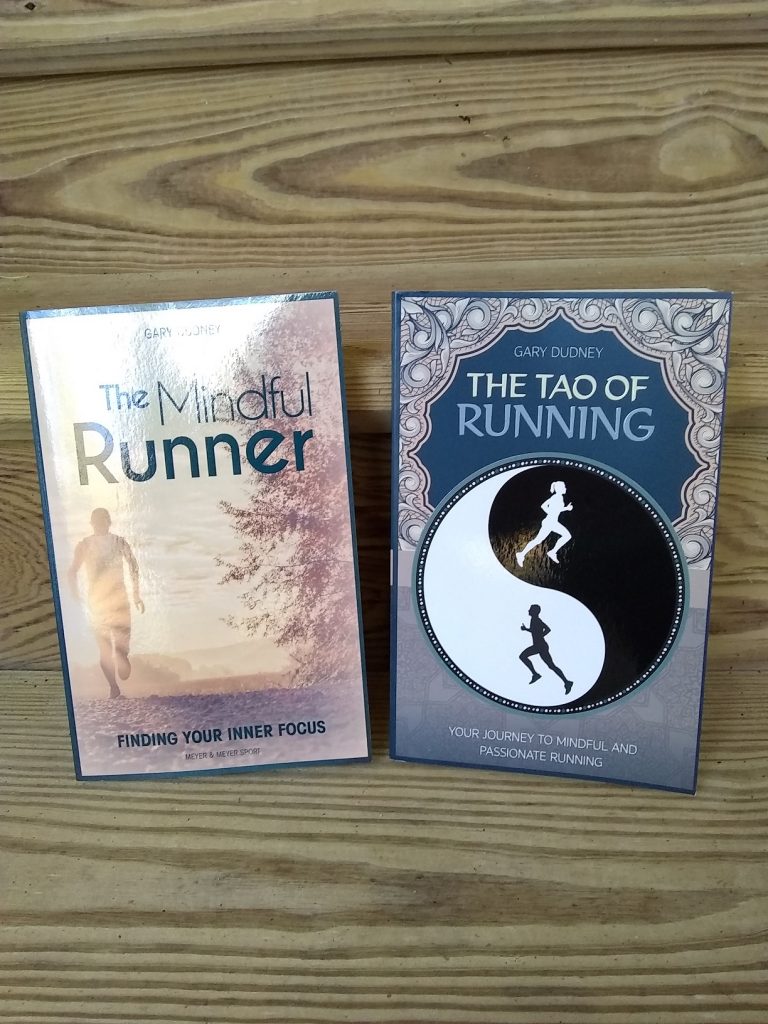 Practicing applying mindfulness techniques to your running, especially during workouts when you are really pushing yourself, pushing the pace, or going longer than your usual distance, helps. Then when you’re faced with a tough situation in a race, the whole process of confronting the pain, accepting it, and moving beyond it will be more familiar and hopefully more effective.

Have a look at my books, The Tao of Running: Your Journey to Mindful and Passionate Running and The Mindful Runner: Finding Your Inner Focus for much more on using mindfulness to tough out difficult running situations. You’ll also find a lot of other suggestions for how to think your way to more fulfilling and enjoyable running. Meanwhile, I would tell you to be mindful out there, but you probably already are. You just didn’t know it.