I might just have this triathlon thing in me after all.

So, as I mentioned in the last post, the local, super enthusiastic and fast growing triathlon group decided to put on a free race.  Sprint or Olympic, your choice. Complete with timing and photographers.  Myrtle Beach triathletes seriously rock. But back to the story.

I slept a total of 3 hours last night before waking up at 4 am to get ready for the race.  Breakfast with an obligatory facebook check (in case some of you were wondering why you had 4:15 am return messages from me, haha), dressed, load the car, and go.  I had no idea where I was going, as I had yet to show my face at the group open water swims.  But I found it without any problem, and was really glad I showed up early.

Because I busted the tube on my back wheel.

No, not a flat per-se, but in the still-rising light of 5:45 am, I lost the little twisty thing that goes on the end of the valve and doesn’t normally come off (not the plastic one, but the tiny metal one, and yes twisty thing is the technical term) and the next thing I knew, all the air in the tube deflated and the valve just completely disappeared.  And not only was it flat, and I didn’t know how to change it, but I had no idea how to get it off of the back with all of the gears and stuff.

My goodness I need a “bicycles for dummies” crash (NO pun intended) course in the worst way.

I felt already defeated at the triathlon I was already a nervous wreck over, and it hadn’t even started yet. In my lack of sleep and nerves, I mumbled something to my friend Dawn about how that was a sign and I should just quit now. Or just swim and run. Or just run. Or maybe just go home.  I reluctantly headed over to sign my “if the alligators get me and/or I simply can’t swim 750 yards, it’s no one’s fault but my own” waiver, and when I came back, Dawn had brought me Rosann, Ironwoman to my rescue.  She changed my tube, and gave me a mini lesson while she did it.   Thank you, thank you thank you!
I BARELY made it to transition in time to sign in, as everyone was getting the final race instructions. Of course, I was the bad student and had to ask  “what did he say? where do I turn around? what’s going on?” as I scrambled to lay out my transition.

Finally, we headed down to the water. My goodness the turnaround buoy 325 yards away looked like it might have been a mile away.  I freaked out inside (surprise surprise) and was very excited when I heard a group of women say they were just going to cut the swim short, and another saying she was just going to do laps between shore and the 25 yard buoy  (keep in  mind, not an official “race-race”, and I was NOT competing).  I chose option C.  50 yard laps, so I could quit whenever I felt necessary.

We all got in the water, and I assured the lady who took one look at me and said “go ahead, you are way faster than me” that Team Trakkers gave me this uniform for heart, and not for speed, and that she should go ahead of ME.  Trust me woman.    There was a count down, a horn was blown, and THEY went.  I took my sweet a$$ time, as seen below.

So, I got in the water, on my own time, and swam in my own direction.  I wasn’t quite alone, I swam with Kim.  And dare I say it, but for not swimming since March…it wasn’t THAT BAD.  And what’s more, is I seemed to have automatically developed this sighting technique.  Three breaths, sight on the fourth. Three breaths, sight on the fourth.  The Tri-Gods must have taken pitty on me and given me that talent, because not only have I never practiced it, but I was all OVER the place at Iron girl last year.   But I’ll take it, and pray that this new skill wasn’t a one-time thing.

I did a total of 150 yards. Three laps. Laugh if you will at a measly 150 yards, but for the girl who didn’t even WANT to get in the water, it might as well hve been 150 miles.  Technique wise, I felt really good! Strength wise, I better get back in the pool!   On the third lap I started to get really tired, but what’s more, is I started really looking around in the water, and that’s when I remembered, I’m terrified of alligators.  It’s the northern girl in me, the only thing I ever had to fear in fresh water up north was maybe a curious blue gill nibbling on your toes.  Leeches? Pluck them off.  Snakes? Whatever.  Sharks? I really don’t bat an eye.  But alligators? Noooo thanks!  They assure me there are no gators in this pond, but any body of water like this in Myrtle Beach, I’m just going to go ahead and assume COULD have a gator in it. Heck, the pond next to the mall randomly has gators in it, and if I was an alligator, I’d sure as heck chose this beautiful pond over polluted mall puddle any day.

So anyway, when the whole “what was that? Did I just see shadow?” got in the way of focusing on breathing, I decided to call it quits.  I hung out by the edge of the water for a while.  Some other people, who also didn’t do the full 750 yard sprint /1500 full also got out of the water, and we moseyed on over to transition.  Non-racing-racing is kinda fun! 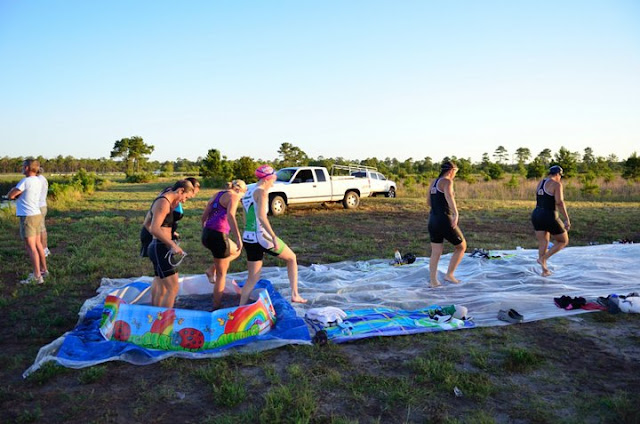 I took my time heading over to transition and getting onto my bike. Again, I wasn’t here to push myself or race anyone. My bike still makes me nervous, so I’m serious, I REALLY took my time. Especially since I had to clip in and ride up this giant hill (in Myrtle Beach, all over passes are considered “giant hills”)
﻿

﻿ I clipped in, didn’t fall, made it over the hill, and then, another crazy thing happened.  I felt…good. Confident and strong. And so even though I was going to “take it easy” I turned it up a few notches. Not all out racing or anything, but I started passing people. One by one.  Sorry people I passed, but DAMN it felt good. Especially considering this was like the 4th time I’ve ridden this bike since I got it in March (isn’t that disgusting? I agree, it’s disgusting.  Rectifying that situation ASAP, I swear).  The bike and I clicked.  12 miles came and left before I knew it.  And really, it was before I knew it, as I purposefully left Garmin at home.

The ONLY thing I didn’t do was go into aero. Not once. Yeah, it was slightly uncomfortable, and yeah I need to grow some cycling gonads. One thing at a time. I was having a good day, I didn’t want to ruin it.
﻿

After the high of the awesome bike ride, I had a little more pep in my step and zoomed through transition slightly faster. Still nothing speedy, but a little bit of hustle. And then I ran.  3.1 miles down a dirt road.  Well, it started as dirt, but towards the turnaround, was deep sand, and it felt like running on the beach. It was the run that made me realize “Oh yeah, you’ve been a slacker lately”.  But it still felt good to pass a few more people.  I can tell myself ALL DAY LONG that I’m not competing, but the thrill of competition never disappears completely.

I won’t lie, I was glad to be done when I was done. I was BEAT. As I crossed the finish line, I made sure the timing lady KNEW that I didn’t do the whole swim. Even though it wasn’t a race-race, I didn’t want any bad triathlon karma haunting me (because I would have been marked down as 4th place female, hahaha), so I ‘fessed up.

I stood around transition/finish line cheering people in for a while, high on my “hey, I can probably do this after all” endorphins, when my friend Dawn came into T2 (she was doing the Oly).  She said “come one, run with me” and so I did.  I could tell in her face she needed some distraction.  I took off with her thinking, “no problem, I got your back tri-buddy! ” but about a quarter mile in, my body just started laughing at me and screaming “woman, you are lucky you made it this far completely untrained, don’t push your luck”.  So at about a half mile in, I bid her farewell. Sorry Dawn, I know you needed someone at that point to push you, but I didn’t have it in me! I ran BACK to the finish line for the second time, where I felt like a dufus while the timing dude tried to clock me again, and the guy with the camera took more “finishing” pictures, haha.

All in all, it was a PERFECT day.  The weather was AMAZING, considering it’s normally 150 thousand degrees in the summer in Myrtle, so it was a nice change to be COLD getting out of the water. And frankly, I’m glad I got it over with.  Not the triathlon itself, but the leap into getting BACK into triathlons.   Like I told my mom on the phone after the race…it was like going to the dentist.  You freak out about it, but when it’s over you realize “hey, that wasn’t so bad after all!”  Except way better than a good day at the dentist.

And best of all, I pushed myself way , WAY out of my comfort zone, and came out on top. That is the BEST feeling.

Here’s to the next 11.5 weeks of 70.3 training. This is going to be crazy…but I’m finally ready for the challenge!