Yesterday, I cautiously brought out my pageant err little leauge uhh runner mom self and brought my 4.5 year old to the Grand Strand Running Club’s first ever kids running program(part of RRCA’s “Kids Run the Nation“). If you are new here, let me go ahead and inform you: out of my two sons, I’m pretty sure the 4 year old would rather eat brussel sprouts and visit the dentist instead of “race”, as he has demonstrated by screaming his little head off at previous (apparently not so fun) fun runs. For a more in depth analysis of the race day freak outs, read this post from last summer.

But back to the running group. From the start, I tried to talk it up…how EXCITING it was going to be to see his “friends” (i.e. anyone under the age of 7, even if they’ve never met before), to run around with the other kids, to spend special time with mommy. He wasn’t buying any of it. Told me he’d rather play Legos. Hang out with dad. Eat a snack. Take a nap (seriously? What 4 year old WANTS to take a nap?) So I dropped the conversation every time. I know when to pick battles with a preschooler and when to leave well enough alone.
When Monday arrived and it was time to get ready, I played the “let’s get in the car” trick. Little boys love cars. “Heeeeey let’s go for a CAR RIDE!! Just you and Mommy, won’t that be fun?! And we can go grocery shopping, you can be my helper and put food in the cart! Oh and chicken, let’s go out for dinner and get some chicken!! cough cough *afterwegotoyourrunningprogram* cough oh hmm sorry something got stuck in my throat. Let’s go!”
From that point on, the odds were stacked against me. He was thirsty, and the Lightning McQueen water bottle I brought for him “wasn’t the right one”. He was hungry, and didn’t want the snack I brought for him. Then, just as we were pulling into the field, I noticed he was passed out COLD in his car seat. Awesome. Waking Rowen up is like waking a grizzly bear from hibernation. I ALMOST turned the car around, but didn’t want to be responsible for my son being a quitter on the very first day of his very first official “sport”. Besides, his “coach” was former Olympian Zola Budd (Pieterse), we couldn’t miss that!
I carefully pulled his limp body out of the car seat, and whispered to him in a voice that would rival one of the members of the fresh-beat-band while I told him how incredibly super-duper-fantastically-awesome this was going to be (exclamation points just oozing from my voice). He replied bluntly: “bring me home”. But I persisted, I carried him across the parking lot, across the street, and to the field. I held him as the group congregated. I let him bury his head in my shoulder as he refused to say hi to or acknowledge anyone else. I spoke for him as the group went around introducing themselves.
But then something started to happen. As the other kids started talking about running, answering questions asked to them about running, his head perked up. With each kid jumping around and answering enthusiastically, I felt his grip release a little, until eventually, he was standing on his own.
And when it was finally time to run…he took off with the group. Looking over every few seconds at first to make sure I was still by his side, and then eventually, taking off without me. He ran when he was told to run, walked when he was told to walk, and sprinted as hard as he could when told to do so. He huffed and puffed at times, as a 4 year old’s little legs clearly weren’t built for endurance (even when endurance means 30 seconds), but he charged forward with a tenacity that rivals that of people ten times his age. Never once complained of being tired, never once complained of not being able to keep up with the bigger kids. There were even a few “come on, mom!”s thrown in there, as my 48 hour post marathon legs were clearly not fast enough for him.
When it was all over, my previously cranky, timid little preschooler was beaming and talking non stop. He didn’t even hesitate when I instructed him to go and thank one of his coaches, Ms. Christine. He bounced and skipped and jibber jabbered away, asking about street lamps and automatic doors at grocery stores and “when do we get to do this again?”. He sang in the car, told his dad as soon as he got home that “jogging means don’t run SUPER fast!”, and proceeded to share his Legos with his little brother. Yes, you read that right, he was NICE to his brother.
The runners high strikes again, today’s victim: 4 year old Rowen.
I often joke about being a pushy sports mom, but in reality, I won’t do that to my boys. While I’d be over the moon if they took up running or triathlons, I’ll be just as happy to sit on the sidelines of a soccer or football game, attend a cub scout meeting, science fair, or watch a chess tournament. I just want my boys to be happy and thrive.
But for now, I will rest assured of one thing: that day, running put a smile on my kids face. I’m one proud running mama 🙂 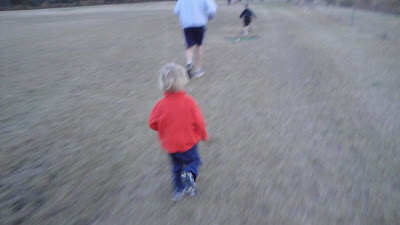