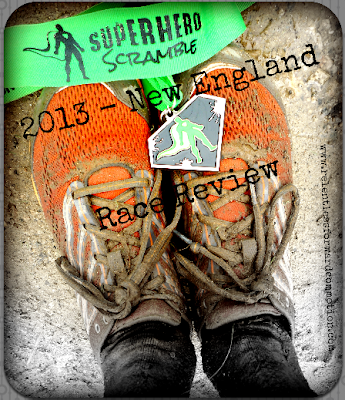 As the old adage goes, if you don’t like the weather in New England, wait five minutes, it will change.   New England certainly did not disappoint with its finicky weather as the Superhero Scramble made its Northeastern debut.

(**This is yet another long winded review, if you want the overall good/bad quick version, scroll to the bottom**)

Saturday morning we woke up bright and early to get ready to travel to Amesbury, MA for the race, only to find out that the race directors had delayed the start by three hours due to tropical storm Andrea dumping buckets of rain over the vicinity.  I for one was thrilled with the delay.  I would far rather have the race delayed rather than canceled altogether, and further, a three hour delay meant a predicted forecast of sunny and high sixties, versus the current pouring rain and low fifties.    Plus, I got to go back to sleep for another few hours, and I’d be lying if I said that wasn’t a bonus.

So, a few hours later than expected, we landed in Amesbury Massachusetts.  Well, sort of.  We were directed to park at Seabrook Park in Seabrook, NH.   I’ve come to realize that paying for parking at obstacle course races has become one of those necessary evils, so I might as well accept it; and this time, it was another $10.   We were immediately able to jump on a shuttle (school bus) that dropped us off just feet from the registration tents, about a ten minute drive away.    Registration was quick and easy, volunteers were incredibly helpful.  We were given the usual: a timing chip and a race bib, and then sent into the park.
I was stoked (as I always am) to be a part of the NewEngland Spahten team, which on this day, was the largest registered team at the event.  Therefore, we were given our own VIP tent, which meant we were all able to avoid the baggage check ($5.00).


Unfortunately, the race was delayed even longer, and the elite heat/first wave of the day was delayed almost another hour, from 12:15 to just after 1:00 pm.  While the delay certainly was unexpected and undesirable, I have to say that the staff and volunteers of Superhero Scramble did an absolutely fantastic job with the situation.  This delay could have easily spiraled into a chaotic disaster, but everything about the race, from registration to the finish line, was impeccably done.

In it’s third year, Superhero Scramble has joined the big leagues of obstacle course racing by offering three different distance events.  The New England event would be the shortest distance, a “Charger”” 4+ miles and 20+ obstacles.   Like Spartan races, if you miss an obstacle, or choose to skip it, you must pay a penalty: 10 burpees and 10 super spins.  What is a super spin, you ask?  Here is Hobie Call,  arguably one of the best obstacle course racers on earth, demonstrating:

To enter the  starting corral, you had to jump over a wall.  I’ve seen this at other races before, but I think it is just a fantastic extra touch.  Might as well know from the start what you are up against.

Due to the multiple delays, it seemed that a large majority of racers went in the first few waves, therefore by the time we were in the starting corral, it didn’t feel overly crowded.  Maybe 100 or so racers.   Our wave started off with the emcee yelling “SUPER” to which we replied “HERO” a few times, then we were off.  Obstacle #1 of the day (I consider it an obstacle) was to run up a decent sized hill, then down, then back up again.  The terrain was pretty rugged, with a few retaining walls added in for good measure, and therefore, bottlenecks and single file lines ensued. Thankfully, these would be the only lines we would encounter all day. 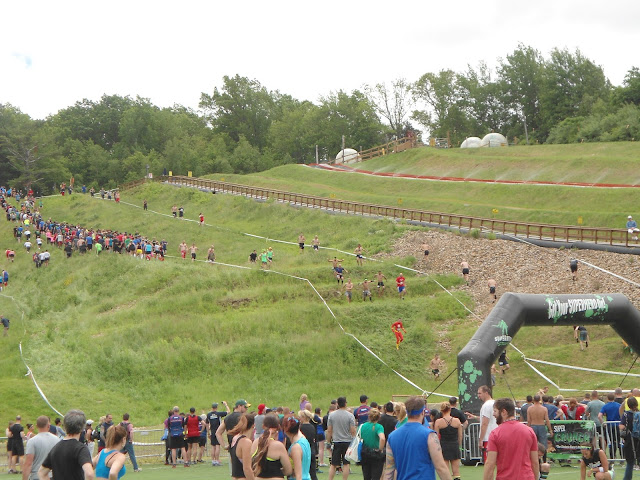 At the top of the last hill, we hit the first true obstacle: a cargo net climb up, across, and back down.  This was where the race indeed bottle necked, and this was the longest I had to wait in line all day. 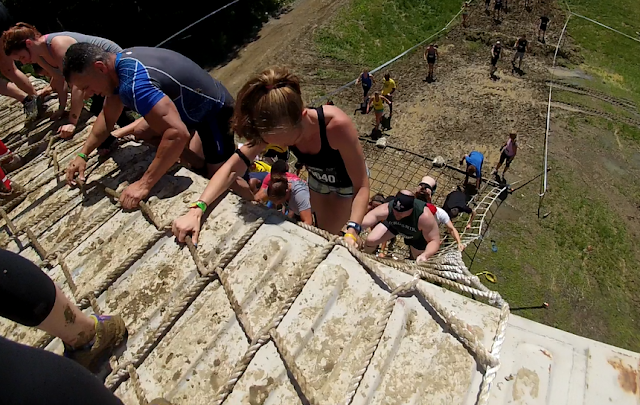 After the cargo climb, it was time for some trail running.  This is where the crowd thinned out, and where Geoff and I were able to put some distance between us and all of the participants in our wave.  Unfortunately, this is where I also realized that the whole time delay caused me to completely forget that I skipped lunch.  You would think after 31 years in this body, I would have learned how to deal with my blood sugar issues, but the excitement of the day got in the way.  It was this early in the race that I realized I would NOT be pushing myself, instead it would be a battle of the blood sugar to just get myself to the finish line in one piece.
So anyway, there was alot of running on the first stretch, occasionally broken up with high barbed wire crawls: I was able to complete them either squatting very low or on my hands and knees.  No belly/army crawling necessary.   If you have ever participated in a race at Amesbury Sports Park, then you know the terrain and the trail. I recognized a lot of it from last summer’s New England Spartan Sprint.

Eventually we left the woods and came up to an obstacle known as the “Leap of Faith”.  Due to recent, and unfortunate news surrounding the death of a participant at a recent Tough Mudder on an identical obstacle (Tough Mudder’s is called “Walk the Plank”), Geoff and I had discussed earlier the possibility of skipping this obstacle.   When we got to the obstacle, however, I noticed how incredibly controlled the situation was.  The water pit at the bottom, while still 15 feet deep, was significantly smaller in diameter.  Two lifeguard at the top and one at the bottom were strict and diligent with the flow of participants: only two racers at a time could jump, and ONLY when told to do so by the lifeguards.  Noting the extra precaution they were taking, combined with the fact that I was really hot and would love to cool off in some water, I decided to do the obstacle. When my turn came, I asked the lifeguard for one extra safety precaution, and requested I jumped alone.  They obliged, and down I went.   The water was refreshing, and in the end, this obstacle turned out to be one of my favorites. I’m glad I didn’t skip it, and I’m thankful for the Superhero staff for keeping us safe.

To be honest with you, the low blood sugar left most of the rest of the race a little blurry.  Thanks to the GoPro, I have photographic evidence of what events came next.  But instead of give you a blow-by-blow of every obstacle, I’ll share pictures and highlights  If you have any questions about specific obstacles, by all means, ask in the comments section below and I will try my best to answer them.  I will say that Tropical Storm Andrea certainly contributed to the course with extra mud and water, in places where you could tell it wasn’t planned.
Within just a few hundred yards of the finish line came the toughest obstacles of the day for me.   First was a rope climb.  Ropes haven’t been a problem for me for quite some time now, I usually climb them with relative ease.  Today however, would be a different story.  I was fatigued and suffering from low blood sugar, and also, picked a rope with knots, which are a huge hindrance using the rope climbing technique I so often chose (using my feet), and hurt even more trying to climb down (rope burn on the thighs!).  The best part of the rope climb, other than reaching the top, was that it went under the first obstacle of the day: the cargo net climb.  It was pretty awesome climbing the rope while having strangers cheering me on from above 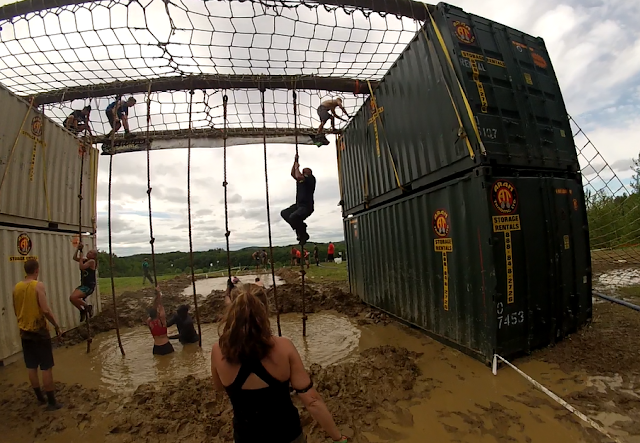 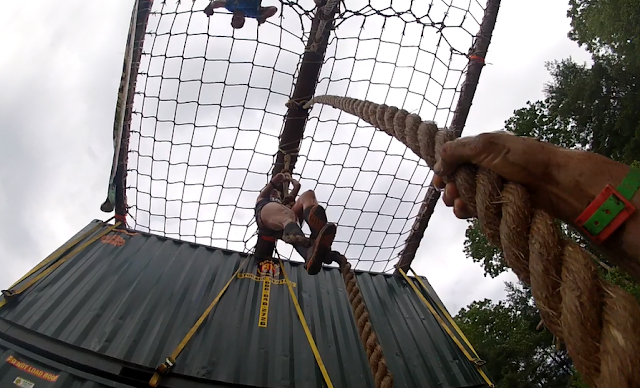 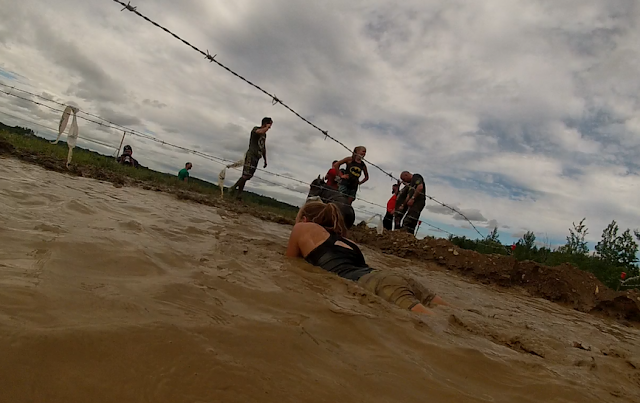 And then the worst obstacle of the day.

At other SuperHero Scramble venues, this is where the giant slide into a pool of water/green slime  It looks like this:

At our location, they appeared to forgo the pool, and instead we got this:

Here is the video, first of Geoff, then of me :

It hurt. It hurt so much it took my breath away.  I slid at least half the distance of the slide on the gravel/rocky ground, and it tore me to pieces.  My butt cheeks currently look like an angry tiger mauled them.  Thankfully, that was the extent of my injuries; as it turns out, others broke bones on that slide.  Needless to say, it was shut down shortly after our heat when it became apparent that the slide was becoming too dangerous.

Last came a massive, slippery wall known as The Beast. 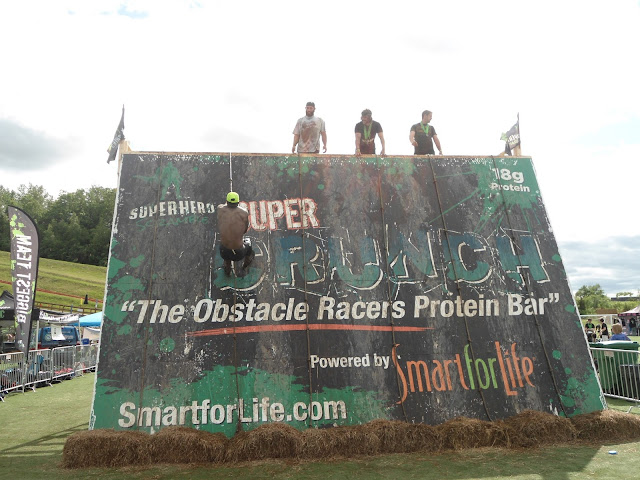 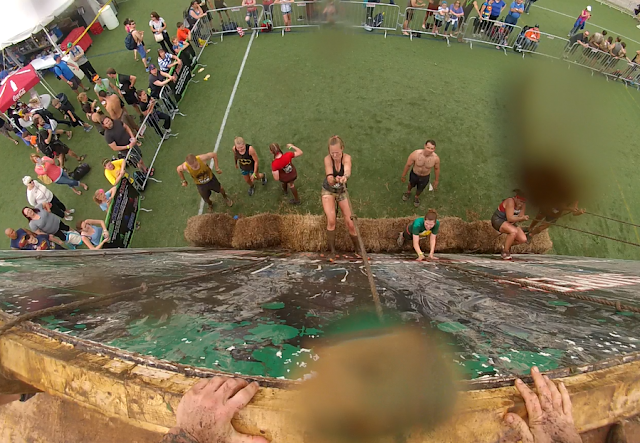 And then the finish line, complete with volunteers trying to knock you down (look familiar?) 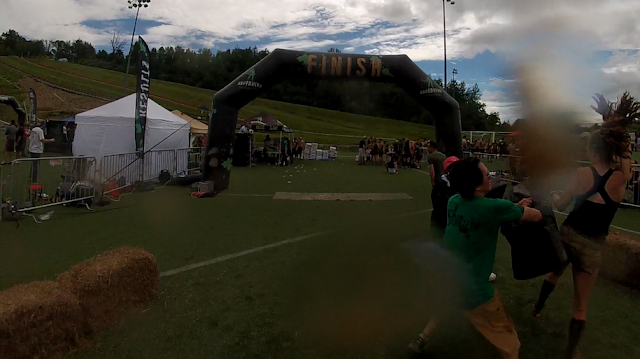 Other than the slip-n-slide that left me with no skin on my butt, this race was awesome.  The Superhero Scramble staff and volunteers put together a flawless race, especially considering the forced delay.  The course was clearly marked, the obstacles were well staffed, there were little to zero waits at the obstacles.  My only semi complaint would be a lack of originality: while this course was indeed FUN, every obstacle I encountered I had done before at another race.  While I don’t necessarily suggest completely changing the obstacles (as I understand some obstacles, like barbed wire crawls, walls, and sadbag carries are almost an OCR necessity), I would have loved to see them a little more “Superhero” themed, even if it was only with creativity of signage.  Something to make it feel different from everything else available on the obstacle course racing circuit.

On a scale of 1-5 of difficulty, I’d say this particular race ranked about a 3.5.  The terrain (and mud) certainly added to the difficulty, and a few of the obstacles (such as The Beast) were certainly not for beginners.

The swag was great, a unique medal that distinguished the year and race distance (though not location), and a generic Superhero Scramble t-shirt.  Also, your bib entitled you to one free beer at the finish line.  There were showers, though no changing tent, to rinse off the mud and put on dry clothes.  A band at the finish line played music, there was plenty of food available for purchase.  I heard that spectators had to pay $20 for entry, which in my opinion was a bummer, since there wasn’t alot to do nor much of the course to see from the finish line area.
All of that said, I thoroughly enjoyed my first SuperHero Scramble event.  I would absolutely recommend this race, and I look forward to doing some of their longer distance races in the future.
Want to find a Superhero Scramble near you?  Check out the upcoming events page, and be sure to enter code “RUNFASTERMOMMY” at checkout for a discount on registration! 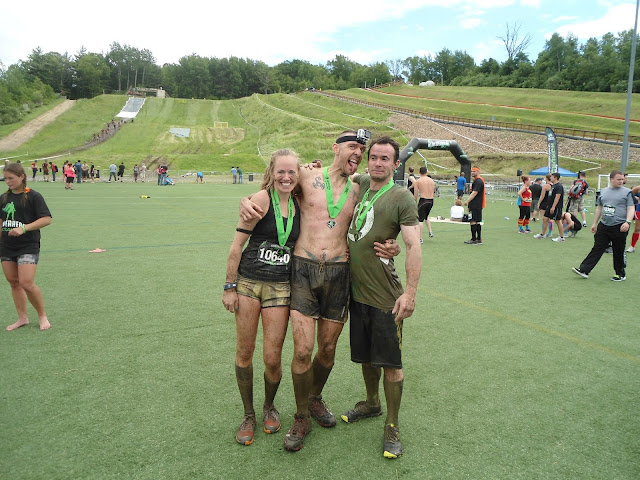