The fact that life often changes in the blink of an eye both terrifies and excites me.    Though chaos is often viewed as stressful and undesirable,  I personally prefer the pandemonium over the same old pattern of day-in-day-out monotony that so many of us are often stuck in.  And as I finally sit down trying to sum the week up in written word, all I can say is that it was anything but monotonous.  A whirlwind.

And because of said whirlwind, I have some random-life-rambling to do.  Sometimes I simply have to empty the thoughts before I can get back to work.

Last Sunday I embraced the warm (which of course is relative, but in this case we mean “not yet freezing”) weather and went for a ten mile run.  Though I felt fantastic, I forced my legs into a slow and steady pace, thinking once again of the impending 50K (that is coming up on us in less than a week).  Though walk breaks haven’t been implemented in my training or racing in years, they will most certainly be essential during the 50K, a crutch to help compensate for my lack of training.  Not for lack of trying mind you, just for lack of timing.   I wanted to incorporate a few walk breaks during the ten miler, so I did exactly what one should do when running through the streets of Vermont…

… stop to pet all of the farm critters. 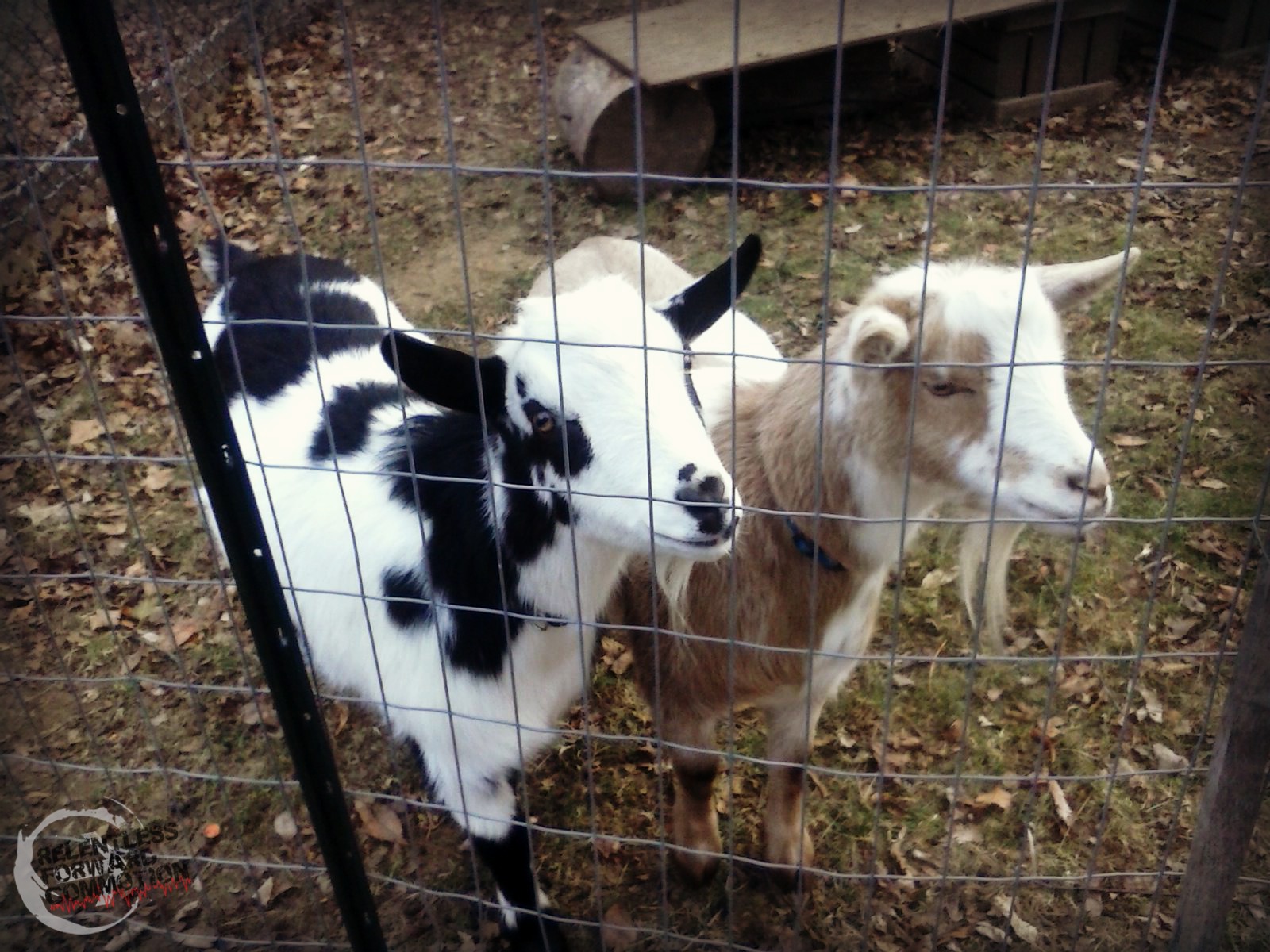 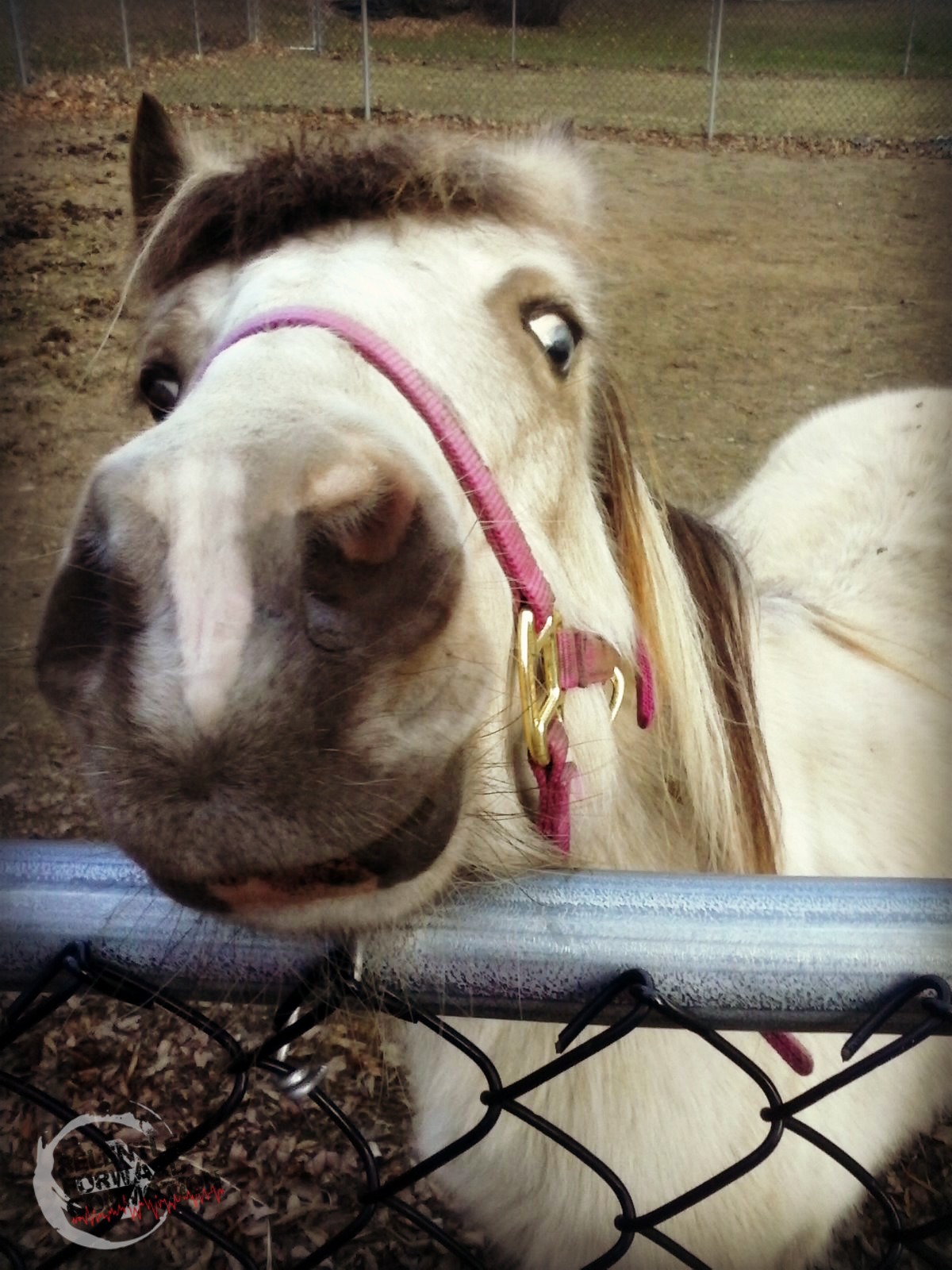 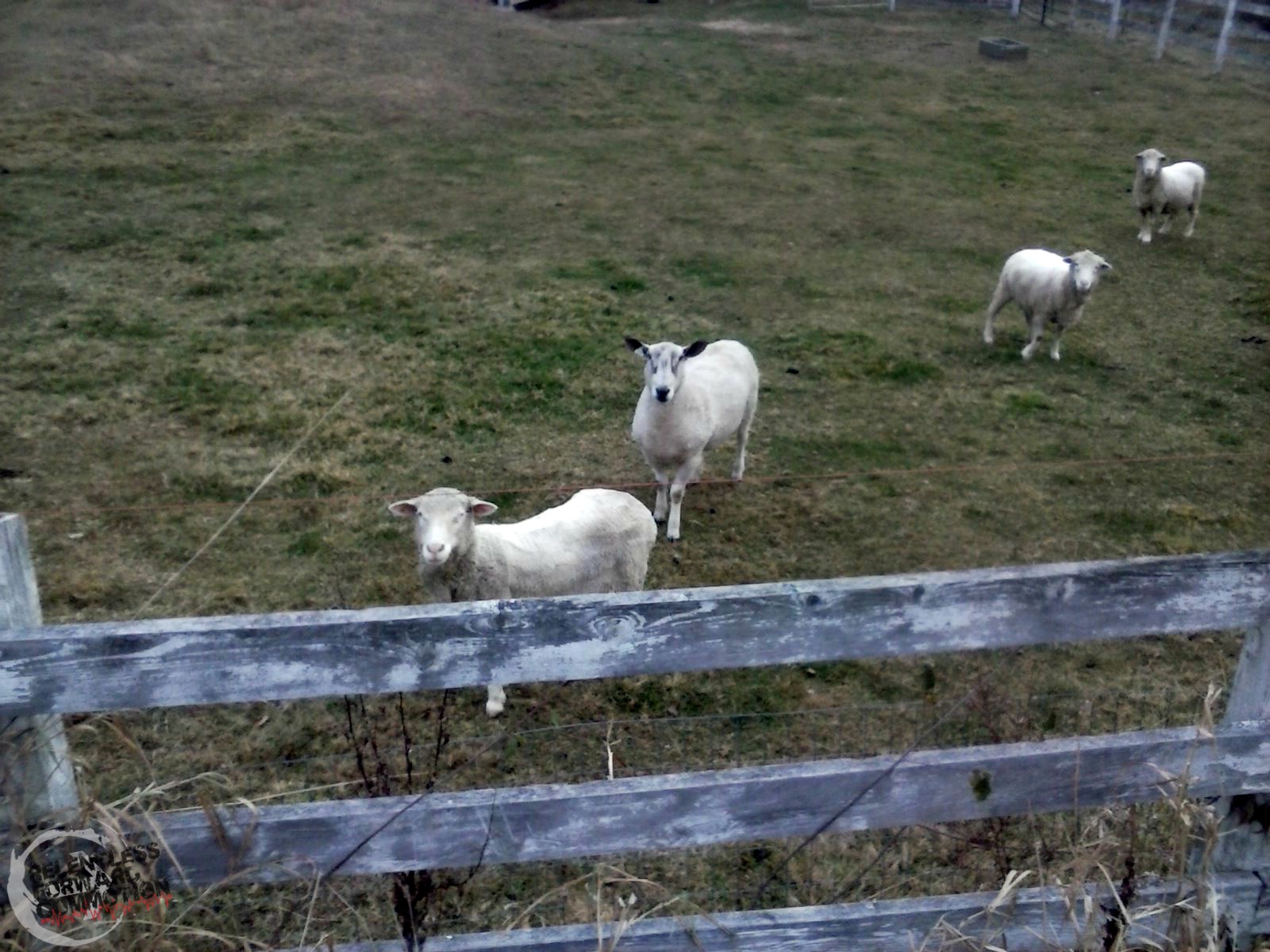 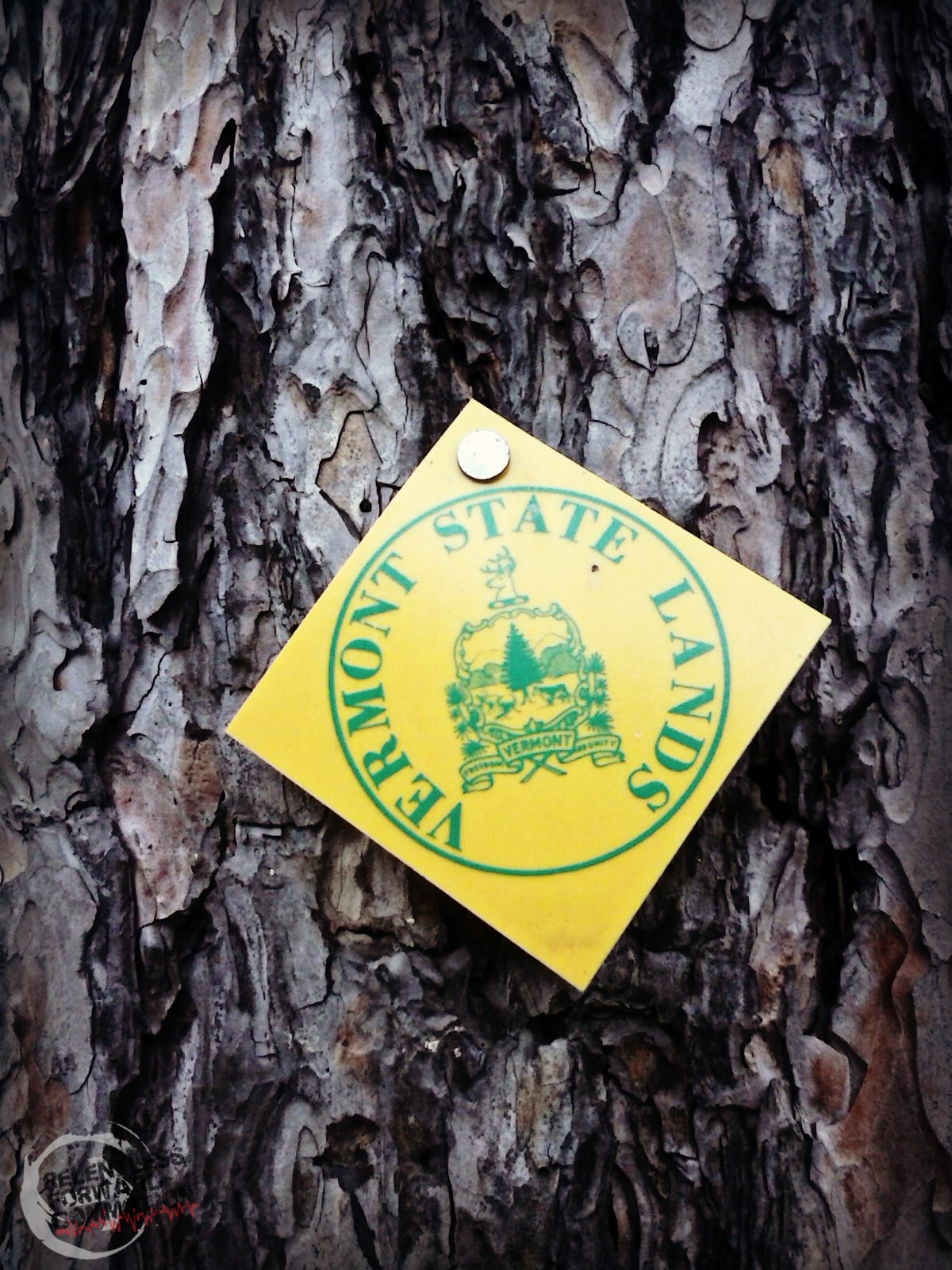 Cows, llamas, sheep, goats, and a really sweet pony were all visited by this reluctant break-taker.  The poor pony seemed a little peeved that he/she walked all the way over to the fence to greet me, and I didn’t reciprocate the effort by handing over some sort of snack.  I made a mental note to pack a few carrots in the pockets of my hydration pack for the next run.

Later that afternoon we headed south to Massachusetts to join our friends in a crazy 5 mile run of both trail and city streets. Though I had felt fantastic after the 10 miler, my legs ached and screamed with fatigued protest during the first mile of this second run.  Luckily we (the tired muscles and I) settled in and relaxed quickly, and I was able to add a bunch of race pace intervals in for a grand total of 15 miles for the day. 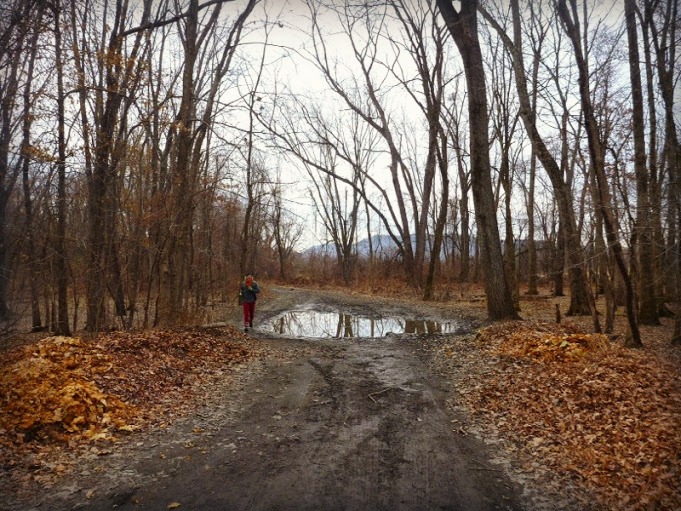 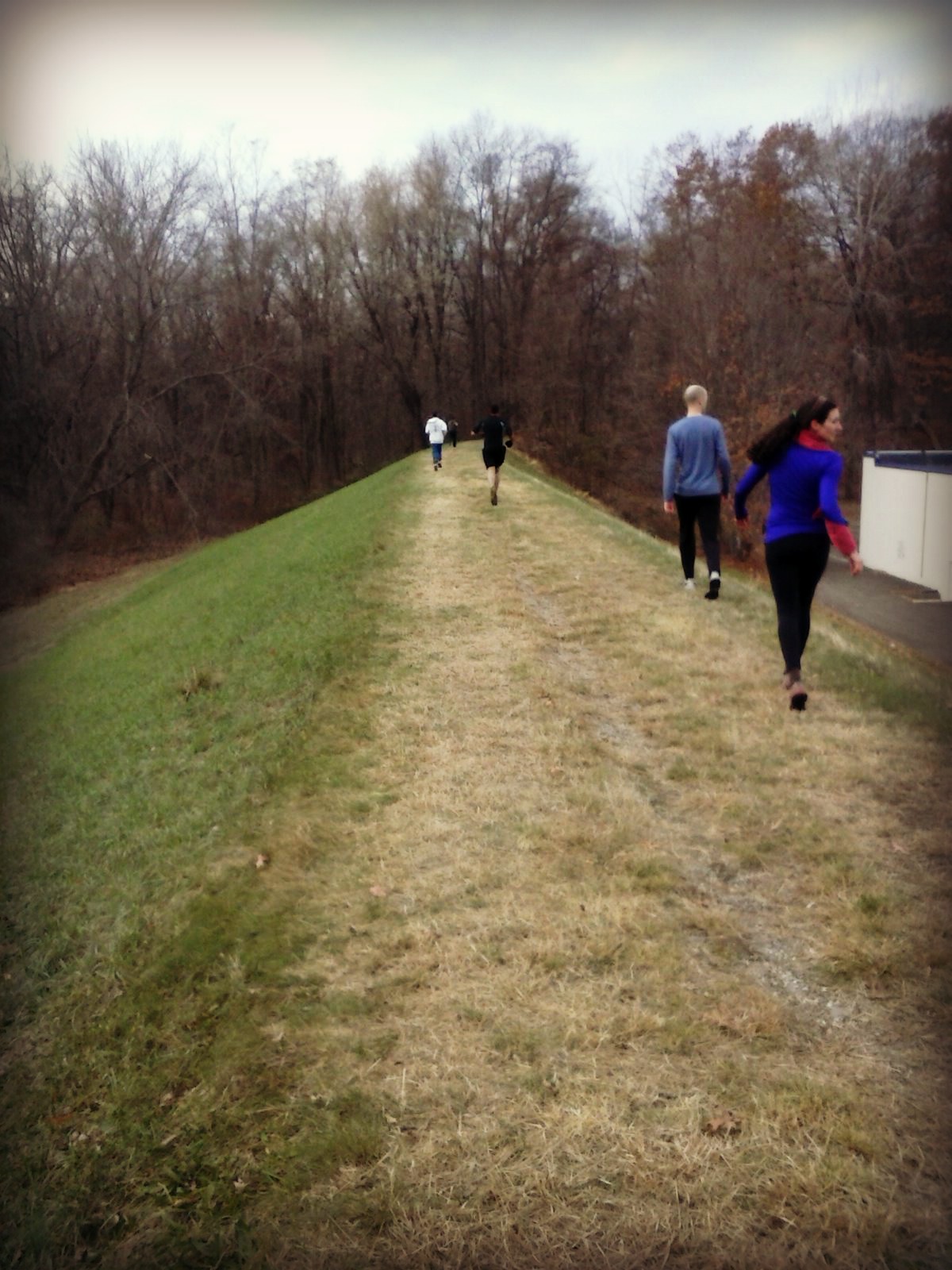 And then Thanksgiving week hit.  A bunch of 12 hour work days at the gym sandwiched family time, my brand new laptop crashing and thus a return trip to the store, the big Tofurkey feast, and somewhere in there, Vermont turned into a snowy wonderland.  Ready or not (I’m never ready) winter had arrived.  I’ve promised myself, a notorious winter hater, that I would embrace the cold weather and snow this year. So we skipped our local turkey trot and went for a family snowshoe excoursion instead.  How fortunate are we that this is literally our backyard? 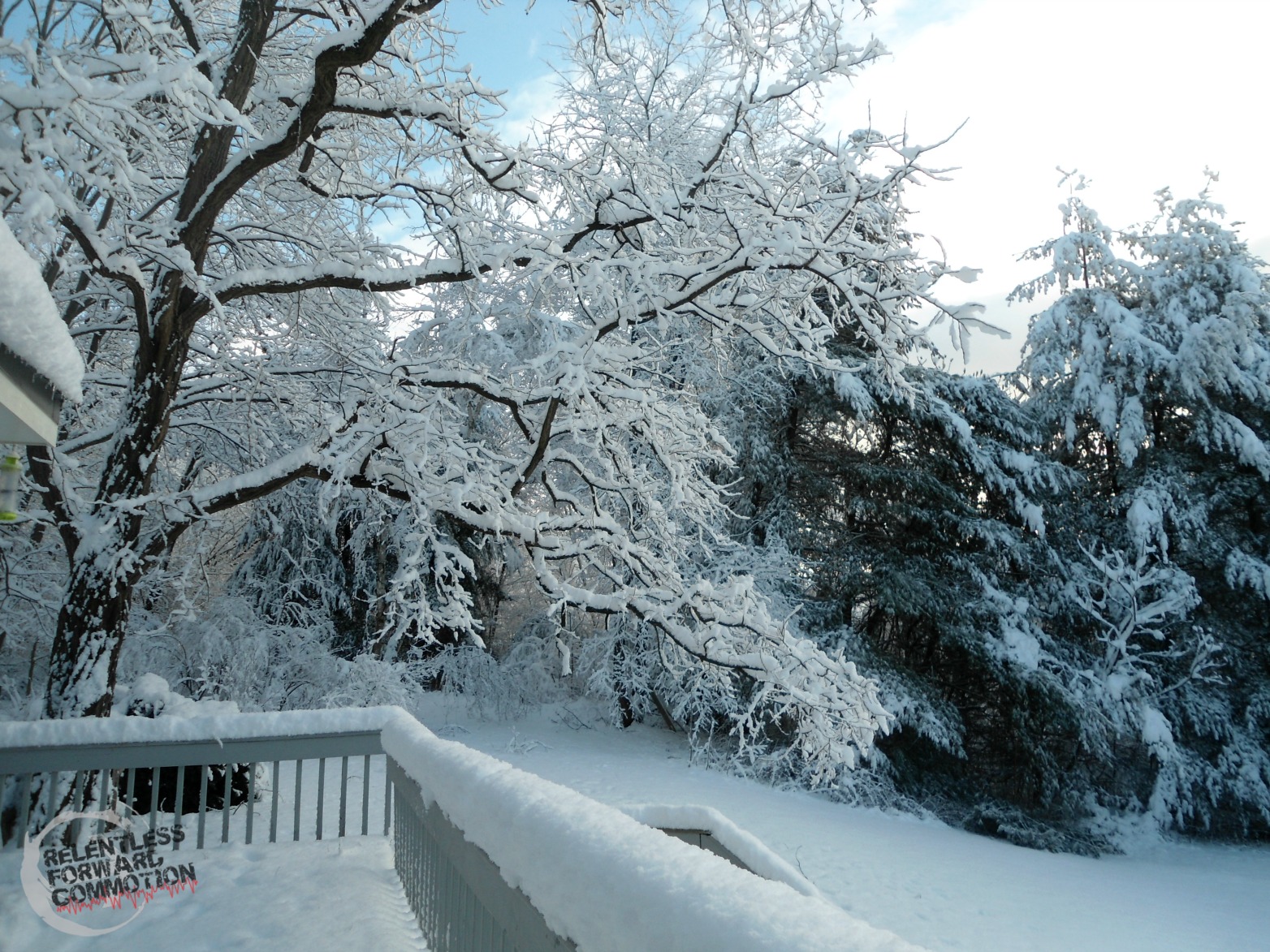 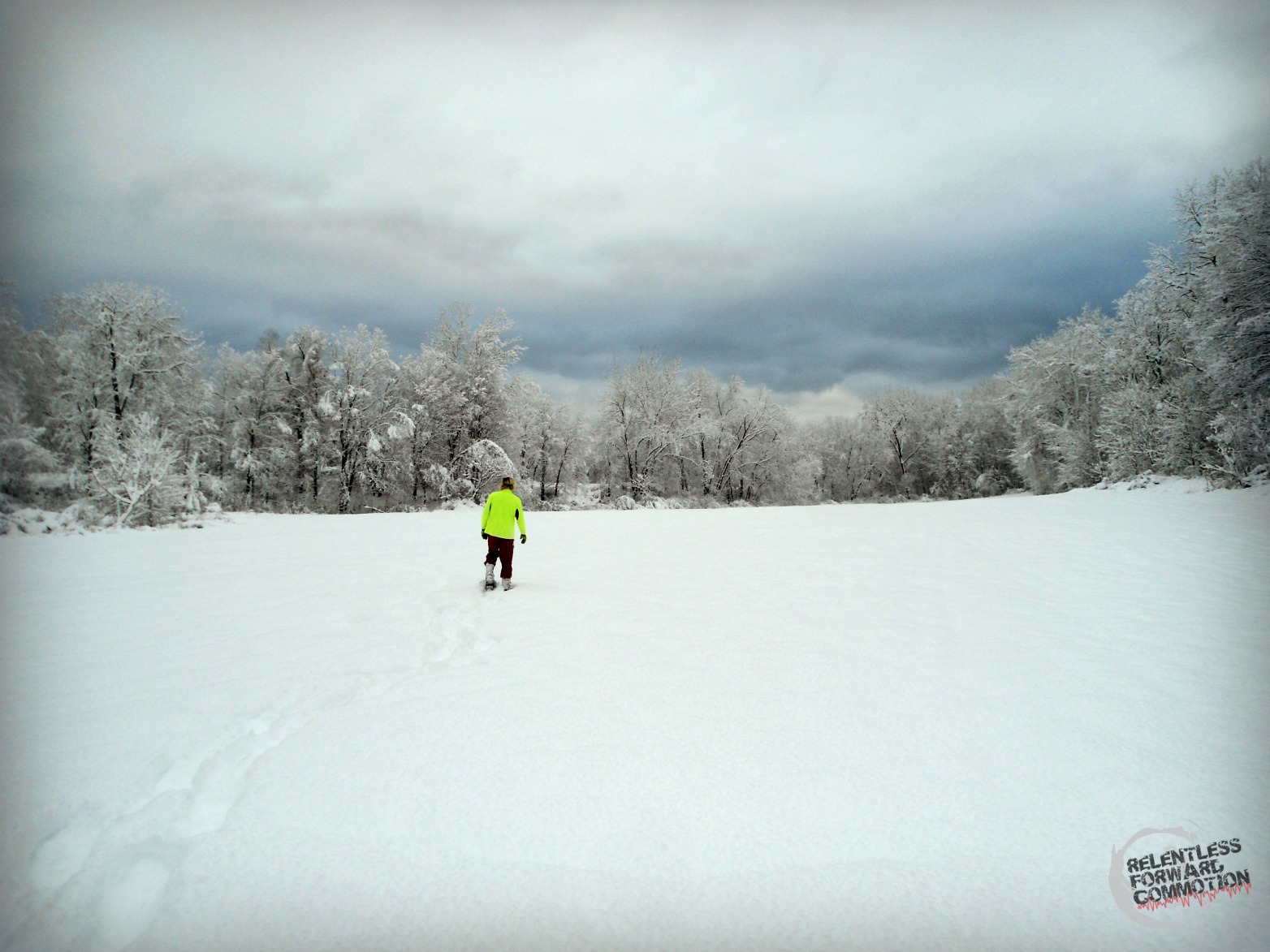 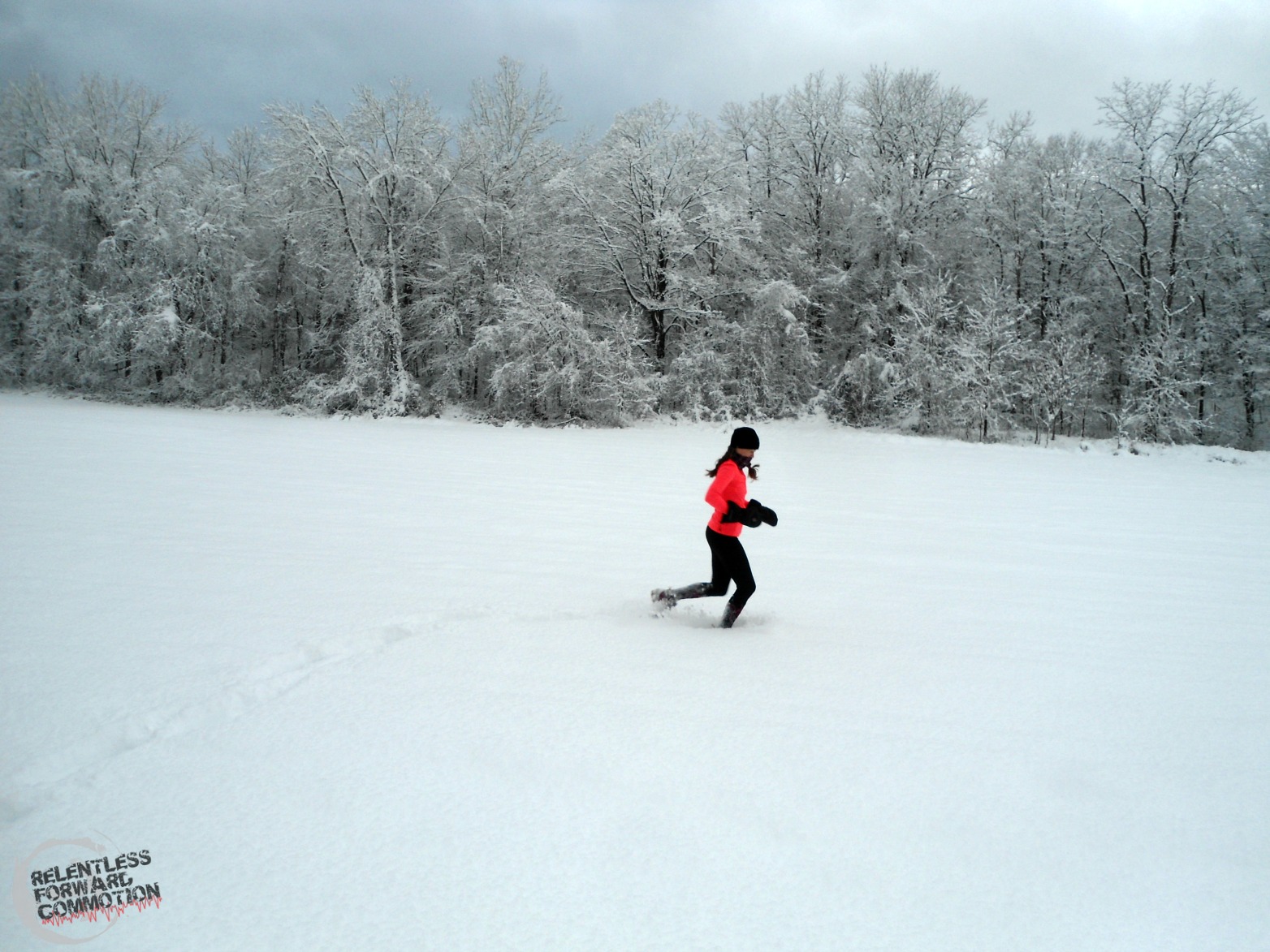 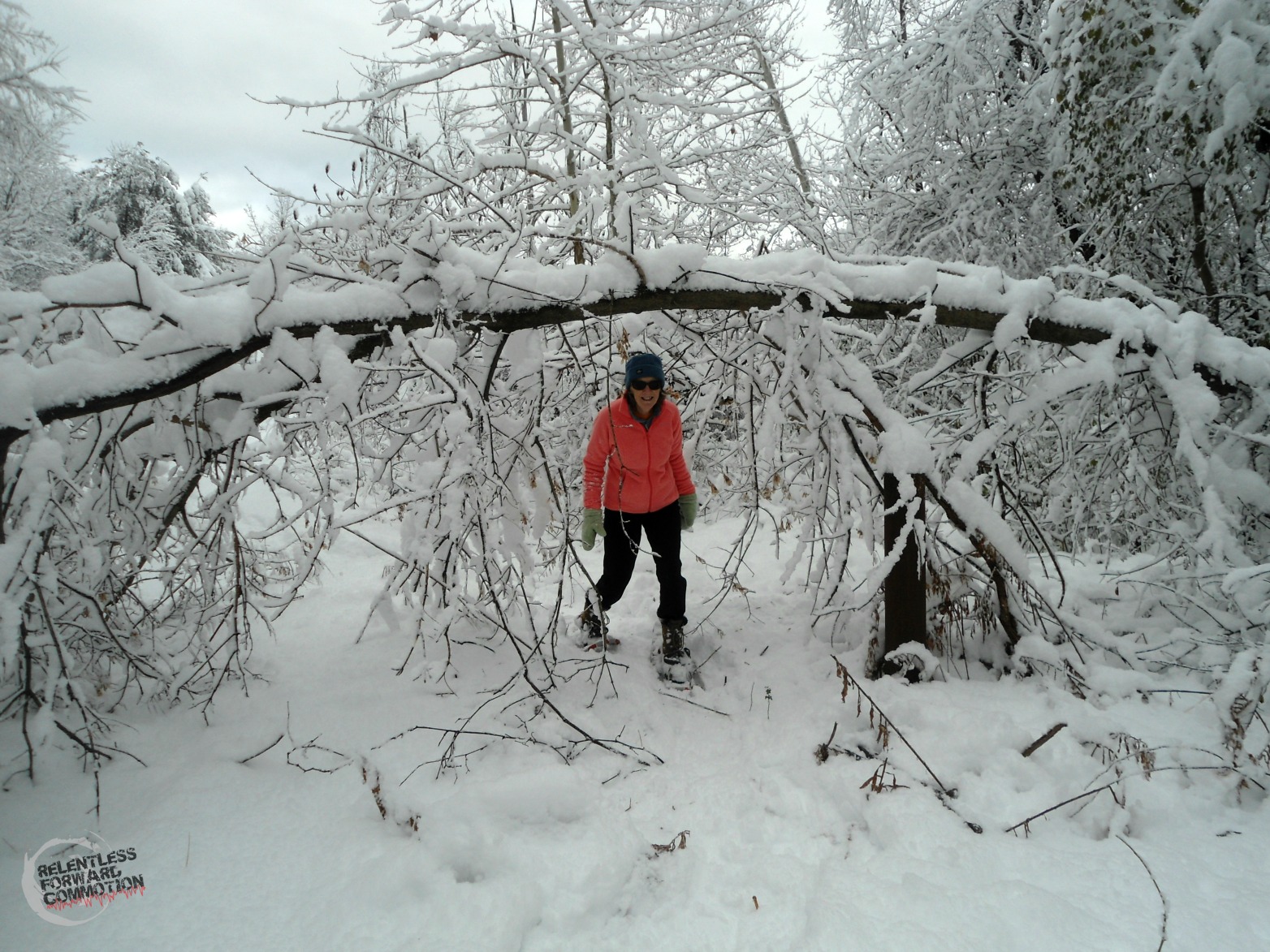 I somehow survived my first Thanksgiving where I was in charge of feeding other adults (I also cooked Brussels sprouts for the first time), and then in the blink of an eye it was Christmas.  I have finally found a family whose enthusiasm for the Holidays matches the household I grew up in. I adore this. I’ll admit I’ve felt a little “bah humbug”ish about this season already, as the kids will be with their Dad for Christmas this year.  But these wonderful people would insist that there is no room for Grinch like feelings in our new home,  for the second the Tofurkey and green bean casserole was finished, we went into full-on Christmas mode. 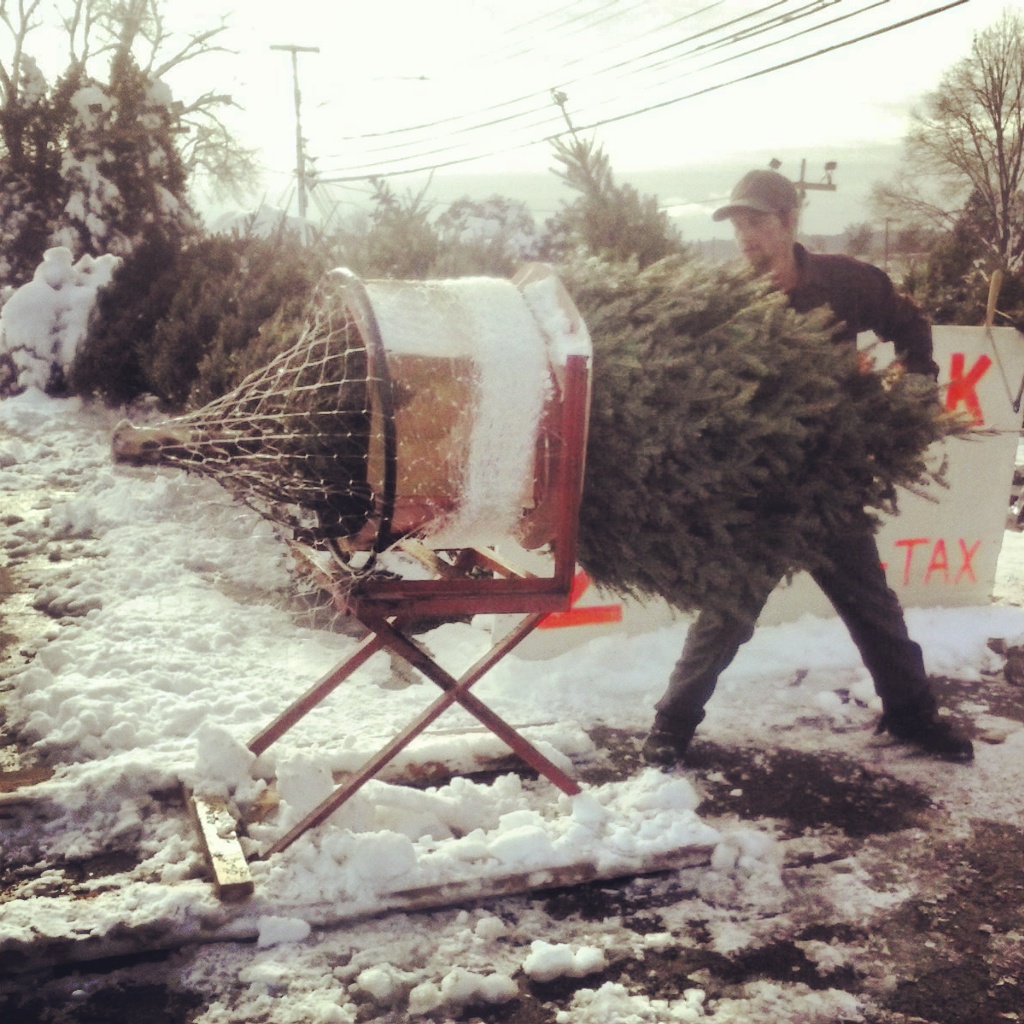 I always wondered how they got the trees in those nets.

I haven’t had a tree of my (our) own since 2011, and the act of picking out and decorating this one brought out a slew of mixed emotions.  I instantly regretted the fact that I tossed almost all of my decorations this past spring in a moment of wanting to rid myself of both material possessions and memories.  And most of the stuff I did keep stayed packed in their boxes, for it is also three of our cats first tree in over three years as well; the risk for damage caused by kitty adventures far too great this year.   Regardless, the tree was decked with love, and therefore came out simply perfect. 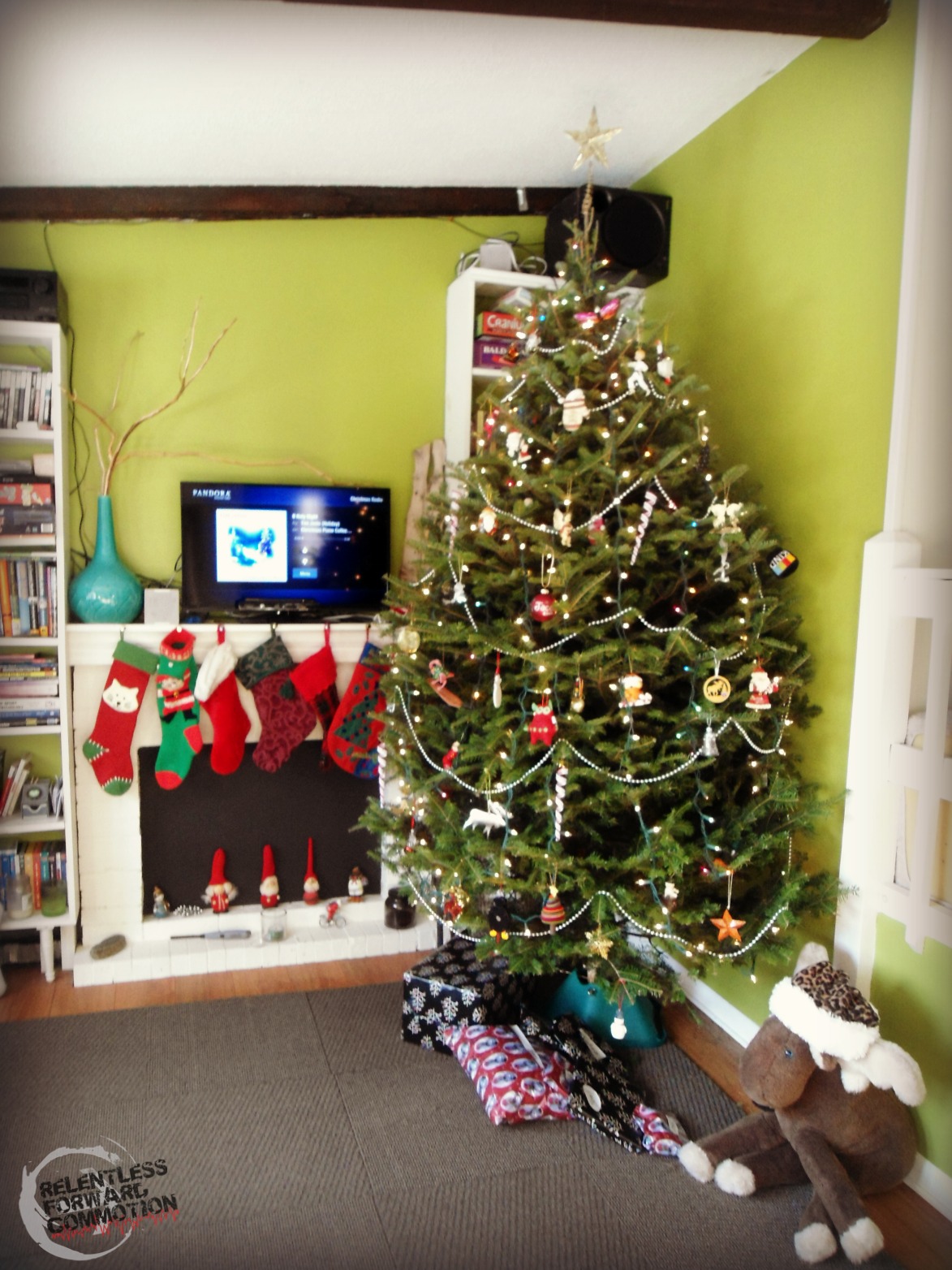 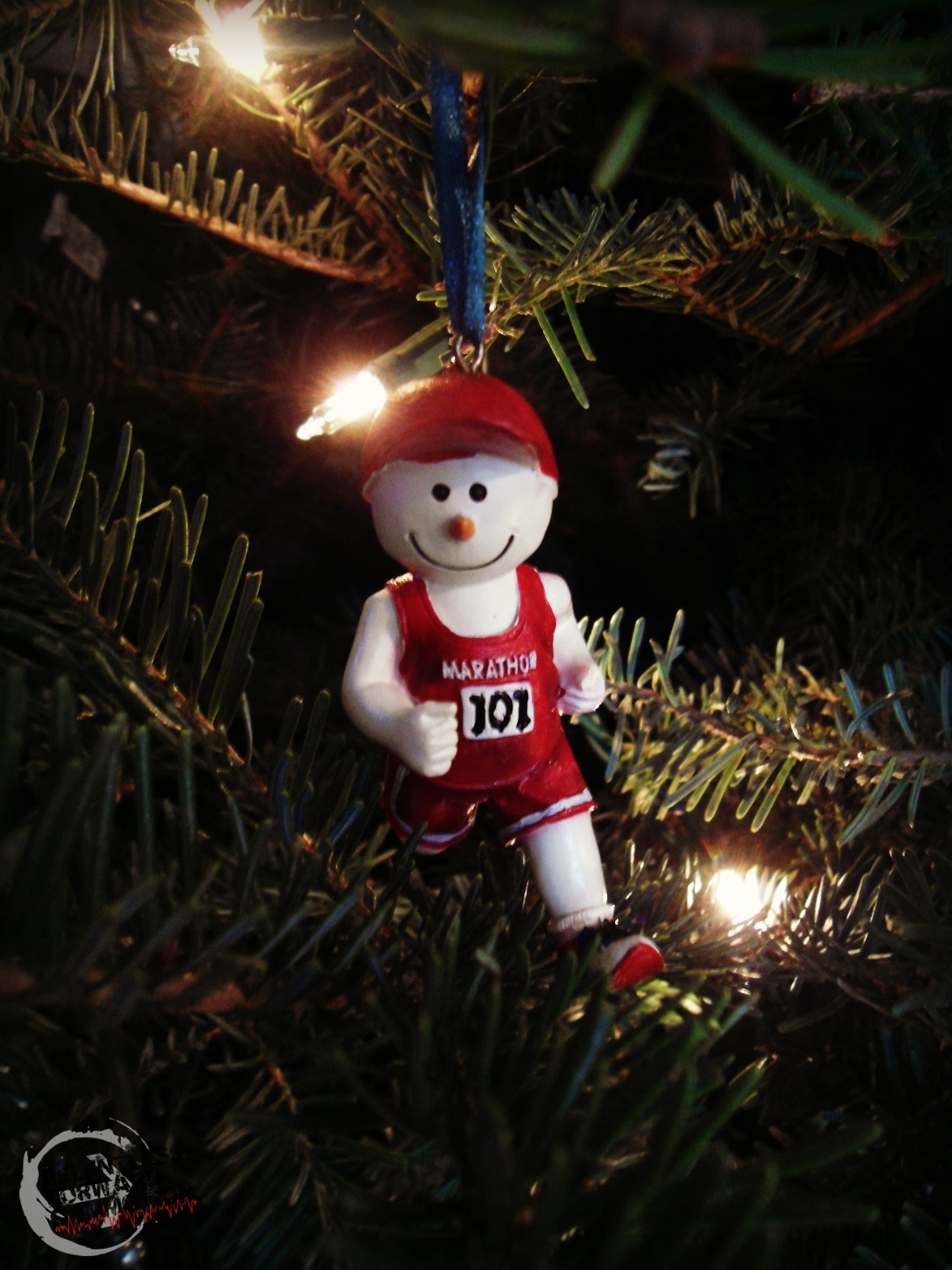