The other day a wonderful friend offered up a couple of race entries to my little running family for a local 5K/1 mile fun run.  Without any other plans for the weekend, I was quick to jump on the offer.  With the promise of medals for all 1 mile fun run finishers, my kids were quick to jump on board as well.   Is it wrong to call your elementary school children medal whores?  Probably, so I won’t call them that.  But they’ve very quickly learned the art of collecting finishers bling, seemingly at the same moment their mom (that’s me) stopped caring about said trinkets.  It’s their turn now, I guess. 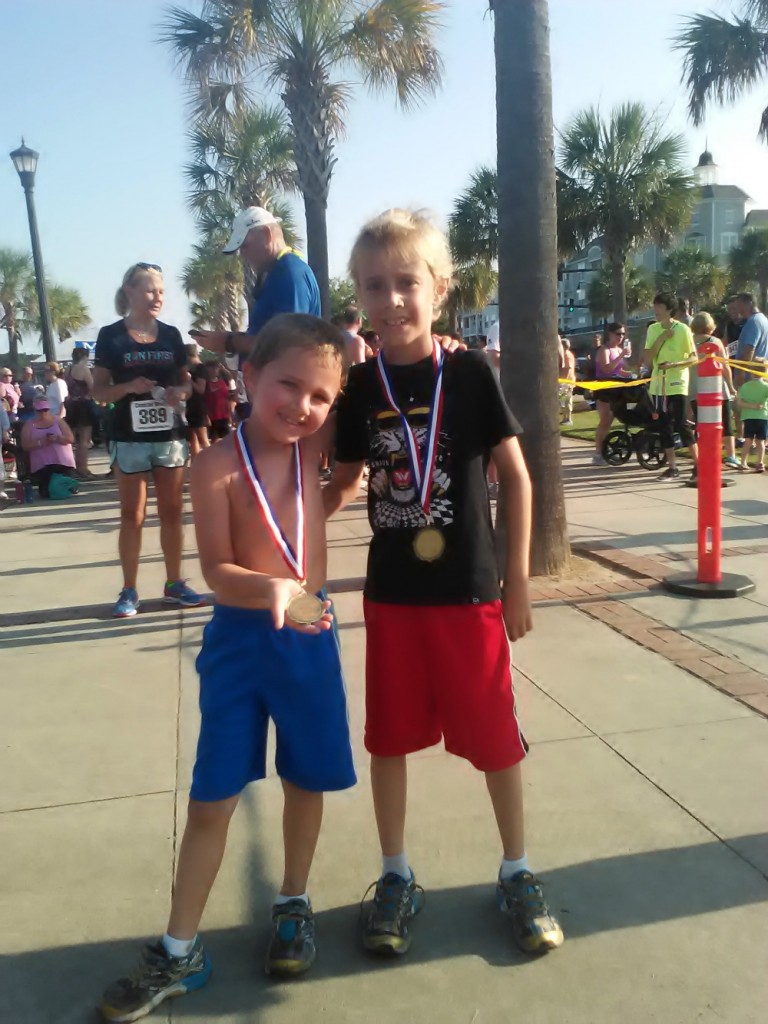 I forgot to bring a real camera. So may I present you my standard blurry cell phone pictures.

Though it’s not quite summer yet according to the calendar, the weather here in South Carolina begs to differ.  Therefore, all races start bright and early in an attempt to avoid heat stroke.    Waking your kids up at 5:30 am exactly 9 days into summer vacation is as hilarious as it sounds.  I actually had to dress one kid, complete with sneakers, while he was still in bed.  This seems kind of ridiculous for an almost 8 year old, but I pick and choose my battles.

Eventually, I rounded up all three guys and we headed down to Market Commons, the location of the race.  Parking was a breeze, and packet pickup was relatively easy too.  Until I was handed three page detailed liability waivers to fill out for each kid.  Now, please don’t construe this as a complaint; the 5K was a charity run for a local private school, so I’m certain it was a precaution required by their insurance companies, or lawyers, or perhaps both. No biggie.   But all of that said, it was pretty hilarious when, a few minutes into filling out the first form and checking off questions like “I give permission for my child to receive over the counter meds such as cough drops”, my oldest son questioned with concern “Mom, what’s going to happen to me out there?”

The 5K started at 7, and Geoff took off at the very back of the pack, as he tends to do. I don’t think he actually likes the “racing” aspect of it.  But to my surprise, he made it back to the finish line way faster than I expected, and managed to snag first place in his ten year age group.   (Sorry I doubted you, honey.) 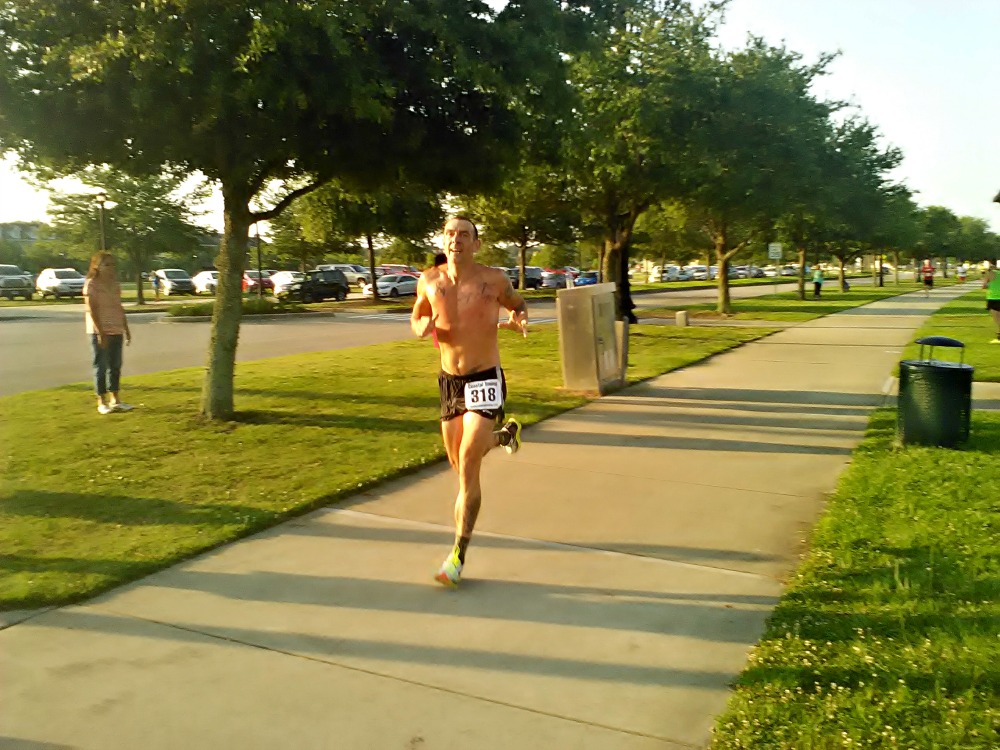 We were able to cheer on some friends, and I kept the kids away from the donut table, promising that those were there for them AFTER they finished the race.

But now, the moment you’ve all been waiting for: the one mile fun run recap.

If you’ve never done a fun run full of little kids, I highly, *highly* recommend it.  It’s fantastic agility training, and will test your reaction time as well as your ability to stop on a dime as to not accidentally kick a rouge 4 year old.

You will see very tiny humans with the drive and competitiveness of an Olympic athlete going for gold.  Minutes (if not seconds) later you will overhear those same tiny humans saying things like “jeeze, this race is SO LONG! How far is a mile anyway?”

Your heart rate will intermittently sky rocket, but not from the running.  No, it’s from every time you nearly trip over a kindergartener, insisting on running in a “z” pattern, instinctively dodge to the right, because that’s what we runners do, only to find a gang of three super fast 3rd graders passing on the right.

You’ll witness catastrophic tears of little ones who are “too tired” because the race is “SO FAR!”  They might also have legs that “don’t work anymore”, they might be “starving” and a very good chance someone is going to “die before they get to the finish line!”  Little people are incredibly dramatic and highly entertaining.

It’s such an awesome thing to be a part of.   I’m telling you, you’ve got to experience it…at least once.

As for my kids experience, the younger one ran ahead of us, and I only caught a glimpse of him crossing the finish line, with arms raised high in the air.  The older Gallowayed the heck out of the course, until we got to maybe the last two tenths of a mile.  Then he said “hey mom, bet me five bucks that I can’t run from here to the finish line without stopping?”  Of course, I shook hands on that bet and off he went…not stopping until the finish line.

But a finishers medal quickly made him forget about the five bucks. Chalk that up as a win for mom! 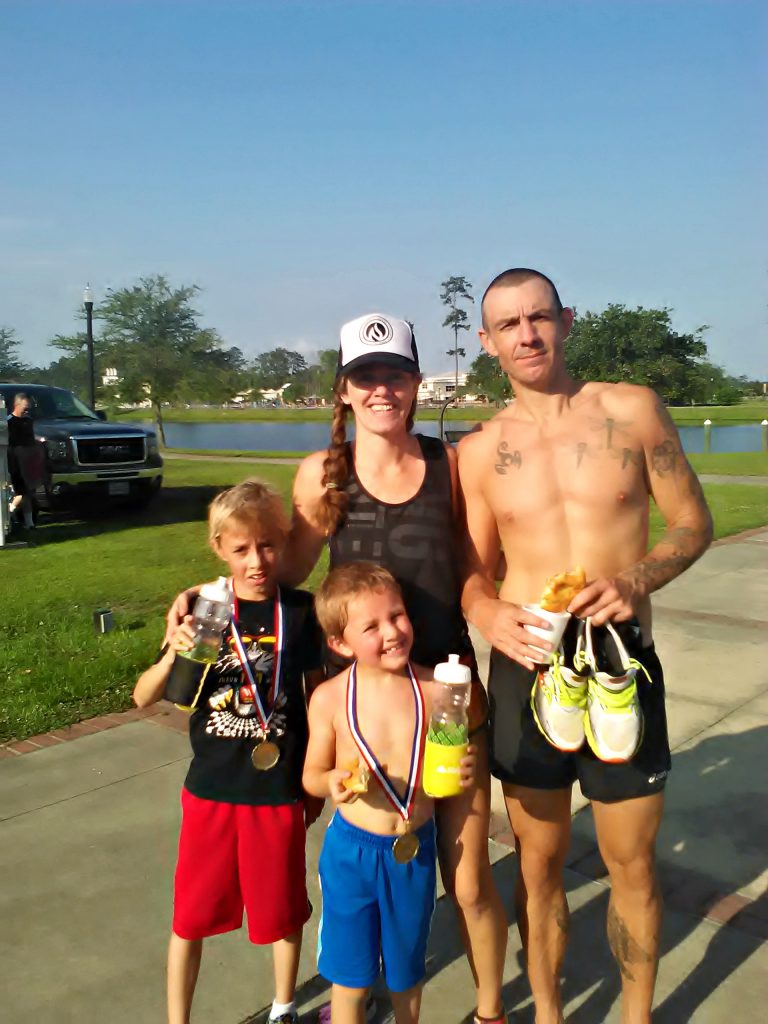 In the end, we had four “winners” with smiles on their faces (though maybe not in the picture above, you’ll just have to trust me on that one) medals around their necks (well, three of us, I didn’t take one),  donuts in their bellies (arguably the second best part of the morning, second to the race itself), and an amazing start to our weekend.

And that is all I could ever ask for out of a race.