Pictures can not do the Adirondack mountains justice. Lake Placid is simply gorgeous. 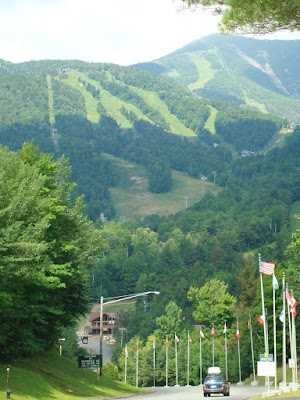 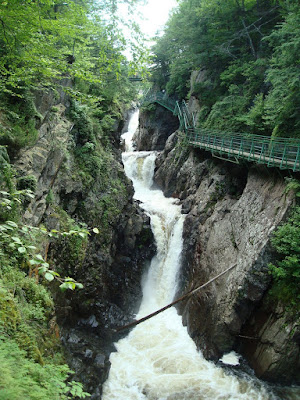 The drive to NY was as uneventful as a 19 hour trip over 2 days with a 9 month old and almost 3 year old can be. Rowen saw dinosaurs all over the place. Holly and Jim stopped at the only rest stop without bathrooms and had to pee in the woods. We even almost ran over a deer. This is the North East exactly as I remember it! Our cabin, the Red Spruce Lodge , was just perfect, tucked a good 5 miles up a mountain and down dirt roads.

Wednesday was a day of swim practice for Holly, and eventually Rowen as he jumped in Mirror Lake fully clothed. Followed by registration, expo, and a massive grocery shopping trip. 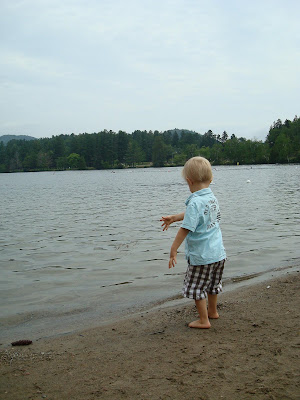 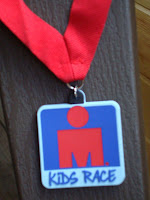 The highlight of Friday was Rowen’s IronKids race. He was in the “6 and under” category, and would be running 1/4 of a mile. To enter him, he had to be a USAT member. No joke. Fortunately, for the youngins, membership is only $5. And this wasn’t a one day thing, they told me to expect his card in the mail. I’m so amused. Another $5 for the race registration, and my little man got body marked, and ready to go. I was urged by the directors to run with him (there weren’t too many toddlers, mostly 5 and olders). He wasn’t having any of it, really, but being the running equivalent of a pushy stage mom (he’ll thank me one day!), I corralled him to the back of the starting line. He insisted on being held, but as soon as the other kids took off at “go”, he wanted to be put down to run. That’s my boy!

We made it about 25 yards before the IRONMAN video crew, complete with a lady with a microphone, came running over to him . All with good intentions, of course, to capture the exciting moment, but it scared Rowen back into my arms. We alternated a few yards of toddler running, then a few yards of mom carrying toddler, for the entire quarter mile. Finally, he ran across the finish line, last in his age group, but finished! A lady ran over and handed him his medal, which he immediately yanked off with a yell , in true Rowen fashion. He does NOT like race shwag. He doesn’t get it from me, that’s for sure! The first in our family to earn an “M-Dot” medal did, however, highly enjoy his Gatorade. 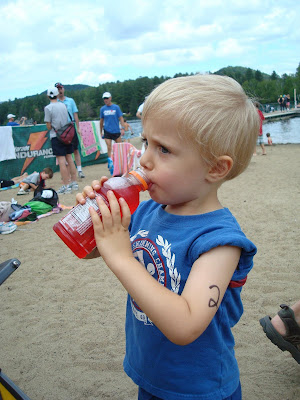 The highlight of the vacation was, of course, IRONMAN USA. Never have I seen such a spectacle! 2,258 athletes entered the water in the POURING rain on Sunday morning. And it was just as inspiring as I expected it to be. 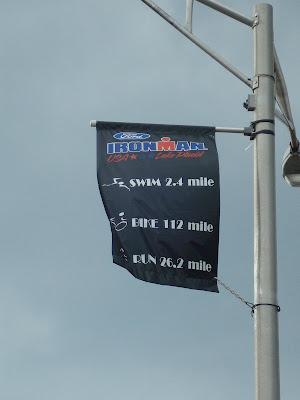 While walking to the swim start, we passed all of the bikes lined up in transition. We joked around and tried to guess exactly how many dollars worth of bikes and gear sat down there in that field…it’s almost overwhelming to think of it that way! 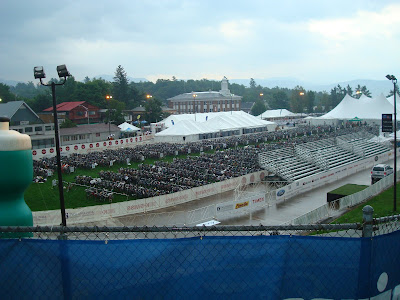 Fortunately for me, Grandma and Grandpa were also in town for the race, so I was able to leave the boys with them and run around to take pictures. After 3 really insanely heavy bouts of rain, the skies cleared and we were spared wet weather. I can’t tell you how thankful I was! At some point while I was walking around, I passed a girl and thought to myself “WOW she looks JUST like that girl Tara from the biggest loser!”. I didn’t think anything else about it, until later mentioning it to Holly, who said that her friend Keri had seen her as well. A quick facebook search of Tara Costa revealed on her page that it was indeed her, spectating at Ironman! You never know when you will have random reality T.V. star sightings, haha. 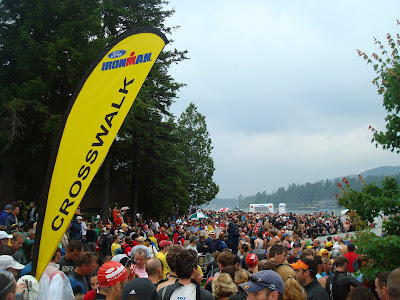 I wish I had a good video of the actual swim start. I do not. I was a little disappointed that there was not any sort of countdown…it was simply talk talk talk talk CANNON! no , on your mark, get set, none of that. Holly said even she was surprised! 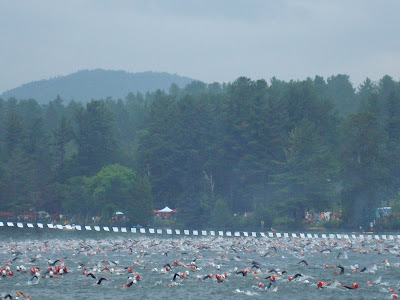 I have decided that when I volunteer at an Ironman, or any triathlon for that matter, i covet the volunteer position of “wetsuit stripper”. Not only is it hysterical, but appears to be somewhat of a contact sport. Anyone who has participated in or seen a triathlon knows what I’m talking about, you just have to see it to realize how crazy it is. They yank those suckers off so fast I was afraid some of the smaller competitors were going to go flying! 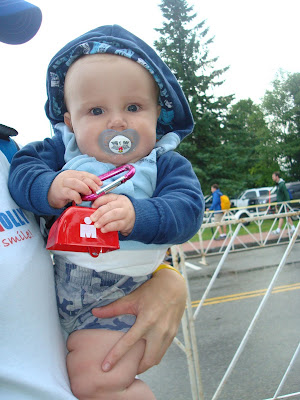 Holly had a fantastic swim, and an easy T1. The rest of us spent the next 4ish hours at the end of Mirror Drive, which was the end of the bike loop (it was a two loop ride) and also around mile 9 of the run. Holly said that she came out of the water incredibly thirsty. Even after months of training and perfecting her nutrition, something went wrong. Before she knew it, she had consumed more water than necessary (and not enough food or her electrolyte replacement drinks) and developed a case of hyponatrimia. She said a lot of the bike ride was a blur (typical of hyponatrimia, you start to lose your head so to speak) and just missed the bike cut off of the first loop. She ended up in the medical tent, where they watched over her for a while until they released her.

It was a disappointing afternoon for all of us, we had all so badly wanted to see her finish. I burst into tears myself as I saw her pass by on the bike, knowing they would take her chip away from her once she reached the start of the second loop. I had honestly NOT prepared for this moment. When someone you love trains so hard and puts so much of their self into a goal, a part of you goes into it to. All of the months of listening to her talk about her training trials and triumphs, I felt like a part of me was training too. But it just goes to show you that Ironman, as with any race, is completely unpredictable. You can do EVERYTHING right, and your body can just say “you know what? Today is not your day”. Holly trained her heart out, and it just wasn’t her day. And she wasn’t the only one, almost 10% of the people who started the race didn’t finish. But in true Holly fashion, she and her husband are already sitting down and looking at the fall calendar, deciding when she can attempt this distance again. And she WILL finish the 140.6, I have no doubt in my heart about it. And I think she absolutely totally kicks ass for attempting an Ironman. Because frankly, such a distance intimidates the heck out of me, and most of the rest of the general population!!!

So, after regrouping at home, eating dinner, and leaving the kids with the grandparents (thanks Mom and Dad!) Holly, Jim, Theresa, Keri and I headed back to the finish line to watch the last 3 hours of finishers roll through. For those of you unfamiliar with Ironman, it starts at 7:00 am and you have 17 hours, or until midnight, to finish (with various cutoff points in between). Anyone can be inspired by the pro athletes who finish in 8 hours (and the winner, by the way, finished 20 full minutes before the second place athlete. Incredible!) . But there is something just amazing and awe-inspiring about watching people struggle into the finish line, in the dark, knowing they have literally not stopped moving ALL DAY just trying to achieve this goal.

On the drive back to the race, we passed the marathon course. I of course had my cowbell in hand, hanging out the window.

So the finish line events were so Ironman-esque it almost seemed fake. The Ford Everyday Ironman hero, Matt Long, a former NYC firefighter who had been hit by a bus, broke almost every bone in his body, and was told he’d never walk again, finished with just moments to spare. Literally, somewhere around 16:56 or something like that, he crossed the finish line to Black Sabbath’s “I am Ironman”. (my video isn’t very good so i’m “borrowing” from youtube…)

They turned off the music and Mike Rielly (the “voice of Ironman”…if you’ve ever watched one on TV he’s the guy who says “Heather Gannoe…you are an IRONMAN!!” or atleast one day he’ll say that…) was interviewing Matt, when all of a sudden there was a roar from the other side of the circle, where athletes were entering. There was someone else left. Volunteers came running , people started screaming, and Mike Rielly himself went running for the athlete. As he entered the finishing chute, of maybe 100 yards, he had less than 10 seconds left to finish the race. NEVER in my life have I cheered so hard for a complete stranger, or wanted something so bad for someone else! You can see in the video all the people in the crowd looking back at the clock, everyone wanted him to finish in time! Oh and uh, please excuse the obnoxious screaming girl. That’s me. It was a long day, what can I say!

and another view, from a youtuber…gotta love the commentary!

So, as I expected, I am absolutely convinced that I need to do an Ironman. Of course, I have two babies, work, and have to finish my degree (I have to finish that thing by the time I’m 30….) so there will not be an Ironman any time soon. There will, however, be SWIMMING LESSONS! Wahooo! September 12th there is a local sprint triathlon, and darn it i will doggy paddle those 700 yards if I must, but I’m doing it, with my trusty Shwinn from Target 🙂 Ironman dreams have to start somewhere!!!

If my designer mama from “Krizzy designs” is reading this…I might need your help. It appears I may soon become RUN (and swim and bike) FASTER MOMMY!