If you think an ultra runner couldn’t possibly come up with enough material to write an entire blog post about a one mile fun run, you’d be mistaken.  Hell, if you give me enough time, I could pen a 1500 word essay on my last trip down the frozen foods aisle of the grocery store.   Also,I think after a 50K and two 50+ milers, I can safely consider myself an ultra runner, but then again, I might be the one mistaken.

A few weeks back my kids came home with a flyer advertising the Ripley’s Family Fun Run, the annual one mile race that takes place the night before the Myrtle Beach Marathon.   As you might imagine, my kids don’t have to ask me twice to do any sort of running event.  In fact, I’m usually the one pestering them to go.   After subtly mentioning that they run more than a mile ALL OF THE TIME, to see if I could convince at least one of the two of them to run the 5K instead, we all settled on the fact that the Fun Run was where all of their friends would be, so medal or not, the fun run is what they wanted to do.  I can’t argue with that logic.

The great thing about this fun run is that a portion of each entry is donated to the local school of your choice.  There is a mini-internal competition (and apparently a trophy) for the school with the most entries.  Rumor is that one school in particular has won every single year.  That school is not the one my kids attend.  But not one to be defeated, my kids school pushes this race so hard, that even the gym class teacher was wearing a poster-board-sandwich sign at school drop off reminding parents to sign up.

Sadly, according to my 9 year old, not many of his friends signed up, because the $15 registration fee was “too expensive”.  Which is bullshit if you ask me, when you consider a box of Girl Scout cookies costs $4, and most people buy more than one box.  No offense, Girl Scouts.  I just prefer running over cookies.

We arrived at 4:30 for the 5:30 pm start, which was probably about 45 minutes too soon.  The race started and finished at the Ripley’s Aquarium at Broadway at the Beach, which meant there was more than ample parking. 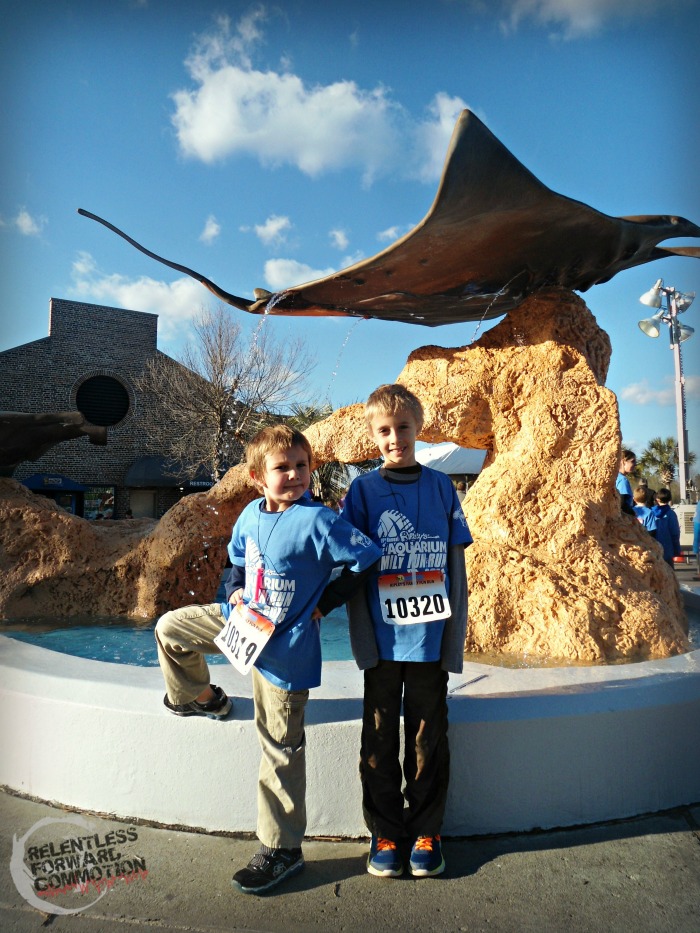 However, as you can probably imagine, corralling hundreds of elementary school kids into one small-ish area, not-so-patiently waiting for the start of a race, is akin to watching a bag of popcorn pop.  Little kids were bouncing out of their shoes EVERYWHERE. Literally, one of mine lost his left show twice.   And when the DJ started playing the “Whip and Nae Nae” (I still can’t say that with a straight face.  Say it with me now, “kids these days”) the little ones lost their ever-loving minds.    What’s worse, they all had on the exact same t shirt, so if you weren’t paying attention, your little blonde haired 9 year old would blend in with the other 300 blond haired 9 year olds in the blink of an eye.  Side note: the “don’t wear the race shirt to the race” rule does not apply to those under age 12. 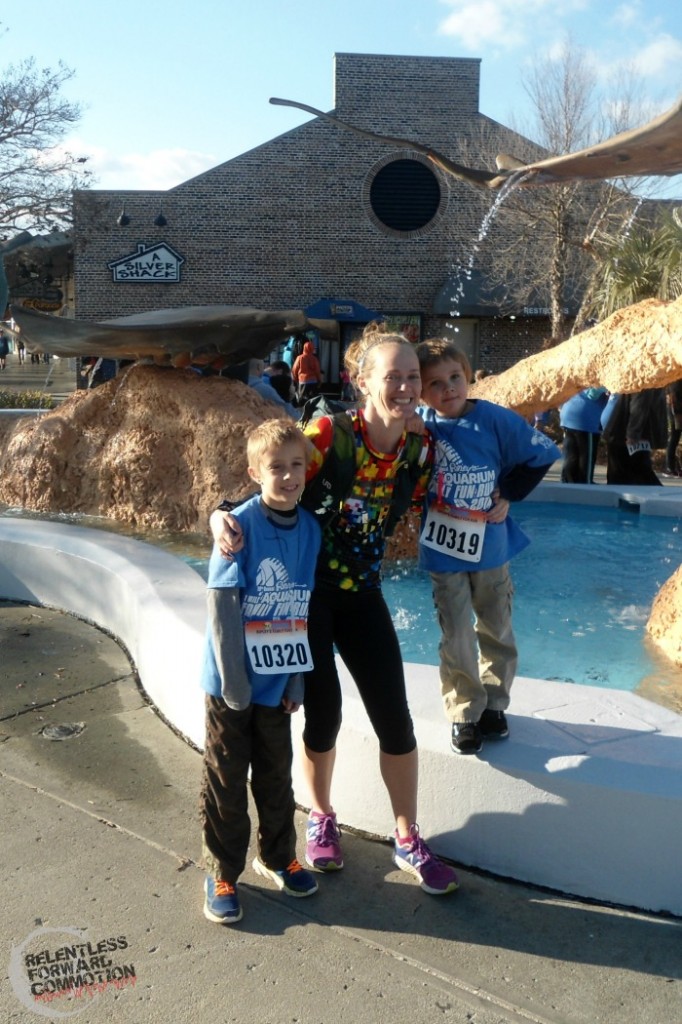 But the incredible kid chaos made my heart smile, for all of these excited little kids and their overwhelmed parents (some more than others) were out there for a great cause: benefiting their schools through physical fitness.

FINALLY we were told to line up at the start line.  I gave what felt like the 5th reminder to my excited 7 year old about where to meet if he got separated from Geoff.   As I’ve mentioned a few times before, that little man loves to run. My 9 year old, however, isn’t as keen on the idea, so I reminded him for what felt like the 5th time that it was more than OK to simply walk…and I would walk with him.

Of course, once the starting gun went off (actually, I think it was actually just the emcee saying “GO”) my 9 year old decided he DID want to run.  Unfortunately, the hundreds of other people surrounding us decided they wanted to walk .  So we commenced the dipping/dodging/weaving in and out of toddlers, strollers, sprinting little kids, and walking adults. 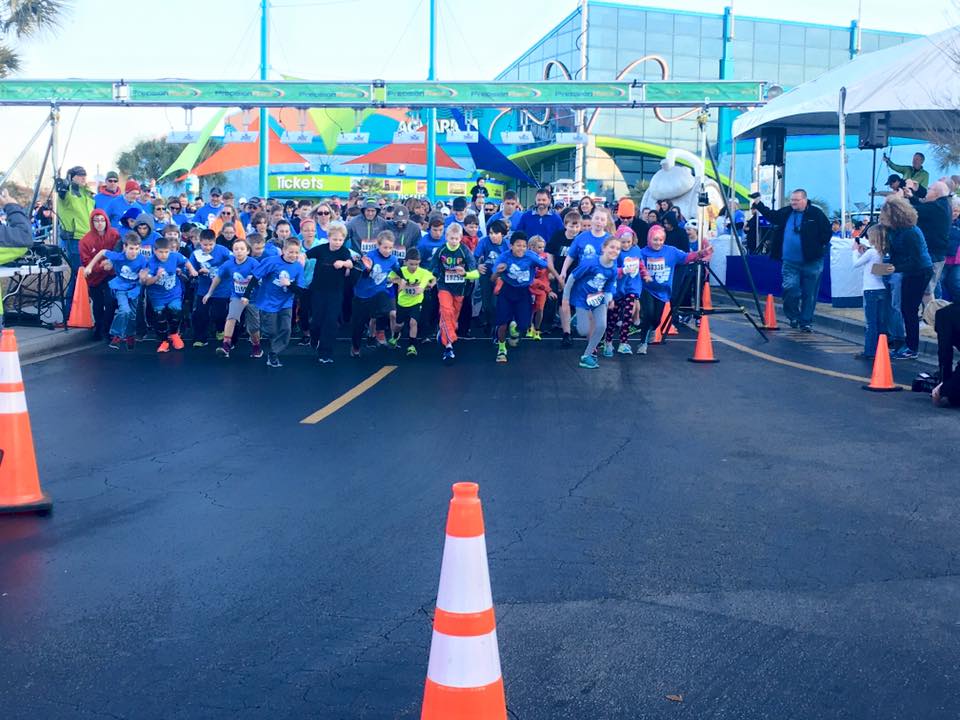 The course itself weaved around the outer perimeter of Broadway at the Beach.  At one point we approached a 180 degree turn.  But a good 50 yards ahead of the turn, seemingly everyone was taking a shortcut.  I was very proud of my kid when he said there was NO WAY we were going to cheat and cut the course, so we kept moving forward.

Eventually we made our way back towards the aquarium (I guess there really isn’t a ton to talk about during the course of a 15 minute mile) where the race course actually went IN to the aquarium. 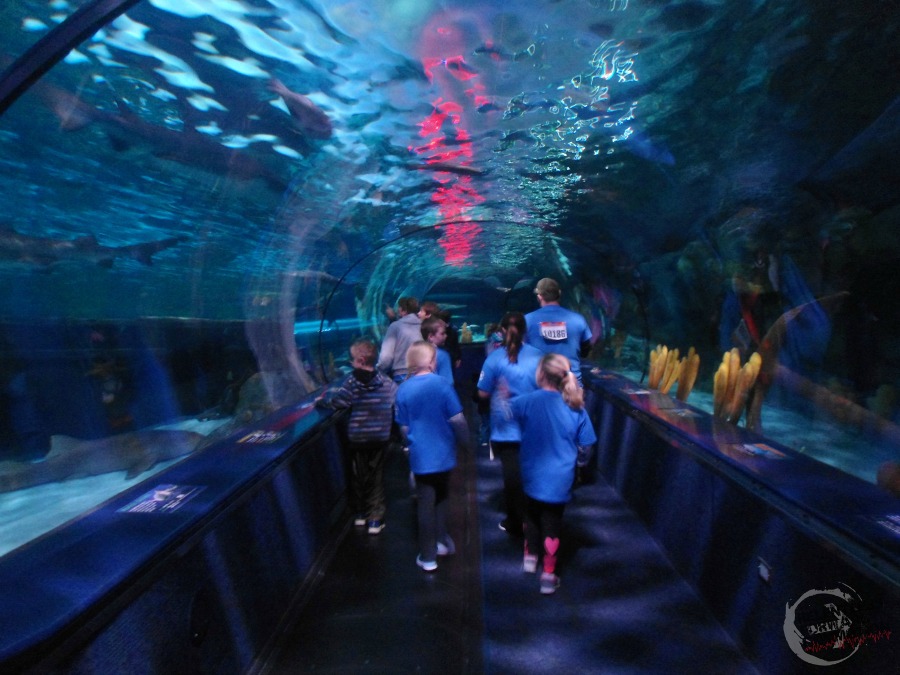 Fins to the left…

Of course, all running ceased by all participants once in the middle of a shark tank, but who could blame anyone for that.  Hammerheads and Sawfish are totally worth blowing a PR.

Eventually we made our way out of the aquarium and to the finish line and met up with Geoff & 7 year old, who had finished long before us. I have zero idea of our actual distance or finishing time, but if I had to guess, it was probably about a mile and 30 minutes.  Because of the sharks.

There was no finishers certificate or medal, which is fine with me, as I’m pushing the “experiences over stuff” mentality on my kids.  And honestly, they didn’t even think twice about it, but were indeed excited to hang another race bib on their medal rack.

We then waited in a ridiculously long line to get back into the aquarium for the “after party”.  But it was 100% worth the wait, because everyone, kids and parents alike, were given pizza, water, more pizza, fruit snacks, and fruit puree pouches.  AND we got to eat all of these absolutely wherever we wanted in the aquarium.   We picked a quiet spot next to a massive fish tank.  My kids loved watching the parrotfish, trigger fish, and other fish I can’t identify (my marine biology major days were well over 15 years ago) while they feasted on post race snacks. 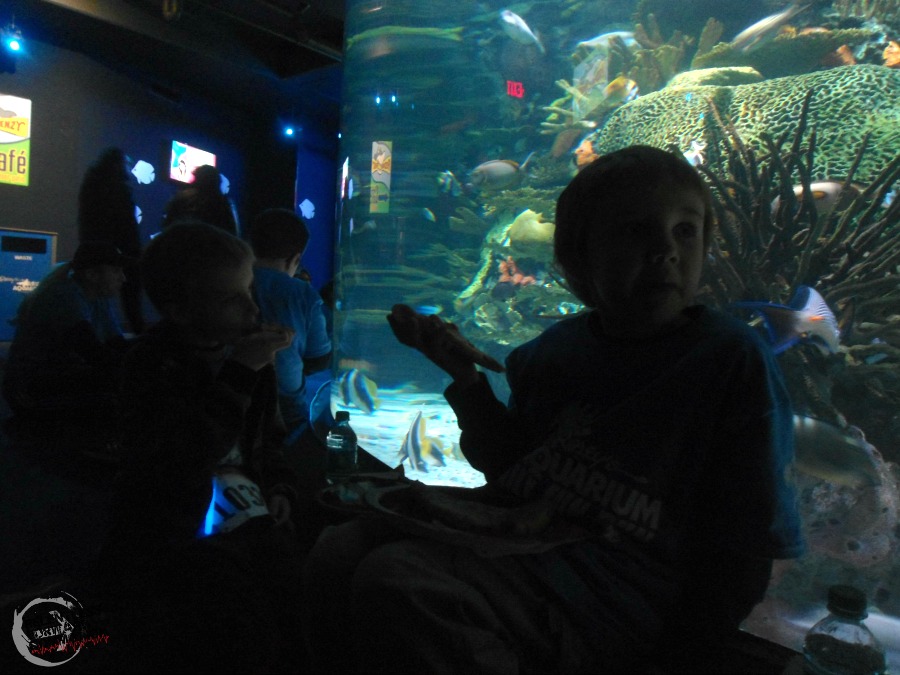 The original plan was to head immediately over to the 5K starting at 7:00 to cheer on some of our friends, but we (and by we I mean these two adorable boys) were distracted by shark and horseshoe crab petting.  So we stayed for a while and shut down the aquarium at 8:00 pm.

In summary: the Ripley’s Family Fun Run was more of a “hey, if you go run a mile I’ll let you have pizza and hang out at the aquarium for the night” sort of bribe, but as a running mom, I was stoked to have my kids willingly participate in a “race”, no matter what their intentions.

If you are in town for the Myrtle Beach Marathon weekend, and you are toting little cheerleaders along, I’d highly recommend running this race.  Yeah, it’s chaotic and crowded, but totally worth it to let your kids have their own taste of race fun as a part of the weekend.