My father is a stubborn, opinionated man.  By the luck of genetics, I inherited both of these qualities.

My father is also a relentlessly compassionate man.   By the virtue of good parenting, I inherited that quality as well. Growing up with a stubborn, opinionated, compassionate father meant that I was taught to form my own brazen opinions from a very young age.   It also meant that I spent many a dinner table conversation worked into a near tearful frenzy over such topics as the ethics of whaling or whether a female was capable of being an adequate fighter jet pilot over her male counterparts during a time of war.   To this day, my father still knows how to turn any topic into a debate that will make my blood pressure rise and elicit a frustrated eyeball roll.  When I was younger, I used to think he was a jerk for pushing my buttons.  Now that I’m older, I realize he was simply teaching me a valuable life lesson:  stand up for what you believe in.

Because after all, they say if you don’t stand for something, you’ll fall for anything.

Over the years my own stubborn, opinionated, compassionate, big mouth has gotten me into a lot of trouble.  I’ve lost friends over my unabashed viewpoints (I’ll admit, I was probably in the wrong),  and I’ve elicited eyeball rolls from others on countless occasions (likely deserved).    As I’ve grown older and maybe only a tiny bit wiser, I’ve learned to pick my battles,because I know at times my outspokenness can be incredibly obnoxious.   But when I do speak up, I do so because deep in my heart I know what I have to say needs to be heard…and I hope that something good will come out of me voicing that opinion.

(Have I also mentioned my father could ramble on for days?  Because I inherited that talent as well. Bear with me here…)

Point being: I didn’t want to write a negative review of the Heartbreak Hill Half Marathon.

I dreaded hitting the publish button because I am not only a huge fan of Runner’s World, but I genuinely like the people behind Runner’s World.   I have been fortunate enough to spend time with numerous staff members on a few occasions, and they are good people.  Hell, if I lived closer to Bethlehem, PA, I’d invite them all over for a campfire and epic battles of Cards Against Humanity on a regular basis. (You guys are cool with karaoke, right?)  I knew and saw first hand how much heart and effort was put into the inaugural Heartbreak Hill Half Marathon, and I was honored to have been invited as a guest to attend the race.   So the LAST thing I wanted to do was ruffle my gracious hosts feathers by throwing them under the proverbial bus.

But as it turns out, unbeknownst to most of us at the front, our friends at the back of the pack aren’t being treated the way they deserve.  And I knew I couldn’t keep my mouth (fingers?) shut about it.  I had hoped a few people would read my post.   Maybe a few of you fast runners would think twice and stick around at the end of your race to cheer runners on.  Perhaps a race director would stumble upon the post and re-evaluate their race break down procedure.

I never imagined that tens of thousands of you would read the post.

What followed after I hit the publish button was a clearly much needed conversation about what the back of the pack finishers experience on a regular basis.  Hundreds of you commented with your personal stories of closing courses sooner than initially stated, having water tables dumped out right in front of you, no medals, no food, packed up finishing lines, and more.  For the record, I wanted to reach through the computer screen and hug each and every one of you. How is it that SO MANY OF YOU have these stories, yet this is still an issue?  I’m not sure.  And I understand that many of you are frustrated with the fact that you have been screaming this for YEARS to no avail, yet a “fast-ish” runner complains and everyone takes notice.  I truly wish that wasn’t the case, but to be honest, one way or another I’m glad people are taking notice.

So while I appreciate so many of you thanking me for writing the post, I want you to know that I’m not the one who needs to be thanked: it’s all of you.  THANK YOU for sharing your stories and experiences.   THANK YOU for sharing the post so many times that it got the attention of the people who truly needed to see it.  THANK YOU for having the courage to continue to show up to races and endure the miles, even though you were aware that it was a very real possibility that the finish line might not be still standing when you finally reached it.   Because truly, YOU are the ones who inspire ME.

And  lastly, a massive THANK YOU to Runner’s World for responding in such a fantastic, positive way; acknowledging that the discrepancy in the treatment of faster runners versus slower runners and walkers is very real, and asking what can be done to help ensure this doesn’t continue to happen.

Now let’s DO something about it.

My Dad taught me to stand up for what I believe in, and now I’m passing that reminder on to you guys.   As John Bingham commented “The times – literally and figuratively – have changed.”   (cue small-time blogger freak out that John Bingham commented on my post) .  More and more “average Joes/Janes” are joining the endurance community every day.   Remember, at the end of the day, the majority of these race companies are businesses, and you are their customers…no matter what your mile pace average may be.   Demand equal treatment.   Recognize of course, that race directors are only human, they are often at the mercy of the city and streets the race is run in, and mistakes will happen.  But remind them that your race experience by no means carries less value because it takes you a little longer to cover the course.

I realize this is completely a “first world problem”, but it is a problem none the less.  While my story noted the lack of “fun” I had at the back of the pack, many of you talked about a lack of water on incredibly hot days, or a lack of traffic cones on an open-to-traffic course (still within the time limits).  As a human being, your safety MATTERS.  And as a customer, your experience absolutely does too.

To end this long rambling post: I urge you to please keep this conversation going.  Let your voices be heard.  And race directors, for the love of all things, LISTEN TO THE VOICES!!!   Runner’s are a smart bunch (and a great looking bunch at that, but I digress) and I’m certain that we can all work together, positively and constructively, to start taking steps to turn this situation around.   One of my favorite thing about the endurance community is that it is welcoming to everyone: all genders, shapes, races, sizes, colors, and paces.  Let’s make sure it stays that way.

And thank you Dad, for making me an opinionated loud mouth. I love you. 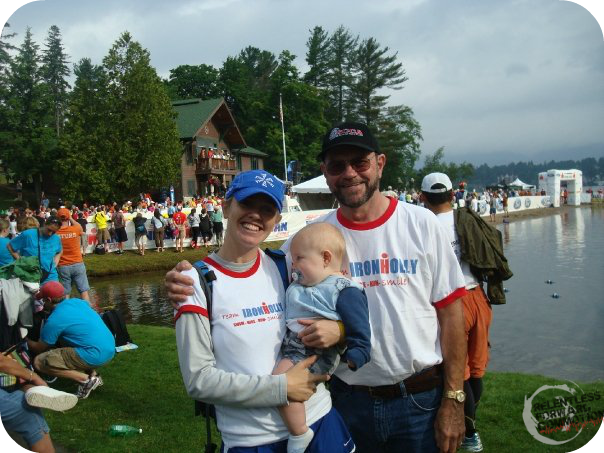 Me and my pops, cheering on my older sister at Ironman Lake Placid, 2009