Sometimes the endurance world reminds me of childbirth.  The post race (birth) endorphin high makes you forget how miserable the actual race (labor) was, and suddenly the months of grueling training (pregnancy) seem like no big sacrifice at all.  The proof: siblings and marathon PR’s.

A few weeks ago, one of our local Spahten friends suggested that we all meet up in the Amherst MA area for a 23 mile run/hike/jaunt through the Seven Sisters mountain range.   When Geoff told me about the invite, I immediately agreed that it would be a great way to spend a Sunday.  When Geoff suggested that we jam our packs FULL of heavy stuff, and hike the entire thing as a means of adventure race training, I enthusiastically agreed.

But I had forgotten how miserable those Seven Sisters can be.

You know, the race that only months earlier that literally brought me to my knees (I fell a few times) and left me feeling humbled.  A race that had taken me just over a full two HOURS longer to finish than my recent and previous half marathon PR.   I somewhat remembered how difficult the course was, I mean why else would I agree that this would be stellar training.  You know the old saying “your eyes are bigger than your stomach” when out of hunger, one takes on far more food than they can actually consume?  This would be the training equivalent: my desire for mileage, hours, and endurance pain was far greater than what my legs could actually handle.  Another example of the principle of specificity and such.  But I digress. 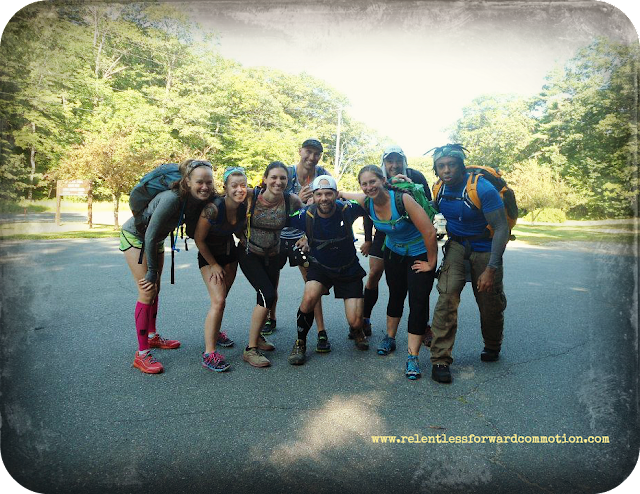 Sunday morning, Geoff and I met up with our mountain cohorts for some breakfast in Amherst, then headed over to Hadley to regroup in the parking lot of the state park.  I decided last minute to switch from a painfully overstuffed hydration pack to a daypack (Osprey Statos 18) which allowed me to haul around even more stuff (and thus, weight).  The group reviewed maps, and talked about our game plan.  Out and back on the Seven Sisters half of the Metacomet-Monadnock Trail (M-M trail) for a total of 12 ish miles, out and back on the Robert Frost half of the M-M trail for another 10, and for the truly sadistic, and out and back down the paved main road to tack another 5k on for a total of a marathon distance for the day. 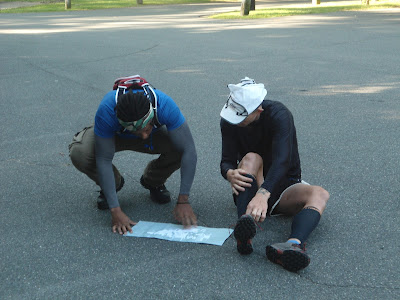 While the majority of our group had planned on running the course (and had wisely left gallons of water and various check points to refuel), Geoff and I carried everything we needed on us, and were planning on hiking.  A last minute port-a-potty stop, a “Wolf Pack” speech from the instigator of this madness, and then we were off.

And that’s when I remembered exactly what a beast this trail was.

I don’t believe I’ve ever hiked any sort of distance with any sort of weight beyond a simple hydration pack before.  A general estimate put my pack at about 20-25 lbs.  I know, not huge, but still new to me.  It took me a good mile/30 ish minutes to get used to the weight I was carrying on my back. I felt such an uncomfortable pull in my lower neck, but as I slowly kept pressing forward it slowly got a little better.  I told Geoff that I totally understood now why toddlers are so weebly wobbly when they first lean to walk.  I too, felt like I was going to teeter over at any second now that my normal center of gravity was completely thrown off, especially while climbing some of the very steep, rock faces that were in our path. Needless to say, there would be no running.

Anywho, I’m actually boring myself in recapping this adventure, and I’m sure you don’t want to hear about every single step we took (a lot), the number of times I was grossed out by the huge millipedes on the trail (a lot), and the number of times I randomly started singing “The Safety Dance” to no one in particular (more than five). Here is the summary:

15 miles.  7 hours, 15 ish minutes (including all breaks, and one decently long transition/shoe/sock change). 8 mountains …seven of which we summited twice.  A disgusting amount of elevation loss/gain.  Despite the highest peak topping out at around only 1200 feet, this trail is known for it’s constant, steep up/downs.  I know, I know, those of you out west are probably giggling at such tiny mountains, but the trail itself is incredibly technical and unforgiving.  Runner’s World even ranked this as the most technical trail in New England (and we do have some gnarly trails).

THE GOOD: My nutrition. Spot on.  I have to give credit where credit is due, and thank Geoff for his constant “are you drinking” and “have you been eating” reminders.  He was like my very own trail mom.  Or Sherpa.  Yes, Sherpa sounds much manlier.  My longest event EVER was the ultra beast, topping out somewhere around 11 hours. My next longest was my worst ever marathon, where I bonked and wandered around for a long time, resulting in a 5:33 finishing time.  So this 7.5 hour jaunt through the woods was somewhat new territory. It felt really good to never “bonk” from hydration or nutrition issues, nor experience any GI issues.

THE BAD: After we hit the parking lot/transition area after the seven sisters, we took a small break to refuel, and change shoes and socks before setting out for the second half of the journey up the Robert Frost half of the trail.   As mentioned above, mentally, I was still in a really good place, but my knees were really starting to hurt.  I don’t typically experience any sort of knee issues, but lately my right leg has had a mind of it’s own, with chronic calf pain that has crept up into my knee.  Surprisingly, this day my calf felt 100%, but the instability and weak feeling in my knee was starting to rear it’s ugly head. 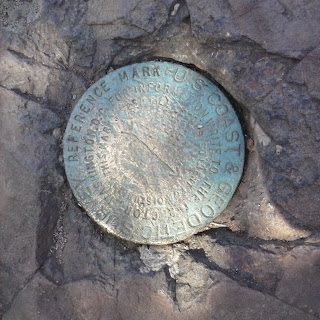 We climbed to the top of the next “mountain”, Mt. Norwottuck, at 1106′, and I told Geoff I was out.  At first I was pissed off at myself for not being able to hang for the whole 23 miles. But then I remembered that this was something new to me.  I am a runner, not a summit seeker (as paltry as they may be), and I couldn’t remember the last time I hiked for 7 hours with a heavy pack.  Oh that’s right…NEVER.  This was a first and I was proud.  Principle of specificity: I can’t expect to be good at something that I have not practiced nor trained for.

So we took a breather on the top of our last summit of the day.  Geoff tried to teach me how to use a compass.  I may or may not have been listening (secretly I already knew how to use one, but I like when he gets excited about teaching me new things). We ate some food, took some pictures and headed back down the mountain.

And THAT is when my knee decided it was done.

It was only about 1.6 miles back to the car, but it was the longest 1.6 miles of my life.  Every descending step my right knee would pop and threaten to just give out. I found that doing a modified sideways shuffle (like a damn crab) helped a little, and on the steepest parts, I held Geoff’s hands and simply walked backwards.  I was a mess.

But a proud mess. For I tackled the Seven Sisters once again, and survived. We set out with the goal of being on our feet for a long time, and we certainly accomplished that goal.  It’s been about 48 hours now, walking is still a chore,the stairs my nemisis, and I physically cannot stand on my tip-toes. It hurts…and we are all already eyeing the calendar to see when we can get back out there again.