Growing up in Vermont,  I always associated the Salomon brand with skiing. It wasn’t until a few years ago that the Salomon running shoe line was brought to my attention, coincidentally enough, by a running friend who was formerly a competitive skier.   Over the last year or so, I have seen Salomon trail shoes gaining popularity in the obstacle course running world for their rugged design and aggressive grip.   Now, road shoes are a dime a dozen, but finding a good trail or all terrain shoe is much more difficult in my experience.  As of the last few years I’ve found myself spending far more time in the mountains than on the road, so needless to say, I had been looking forward to getting my hands on a pair of Salomons. 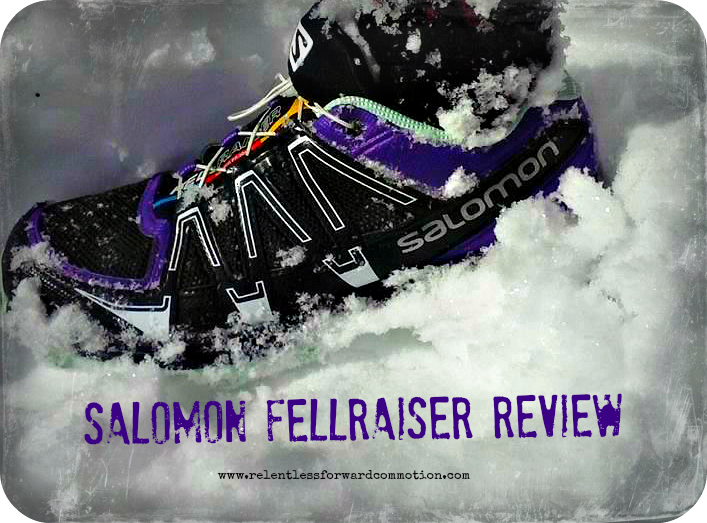 ahhh Vermont in the winter. There is a trail under there somewhere…

A few months ago, I received a pair of Salomon FellRaiser‘s to review.  The very first thing I noticed upon taking the FellRaisers out of the box was their aggressive tread, and thus, immediately after they arrived, they were added into my winter arsenal.  We have had a brutal winter here in New England, thanks in part to the “polar vortex”, and also simply because winter in Vermont is never typically sunshine and rainbows.  Needless to say, there is snow and ice everywhere.  And to be quite honest, a backup for winter boots was exactly what the FellRaiser’s became for a few weeks before I was able to take them out for actual test runs.  I’ve worn them daily, and so far they have held up incredibly well.

So..what is the FellRaiser?  According to Salomon: Inspired by a proven winner, the S-LAB FELLCROSS 2, the FELLRAISER is a low profile, lightweight, and fast-drying trail shoe for training in muddy and wet conditions. 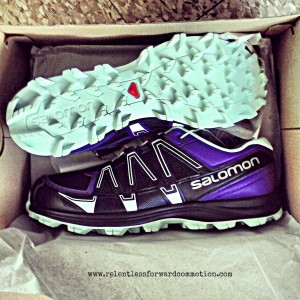 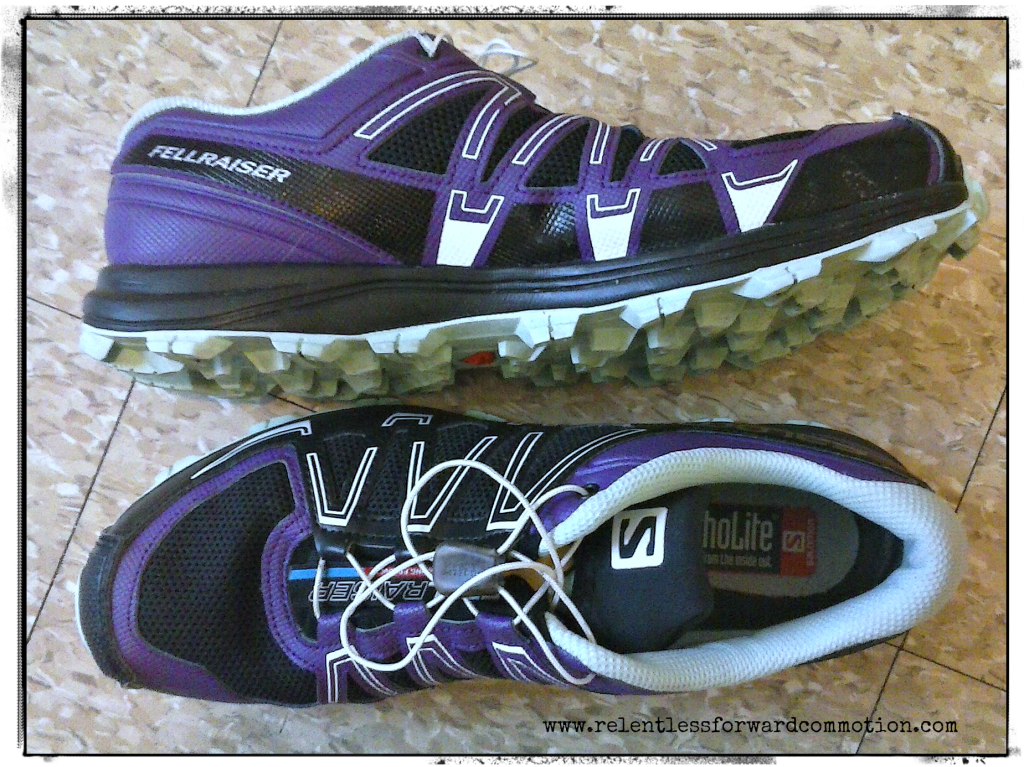 Fit:   I have a narrow foot, and this shoe fit like a glove.  Support exactly where I want it for a trail shoe (in the heel/upper area) but loose enough in the lower foot/toe box.  While I wouldn’t say the FellRaiser necessarily has an impressively wide toebox, there is still certainly enough room for my toes to splay comfortably.  As far as sizing goes: my size 10s were spot on. I would recommend ordering true to size.

While the FellRaisers  do have a 6 mm heel to toe drop, they did not feel overly built up.  As a runner who prefers low profile, minimal shoes, I didn’t feel as though the FellRaisers were any more bulky than what I would expect from a trail shoe.  I feel as though they are aggressive enough to tackle more technical, rocky trails, built up enough to protect my feet, yet still maintain a low enough profile that I didn’t feel like they were “clunky”.   (That said, it should be noted that the FellRaiser does not have a rock plate, a feature often seen in aggressive trail shoes.)

Lacing:  The FellRaiser features a quicklace system.  The laces are strong and durable and tighten with ease. However, my single complaint regarding this shoe:  I can’t loosen them very easily, which I suppose as far as performance goes, is a good thing. Having your shoes loosen mid run isn’t a positive in anyone’s book. However, trying to take the shoes off is a bit of a challenge for me.  Upon making this complaint to Geoff, he was able to loosen them with ease (a small button on the lacing mechanism) so perhaps I just have weak fingers.   Complaint over.

Tongue:  Not something I typically point out in reviews, but the tongue on this shoe is MASSIVE, which I’ve found helps keep stuff (like snow!) out of the shoe. I imagine it will perform just as well with rocks and dirt…you know, once that all thaws out.  The tongue is very soft and covered in a neoprene like material, thus wasn’t distracting in any way, nor do I imagine would cause any chaffing.    Further, the tongue contains a small pocket designed to tuck the top of the speed laces into so they are out of the way. 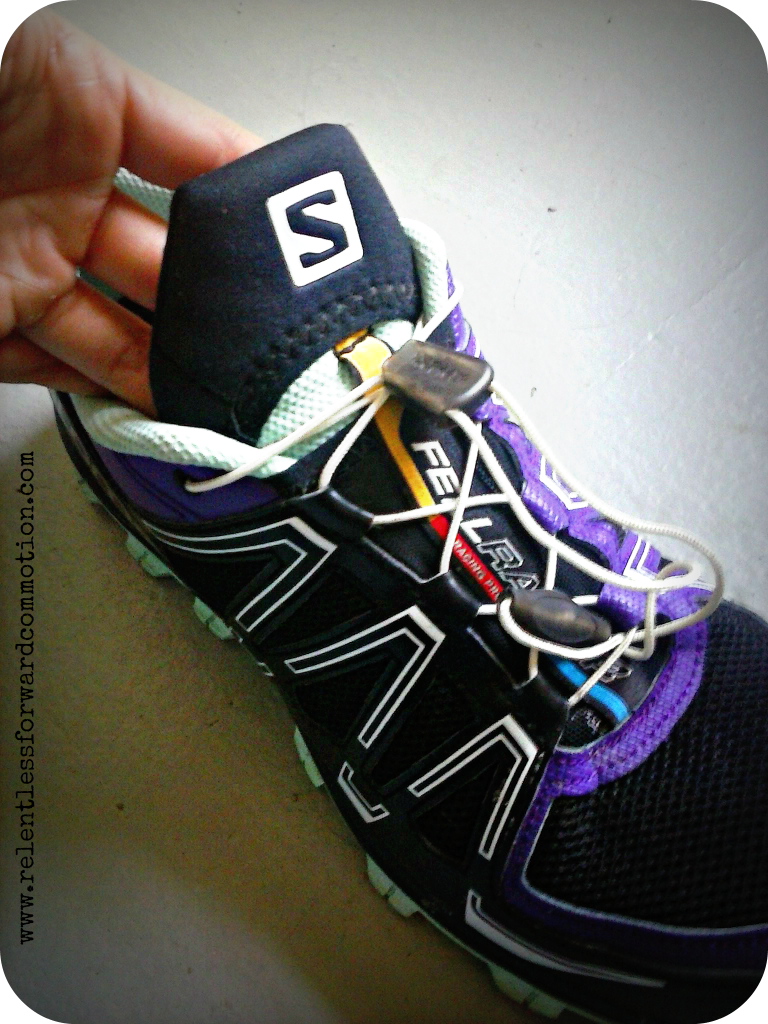 Trail Performance:   As mentioned above, these shoes have been my  go-to “walking around town” shoe for the past few months, as everything here in the Vermont tundra is covered in snow and ice, or slush on a warm day.  I felt more comfortable in these shoes than I did with a regular pair of boots covered in Yak Trax.  The lugs on this shoe are amazing, and unlike anything I’ve ever run in before. That said, despite their size, they do not feel uncomfortable underfoot.

As far as running goes, I would LOVE to tell you how they perform in the mud and dirt….except that would require this post being put on hold for another few months.  For now, all of my local trails look like this: 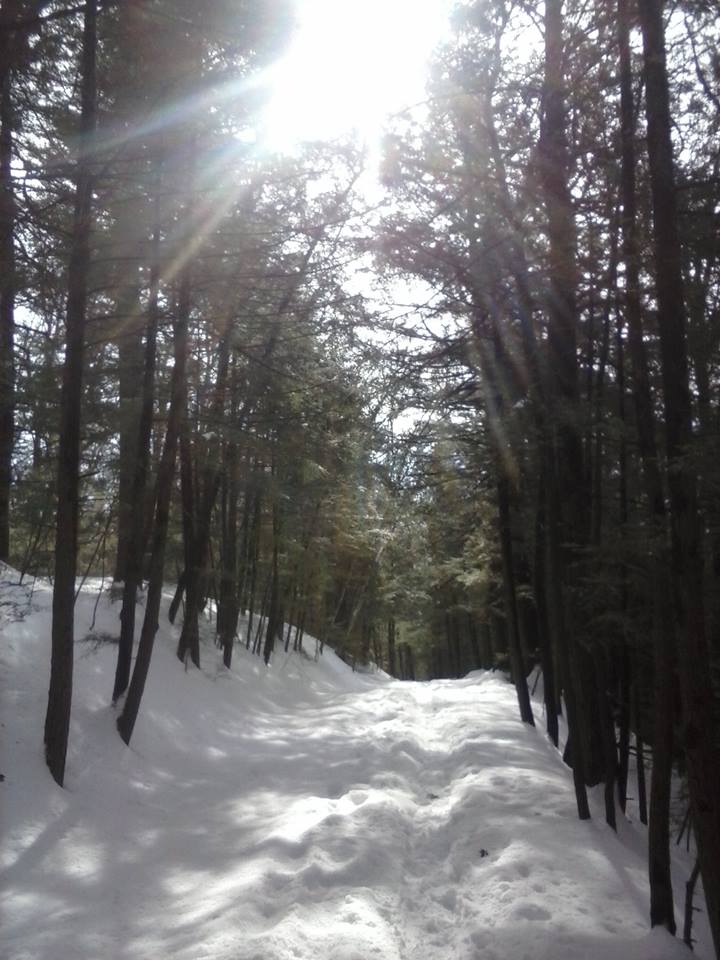 (UPDATE:  have worn them numerous times since the snow melted, most notably in the rough terrain of the 7 Sisters trail race.  They performed impeccably). Now, as anyone who runs in snow can tell you, snowy conditions can vary as greatly as varieties of mud and dirt. The first time I took the FellRaisers for a test run, I covered about three miles on what was once powder, but had since melted into *perfect* “snowball snow”.  Yes, that is the technical term.  Wet, slippery, packs well.   I covered many hills, both up and down, with snow conditions varying from packed to knee deep,  and did not slip once.   To say I was impressed with the aggressive traction on the sole of the FellRaiser would be an understatement.

As mentioned above, the quick lacing system held tight the entire time, I have never had an issue with these shoes loosening during a run.

I cannot, at this time, review how these shoes perform while wet (drying, draining, etc) because as mentioned, everything is covered in snow.   However, the shoe is certainly breathable, which leads me to believe it will perform incredibly well during the warmer months.

AESTHETICS:  Sporty and eye catching, I like them.  Sure, that’s completely subjective, but I will also say that I’ve received a ton of compliments on them as well, for whatever that’s worth.   Both the men’s and women’s styles come in a variety of colors.  Not all options displayed below, but here is a sampling:

SUMMARY:   Light weight, especially for such an aggressive shoe.  Incredible tread. Low profile.  Durable.  I would recommend these trail shoes for someone tackling a technical, snowy, muddy trail as opposed to well packed, smooth terrain, as they are *slightly* more bulky than other trail running options.   I look forward to testing these shoes out in the warmer months, and taking them for a test run through an OCR course, and I’ll update this review at that time.

Any questions regarding this shoe?  Please comment below, and I will answer to the best of my ability.

Disclosure: Salomon provided me with  pair of FellRaisers to review at no cost to me, however, all opinions stated are my own.