Last June my family made the best $75 investment we could have ever imagined: we bought a South Carolina State Park passport.  On a local scale, what that meant was that we didn’t have to pay $5 per person every time we wanted to leave the crowded beach fronts of Myrtle Beach, and instead head for the quieter shores of Huntington State Park.  On a larger scale, it meant that for 365 days we were able to get into any one of the 47 South Carolina Sate Parks at no extra charge.

We essentially “paid” for the pass with beach visits in the first two weeks.

With our passport we were also given  the official guide to South Carolina State Parks, which is where we first learned about the Ultimate Outsider Challenge.   The premise of the challenge is relatively simple: Collect a stamp in your guide book at each of the 47 South Carolina state parks you travel to.  Once you visit all 47, you submit your guide book to a SC park ranger for approval, and then you earn an Ultimate Outsider t-shirt.

We’re a running family.  Obviously completing challenges for t-shirts (or medals) is what we do best.  We’re in. 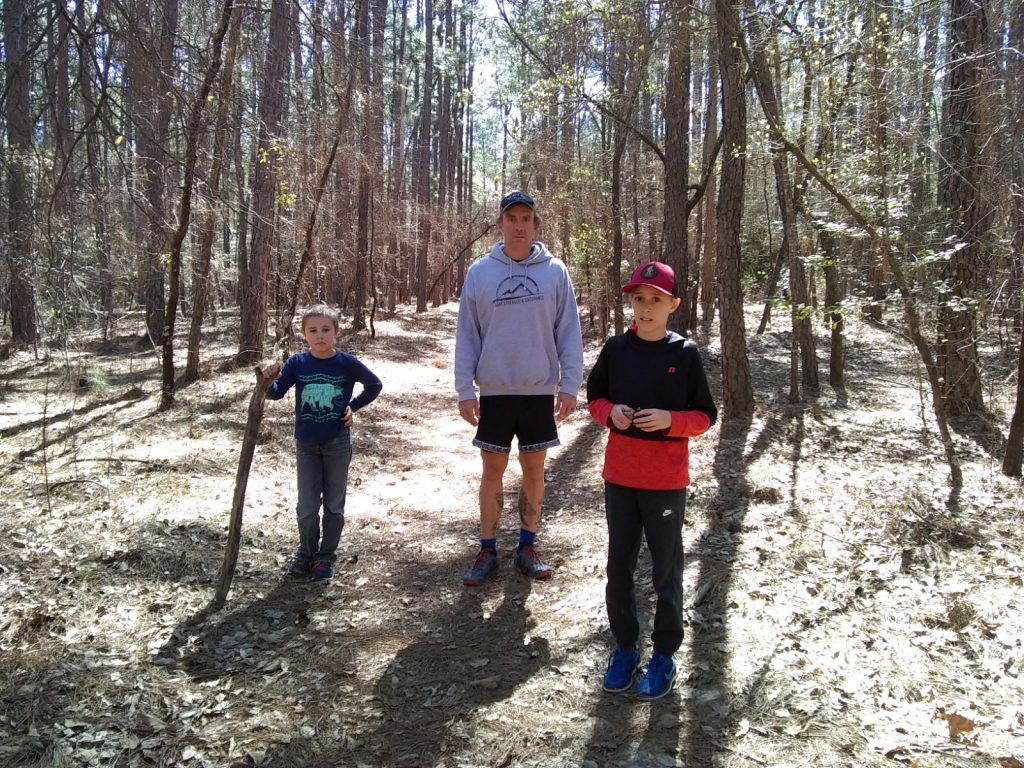 Last year, however, our plans were thwarted by the fact that South Carolina is a relatively large state (some of these parks are nearly a 6 hour drive from us) and our car at the time suddenly became far less reliable (to give her credit, she was 12 years old), and we just weren’t comfortable taking her too far from home.

I’m not sure if I mentioned it on the blog yet, but after my father passed away last October, we decided to purchase his new Subaru from my mother.  It has to be one of the most bittersweet things in my life right now: we have a kickass, reliable adventure mobile, and a physical, tangent object that reminds me of my dad every single day.  Yet we only have it because he died.  Which totally sucks.  But I keep reminding myself that my Dad would love NOTHING more than knowing that his car is now literally a vehicle for his grandkids to go on the same sort of adventures he used to take my sisters and I on when we were younger.

Close to home we have two state parks: Huntington Beach and of course, Myrtle Beach State Park. Yesterday, however, the weather was supposed to be nice, we had nothing planned (for once), so we decided to officially start our quest and head to the next closest park: Little Pee Dee State Park, in Dillon, South Carolina. 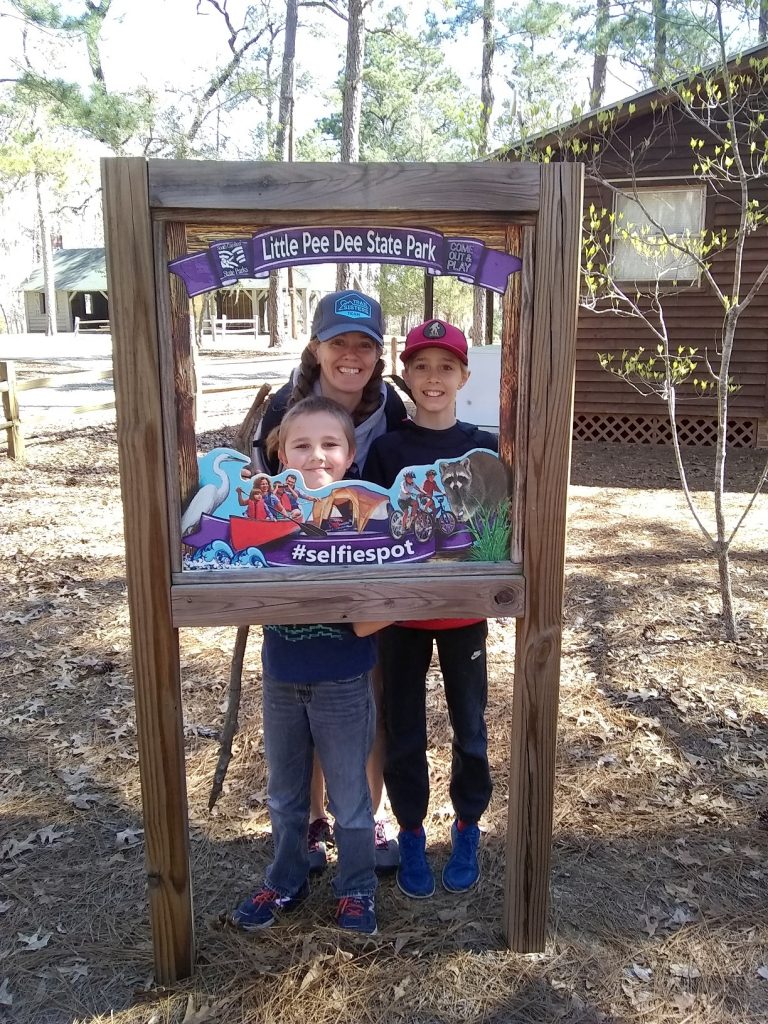 Little Pee Dee is one of the smaller state parks in the area, featuring:

Unfortunately, due to a dam breech during Hurricane Matthew (fall of 2018), there is no water in Lake Norton, as of this blog post.  But that didn’t phase these adventurers, because as you probably know by now, we are a bunch of dirt loving trail runners.   So with a car packed with a picnic lunch and outdoor toys, we headed Northeast to Dillon.

GPS found the park easily, and even drove us through some local(ish) towns we had never been to before.  I love road trips.  There is no admission to the park, so we were able to drive right in and head down towards a parking lot near where the boat dock would be, if the lake was full.

We spent the next few hours exploring, and simply enjoying being outdoors. 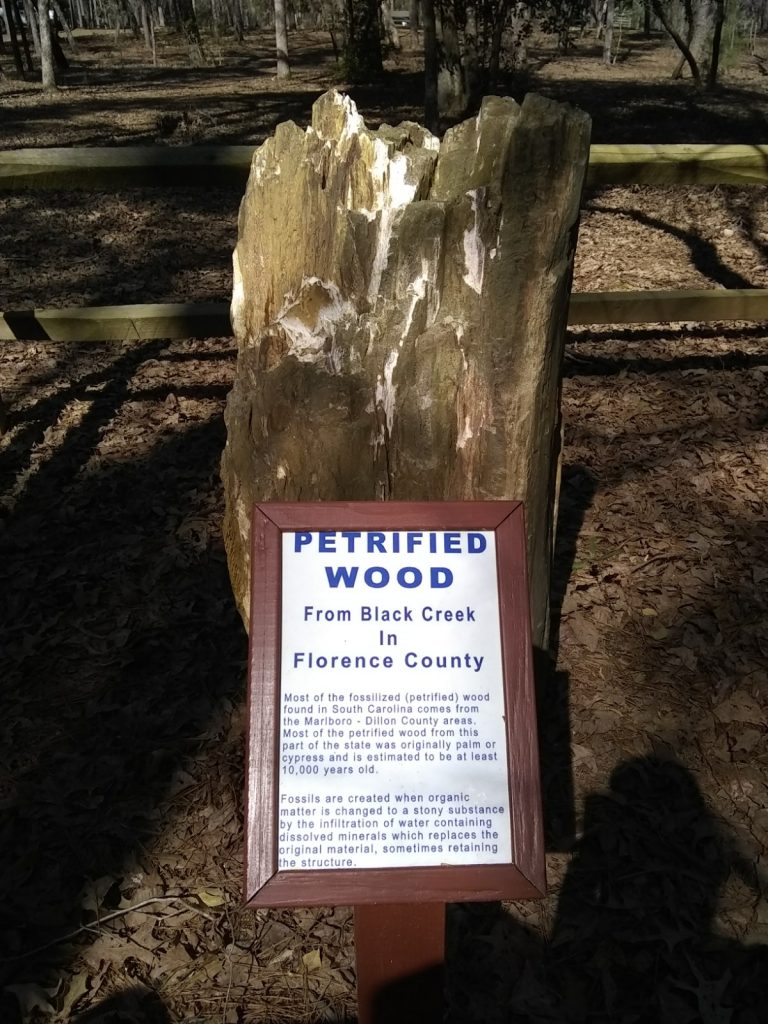 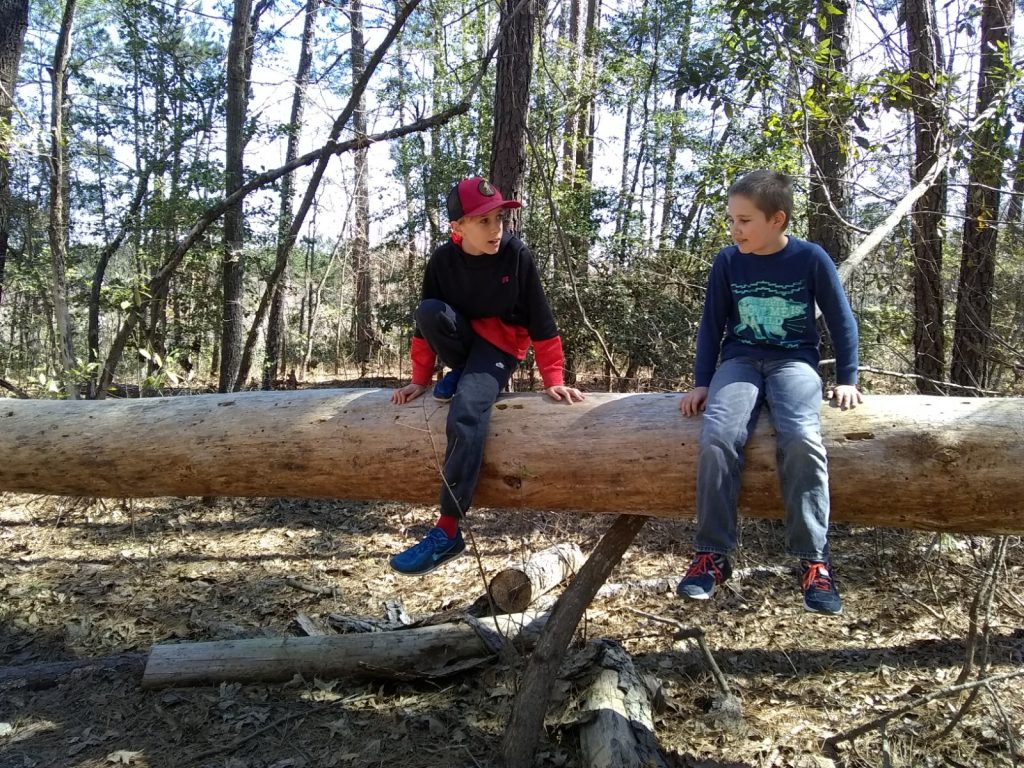 Of course, one of the first things we did was explore the Beaver Pond Nature trail.  This trail covers approximately 1.3 miles on either side of the park’s main road.  It’s a wide, soft, non technical trail that would make the perfect short hike or run for people of all abilities. 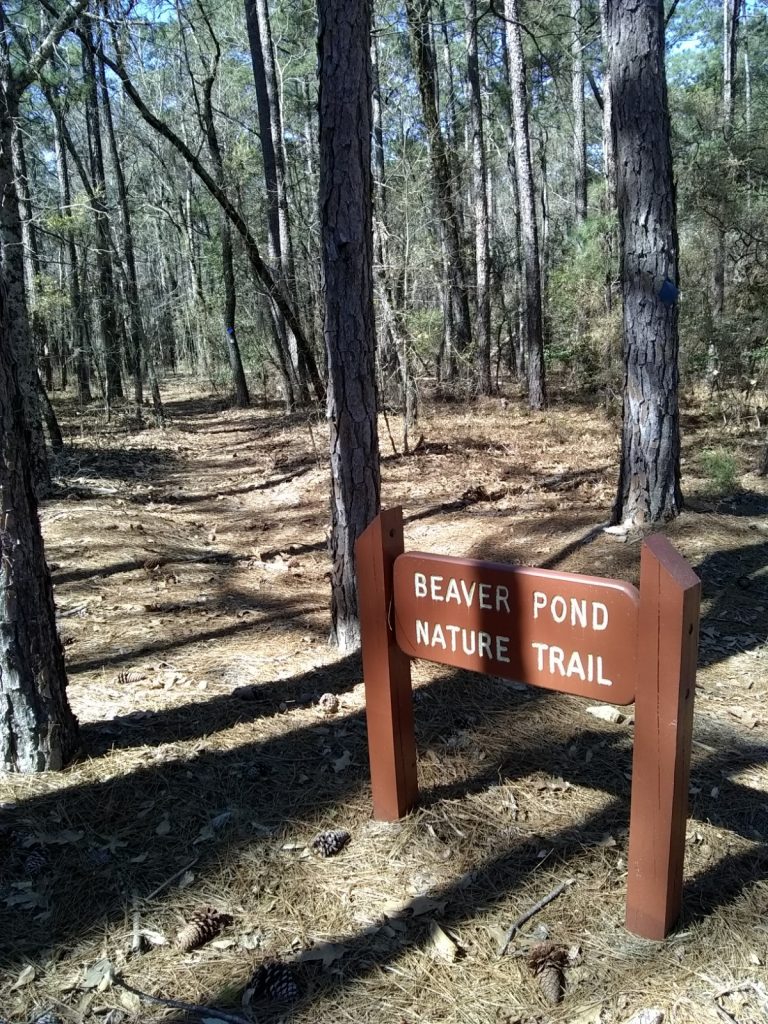 The trail is clearly and impeccably marked, making it easy to follow, even for those with novice trail following skills.  And it does, in fact, pass by a beaver pond. 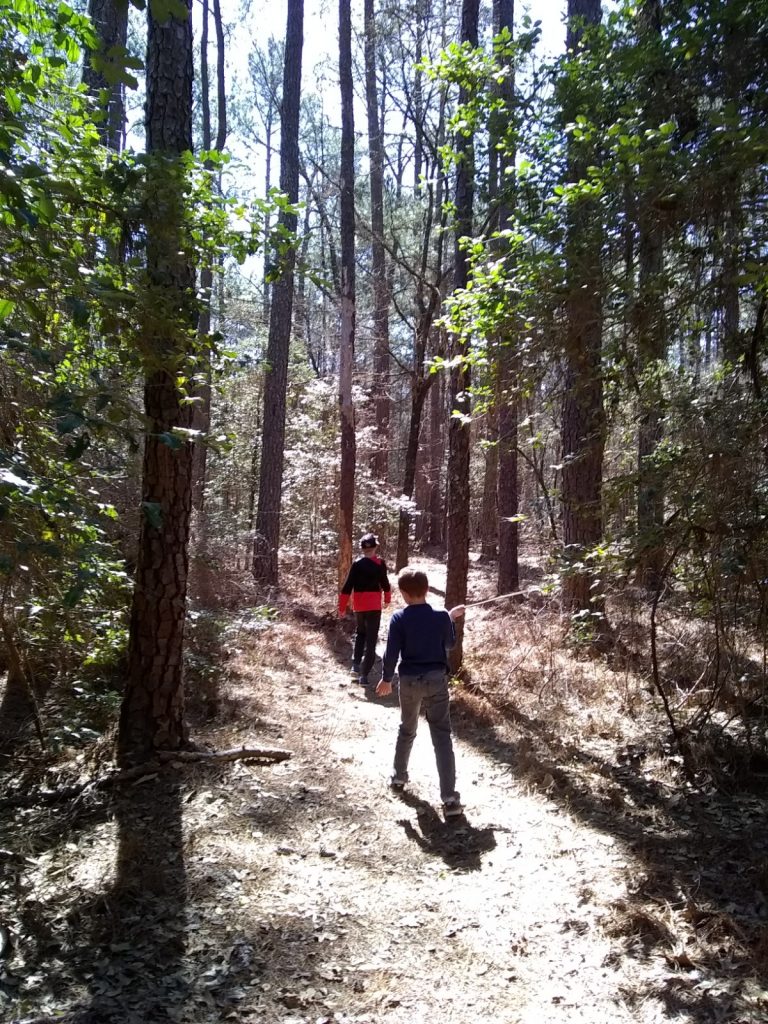 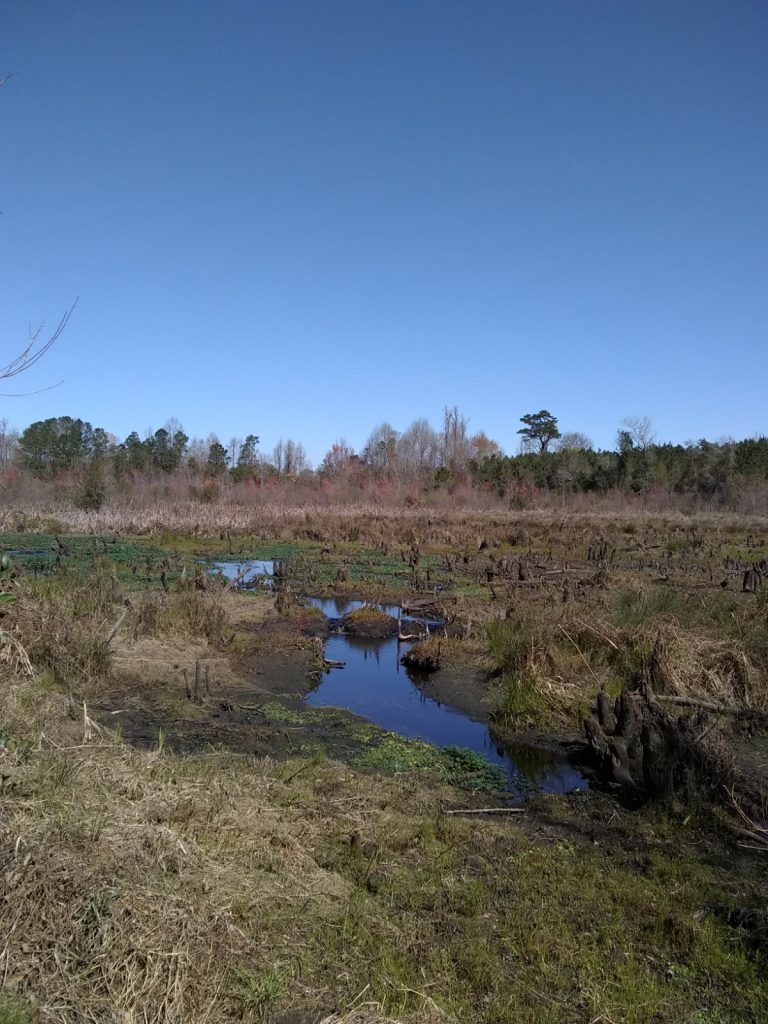 There isn’t necessarily a lot to do at Little Pee Dee if you are the type that needs entertainment.  But if you are perfectly content enjoying the outdoors, fresh air, and open spaces…this is your park. We enjoyed lunch in a sunny field next to a large picnic shelter, and spent an hour or so perfecting our “koosh ball” and hackey sack skills.  It’s a tough life we lead on the (non racing) weekends, I tell you what.

And that’s about where our adventure took a turn. 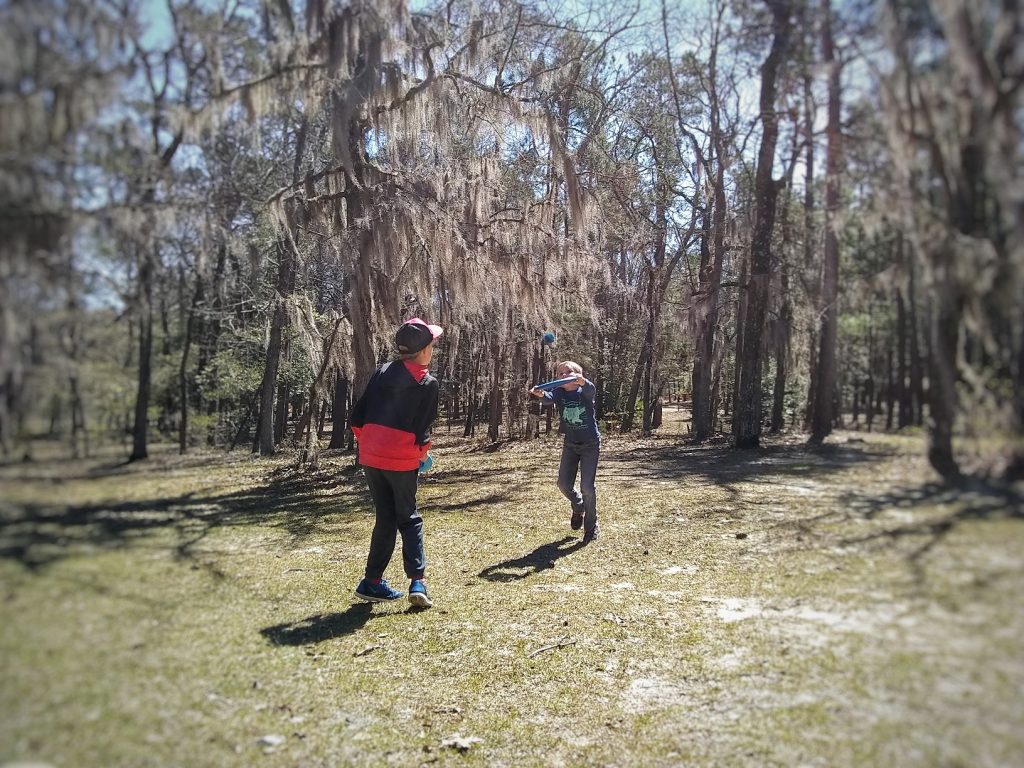 We headed to the playground to let the kids burn off the last of their energy before we drove back home.  After a few minutes, both boys headed over to the swing.   Geoff and I sat at one of the picnic tables, keeping an eye on them both.  Kain, my ten year old, jumps off the swing, as kids have done probably since the beginning of the invention of the swing.  He lands on his feet but immediately whips his hand up to look at it.  I can tell by his pause that something is wrong, and even say to Geoff “watch, he’s going to come running over”.   Of course, I figured it was a minor cut, maybe a bug bite, or other typical playground incident.

Sure enough, he comes running.  But from even 20 feet away I can already see the blood gushing down his arm.  Uh oh.  As he thrusts the hand in my face I’m immediately taken not by what I see, but by what I DON’T see.  And what I don’t see is the whole top third of his pinky finger.  It’s gone.

Kain gave me permission to share this story, yet still I won’t go into a ton of detail, but instead I’ll give you the rundown:

In a total freak accident, we can only guess that his finger somehow got pinched in the swing, and the combination of that, plus his jump, tore off the top of his finger.  We’re not just talking the finger tip, but literally the first 1/3 of an inch or so, well below where the fingernail once was.

6 hours in the emergency room later, my little dude had some of the bone of his finger amputated by the doctor (about to the top joint) so that they could literally sew up what was left of his pinky finger.

I had told my guys that I wanted an adventure, but I’m not sure if I mean to that extent!

I contemplated posting this incident on my blog, because it’s my son’s story, and not mine.  Ultimately, I wanted to share FOUR important things:

1. The other parents at the playground, the staff at the emergency room, and even some locals we met while we were there, we all absolutely incredible. I cannot thank the people we came into contact that afternoon enough for their kindness.  Dillon, SC, you are amazing.

2.  Upon reaching out to the state park to let them know what happened, they told us that they are immediately installing the plastic covers that go over swing chains.  Their thoughtfulness and follow up was incredibly appreciated.   Let me be clear: I do NOT blame the park for this incident. It was such a random and unfortunate thing to happen.  Let’s be real, how many times have we all jumped off swings, and landed unscathed?  THOUSANDS of times in my lifetime alone.  Before we drove to the ER, I checked the swing quickly and found absolutely nothing out of place, no sharp spots, nothing other than a normal swing.   Which leads me to my next point:

3. Parents: though again, I believe that this was a freak accident, it might be worth warning your kids about the dangers of those chains on swings, and to just be aware of where they place their little fingers.  And if you have a swing set of your own: buy the plastic chain covers.

4. My son is the bravest, strongest, most badass little human being I’ve ever met.  Holy cow, I have a new hero and source of inspiration. He handled that whole thing better than I EVER could have, and has continued to handle it with strength and humor.

Kain is in GREAT spirits about the ordeal, and seems to be just fine with the idea of living the rest of his life with 2/3rd of his pinky finger…though he said it might be a while before he hops on a swing again.

So, needless to say, our quest for the Ultimate Outsider is off to an interesting start.  Here’s hoping the next 44 park visits are significantly less dramatic!