Most of my race recaps as of late are essentially reviews of the event itself.

Not this time.
If you want to know how I felt about the Rugged Maniac this weekend in Southwick, MA, my opinion goes a little something like this:  the course was fun, not terribly difficult, and way too crowded.  Great shirts, no medal, awesome beer (Harpoon), not nearly enough mud.  But bottom line: a reliable source has informed me that the race (Rugged Maniac) that initially advertised  their new series “The Great Bull Run” (I refuse to even give them the benefit of a link, so read this instead), then backed out and said they were just promoting “for a friend” when they received a good bit of social media backlash, are indeed, the purveyors behind the Great Bull Run.  Animal exploitation for human entertainment is despicable.  Lying to your customers to keep them on your good side isn’t a flattering trait either.  So that is the last you will hear me speak of Rugged Maniac around here.
Instead, today I’d like to tell you another story.
Last week I, along with many of you, read the article “The Slowest Generation“ that appeared in the Wall Street Journal.  In case you haven’t read it, let me sum it up for you: the author feels that the significant increase in overall finishing times at races is due to younger generations lacking the desire to push or better themselves, and instead settling with the sub-par satisfaction of “just finishing”.

I am no elite runner, but I can certainly hold my own with what I consider decent race times and pace averages.  Yet, the WSJ article still felt like a slap in the face.  “Just finishing” is such an incredibly relative term, it amazes me that someone could use it in such an insulting manner.

I’d like to tell you what “just finishing” looks like.
“Just finishing” is the  mother of three grown children, defying societal norms by competing in her first obstacle course race at age 60.  The same woman who passed men half her age on the course, and scaled wooden walls that women 1/3 of her age needed assistance to get over. 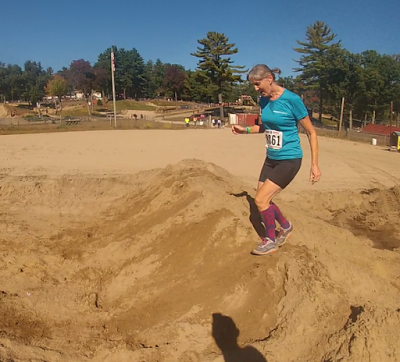 “Just finishing” is the 36 year old who tuned out all of the naysayers who said he couldn’t do it, and busted his ass all summer to get into shape for his first race ever, only to realize that during that race, he would have to tackle his greatest fear ever: heights.  He tackled them anyway. 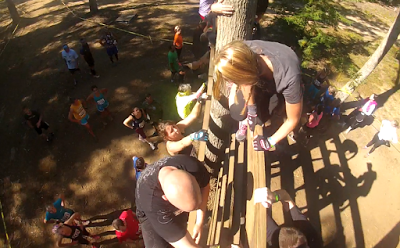 “Just finishing” is the young 40 something business woman who sacrifices countless hours of daylight towards her career, but gets to spend one day of the weekend letting loose and having fun in a healthy, productive way. 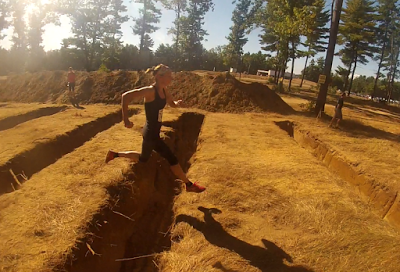 “Just finishing” is the family who chooses to frolic through the mud together at a novelty fun run (or “parade”), the type the author of the WSJ article scoffs at, supporting  and encouraging (and laughing at) each other the entire way.  Not to mention, doing something productive and healthy, while making memories that will last a lifetime. Take a look at the average dysfunctional “family” in our society today, and tell me that we all couldn’t use a little more of that. 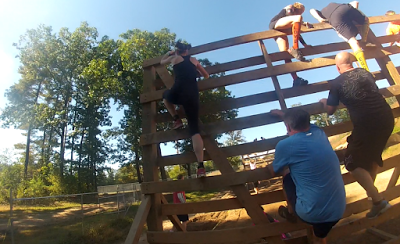 Last week, when I first read the article, I couldn’t shake the feeling of discontent and utter disagreement with the author.  I debated the topic over a few forums and Facebook posts, but still wasn’t certain as to why it bothered me so much.  This weekend, it finally made sense to me.
Because sometimes, “just finishing”  is enough.   What appears to be “just finishing” to one person, may have been the culmination of a million personal struggles, a thousand fears, and a hundred attempts before finally succeeding.  “Just finishing” gives others, who may have never in a million years thought to step up, the courage to try and “just finish” themselves.
I’m incredibly proud of what I witnessed this weekend, regardless of the fact that it may have taken our newbies 30 minutes or 300 minutes to “just finish” that course. (And for the record, they didn’t just finish, they demolished it, tackling every single obstacle without hesitation nor complaint).  But it goes beyond my friends and family: in the past 6 years of my race career, I’ve seen countless other stories of people who have pushed their personal limits past what they ever believed possible to accomplish great things.  Perhaps not fast finishing times, but amazing feats none the less. What I love the most about the endurance world is the fact that in the end, we truly are racing only ourselves.  To be better than the person you were yesterday is one of the most amazing things anyone can ever hope to achieve.
Because sometimes,  “just finishing” is the first step to so much more.