Pulling in to an empty parking lot at the trail head first thing in the morning is a mixed blessing.   On one hand, I crave the solitude.  There is nothing quite like watching the sun rise over the trails, with only the sound of your footsteps and the chirping birds, as your body and the world seemingly crawl out of sleep and come to life.  On the other hand, being the first one on trail means you’re undoubtedly going to get a face full of spider web, at least once, and there’s not a damn thing you can do to prevent it.

I desperately wanted to sleep in Sunday morning. 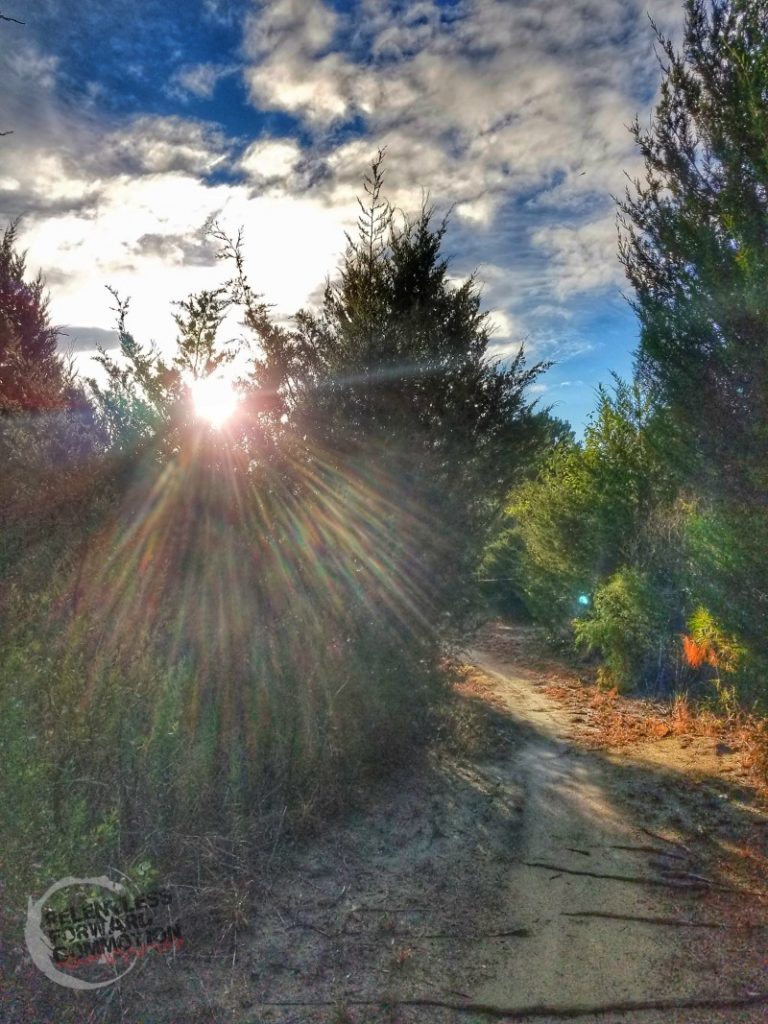 The alarm went off, I groaned, hit snooze, and had the all to familiar internal debate over whether sleeping in would be the “right thing” to do.  I went through all of the logical justifications: I only got 5 hours of sleep Friday night.  My body is still recovering from surgery.  Rest is a vital part of a training routine.  Sunday is my only day to sleep in.   Each reason repeated over and over in my head felt less like an excuse and more like a very valid reason to stay in bed.  Yet each reason was quickly shot down by the quite voice that kept repeating:  It’s only going to be in the 60’s this morning…go run.  You won’t regret it.

A freakishly cool morning for Myrtle Beach in July is exactly what drove me out of bed.   When temperatures typically hover in the 90’s with 90% humidity, even first thing in the morning, 67 degrees and 60% humidity is practically sweatshirt weather here in the South.   You absolutely cannot waste such a cool morning NOT running.  I’m almost certain that’s written in the running by-laws or something.

So I stumble out of bed, feed our zoo that now consists of two rabbits, two cats, and a giant goldfish, force an English muffin and some form of caffeine into my carbohydrate hole (that’s my new term for mouth, try it, it’s fun to say), and fail miserably at trying to tiptoe quietly around the apartment as to not wake up the husband and kids.

And then I head to the trail.

When I arrive, there are two cars in the parking lot already.  I see no obvious evidence of bike racks or anything else that would lead me to believe they are mountain bikers, so I think two runners have beaten me to the trails.  “Sweet”, I think to myself “no spider webs!”  I know many of you have very adverse reactions to snakes, spiders, and all of those other creepy beings, so I’ll spare you a picture and instead tell the fearless half of you to google “yellow garden spider”.  These are the mighty web building beasts we are up against on our local trails.   They can throw together a web in the matter of minutes, and what they build overnight can stop a grown man, or in this case, woman, dead in her tracks.  While spiders in general don’t bother me, there’s nothing fun about suddenly feeling the sticky strands of web wrap across your body.  What’s worse than being tangled in the web is wondering where the giant creature who built it might currently be.  In the trees? Still in the web? IN YOUR HAIR?  Spiders are not conducive to keeping your heart rate in any sort of targeted “easy” zone, that’s for sure.

There are a lot of things I have to worry about on the trail.  Being out there alone, for one, is an unfortunate worry and reality of being a female runner.    Trying to not fall, get hit by a mountain biker, or get bit by a snake, also regular concerns of mine.  I don’t have to worry about getting lost on this particular trail, as I could run it with my eyes closed (just kidding, I’d fall or run into a tree. But I wouldn’t get lost.). But I do often worry about trying to give directions to emergency personnel if something DID happen to me.  My mind frequently searches for “outs” on the trail, places where I could shortcut to the road, or someone could find me, in a worst case scenario.  Sadly, my mind often searches for “outs” incase I find myself in an unfavorable situation with another human being.  I don’t let fear get the best of me, but again, this is a necessary reality of being a female runner.

Needless to say, not having to worry about a 3 inch spider getting caught up in my trucker hat is always a nice worry to take off of my plate. 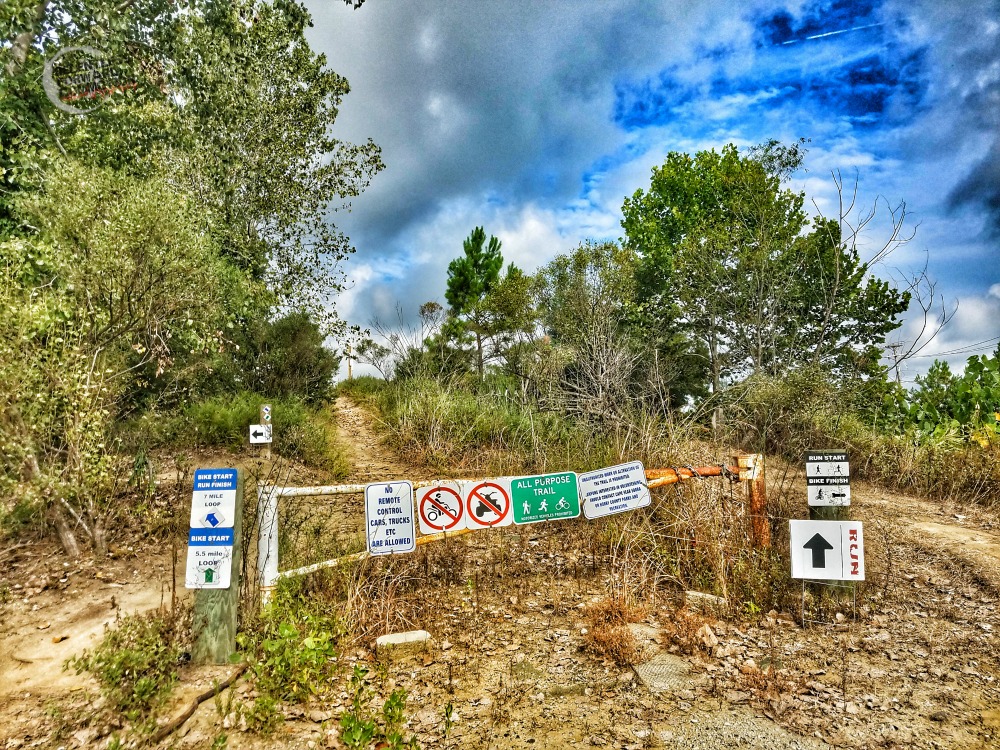 The temperature on this particular morning is AMAZING, just as the weather forecast had predicted, and I’m smiling from ear to ear.  Making this post surgery comeback has been equal parts exhilarating and frustrating.  But I am convinced that this cooler weather will give me a much needed break and allow me to push just a little harder, just a little further.

I’m struggling right from the start.  Maybe it was those two IPA’s I had the previous night, after having gone a solid week without a drop (of alcohol) to drink.  Maybe it was delayed onset muscle soreness from Friday, where I took my new mountain bike out for it’s first spin.  Did I mention I got a mountain bike?  It’s pretty great.   Maybe I’m just impatient as hell, and want to get back to where I was this past spring, before the hernia wreaked havoc to my summer plans. Whatever the reason is, I’m sucking wind despite the gorgeous weather, dragging along legs that feel like they are trapped in cement shoes, and I’m frustrated.

I continue topush through.  The first few minutes always hurt anyway, maybe today was no exception.   Run. Walk. Run. Walk. Walk some more.  It’s not getting easier, if anything, it’s getting worse.  A mile ticks by.  Then two.  My breathing becomes more labored, my legs even heavier.  I struggle.  Get frustrated that I’m struggling to run a pace I could probably walk. Get ready to throw a trail runner temper-tantrum and throw in the towel.

And that’s when I not only got tangled in a huge spider web that I did not see, but I got spider web in my eye.

It was so horrible and awkward and uncomfortable to feel a strand of fine spider web touching my eyeball that I couldn’t do anything but flail around…and laugh.  The ridiculousness of having a spider web IN MY EYE (let me emphasize that one more time) snaps me out of my “woe is me” mood and back to real life.  And my life? It’s pretty freaking great. Once again the universe handed me a solid dose of reality and humility. 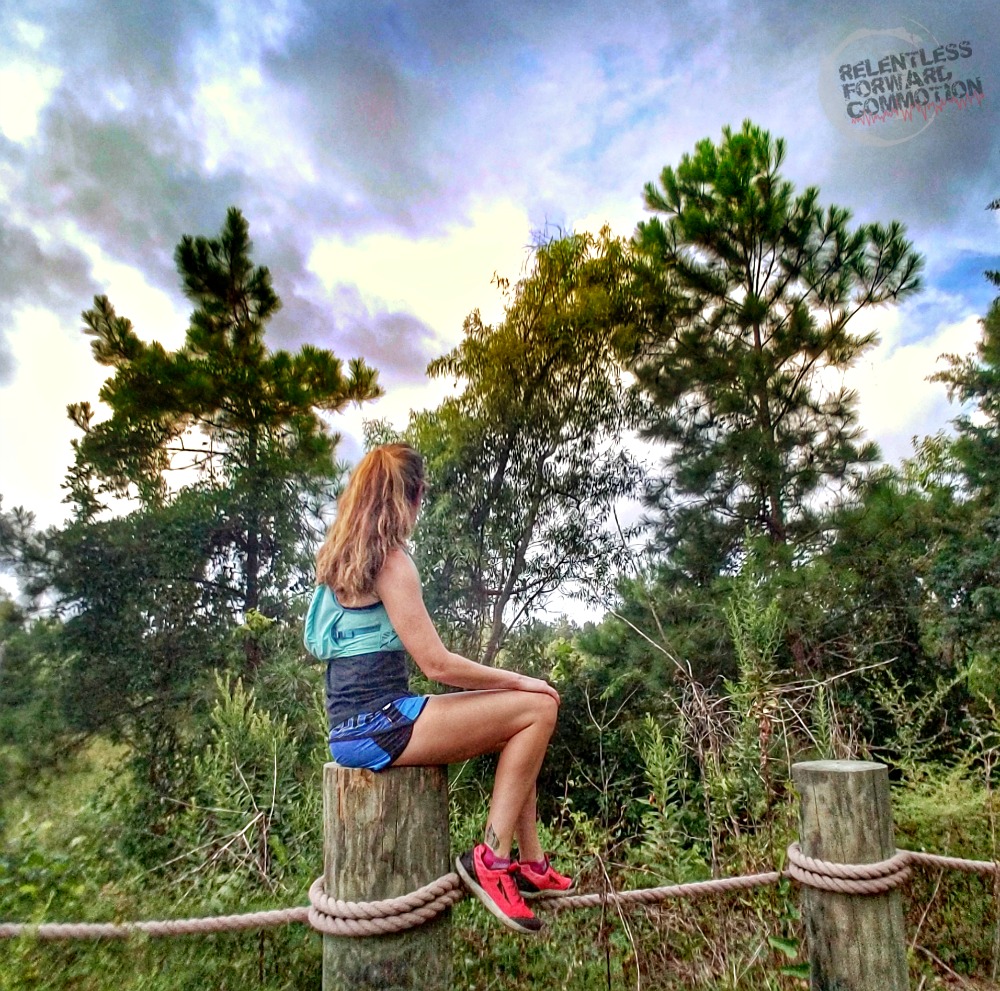 I often stop and truly analyze the “problems” I have in my life, the things that cause me stress.   Some of those reasons are valid stressors of being a human adult in a crazy, sometimes cruel world.  Others are first world problems, as first world as they come (example: the other morning my blood pressure was rising over the fact that I could not figure out why my Garmin wouldn’t Bluetooth connect to my smartphone. Boohoo.)  This struggle of trying to make a “comeback” with my running endurance and speed is certainly trying on my patience, there’s absolutely no denying that.  It’s also a struggle that I need to learn embrace.  How fortunate am I to be able to be out in the woods on a gorgeous day, doing what I love to do best…no matter how fast or slow?   Very.  Very, incredibly, fortunate.  Sometimes the struggle makes the reward that much sweeter in the end, and I know I’ll get it back soon.

I finish off my morning mileage with an easy stroll, smiling as I feel the sunshine on my face. Thanks for the inadvertant reminder of how awesome life is, spider.  Sorry about your house.