My day started at a LATE 5:00 am, which if you have ever run a Disney race before, you will know that’s considered sleeping in. Typically the prince and princesses of runDisney have alarms set for 3:00 or worse, to get their day started and race before the parks opened. This morning, I actually was up BEFORE the alarm.  I donned my 5k outfit, grabbed the breakfast I had stashed away the night before (no pre-race boxed breakfast at the cafeteria like they have before the bigger races this time…I was bummed about that, but I guess it was only a 5k after all) and tiptoed out of the hotel room before I could wake anyone up, then headed to the front of the AllStar Music resort (one of the race weekend host hotels) to catch a bus.

First thing I noticed:  I was one of the few awake.  The bus didn’t come close to filling up before it departed and took us straight to Animal Kingdom.  Buses ran from 5:00-6:00 am (race start at 7:00) and apparently I was an early bird.

So what did I do first? Got in line for my Mickey & Minnie picture.  Though the parking lot was still pretty sparse, it seemed everyone that HAD arrived already was in this line…so I figured I better get in line too.  You can never hug the mouse too many times in one trip. 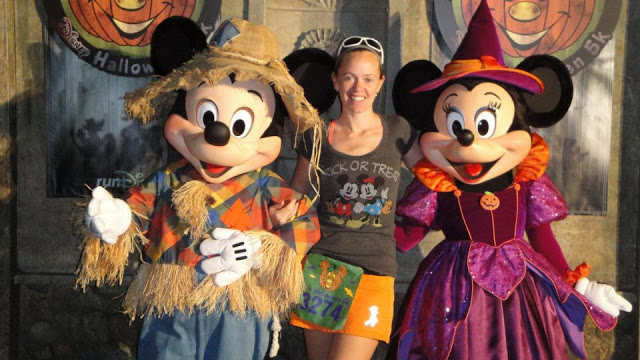 There was a great DJ playing fun music to keep us warm, but for the most part, there was a lot of standing (or if you were lucky to score a spot on the bleachers…sitting) as we waited for the race. 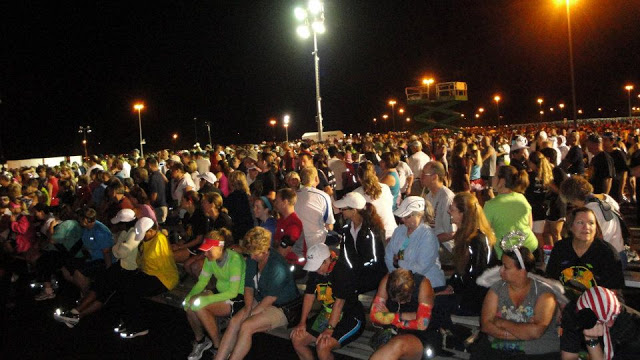 Now, here is the thing about Disney 5k’s that is great for most, but probably not ideal for some: they are completely, 99.5% (because they do have an overall female and male winner) uncompetitive.  No timing chips, no age group awards.  This is incredibly ideal for those looking to do their first race.  When the DJ asked the crowd who was doing their first 5k that morning, a huge roar came from the crowd.  I certainly can not think of a better place to run your first race!  Now, this lends into the next part that I found funny. When it was time to line up for the start….NO ONE would go near the starting line.  OK that’s a lie, there were a few toeing the line ready to race.  But between them and the rest of the sub-6:00 mile corral (unregulated) were some little kids, and a few that I don’t mean to judge, but the denim jeans and backpacks signaled to me that they were not out to “race”.
So…I moved towards the front. I wasn’t out to PR or anything, but if no one else was going to take the space, I would.
This proved to be a bit of a loss for me. Not because I got passed by a ton of people or got in anyone’s way. Quite the opposite really.  But the problem was…apparently the characters on the course weren’t ready for the faster 5k runners, and I was totally bummed about it.  Seriously, I saw a monkey (from Jungle book) and some gravediggers just before the finish line. And that was it…believe me I was on the lookout with my camera ready too.  I ran a 26:xx (I can’t find the race results ANYWHERE) which is by no means a fast 5k, and a good 5 minutes off from my PR.  Just a comfortable pace.   I was ready to really be disappointed in Disney for their lack of characters at a race, until later in the day I heard from others towards the back of the pack that they saw plenty of other characters.  So what gives Disney? 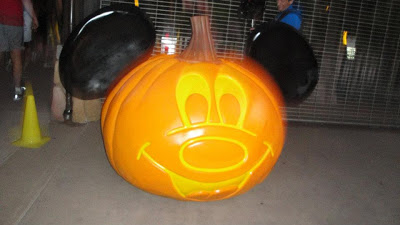 Anyway, the 5k went by pretty fast as 5k’s usually do. I was given my medal (which, lets be honest, is what I really showed up for in the first place), water, powerade, and a goody bag full of food.   Asked a stranger to take an obligatory finishers picture, and then I headed for the bus. I wanted to get back to my family. 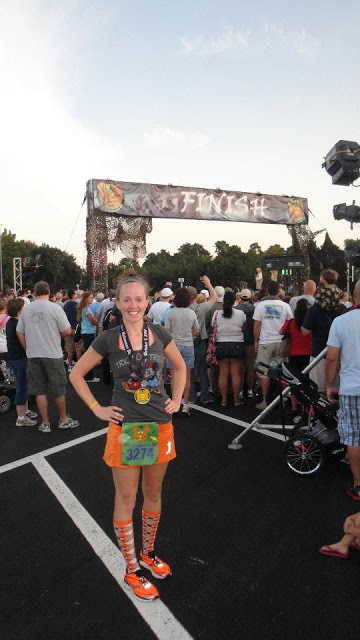 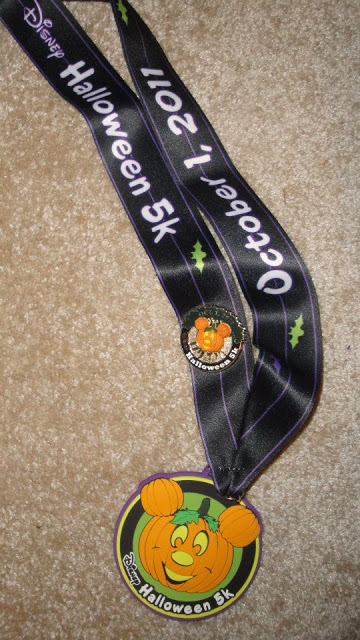 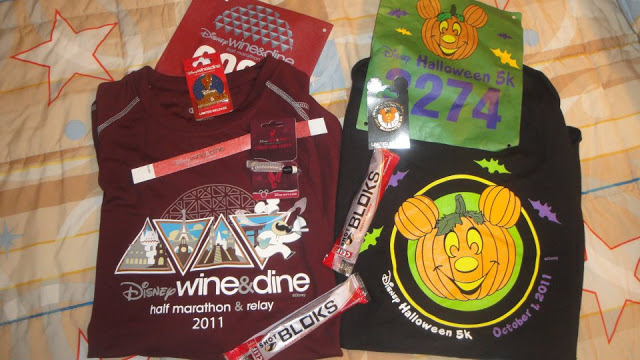 All in all, it was a fun race.  Running through Animal Kingdom was pretty cool, especially past Mt. Everest.   Transportation was a BREEZE and the pre race entertainment was fun.  My only complaint was the lack of characters for those of us in the front, and that a few areas (such as a walkway from the parking lot to the entrance) were really narrow and caused a slight bottleneck effect.
But I’d still run it again 🙂