There has been much discussion as of late regarding the sustainability of the obstacle course racing world.  In the beginning, the popularity boom of the sport resulted in what seemed like new companies and races popping up every single day, with grandeur claims of being the “best race yet”.  Unfortunately, as race entry numbers begin to dwindle, events both new and established alike are running out of money, canceling races, and even declaring bankruptcy, while leaving registrants completely out of luck regarding refunds.  While this is typical of any passing fad, the reality is, many dedicated athletes and obstacle course racers aren’t going anywhere, and are left wondering what will become of our sport.

One of the many suggestions I have heard is the possibility that while only a handful of big, nationwide series events will survive, it will be the smaller “mom and pop” races that become successful on a smaller scale.  While it may only be a once or twice annual event, these races and race directors focus on delivering their customers, be it a small population, a quality, fun, well executed race.  (Versus companies who try to crank out nationwide series, get tens of thousands of registrants, end up in over their head, and fail to deliver. )

Now, getting to the point of this post:  BoldrDash was absolutely one of the aforementioned local, small, yet nearly perfectly executed obstacle course races.  This race delivered MORE than many of the larger events I’ve been to, and I’m absolutely thrilled to give it a shiny gold star/”A” rating from the Relentless Forward Commotion crew.   So, on to the review:

BoldrDash is a three year old 5K distance event based out of Rhode Island, that holds two events annually: a spring event at Misquamicut Beach in Westerly, RI, and a fall event (the one we attended) at Yawgoo Valley Ski Area in Exeter, RI.  The race itself helps raise funds for local charities, including The Pathways Strategic Teaching Center, Misquamicut “Bring Back the Beach” Foundation, and numerous local school and sport programs in North and South Kingstown, RI.

Obstacles: A+ (difficulty level 3/5)  Many standard obstacles (walls, mud crawls, nets, etc) and many unique obstacles that I had not seen before.  The obstacles were all very well constructed; clearly not haphazardly thrown together.  All of them were well executed, and attainable for those in decent shape.  This is a beginner to intermediate course.

Venue/parking/festival: A  Parking close to venue, great festival atmosphere, plenty of vendors, port-a-potties, etc.   Free bag check, showers in parking lot.  Spectator fee was $5, but the spectators were able to see the start, finish, and one obstacle near the festival area.  Further, spectators were able to walk about 200 yards uphill to a huge field that contained NUMEROUS obstacles.   A kids race was also available, that appeared to run at various times throughout the day, and finished in the same mud crawl as the adults (though kids were kept to one side).

Race Staff/Volunteers : A+  The volunteers and the National Guard (who manned the obstacles) were super friendly, motivating, and attentive to racers and obstacles.

Food/Beverage: B  Water given to finishers.  One free beer (Bud or Bud lite) for all racers over 21, then Bud, Bud Lite, or frozen adult beverages available for purchase. Didn’t get a good glance at the food selections (it was too early for lunch for us) but I did see them grilling burgers.

Geoff and I arrived early for our Sunday morning wave, and had no trouble parking.  The typical fee, $10 (or $5 if you had more than 3 people in your car, three cheers for carpooling) got you a parking spot within a 1/4 mile of the event, and the best “paid for parking” ticket I’ve ever seen: an air freshener.  Seriously, my car smells awesome right now (and that poor thing, affectionately known as the “Spartan Mobile”, typically smells like mud, sweat, and dirty shoes.) 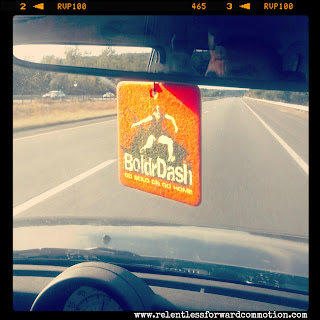 We parked, walked down the hill to the ski lodge, and zoomed right through registration.  We were asked at the gate if we intended to drink after the event (all racers over 21 are given one free beer). When in doubt, always say yes, and after a quick ID check we were given our wrist bands.    First stop inside: t shirts (a simple, orange cotton t shirt with the logo on front and back.) Second stop: bag check.  It was FREE (always a nice surprise), and not only that, but they put your bag in a garbage bag, which post race, is an excellent place to store your muddy, wet gear.  Such a simple yet incredibly practical idea.

Surrounding the lodge area was the start line, the finish line, the kids race, food and drink vendors, a band, the DJ, numerous local vendors (think: physical therapy, local gyms, massage therapists, REI who had an entire foam rolling station set up, etc) the National Guard with a huge rock climbing apparatus, and a view of one of the more unique obstacles (more on that).  The music was just loud enough and there was a great vibe in the air.

Now let’s talk about this new theme in the obstacle course racing world: events set on ski mountains.  I mean really, if you aren’t training on hills already, this new “trend” is going to eat you alive.  So of course it was no surprise to me that the race started UPHILL.   We lined up with the second wave of the day (9:15 am) and when we were given the count down, started running uphill.

As with all of my reviews, I’m not going to give you the play by play of EVERY obstacle, because a) you should be prepared for ANYTHING when it comes to OCR, b) the element of surprise is half the fun, and c) I can never remember all of them.  But here are some highlights:

But the highlight for me was a FIELD FULL of obstacles towards the end of the race.  You came out of the woods to a wide open field that was just one obstacle immediately after another, with National Guardsmen yelling and encouraging you the entire time.  Climbing over tires, up slippery walls, tire swing gauntlet, down a slip and slide, through a tire gauntlet, chain carry/run, giant wall, another tire field, carrying/dragging tires…I’m sure I missed something.   It was exhausting and totally fun.

Hilarious Heather side note:  I ran at the slip-n-slide and went down face first, “super man” style.  After Geoff went down the slide, and we started running again, I kept feeling this pinching pain in my abdomen. I finally looked down to discover that a safety pin from my bib had not only broken, but now was completely lodged into my stomach. That’s right, I PIERCED myself with a race bib.  I pulled it out, and 48 hours later, it has almost completely healed.  Good times. 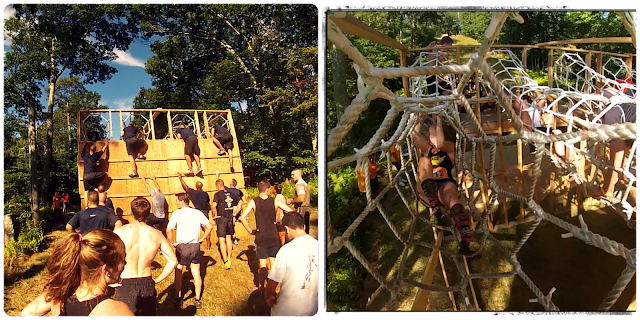 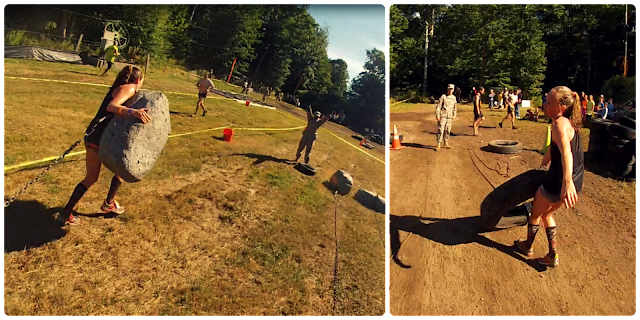 Side note: there were photographers on hand, and while they don’t provide free photos like some of the larger race events do, the company was kind enough to provide “embeded” links, like the one shown below, for free (obviously with copyright info on top) so you can at least share with friends and family.

The second to last obstacle of the day: potato sack jumping.  It’s exactly what you think: get in the potato sack, jump about 50 feet to a tire, jump around it, and back to the start.  I’m not even kidding you when I say, this is FAR HARDER THAN IT SEEMS when you are 3 miles in to a relatively hilly obstacle course race. I’d say that was honestly the hardest obstacle of the day for me.

Finally we ran down the hill back towards the festival area, for the obligatory mud crawl right before the finish line.   Plenty of cheering spectators, volunteers, and a photographer at the end made for an enjoyable and entertaining finish. 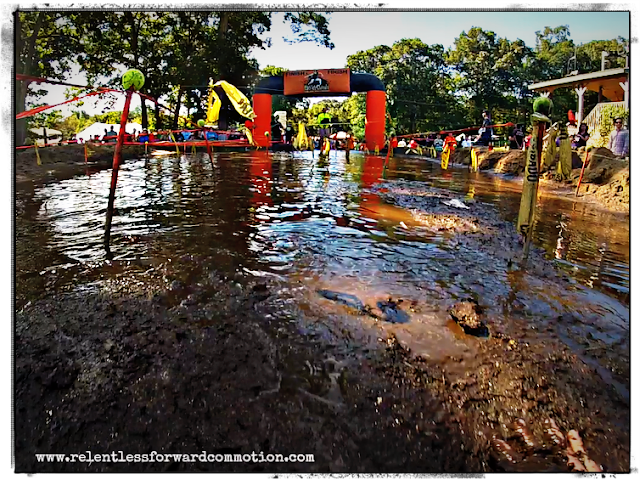 We were handed medals and bottles of water at the finish line, and were only about 100 feet from the bag check.  At the time, I did NOT notice that there were showers in the parking lot, but we were able to find a sunny corner to clean off with towels. I would have liked to have seen changing tents or more obvious signs for the showers (though that could have been my oversight?). Instead we ended up changing in the port-a-potties (at least they were clean!)

We then grabbed our free beer, sat and enjoyed the sun and the music, while discussing the race and how much fun we had.  Geoff ranked BoldrDash as one of his favorite races of the summer, and I would have to agree that it was certainly up there. While we weren’t there to compete or race for time, it was definitely still a relatively challenging race.  It was obvious that a lot of thought was put into the obstacles, instead of just the same handful of wall climbs and barbed wire crawls that you see in every other OCR.

I would absolutely recommend this race to ANYONE who lives in the RI area, and even to anyone who feels up for a bit of traveling.  We drove 3 hours to get to this race, and in my opinion it was worth the drive.  Specifically recommended to first time obstacle course racers, those looking to do a team event, or anyone looking for a family friendly atmosphere.  Great job BoldrDash, and thank you, we truly had a blast.