After a solid performance at the Urbanathlon last weekend, followed by a 2nd overall placing at a local 5k the weekend before, I was feeling pretty stoked to be back in the swing of running, since we had spent all summer and early fall climbing mountains.  When Geoff and I stumbled upon another local fundraiser race, the Guilford VT Creepy Crawl 5k, I looked forward to the prospect of really pushing myself and racing once again.

But then winter arrived.

Seemingly overnight at that.   I woke up this morning, opened my eyes, and saw (thanks to daylight savings!) the trees whipping around in the backyard.  It didn’t look promising, but from the comfort of my warm sweatpants and Snuggie

Until I made the mistake of looking at the weather forecast.

I made every attempt I could to jokingly whine about not wanting to go, secretly hoping Geoff might suggest we stay home instead.   No such luck; he didn’t even cave when I stomped in jest to the bedroom to pick out a new race outfit, as the shorts and knee socks I had picked out the night before clearly weren’t going to cut it; bring on the thermal tights.

Decked in full winter race regalia, we showed up to the Guilford Central elementary school for the race.  Registration was thankfully inside, as were some actual bathrooms (as opposed to porta-potties) for us to use. 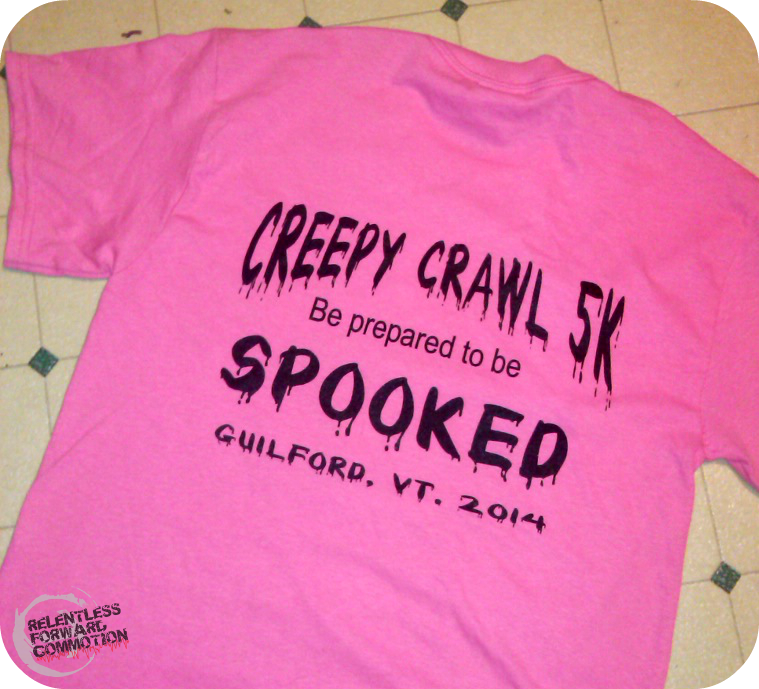 We were given a choice of t-shirt colors. Instinctively, I suppose, I went for pink. Some habits die hard.

The race field was small, maybe 50 people, including a handful of little kids.  Almost EVERYONE was in costume, which made me feel like a bit of a killjoy as I was not, but I took solace in the fact that I was wearing my The Blerch shirt.   That little guy is kind of creepy.

After I checked in, I left Geoff in the car to stay warm; he wouldn’t be racing due to a still undiagnosed foot injury.  I took off for a half mile warm up, and then met up with some friends for the standard pre-race-chatter.   Rumor was, there would be a “big hill”.  My friend Katherine told me not to worry, after all, hadn’t we been climbing mountains all summer?   I wasn’t so sure.  In Vermont, if a “hill” is considered mention-worthy, it certainly is nothing to scoff at.

The start was as whimsical as the small town itself; everyone started gathering near the start line, so the man in charge took our cue, and said “oh, are you runners ready?  OK, well, on your mark, get set, GO!”.  I just barely caught Geoff limping his way from the car to the start line.   The start was a slight downhill on dirt road (in fact, 90% of the race was dirt road).  All of the little kids took off sprinting, which is always entertaining.  I heard their respective adults yelling up to them to pace themselves, and shouting reminders that they still had a long way to go.  I was thankful for the slight downhill, as it gave my body time to finish warming up while still putting out a significant pace.

My number one goal I had set for this race, thinking of course that I was somewhat flat and a road race, was a sub 23:00 5K.   My number two goal, as stated boldly on Facebook the night before, was to “beat all those other girls”.   And for the first half mile, I comfortably ran side by side with the other leading female. 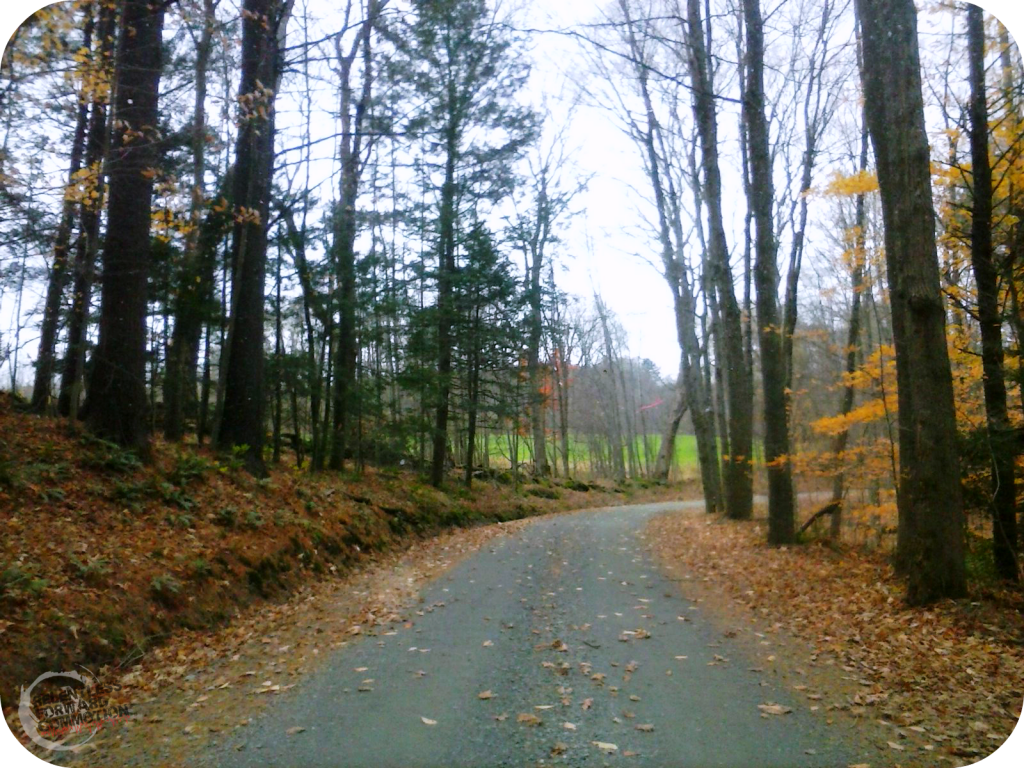 Taken on a post-race-drive along the course.

And then we hit THAT hill.

You know those sneaky hills that hide their true distance and inclines around multiple blind corners, so that every time you think you’ve reached the top of the hill, you come around a bend only to see the hill keeps going?  It was one of those hills.   Up, up, up we went.  The girl I ran side by side with took off steadily, while my legs increasingly slowed down and my lungs started screaming.   The hill was well over half a mile long of twists and turns.  At one point, we hit the first water stop at the first mile marker, and I just knew that had to be the top of the hill.  But, surprise!  Or no surprise, really…90 degree turn to the left and the damn hill kept going.

I had to stop and walk.  More than once. I hate stopping to walk during a 5K, as they are so short.  But if I’ve learned anything over the past few years of battling hills, it’s that *my* body responds far more positively to a quick walk break, and thus I actually end up with a faster climb than if I ran the entire thing.   So walk I did, a handful of times, each time looking over my shoulder to see who, if anyone, was coming up behind me.   I could see my friend Katherine, dressed epically as Johann Sebastian Bach, coming up a few hundred yards behind me.   Thankfully and finally, I crested that hill, and was ready to gain some speed and distance on the downhill.  I glanced at my GPS to see I was currently at a total average pace of 8:43/mile for the 1.6 miles thus far.  This was a long shot from my goal, so I had some serious time to make up. 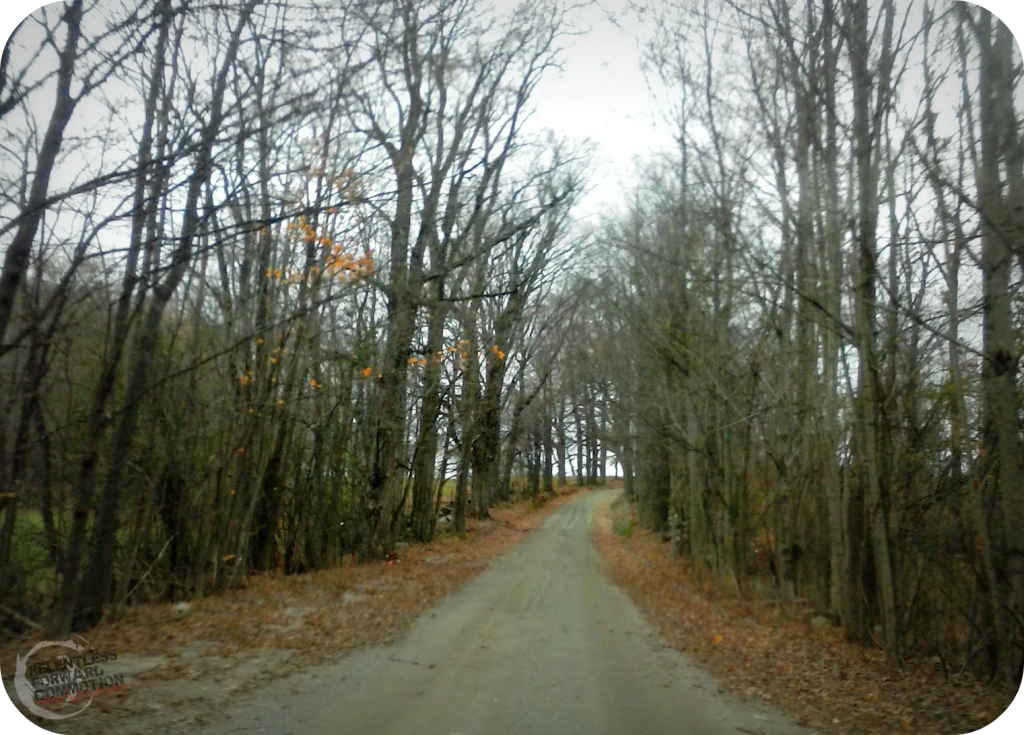 Now, completely sucking wind from that hill, was the most fitting time to pass a dairy farm, with a massive herd of cows just feet away from the road.  I find those smelly beasts to be quite adorable, and for a second I wished I wasn’t racing, so I could take some instagram-worthy cow selfies, or as I’ve most recently learned, is referred to as a “felfie” .  I tried my hardest to maintain a steady recovery breath as I sprinted down a long hill inhaling the overwhelming smell of manure.    As I approached  the second water stop,   I was greeted by a stumbling zombie in the middle of the road.  I yelled to him that after the hill I felt like death was coming for me, and ran on…no time for water breaks.

Another 90 degree turn, past an old brick building with an adorable little “ghoul” and her dad hiding behind it.  I heard him whisper “go get her” and I tried my best to play the terrified runner as she jumped out at me, cloaked in a blue ghost costume.  Up a slight hill, another 90 degree turn onto the main road.    We passed water stop #3 in a parking lot at the town grange.  For such a small race, they really outdid themselves with aid stations!

Finally, the last 90 degree left turn to complete a full circle, and we started climbing the hill back to the school.  Though this last hill was not steep nor long by any means, it hurt.  I could see the finish line ahead, but suddenly felt my stomach lurch and my mouth water.  I’m familiar with with the old adage of “leaving it all on the course” but I didn’t actually want to leave it “all” on the course, at least not my stomach contents.   At this point I instinctively, and probably slightly panicked, glanced behind me.  A guy walking down the hill past me, laughed, and said “don’t worry, their not going to catch you!”   Stomach heave slightly subsided, I continued on towards the finish line.  This time, a solid effort but not a full-finish-sprint. 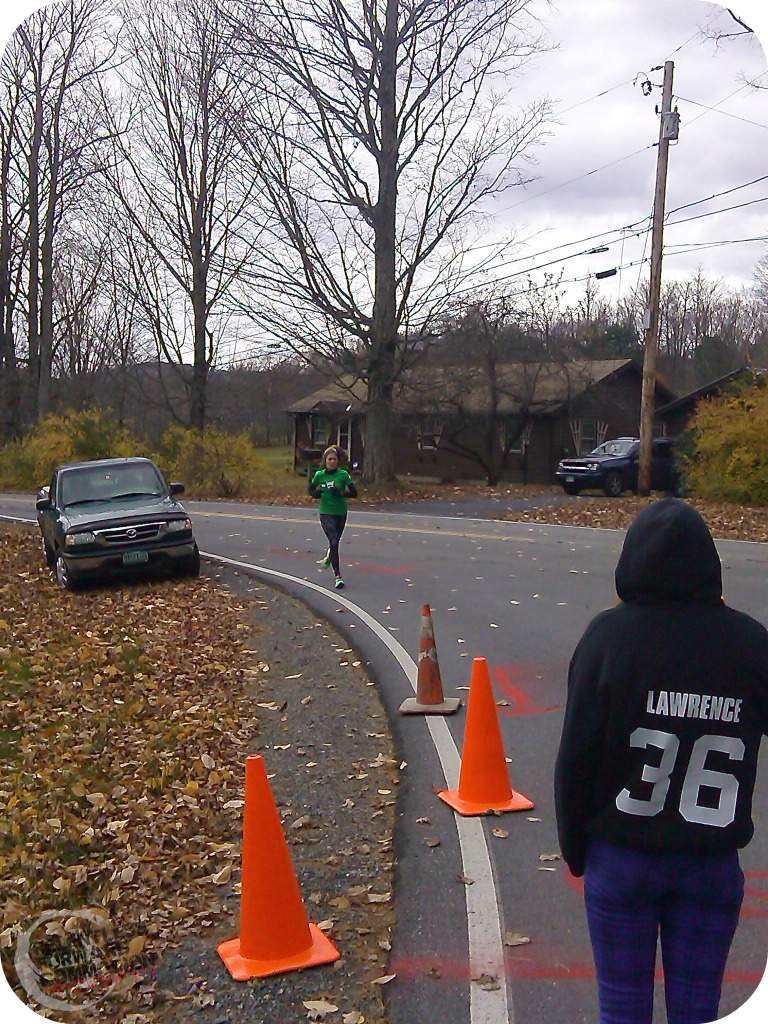 Solid, but semi slow push to the finish.

I crossed the finish line and was handed a popsicle stick with the number “6” on it, for 6th place overall.  No other females had passed me, so I knew I secured 2nd place female with a time of  23:14.  At an average pace of 7:28 I had made up some SERIOUS time on those downhills.  So much so that I was still pretty sure I was going to toss my cookies.  Therefore, I couldn’t stand still even for a second for Geoff to take a proper finisher’s picture.  Thus I present you, no-head Heather. 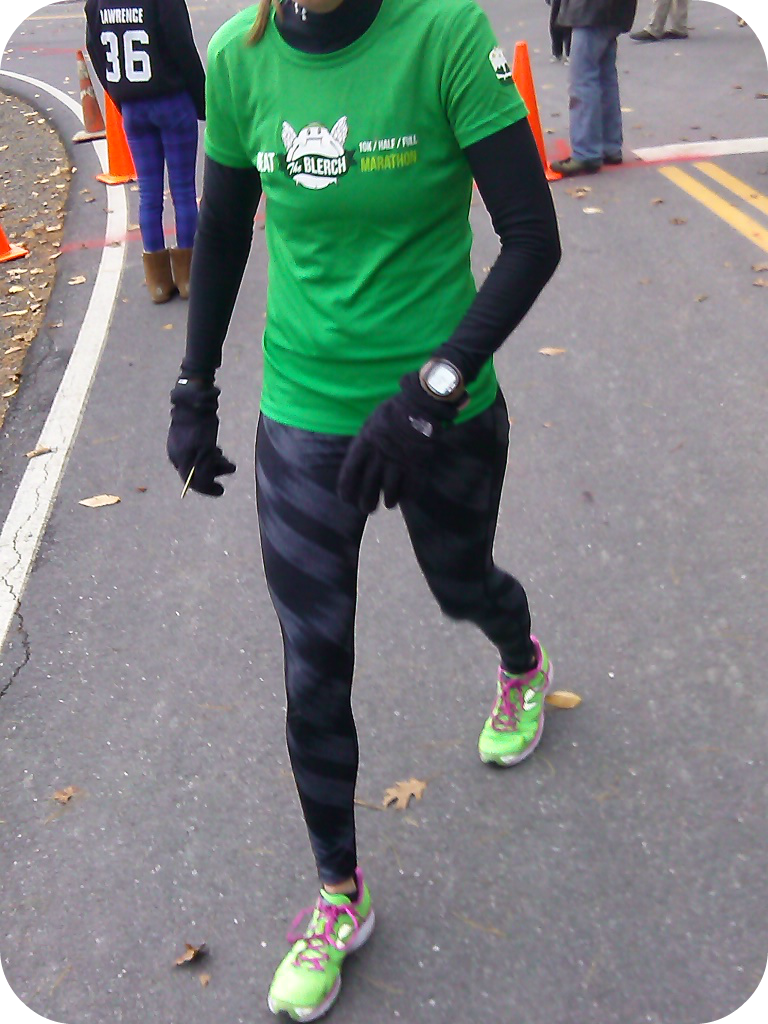 Headless-Heather *is* my Halloween costume!

I eventually caught my breath, put my sweatshirt on, and then told glorious fables of the ridiculous hill, which now had grown in my mind and stories from just over half a mile to at least one and a half miles, or at least it felt like it.   We stood around cheering other finishers in, and eventually I turned in my Popsicle stick for an official finish time. 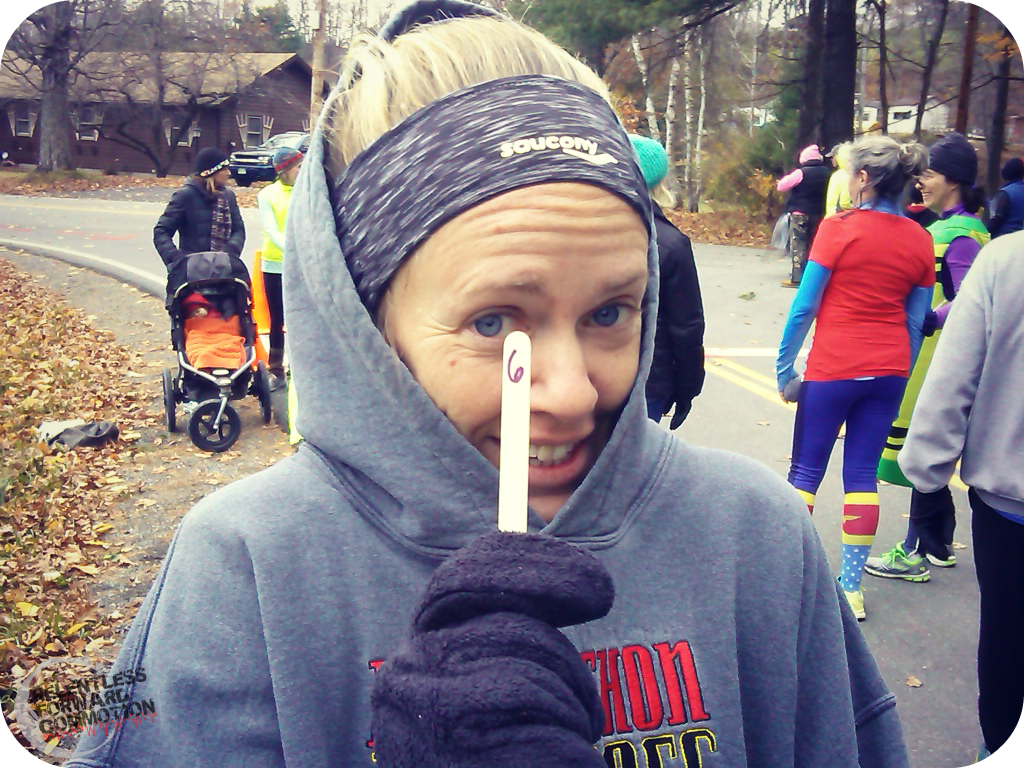 When the shivering could no longer be tolerated, we headed inside the school to refreshments of Vermont Cabot cheese, granola bars, and bagels in the cafeteria.  I was also able to pick up my award for top finishers: 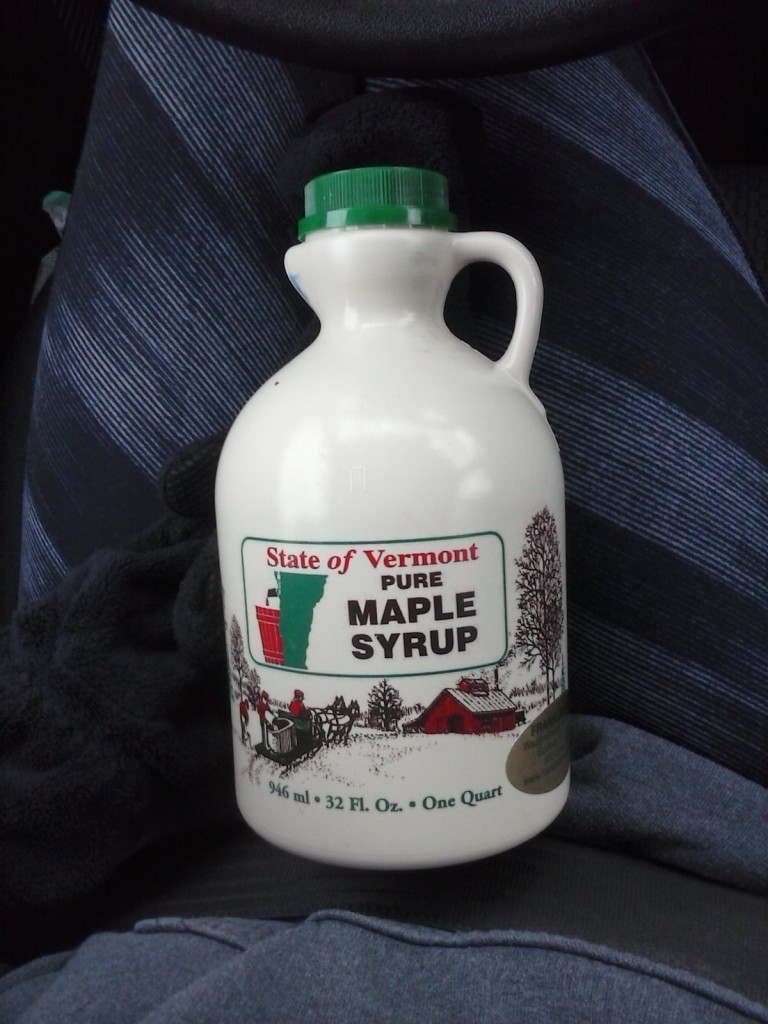 I love medals and trophies probably far more than I should, but I LOOO-OVE maple syrup.  And a quart of the good stuff is as coveted as gold around these parts.

In the end, I was happy that Geoff didn’t cave to my mostly-joking-but-kind-of-serious pouting about the weather, as I ended up with a killer workout on a fun course…AND maple syrup!  (But no felfie…you can’t win em all.) Thank you to the Guilford Central school for a fun morning!